Since May 12, former Folsom football player Dylan Richard has been in a hospital after suffering a traumatic brain injury while skateboarding in El Dorado Hills. Richard spent the first three weeks at UC Davis Medical Center and the last six at Kaiser Permanente Medical Center. On Wednesday morning, Richard […]

Since May 12, former Folsom football player Dylan Richard has been in a hospital after suffering a traumatic brain injury while skateboarding in El Dorado Hills.

Richard spent the first three weeks at UC Davis Medical Center and the last six at Kaiser Permanente Medical Center. On Wednesday morning, Richard left Kaiser to be transported to Craig Hospital via air ambulance. Craig Hospital is located in the Denver suburbs and specializes in TBI injuries.

His mom, Cindy Manzo, joined him on the ambulance flight to Colorado.

“I’m so super excited,” Manzo said. “Super excited that we are out (of Kaiser). He needs that level of care and focus. I’m super excited he’s finally going to Craig Hospital.”

Only two visitors per patient are allowed at Craig Hospital due to COVID-19 restrictions. Cindy Manzo and Dylan’s dad, Paul Richard, will switch off every two weeks so someone is with their son at all times.

Dylan’s older sister Gabby also went on the trip to Colorado. She plans to stay the full 60-75 days — which is the amount of time typical patients stay at that hospital.

While Dylan is in Colorado, he will have surgery to replace his skull flaps that were taken out when he first suffered the injury — which could extend the amount of time he is there.

How Dylan got to Craig Hospital

It took an online petition, community support and a lot of convincing, but on June 25 Dylan was finally referred to Craig Hospital by Kaiser, his insurance company.

His family started the petition on June 17 with the hope of catching Kaiser’s attention, so he would be sent to the hospital for rehab. The petition was successful, but other families with loved ones with TBI injuries didn’t have similar success. His family has been in contact with other families of kids in California that suffered a similar injury and weren’t referred to Craig Hospital.

“I have heard stories of other families in California who struggled with their insurance and wanted to go to Craig Hospital,” Paul Richard said. “We are so happy Dylan is going and we want to help other families in any way we can. I won’t really be relaxed until Dylan is in the door at Craig. Since Kaiser approved Dylan to be transferred to Craig, they have been great.”

“The support has been humbling,” Paul added. “We are not the type to ask for help but when we needed help, everyone stepped up.”

The petition gained nearly 3,000 signatures and even caught the attention of Sacramento native and San Francisco 49ers defensive lineman Arik Armstead, who shared the petition to his Instagram story.

One of Dylan’s best friends, Lucas Springer was there the night of the skateboarding accident. He’s been alongside Dylan during his journey by visiting and video calling him.

“It shows how tight-knit the community is,” Springer said of Armstead showing support to Dylan. “His family and friends appreciate everyone supporting him. With someone like Arik Armstead, who’s from Sacramento (sharing the petition to his Instagram story) it was amazing. When Dylan makes a full recovery, he’s going to realize how many people care for him.”

Making progress while at Kaiser

Since he arrived at Kaiser in early June, Dylan has made significant progress.

When he first got to the hospital, he couldn’t lift his head up — now he can eat food and sit on the edge of the bed on his own for a few minutes at a time. He even showed his competitive spirit in a game of Connect Four with his family.

“He was so wide awake today,” Manzo said. “The prognosis we got when he was at UC Davis was he might never see, might never be able to speak or move or wake up. These are the things they told us and I can’t even begin to tell what it does to you. Hearing those things were scary and alarming. What he is doing right now was (the doctors) best-case scenario — and he’s not even through the rehab.

“I’m so happy with how he’s progressing,” Manzo added. “I think it has a lot to do with his age and strength because he was so athletic. With the strength and rehab from Craig, it’s going to go even further from there.”

Springer added, “I feel amazing and ecstatic that he’s going to get the best care possible. Anything to make the odds better so that he can make a full recovery is good.”

What is the #FreeBritney campaign and what does conservatorship mean?

Wed Jul 22 , 2020
Britney Spears at a movie premiere in Hollywood, California on 22 July 2019: VALERIE MACON/AFP via Getty Images Fans of Britney Spears are using the hashtag #FreeBritney to demand that the singer is given control over her career and personal affairs. Spears, 38, remains under a legal conservatorship which renders […] 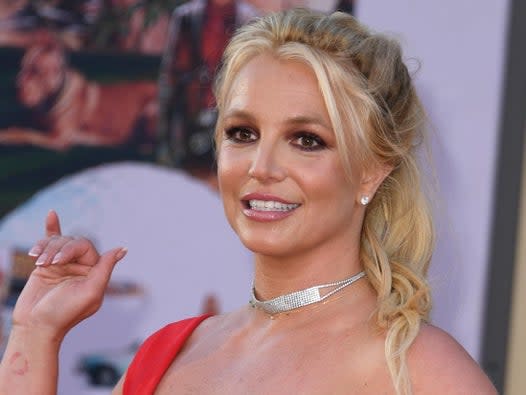