After being arrested for protesting in support of the rights of Black trans and gender-noncomforming people, two transgender women say they found themselves facing the same type of discrimination they were rallying against. Gabriela Amaya Cruz and Jae Bucci were two of more than 30 demonstrators who were taken into […]

After being arrested for protesting in support of the rights of Black trans and gender-noncomforming people, two transgender women say they found themselves facing the same type of discrimination they were rallying against.

Gabriela Amaya Cruz and Jae Bucci were two of more than 30 demonstrators who were taken into custody at a July 19 protest in downtown Miami, where all participants were charged with obstructing the roadway. Both women say Miami-Dade corrections officers threatened to jail them with men and repeatedly interrogated them about their private body parts.

“My genitals were just a topic of conversation throughout most of the night,” Cruz said, “It’s disgusting that genitals at the end of the day are the only validation in their eyes of what it means to be female.”

Their experience at the Turner Guilford Knight Correctional Center underlined the conflict between how members of the LGBTQ community define themselves and how the criminal justice system classifies transgender people based solely on their sexual parts. Neither woman has had gender-confirmation surgery, but both identify as women.

Miami-Dade Corrections and Rehabilitation Department spokesperson Juan Diasgranados would not comment on the two women’s allegations of mistreatment but confirmed it is jail policy to take genitalia of a transgender person into consideration when deciding where to place them.

“A transgender inmate shall be classified and housed based on housing availability, safety/security needs, and his/her gender identity and genitalia,” he wrote in an email. “Inmates with male genitals shall be assigned to male housing. Inmates with female genitals shall be assigned to female housing. A transgender inmate may be housed in general population or administrative confinement.”

Diasgranados wrote that MDCR has procedures in place for intake, housing and medical needs of all inmates, including transgender inmates. During the “classification interview” process, he said MDCR staff also does an assessment to determine if a transgender inmate has a history of sexual assault or being sexually victimized.

But he said Bucci and Cruz never actually made it to cells and were only held in TGK’s open booking area.

“All inmates (male and female) undergoing our intake process remain in an open seating (open booking) area in the presence of correctional staff,” he wrote.

Casey Bruce-White, spokesperson for the American Civil Liberties Union Foundation of Florida, told the Herald that such treatment is common.

“Too often, transgender people of color and transgender women are disproportionately subjected to harassment and discrimination during the booking process,” Bruce-White said. “Law enforcement must commit to practices that will protect and respect all people, regardless of gender identity.”

She said state and federal prohibitions on sex discrimination prohibit discrimination of transgender people and that an officer should not inquire details about an individual’s anatomy, medical history or conduct a search to determine a person’s gender.

“Trans people are exposed to overwhelming levels of abuse and harassment while behind bars and they are far more likely than cisgender people to be targeted for the worst types of violence and mistreatment,” Bruce-White said.

After a peaceful march at the Torch of Friendship advocating for black transgender rights, Bucci and Cruz were arrested and eventually brought to TGK, the county’s main jail.

For Cruz, who had never been arrested before, a night of protest that first felt “empowering” soon turned into a “dehumanizing” experience.

At TGK, Cruz and Bucci said they were constantly questioned by corrections officers about the validity of their gender identity.

Cruz had to repeatedly tell officers she identified as a woman, including when two men wanted to conduct her frisk search. Same gender staff are supposed to conduct frisk searches based on the self-identification of a transgender women, MDCR spokesperson Diasgranados said. Cruz had to keep stating she was a woman as officers continued to question her about her sexual parts.

When Bucci arrived at TGK, she said officers also began to question her womanhood. After her mugshot was taken, she said a female corrections officer took off Bucci’s face mask she wore to prevent spread of COVID-19 and began inspecting her features. The guard asked Bucci why her voice was so deep for a woman.

Bucci was taken to the female ward of the jail to undress in private. She asked the officer if she could keep her underwear on because they are special undergarments meant for tucking her genitalia.

Bucci said the officer then said “I knew it, I could tell by your voice. That’s what I was looking for.”

“If I wouldn’t have spoken up,” Cruz said, “I would have been held with the men and that would have made me feel so unsafe and so uncomfortable.”

While Cruz has not changed her sex on legal documents such as her driver license, Bucci has gone through the legal process of changing her gender.

But after Bucci had already filled out intake forms, a corrections officer said they would change it all to state that she was a man. She told the officers she legally was female and that her license proved that, but to no avail. This paperwork change is reflected in the charges filed against Bucci — in the criminal case docket for her charges online, Bucci is listed as male.

“I am disgusted with how they handle things,” Bucci said. “They have no standard for trans people. To get your sex marker changed, to be considered to have had a sex change, you either have to get surgery done or you have to be on hormone therapy for a few years. So who taught them, who trained them?”

After being held with women for a period of time, Bucci was told by a guard to go and sit with men. She declined. Then, she said a guard said to her: “You are trans, you have a dick, you’re still a man. You have not cut it off, so you are still a man, until you remove that you are a man.”

The guards told Bucci that her genitalia posed a threat to other women if she were to be held with them, she said. A guard told her: “You know you’re not a woman, you know it.”

Bucci was then given an ultimatum: sit with the men or be put in solitary confinement. Feeling she would be unsafe if she was held with men, Bucci chose solitary.

She remained in solitary until around 9 a.m. when she was brought back to the general population. There, she said a guard outed her as a trans woman in front of other officers and male inmates. She said she saw some men laugh at her and grab their crotches while staring at her.

When both Cruz and Bucci were getting released, guards told them they could not leave the jail wearing the clothes they came in with because they were women’s clothes.

One guard told Cruz she had to wear unisex clothes the jail provided because she didn’t want to be embarrassed when she brought her to be discharged downstairs.

Bucci said an officer told her “We have policies, you are a man leaving prison so you cannot wear women’s clothing, you are a man, we don’t allow cross dressing.”

MDCR spokesperson Diasgranados said all inmates are released with a unisex release uniform as their personal clothing has been placed into property. He did not answer a follow up question as to why Cruz and Bucci were actually given back their clothes, but not allowed to wear them.

Cruz said the whole experience at TGK made her feel “erased.”

“I felt completely dehumanized and very embarrassed with how I entered the jail versus how I left the jail,” Cruz said. “I think there has to be more education on LGTBQ+ folks that enter the jail. “

Bucci said she will be taking a civil action lawsuit against TGK for their treatment of her.

“How can you force me to sit with men if my sex says female? That doesn’t make any sense,” she said. “They need to create a standard on how to handle or treat trans people. They cannot just put us in solitary, that is not okay.”

Viola Putx, 21, also attended the protest that day and was arrested and brought to TGK. Putx, who performs in Miami as a drag queen, said she witnessed the “horrible” treatment Cruz and Bucci faced.

“I was seeing the system firsthand that I was actually protesting against,” Putx said. “Personally it was a very rough experience seeing all that terror and all that energy off of the staff. Everything was just so wrong.”

Fri Aug 14 , 2020
British holidaymakers are racing back from France today to avoid the two-week quarantine that comes into effect at 4am on Saturday. They face paying hundreds of pounds to make a quick exit from the country with the cheapest ticket on a Eurostar train from Paris to London going for £210 […] 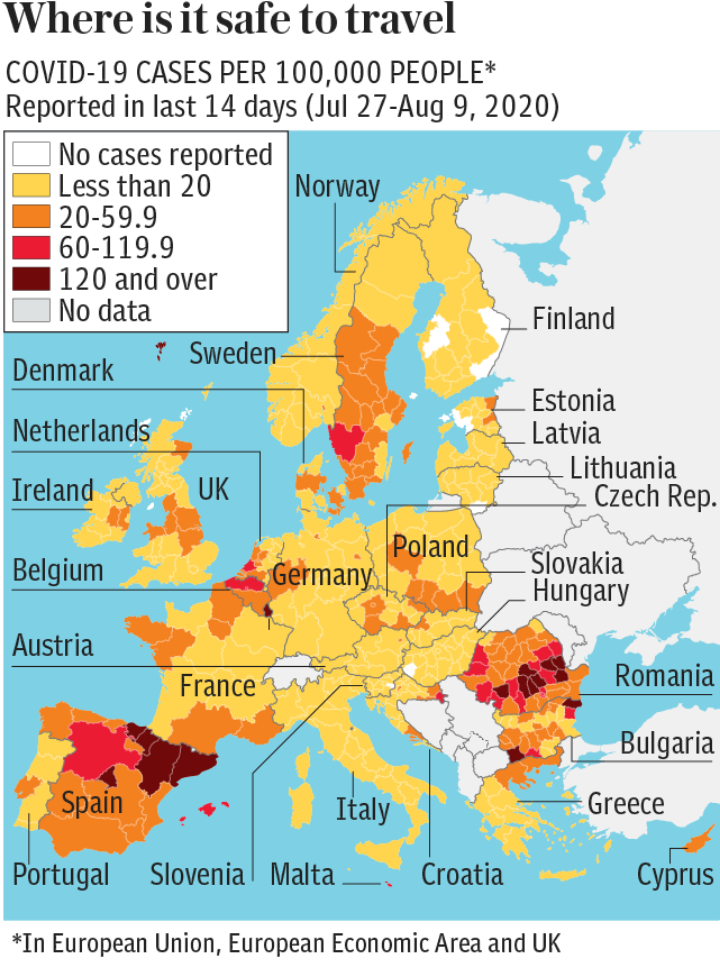