As wildfires and storms raged, and even the Arctic broiled and burned, scientists’ dire climate warnings came to life in frighteningly vivid fashion in 2020. With political leaders and the public preoccupied by COVID-19, the world careened closer to the brink of environmental catastrophe. When 2020 began, a youth climate […]

As wildfires and storms raged, and even the Arctic broiled and burned, scientists’ dire climate warnings came to life in frighteningly vivid fashion in 2020. With political leaders and the public preoccupied by COVID-19, the world careened closer to the brink of environmental catastrophe.

When 2020 began, a youth climate movement was gaining traction, a key summit in Glasgow, Scotland, looked like a chance to breathe new energy into the Paris climate agreement as it neared its fifth birthday, and many hoped this might be the year leaders finally moved with the urgency the planetary crisis demands. The stakes were momentous ― every day without action, the window to prevent catastrophic climate change narrows. “This is really a minute to midnight,” said Inger Andersen, director of the United Nations Environment Program (UNEP).

Yet hopes that 2020 would be a pivotal year for climate action evaporated as COVID-19 upended governments’ priorities. Summits were put on hold and climate action dropped down political agendas.

As the year ends, the possibilities it offered seem to have drained away ― or at least, like so much else in this virus-plagued year, been postponed. And with unprecedentedly rapid action needed to avoid the most disastrous scenarios, the consequences of the lost focus, missed chances and lurches backward could be grave.

Andersen offered a chilling assessment of where things stand. Without a course correction, she said, we’re heading for 3.5 degrees Celsius of warming by century’s end, a catastrophic level scientists say would drown some coastal cities, intensify heat waves, droughts and floods, and make swaths of the world all but uninhabitable, driving hunger, disease, conflict and migration.

To turn that around, fossil fuel production must drop by 6% a year for the next decade, UNEP reported. Yet countries are still planning average annual increases of 2%, it said. And so far, the 20 biggest economies have poured $233 billion of coronavirus spending into boosting fossil fuels, compared to $146 billion for renewable power, energy efficiency and carbon-cutting areas like biking and walking infrastructure, according to the report.

But it’s not over yet. A fresh round of recovery packages is likely to provide one last, can’t-miss opportunity to change course in 2021, Andersen said. If they’re deployed wisely, the new economic recovery funds many countries are planning could help put the world on a more sustainable path, and limit warming to the 1.5 degrees Celsius envisioned in Paris. “It is unheard of, the kind of monies we’re putting into the economy,” she said. “For goodness sake, let us not waste this opportunity.”

President-elect Joe Biden’s victory means the United States will likely become an ally, not an obstacle, to climate progress. And more nations committed to slash net carbon emissions to zero by mid-century. Those promising to do so now include the European Union, Japan, South Korea, Britain and Canada.

But while far-off goals are laudable, they mean little without specific plans to cut carbon now, said Elizabeth Sawin, co-director of the think tank Climate Interactive. “It’s like saying you’re going to run a marathon in a year,” she said. If you’re serious, you’d better start training tomorrow.

In one key area, we’re clearly running in the wrong direction. This year brought a painful moment of reckoning on deforestation. Back in 2014, multinational companies, financial institutions and governments pledged to end deforestation for products like palm oil, soy and beef, and to halve forest loss overall by 2020, with the ultimate aim of halting it altogether by 2030.

That first milestone has come and gone. “No company, not even the best leaders, not even those in the forefront, have achieved the goals,” said Niki Mardas, executive director of Global Canopy, which tracks the market forces driving deforestation. Instead, the rate of tropical deforestation has accelerated  by more than 40% since the deal was forged, and 2020 brought the most rapacious destruction of the Amazon in more than a decade, he said.

“In the world of corporate commitments, it was the year the emperor’s new clothes were made visible,” as it became undeniable that voluntary pledges were not enough, Mardas said.

Political action on deforestation has been sorely lacking, especially in Brazil, home to around 60% of the Amazon. President Jair Bolsonaro’s government has ignored illegal seizures of public land and gutted the regulatory agencies meant to stop it.

Change will have to start elsewhere. And it is. Slowly. Indonesia is beginning to clamp down on forest destruction, although it is still widespread, Mardas said. In Britain, lawmakers are drafting a loophole-ridden, but still fixable, bill, designed to reduce deforestation from its supply chains. The European Union is consulting on a strategy with the same goal.

One way campaigners have sought to push change is by tracking not only the food, consumer products and paper companies whose goods come from cleared woodland, but also the sources of the more than $1 trillion in financing enabling the destruction, Mardas said. “It’s in our investments, our pensions. We’re all part of a deforestation economy.”

The same applies to fossil fuels. And this year campaigners turned up the pressure on those funding drilling, mining, pipelines and other carbon-intensive infrastructure.

Since the Paris Agreement, 35 banks — many of which say they support the deal ― have together poured $2.7 trillion into the fossil fuel industry, a coalition of climate groups reported. “That financing has actually gone up each year,” said Ben Cushing, head of financial advocacy at the Sierra Club and a steering committee member at Stop the Money Pipeline, a new campaign targeting the sector. It’s “enabling further expansion of the fossil fuel industry at the exact moment, or past the moment, when we need to be responsibly winding down the production” of oil, gas and coal.

Campaigners’ pressure ― along with economic forces roiling big oil and gas companies ― have brought some small steps in the right direction. In the past year, the six biggest U.S. banks joined international lenders in vowing not to finance Arctic drilling. Some banks have sworn off or restricted funding for extremely high-carbon sectors like coal and oil from tar sands. Such successes are “one of the bright spots of the climate movement in 2020,” Cushing said. Now, banks must accelerate that effort, and “recognize that at this stage in the climate fight, all fossil fuels are risky and extreme.”

Campaigners and nonprofits are also targeting insurance companies whose policies enable fossil fuel development and giant asset managers such as Vanguard and BlackRock, which Cushing said have failed to use their immense influence to push for decarbonization by companies whose stock they hold.

In January, BlackRock chief executive Laurence Fink wrote in his annual letter to CEOs that climate risks would reshape finance. But while the company promised to prioritize sustainability, its pledge contained wide gaps. A coalition of environmental groups reported BlackRock is the largest investor ― to the tune of $110 billion ― in a dozen oil, gas and coal projects the campaigners said would collectively emit three-quarters of the greenhouse gases allowable if warming is to be held to 1.5 degrees Celsius.

A Rough Ride For Oil And Gas Companies

Despite the eye-popping amounts of money still flowing, it was a rough year for fossil fuel producers, some of which struggled to stay afloat as oil prices crashed.

“It was sort of like draining a lake, and then we could see what was on the bottom,” said Amy Myers Jaffe, director of the Climate Policy Lab at Tufts University’s Fletcher School. It turned out many companies were unprepared, and investors who know any meaningful climate action will tank oil and gas demand permanently are growing increasingly wary of the industry, she said. With wind and solar power cheaper than ever, “the long-term trend is much clearer now than it was,” Jaffe said.

Among those clocking fossil fuels’ trajectory of decline was New York state’s pension fund. It delivered a major blow to the industry in December when it became the largest pension fund and the first U.S. state to announce it would pull out of fossil fuels — albeit gradually.

Oil and gas companies face social and political headwinds too. The Twitter blowback was fierce when Royal Dutch Shell asked, “What are you willing to change to help reduce emissions?”

I’m willing to hold you accountable for lying about climate change for 30 years when you secretly knew the entire time that fossil fuels emissions would destroy our planet 😇 https://t.co/ekj1Va1Cp0

Rep. Alexandria Ocasio-Cortez’s (D-N.Y.) retort crystallized progressives’ push to spotlight the industry’s role in the climate crisis: “I’m willing to hold you accountable for lying about climate change for 30 years when you secretly knew the entire time that fossil fuels emissions would destroy our planet.”

Such framings matter, said Mary Annaïse Heglar, co–creator of the Hot Take newsletter and podcast. “For the longest time, it’s just been this faceless fight” against climate change. Now, “people know who the villain in the story is.”

There’s a tipping point to catastrophe. But we’re not there yet.

Already, 2020’s might-have-beens are fading into history, another year when political and corporate leaders failed to meet the moment’s demands. We know temperatures will keep climbing, not-so-natural disasters will keep coming and the need for swift action will only increase. All is not lost, and there is progress to build on ― new promises nations and companies must be held to, clean power that’s cheaper and more reliable than our dirty, old fuels, and the urgency that rises as the terrible reality of  climate change becomes ever more apparent.

“There will come a point where we won’t be able to pull it back,” said Andersen, the UNEP director. In her view, we’re not there yet, but 2021 could be the last, best chance to secure a livable future.

If there’s one lesson 2020 has taught, it’s “what happens if you don’t address a crisis when it’s small and manageable,” Sawin said, likening the pandemic’s exponential growth to an environmental crisis that similarly requires decisive action before the worst consequences materialize. “And boy, I hope the world can generalize from COVID and apply that learning to climate change.”

Beth Gardiner is the author of ”Choked: Life and Breath in the Age of Air Pollution.”

HuffPost’s “Work In Progress” series focuses on the impact of business on society and the environment and is funded by Porticus. It is part of the “This New World” series. All content is editorially independent, with no influence or input from Porticus. If you have an idea or tip for the editorial series, send an email to [email protected].

Cybercriminals want your holiday shopping money. Here's how to protect yourself

Sat Dec 19 , 2020
Former Toys ‘R’ Us CEO Jerry Storch assesses the state of retail on ‘Maria Bartiromo’s Wall Street’ As COVID-19 cases continue to rise across the nation, this holiday season undeniably feels a bit different. Rather than dashing to the stores on Black Friday, a recent study conducted by our firm, […] 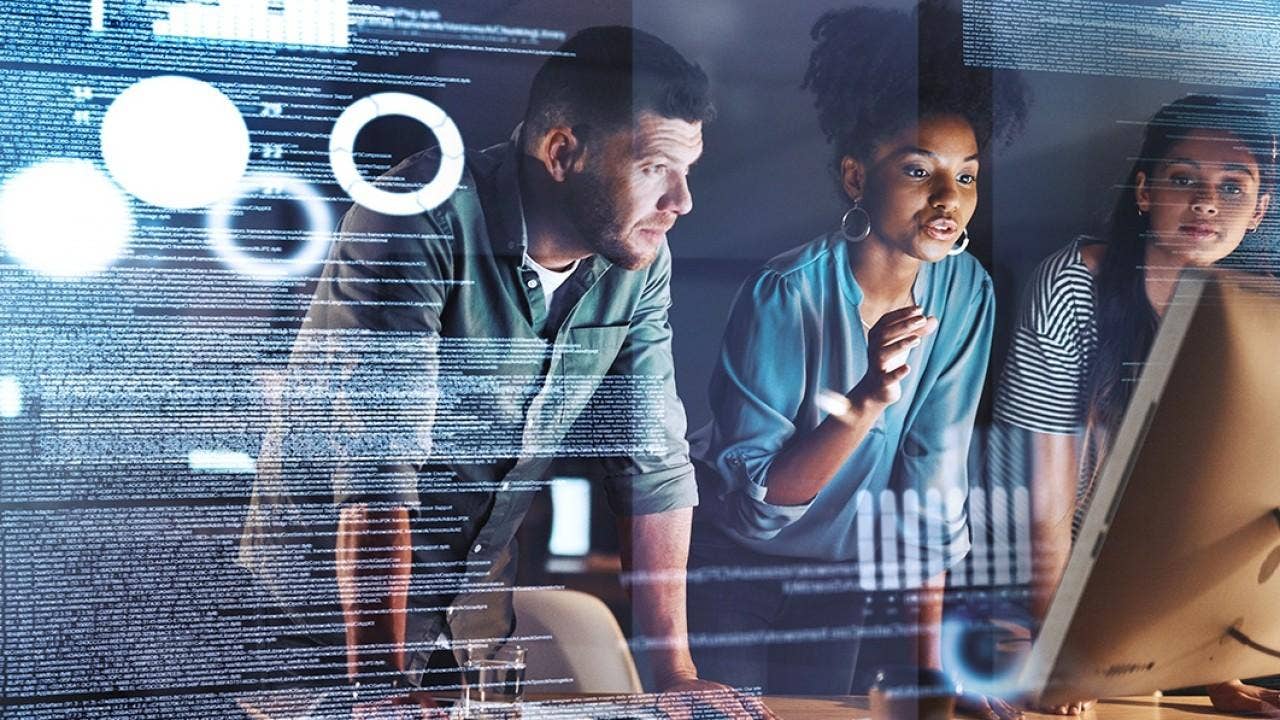