Framing his candidacy as a vessel of light meant to lead America out of its “season of darkness,” Joe Biden formally accepted the Democratic presidential nomination Thursday night, capping a more than three-decades long quest at an unprecedented convention transformed by the coronavirus pandemic. Pledging to restore core values like […]

Framing his candidacy as a vessel of light meant to lead America out of its “season of darkness,” Joe Biden formally accepted the Democratic presidential nomination Thursday night, capping a more than three-decades long quest at an unprecedented convention transformed by the coronavirus pandemic.

Pledging to restore core values like character, compassion and decency, the 77-year-old Biden drew an implicit contrast with President Donald Trump without ever uttering his full name.

“I will draw on the best of us, not the worst of us. I will be an ally of the light, not the darkness,” Biden told a convention hall in Delaware largely empty except for a handful of reporters and photographers.

The themes that Biden stressed in the most momentous speech of his career were not new, and they largely eschewed concrete policy promises. Instead, the former vice president assured voters he would above all be a healer and a uniter, punctuating a four-day virtual convention that was largely seen as a success for Democrats.

Here are six takeaways from the 2020 Democratic National Convention:

Biden aims for the middle

Biden’s acceptance speech — like so much of the messaging during the convention — was aimed squarely at moderate and Republican-leaning voters who are wary of Trump and his haphazard response to the pandemic, but unsure if they can ultimately vote for a Democrat.

In Biden’s telling, Trump’s divisive approach has failed a country in crisis — and it will take an elder statesman like him to unite the country and overcome its many challenges.

“That’s the job of a president. To represent all of us, not just our base or our party,” Biden said, in a speech that mostly avoided policy specifics in favor of outlining a bipartisan governing philosophy. “This is not a partisan moment. This must be an American moment.”

The way in which Biden delivered his speech might ultimately be as important as its content. In a race in which Trump and the GOP have characterized the Democratic nominee as a doddering old man in decline, Biden’s speech was forceful and effective, his voice rising to denounce what he saw as a president who had failed America in “unforgivable” ways.

“As president, I will make you this promise: I will protect America,” Biden said. “I will defend us from every attack. Seen. And unseen. Always. Without exception. Every time.”

Biden vaulted to a sizable national lead over Trump over the summer, after many moderate Republican and independent voters soured on the president’s response to the pandemic. With less than three months before Election Day, Biden’s appeal to a bipartisan spirit was a full-throated pitch to encourage them to stick with his campaign through November, even if many of them have misgivings about a progressive policy agenda.

Biden spent much of the post-primary spring and summer making an unusually aggressive effort to win over progressives and unite the party.

If the convention is any indication, his campaign is now entering a new phase — with a very different kind of voter in mind.

Across much of the four-night program, Democratic officials continually sought to elevate the voices of anti-Trump Republican politicians and regular voters who now support Biden. The procession of centrist praise — including a video tribute to Biden’s friendship with the late Republican Sen. John McCain and a speech from former Ohio GOP Gov. John Kasich — mostly emphasized that Biden was a decent and kind man, though Kasich notably added that the Democrat wouldn’t be cowed by progressive pressure, either.

Making the case that a presidential nominee is broadly popular is politics 101. But what made the rightward pivot conspicuous was the relative absence of moments making an equally strong case that Biden shared the values and goals of the party’s class of liberal activists.

Sanders, naturally, made the most direct pitch, listing a list of policy goals Biden’s presidency would achieve. But broad arguments that Biden would be a progressive champion were sparse.

The overall effect felt like a conventional pitch from a center-left Democratic nominee trying to build a winning coalition not by exciting his party’s base but winning over middle-of-the-road voters wary of Trump.

The procession of Republicans, of course, didn’t mean that Democrats ignored their base this week. It’s just that the primary message wasn’t about building Biden up — but arguing bluntly that a Trump victory could compromise the foundations of American democracy.

In some of the convention’s most stark and memorable moments, speakers like Sanders, Michelle Obama, and Barack Obama argued in explicit terms that a Biden loss would erode democracy.

The message couldn’t be clearer to Democrats unhappy about the Biden-Harris ticket: They had to vote, even if they weren’t excited about doing so, because the consequences of defeat are too dire. It’s not coincidence that the pitch from party leaders was usually paired with a direct plea to not only vote, but to make a comprehensive plan to do so at a time when options and confusion over the process are greater than ever before.

Of possible anxiety to some Democratic strategists, however, was that all the concern expressed about the existential threat posed by Trump took time away from a more basic but potentially more influential argument that the president — through his actions on health care and taxes — has hurt Americans in the pocketbook. Those arguments weren’t ignored at the convention, but they weren’t as prominent as some in the party would have liked, either.

After four nights and eight hours of programming, it’s clear that the Democratic Party’s most powerful and focused messengers still happen to be in the same family.

Michelle Obama set the convention bar on Monday night, opening with a tour de force that harnessed emotion to set the stakes and lay out the dire consequences if Trump were to prevail again. Two nights later, Barack Obama redeployed the sentiment of “the fierce urgency of now” that he first tapped in his own quest for the presidency 12 years ago. But this time his message was notably bleaker, warning of a democracy on the brink of extinction unless America elected Biden.

More than any other speakers, it was the Obamas together who most intentionally conveyed the urgency, and even anxiety, that many Democratic strategists believe is necessary to motivate on-the-fence voters in a race they expect to tighten this fall. While most speakers sought to check off a list of issues and personal stories, the Obamas preserved their time to push a directive: don’t blow this one.

The effusive reaction from party stalwarts cemented the couple as the premiere speakers of Democratic conventions to come, regardless of who is being nominated.

The sunset of the Clintons

While the Obamas convincingly displayed their enduring potency in the party, the force of another former presidential couple appeared to recede in the digital limelight.

Four years after becoming the first female presidential nominee of a major political party, Hillary Clinton delivered her Wednesday night speech just before the broadcast networks picked up the convention’s live coverage at 10 p.m. Former President Bill Clinton, whose status as a party powerplayer has been diminished by the #MeToo movement, similarly spoke outside of the primetime hour on the previous evening.

Pre-convention polls reinforced the waning interest in the Clintons. A CBS News survey found that while 92% of Democrats said they wanted to hear from former President Obama, just 56% said the same about former President Clinton.

The old Clintonian playbook of cautious triangulation also feels more like a relic as the Democratic Party accelerates its leftward shift to cater to a new cross section of voters who weren’t even eligible to vote when Bill Clinton first sought the presidency.

Hillary Clinton will always be a historic figure for smashing that first glass ceiling, but in the 2020 race, she’s been invoked far more frequently by the Trump campaign in attacks than by Democrats, who are eager to put their 2016 nightmare behind them.

A bar raised for the RNC

The first-ever online convention could have easily been a disaster. Cynical Republicans still unsurprisingly mocked it as a glorified telethon, but the four-day production that beamed between Wilmington, Del., Milwaukee, Wis., and countless cities across the country exceeded expectations and showcased the party’s ability to innovate.

Many Democrats loved the delegation’s roll call that featured scenic backdrops in every state and preferred the series of slickly produced videos that kept festivities moving over the usual uncontrolled speeches that often drone on.

But going virtual also eliminated a central element of a convention’s charm: the drama of the delegates on the floor, cheering raucously or booing mischievously. From a campaign’s standpoint, there’s little downside to cutting out the risk factors that can bubble up on the floor.

Next week, it’s the Republicans’ turn — and it’s still far from clear if they’ll be able to match the sheer production value that Democrats composed.

For months, GOP leaders had insisted their convention would be held the traditional way, with tens of thousands of Republicans donning red hats jammed inside an arena in Charlotte and then Jacksonville.

Now, they’re settling for some version of what the Democrats pulled off, although with a greater number of live speeches that include safely assembled live audiences. One RNC spokesperson is promising nightly surprises — just one indication that this make-shift convention is still in its planning stages, with only a few days before its scheduled to begin.

Fri Aug 21 , 2020
When California State University announced May 12 its schools would be online for the fall semester, Graciela Moran thought she might end up homeless. The San Bernardino student is immunocompromised and had been living in her dorm as a residential assistant. But with the Cal State announcement, her contract ended and her stipend was taken […] 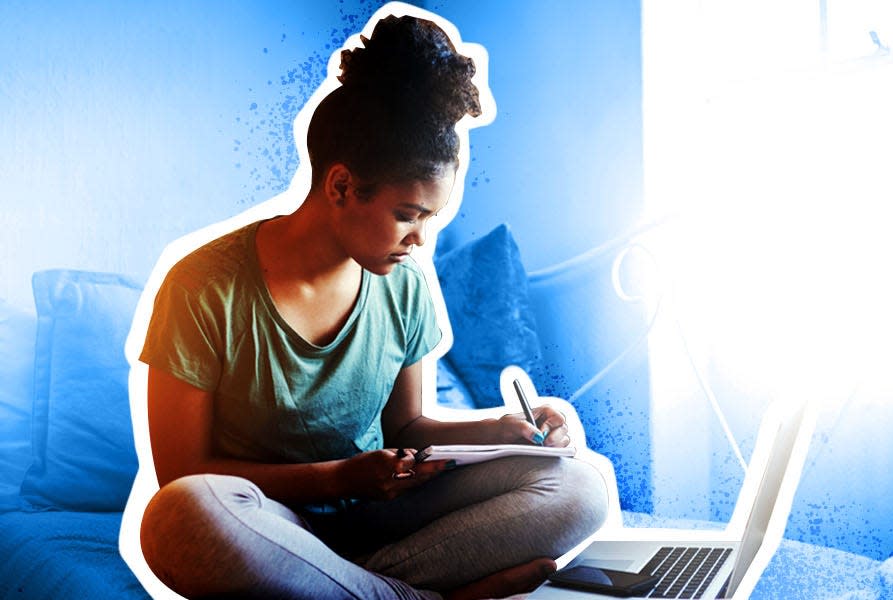