7 coping skills to deal with anger you might be feeling right now There’s a lot to be angry about these days. For instance: A pandemic that has stolen more than 166,000 American lives (and counting), a government unwilling to act to prevent more death, officials pushing to re-open schools […]

There’s a lot to be angry about these days.

For instance: A pandemic that has stolen more than 166,000 American lives (and counting), a government unwilling to act to prevent more death, officials pushing to re-open schools despite a deadly virus, mass unemployment, and the continuance of police brutality despite a global uprising against it.

“There’s this sense that things are supposed to be a certain way… And some people are angry and frustrated because they don’t have any other solutions,” says Dr. Rheeda Walker, a clinical psychologist, speaker, and professor of psychology at the University of Houston who focuses on Black mental health.

Like any emotion, in itself, anger is normal and healthy, says Dr. Lynn Bufka, the American Psychological Association’s (APA) senior director of practice transformation and quality. “All of our emotions are there to tell us something, to help us understand our experience in the world,” says Bufka.

But it’s important to know how to cope with our anger, because we don’t want to be at the mercy of it, explains Bufka. Especially right now, during a time of heightened emotions and fewer social supports.

“The usual outlets [to deal with anger] just aren’t there: hanging out with friends, traveling… people have a lot of pent-up anger,” says Walker.

Mashable spoke with Walker and Bufka to learn how you can deal with that anger on a daily basis.

1. Listen to your emotions and thoughts — and then, dig deeper

First off, take stock of your emotions and the thoughts swirling in your head. Sometimes, they can become catastrophic.

“When people say, ‘I can’t take this anymore,’ that escalates our negative emotions,” says Walker.

When you find yourself thinking catastrophically, Walker suggests changing the conversation: Think something like, “I can do this today,” and repeat this internal mantra every day if needed. When you break down your anger and frustration into manageable chunks, you can come up with short-term fixes to deal with it, she explains.

“Right now, life is about short-term solutions. We’re in a middle of a pandemic. There are no long-term solutions that any of us have control over,” Walker adds.

Once you’ve taken a step back to determine what you’re feeling, dig into why you feel that way. Bufka recommends taking a beat to pause, especially if you’ve just experienced a spike in anger.

Ask yourself, “What happened? What got me angry in that moment?” If it’s not obvious, journal and write about your emotions. You can track them and see if there’s a pattern. It’s possible you may feel angry at specific parts of the day, or when you’re with certain people. All that is information you can use.

Anger is valuable, says Bufka. “The anger is telling me something is not OK. And it’s not OK to have systemic racism, it’s not OK to feel disrespected.”

When you identify why you’re angry, you can better focus your response, she says. “If we understand the source, our self-awareness can help us in not taking out our anger on uninvolved others. Also, recognizing why allows us to talk about our anger more clearly and move from the raw emotional feeling to a state in which you can use your emotion for you, not against you,” she explains.

2. Be curious about people

Your might be ready to virtually duel it out when you see yet another rude or ignorant comment on social media. This frustration is understandable. Shouldn’t people know better than to send such sentiments into the world?

Well, yes, but: “When we place these ‘should’ expectations on other people… it creates more tension and it creates more frustration,” says Walker. And often, we don’t really know what someone’s intention is, especially via a screen.

“We make a lot of assumptions in our communication with others. We assume that they mean the same thing as what someone else said when they said it,” explains Walker.

An alternative, instead of boiling over in rage in front of your computer, is to ask what the person means by their comment. For example, if someone writes “All Lives Matter” on Facebook, if you feel safe doing so, you can ask, ‘What do you mean by that?’

By opening up the door to conversation, instead of conflict, you don’t have to be “secretly angry or outwardly angry with people who do things that we would rather they not do,” says Walker.

Of course, you also don’t have to engage.

“As frustrating as it may be to say, ‘I’m going to give that person some grace so that I don’t have to be angry with them,’ then that’s what we do,” says Walker. She suggests reframing the person’s behavior by telling yourself, “this person’s offensive behavior says more about them than it does about me.”

This can help neutralize your anger, Walker explains.

And, if it’s getting to be too much, you can also unfollow the person on social media or unplug all together.

Sometimes the best thing to do when you’re angry is to sweat it out.

“A lot of times it can be a physical action, because our bodies are physically activated [when angered]. So doing something physically can help us reset,” says Bufka.

You don’t even have to do strenuous exercise to reap the benefits. Deep breathing can help you recalibrate and allow you to focus on your breath rather than the situation at hand.

“It’s something we can do in the moment, you don’t need a professional,” says Walker.

She suggests searching for “diaphragmatic breathing” online for instructional videos. This kind of breath can be hard to master at first if you’re not used to it, but with practice, you’ll get it.

“It’s a very intentional approach to breathing that anyone, when they start to feel themselves starting to tense up, can practice,” Walker explains.

It can be useful to seek help from a professional to deal with your anger. But even in the best of times, finding the right fit can be a frustrating process. And if you’ve lost your job amid the pandemic, you might think therapy is off the table.

Bufka has some suggestions to make it easier.

If you have a trusted health provider (even if you’ve been laid off) you can ask them if they have any psychologist recommendations. If finances are tight, ask the therapist if they’re flexible with regard to payment.

“Many professionals will try to work with somebody if you say, ‘I’ve lost my insurance, can we figure out a payment plan?’ It’s always good to ask,” says Bufka.

This is a harder option to deploy given the pandemic, but you can also check out universities’ training clinics where people learn to become therapists. Bufka says this can be a way to pay less and still get access to mental health care.

It’s also worth researching community health centers near you, as those are usually lower-cost options.

If you decide to go the mental health app route, Bufka suggests the following to evaluate an app. (Note that the APA does not review apps):

App or not, if things start to become unmanageable it’s important to reach out to a professional.

5. Have music playlists at the ready

Music can help you get through the angry moments. Walker suggests preparing playlists with music you think will help you so you’ll have them ready at a moment’s notice.

“Oftentimes, when we’re really in the middle of something, it’s hard to plan and prepare and come up with a strategy. You need to have it ready to go in the moment,” says Walker.

You can take a few minutes when you’re not angry to curate these playlists. They can literally be labeled “When I’m angry playlist” or “When I feel sad playlist.”

“The mind can operate on autopilot and … we have to stop and do something different,” explains Walker. Autopilot mode is like being on a hamster wheel, “we keep going and going… and we don’t necessarily know what the goal is.” Music can help interrupt these automatic responses.

As far as what music you play, it’s up to you.

“Sometimes people want to listen to what they might call ‘angry music,’ to affirm how they’re feeling,” says Walker.

Anger wears on us.

“You have to think about how much energy you have to continue to confront some of these big concerns,” says Bufka. It’s a balance between using anger to effect change without exhausting yourself.

You don’t want anger to continuously chip away at you because of its effects on the body.

The trick is figure out strategies that help you calm yourself down. Walking outside can help because it encourages a shift in perspective.

But this doesn’t mean you have to lose your anger. You just want to limit its negative ramifications.

“I might still be angry about something but physiologically I’m not revved up all the time,” says Walker.

You can channel your anger to become an activist in your neighborhood or community, Walker suggests.

Sometimes you need to vent. Call up a friend or someone you think will validate your angry feelings. Just hearing, “I totally get why you’re angry about that” can calm us down.

“Being validated for something can also be very helpful in recognizing the emotion and figuring out how this is going to work in my life,” says Bufka.

This kind of exchange can also help you figure out what to do with the emotion. Your friend may be ruminating on the same issue and have suggestions for how you two can tackle it together (like donating to anti-racist organizations, for example).

Anger can be an incredibly valuable tool to spur social change, but you don’t want to allow it to destroy you.

“You want to ensure that the anger doesn’t stay in a place where it’s just eating at you,” says Bufka.

Thu Aug 13 , 2020
Action stations: Dover is expected to be extremely busy as travellers race to get home before quarantine takes effect: Port of Dover Hundreds of thousands of British holidaymakers in France, Malta and the Netherlands, and many more with plans to visit these countries, face two weeks in self-isolation when they […] 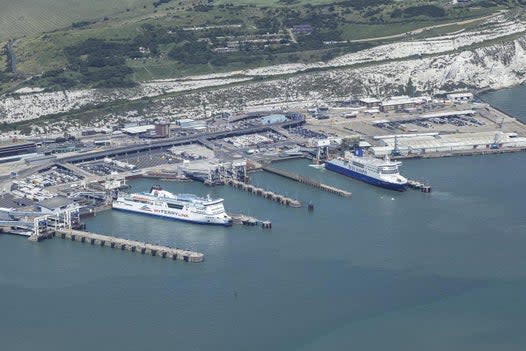