I’ve made 6-figures every year for five years. I already know you don’t care about my financial position and that’s not the point of this article. The money I made came from writing blog posts, publishing ebooks, working in finance, and owning a small side business that does consulting. In […]

I’ve made 6-figures every year for five years. I already know you don’t care about my financial position and that’s not the point of this article.

The money I made came from writing blog posts, publishing ebooks, working in finance, and owning a small side business that does consulting. In my early 20s, I thought making six-figures was crucial.

The idea of what money is has grown on me.

Most of us spend our entire lives trading time for money and not knowing why.

This has been the recurring thought bouncing around in my head for a while now. Understanding money meant understanding myself and perhaps life to a degree.

Here’s what I learned making 6-figures.

It won’t make you a better person

There are arrogant people everywhere who make a lot of money and treat people like garbage in the process. Seeing and meeting these people has made me obsessed with not mimicking their behavior.

Arrogance is a curse you want to shake off.

The amount of money you make has nothing to do with whether you are a good person or not. Only your actions can do that.

When I meet a person who is obsessed with getting financially wealthy, I usually run in the opposite direction using my chicken legs. The oxygen just leaves whatever room I’m in with these people who flash their money and their Rolex in my face, expecting me to get on one knee and praise their money-making abilities using gestures. ***Does a rude gesture***

Some of the best people you’ll meet in your life have no money at all, yet they selflessly give a huge part of themselves to other people. They get it.

It expands what you think is possible

I didn’t ever think I’d make much money as a young person. I had very little confidence and an undiagnosed mental illness that forced me to destroy many of the opportunities I encountered.

What changed was when I got paid my first (roughly) $20 as a blogger. It was not a lot of money but the possibility of where this journey could take me changed. It solidified that perhaps something I wrote might have a small amount of value.

In my early startup days, one cheeky salesperson used to enter my office every afternoon for a chat.

He liked to stir me up and see if he could get a reaction out of me. He would say things like “at twenty-something years old you must feel like you’re living the dream with this glass office, BMW out front, and the ability to order us scum bags around.”

Probably the only wise thing I ever said at this point of my life was this: “As fast as you can make a million bucks, you can lose the lot pretty quick too.”

I’d seen it time and time again. I’d seen people make a bunch of money from their business and then make 2–3 dumb decisions in a row and lose it all. Or think that everything they touched after that first million dollars would turn to gold. Many of them became washed up and never touched the drug of money again.

Level One: It’s not how much money you make but how much you keep that counts, and your ego can screw all of that up.

Level Two: Out of the money you get to keep, it comes down to how much money you put towards selfless pursuits, rather than boys’ toys.

Lots of money tactics are nonsense

There are so many quick fixes to making money that are advertised to us through the shiny screens of our phone using social media newsfeeds.

I’ve studied them all.

Honesty is how you make a lot of money.

You tell people the truth. You talk small if what you’ve done is small. You present simple strategies if you don’t know complex ones.

If the way you make money requires other people to lose theirs then you might want to reconsider. Making money is not about you and your dream; it’s about taking your experiences and skills and using them to be helpful and inspire people in some small way.

It’s easy to overthink money and get tangled in its web of shiny fantasies. Making more money really comes down to being more helpful.

Whatever you do, how can you be even more helpful?

At work that meant running training sessions, learning without being told, speaking up in meetings, practicing the basics of leadership, and finding as many ways as possible to help people online through blogging.

The most helpful people make all the money while the rest complain about the status quo. Go from blame and complain, to helpful, and you’ll make more money than you could ever spend.

It won’t make you more generous

You’d think when you make significantly more money you’d find it easier to be generous. It’s not the case. Before I made six-figures I didn’t support good causes. And making six-figures didn’t change that.

I found that giving had to become intentional. And in the beginning you have to try really hard. Your brain wants to tell you that you don’t have enough. Your brain also wants to repeat survival scenarios that require lots of money to solve, therefore justifying not giving away a dollar.

What changed everything for me was when I gave up Christmas Day with my family to volunteer at a Christmas lunch for the homeless. When people found out what I was doing they called me a “boy scout.” It was a test between me and myself. I wanted to understand what money could buy.

So before the event there was a call for volunteers and the community to donate presents to be handed out on the day. The lady running the event read out a list of presents they needed.

She then shared the story of a little boy who wanted to play soccer. He had gone through a difficult time as his mother was a victim of domestic violence. He saw her get beaten, regularly. This destroyed his education and he fell behind two years at school

He had no uniform, ball, or shoes to kick the ball around with. I put my hand up and offered to buy what he needed. I went to the local sports store and found the coolest soccer gear there was. I delivered it to the homeless shelter and thought nothing of it.

On the day of the event the volunteers in my group had the job of sitting with the clients (homeless people) and making sure they had the best Christmas Day possible. While chatting to a few people on my table, I got a tap on the shoulder.

The organizer said to me “the mother and child you bought the soccer gear for want to meet you.” It was unexpected. None of us were supposed to meet the people we bought presents for. The mother thanked me for the gift and became incredibly emotional. The same happened to me.

“This present is the break he needs. You have no idea.”

(I became emotional writing that.)

Still to this day, that moment guides how I think about money. That experience was incredible and it cost very little money.

It won’t solve a lot of problems

It is easy to think money is the answer to all of your problems. If you could only have $100K in your bank then everything would be awesome.

Money doesn’t actually solve a lot of problems; you do that with your actions.

It can put your life in perspective

Money gives you perspective on what matters and what doesn’t.

I thought money mattered but in the context of what is going on in the world right now, what it represents has changed.

Money can appear valuable.
Money can lose its value through excessive money printing too.

Money can bring transparency.
Money can spread lies too.

For everything that is good about money there is a polar opposite.

In some ways, how you choose to see the world affects what money can do for you and your life. Money can make or break you.

Money Is an Opportunity to Understand What Living Is

There is existing and living.

Money has helped define what living means to me over the last 5 years:

Earning 6-figures helped me realize that money doesn’t change how you feel or necessarily make your life better. You do that. You decide what money can do for you by the way you see yourself and the world around you.

What if the way you lived your life changed and money became a gateway to an entirely new way of thinking?

Money can shift your life towards a goal you could never have imagined.

This article first appeared on Medium.

Is Now the Right Time to Buy a Car?

Thu Jul 2 , 2020
By the time the coronavirus was sweeping the nation, Ali Jian, 42, a consultant in northern Virginia, already knew he wanted to replace his 2014 Subaru Forester with something bigger for his growing family. He decided on a new minivan but held off buying because dealers wouldn’t budge much on […] 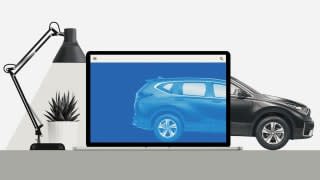