Click here to read the full article. JD Barnes recalls the first protest he photographed in New York following the killing of George Floyd: he and a friend were standing in Union Square, trying to figure out where things might be happening (this was before Instagram really kicked off with […]

JD Barnes recalls the first protest he photographed in New York following the killing of George Floyd: he and a friend were standing in Union Square, trying to figure out where things might be happening (this was before Instagram really kicked off with protest location information, he says). “As we were talking, literally a protest just materialized,” he says. “They just started walking through Union Square. I looked at my friend and I was like, ‘Well, here we go.’”

Barnes, whose protest images have run on his Instagram and been published in a variety of publications throughout the past few weeks, has a background not in protest photojournalism, but in fashion and beauty editorial photography; he is the chief photographer and a photo editor at Essence, where he has shot several of its most recent celebrity covers, including Lizzo and Regina King.

“I’m definitely not what you would call a classically trained photojournalist in any, shape or form,” he says. “But this was just something that I felt was important and needed to be captured, and needed to be captured by African Americans. So I took on the challenge. It was something that I felt like I needed to do, and I can’t stress that enough, the need. The first day of when they started protesting, I didn’t go — I was still on the fence about it — and then I was on Instagram and I saw, because I had a few really close friends that had went, I saw a police car on fire and it was just like, ‘whoa, this is crazy. This is real.’ The next day it was like, ‘I don’t care what I have to do. I have to get out here, I have to figure it out, I have to see what’s going on.’”

Capturing the reality of what is happening on a human level at the protests is core to Barnes’ beliefs, which is why he is staunchly against blurring out the faces of the people he is photographing (an approach that has been debated online).

“I feel like that takes the human element away from the protests. I’m not here to just take pictures of craziness, and it’s the people who matter because ultimately it’s their revolution,” he says. “I prefer though to be as close to the subjects as possible. I want them to see me. I want them to know that I’m taking their picture. [I feel there is a lot of] misinformation about, ‘Oh, they’re going to use your images to find you’ — I really feel like that’s a fear tactic, because protesting is a right. It’s a right, as American as bearing arms and freedom of speech and everything else. As long as you’re not flipping over a car or throwing a bomb or something like that, your face shouldn’t really be something that you should worry about. I want my subject to know that I’m taking their picture, so that we can connect, so that it’s real versus me just shooting them from the side or them not being aware. Obviously there are a lot of those pictures in my work as well, but I also really like to connect.”

The protests themselves have changed over the weeks, as the movement gains international momentum, and Barnes, too, has experienced a wave of variation in what he’s shooting and how he is personally responding to it.

“Early on in the protest, it was really difficult from a mental perspective, just because those first several days the police were very aggressive, and you could see them using their tactics against the crowd and they definitely had the riot gear on. It was more of a state of who knows what could happen. My head was constantly on a swivel. It felt similar to genuine war, like war photojournalism, where you have to be aware at all times because you don’t know what’s going to happen and you don’t want to be in the wrong place at the wrong time. That was very difficult,” he says.

“Then, I guess, I normalized that. As I was normalizing that, the protests themselves kind of changed and it became to some level, very performative. As a person, I’m all for peaceful protest, but also I do feel like to get your point across in a protest, it has to be more than just a lot of people marching around randomly. There has to be some structure to it, so that’s been somewhat of a struggle just as the movement continues to grow and evolve. You have some protesters who are very hard-core as it is in their message and their approach. Then you have a lot of protesters who have basically called the police ahead of time to let them know where they’re going. Basically have a police escort, which to me is just like the antithesis of what a protest is at that point, it’s become a parade. Some of the leaders, some of the organizers are so very fearful of the consequences of the actions that they’re hedging. To me, that’s not the genuine spirit of what this is supposed to be and what people are marching about and what people are saying within the marches.

His third or fourth night out shooting, he was hit by a police baton.

“We got cattled in as a group, and these police officers came from the side. Some of us didn’t see them. I looked up and it was a policeman right in my face, and he was screaming at me to go this one direction. I started trying to get to that direction. Another policeman came out and he pushed me, and then another policeman came out and he hit me on my leg with the baton, and it was just like, ‘Man, this is real. This is really, really real,’” Barnes says. “You need to be aware of that realism. This is not a portfolio-building experiment or something to tell your friends like, ‘Yeah, I was out there.’ This is real life. I know people who have been in the hospital because of being accosted by the police during various protests. People I know have gotten arrested — so it’s real. It’s trying to balance the knowledge of the things that have happened with how some people, I feel, have used these protests to just get out of the house or they’ve used it to have some Instagram clout, to be able to say, ‘Yeah, I was out here.’ And for me, especially because I have felt those batons and I have felt the fear and I’ve been chased through the night with the group, trying to get home — it’s just so much more personal to me.”

Getting hit with the baton only motivated him further, highlighting for him why shooting what was happening is a need on a personal level.

“After I got hit by the baton, honestly, I was so angry, but it was like a righteous anger,” he says. “It was, ‘I know I’m coming back out here the next night. I know I’m going to be back. This has to be covered. The truth has to be known about the entirety of this.’”

The harder days, he says, are the ones that lack that feeling, the ones where the protest groups feel less effective and more performative.

“[Those are] the hard days because I don’t feel like they’re necessarily practicing what they’re preaching, and it feels very like going through the motions. That’s difficult for me, but I try to think about it in the terms of within any revolution, there’s going to be peaks and valleys, there’s going to be lulls, where maybe not a lot of things are going on, but it’s up to the photographers and photojournalists to capture the truth of the entirety of it. It can’t just be a bunch of pictures of people getting beaten up and tear gas and things like that. It has to also be the joy of the movement, the spirit of the movement, specific people, their tenacity, the crowds you’re trying to tell,” he says. “At least for me, I’m trying to tell a well-rounded story that ultimately the end viewer will be able to see everything, at least from my experience, that happened during this time period.

“I’m right there in these marches. I’m not just an observer. I try to be, or I have tried to be, somewhat neutral in a sense, and just like take the pictures of what you get, but you can’t help, but feel the plight of the people. I am one of the people. I am a Black man. I have an affinity toward what they stand for and what they’re trying to achieve. If my images can help them achieve their ultimate goals, then I’m all for it because I do believe in the message. George Floyd, Breonna Taylor — I think just in the last couple of weeks, we’ve had several Black people hung from trees, and the media hasn’t even really touched on it. Many of them have been just written off as suicide potentially, things like that, but who as a Black person is going to hang themselves from a tree in this day and age? That’s just really hard for me to fathom as a Black man, that you would do that to yourself in this environment. Something about that just doesn’t sit well with me. You’re just seeing so many things, and once again, the story needs to be told, but it also needs to be experienced and I’m experiencing it as well.”

Ultimately, he is inspired — both by the impact his images have had on people, but also by the conversations begun by the movement, including within the fashion and beauty industry.

“The major work isn’t going to be in these interviews. The major work is going to be when this does die down or when things do start getting back to some semblance of normalcy, and are these Black photographers, whose work is so interesting and dynamic as photojournalists, are we also going to make sure that we think about them when it comes time to do our editorials, when it comes time to tell the stories beyond protests and revolution?” Barnes says. “When we’re just talking fashion, so many of us who are out here are not photojournalists by trade. That’s not how we make our money. We make our money trying to do editorials, do campaigns, things like that. I implore these publications to think about us beyond the photojournalist aspect and think about us as it pertains to the real work that you guys are known for. Whether that’s the Vogues or the Women’s Wear Dailys, etc., etc. We’ve got to get Black artists, Black experiences within the mainstream of fashion and beauty — not just when we’re mad.”

Launch Gallery: JD Barnes on Shooting The BLM Protests as a Black Photographer

U.K. Sets Safety Guidelines For Cinema Reopening But Masks Not Yet Mandatory

Thu Jun 25 , 2020
Click here to read the full article. The UK Cinema Association has published safety guidelines for the reopening of cinemas, less than 10 days before some movie theaters are set to open. Face coverings in cinemas are not mandatory, in line with U.K. law. Guidelines reflect advice from a working […] 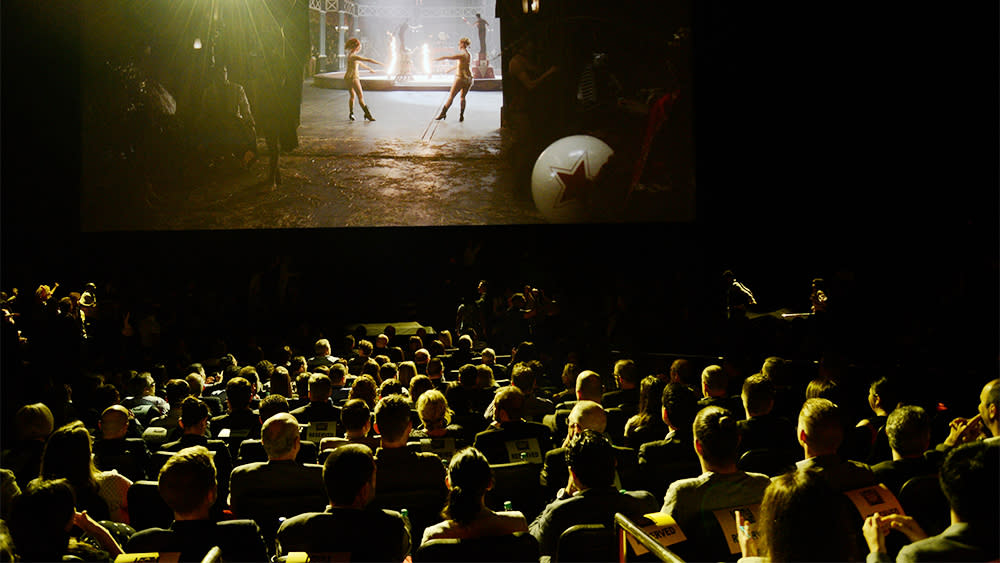