ALBANY — For three months, as a deadly virus gripped New York in its vice, Gov. Cuomo calmed a nervous and uneasy public during daily televised briefings that revealed a seldom-seen side of the governor. For millions of Americans, a daily dose of Cuomo was just what the doctor ordered […]

ALBANY — For three months, as a deadly virus gripped New York in its vice, Gov. Cuomo calmed a nervous and uneasy public during daily televised briefings that revealed a seldom-seen side of the governor.

For millions of Americans, a daily dose of Cuomo was just what the doctor ordered as the coronavirus ravaged the state and the death toll climbed. Concise, candid and full of PowerPoint slides, the gov’s data-driven press conferences offered a sense of stability amid the uncertainty.

Longtime political observers, who described the governor as a calculating and meticulous manager obsessed with details and the machinations of government, said Cuomo was in a way made for the moment.

“Experience matters” when it comes to such a crisis, one Albany insider said.

Gov. Cuomo held a press conference, Friday, inside the Javits Center, to unveil the measures taken to turn the center into a makeshift hospital, which can hold 1,000 beds. March 27, 2020. (GREGG VIGLIOTTI/)

“People responded to that,” they added. “What people thought were his negatives, his control-freak tendencies, proved to be his strongest assets in this situation.”

But it wasn’t just charts, graphs and quotes from a fictitious philosopher that endeared the governor to his captive audience. Amid the detailed breakdowns of infection rates, hospitalizations, and the strategic needs of the state and the battling with the feds over beds and ventilators, another side of Cuomo emerged.

The man appearing on-screen each day began to show empathy, humor and, some said, a rarely revealed sincerity that engaged an audience hungry for a grounding force.

“I think that he has presented himself differently and much more positively in the last few months as a result of this virus,” said Dr. Bart Rossi, a political psychologist. “The way he comes across looks much more personable and even his manner of speech is different.”

Cuomo connected by making the pandemic personal, Rossi said. He talked about his family, his daughters, his fears for his elderly mother, even his relationship with his dog, Captain. He sympathized with those suffering from cabin fever and mused on the psychological and social implications of social distancing.

“This was someone who was acting as the voice of the reason and he managed to alleviate people’s fears,” an Albany politico with no links to the administration said. “Then throughout, the stories of his mother and kids showed a human side that people haven’t seen.”

Cuomo also occasionally took the show on the road, holding briefings at medical colleges and testing facilities across the state and even welcomed a variety of guest stars including comedian Chris Rock, actress Rosie Perez and his own brother, CNN anchor Chris Cuomo, to impart the importance of the state’s strict shutdown, mask mandates and other safety measures.

On Friday, the curtain closed on the Cuomo show as the governor wrapped up his final daily briefing with a somber and emotional address applauding New Yorkers for stemming the spread of COVID-19.

“Today, we have done a full 180, from worst to first,” he said, opting to deliver his 111th straight address from the formal confines of his office. “We are controlling the virus better than any state in the country and any nation on the globe.”

Rossi said it was a fitting setting for Cuomo’s coronavirus coda.

“This is a different Cuomo, a more positive Cuomo, a guy that looks to me more organized and together in himself and how he presents himself… a guy that you can relate to and make sense,” he said. “He does look different. He can’t go backwards otherwise he’s going to lose the public support.”

“He knows that he’s in the national spotlight. He needs to figure out if he wants to have that light shine even more on him or and not go beyond. It’s decision time for him,” Rossi added.

New York is not out of the figurative woods yet as the state faces a crippling budget crisis and potential spending cuts to social services, education and more if Washington lawmakers don’t approve federal funds for state governments.

Longtime Democratic strategist Hank Sheinkopf said Cuomo can best utilize his newfound fame by taking the show in the road within New York and even nationally.

“The smart move is to get in the streets and look at people taking back their city and their state after all this time of being isolated and being very much a part of that, ” he said. “It is really like a canceled TV series, depends on how much more people want, you know.

“Now the question is does the star become real to people. If it becomes real and catches fire he could be very, very significant in helping Joe Biden get elected,” he added.

New York Governor Andrew Cuomo and his daughter Michaela Kennedy Cuomo are seen during the Governor’s daily press briefing from the Intrepid Sea Air Museum on Memorial Day during the coronavirus pandemic outbreak on May 25, 2020 in Manhattan, New York. (Luiz C. Ribeiro/)

Throughout the crisis, Cuomo brushed off talk of higher aspirations amid his newfound national presence. In spite of his assurances, rumors swirled and some even speculated that the governor could replace Biden atop the Democratic presidential ticket

“I have one agenda, which is to work for you,” he added.

'It has been reduced to a show'

Sun Jun 21 , 2020
Getty Images Yoga is not supposed to be about how you look. In fact, the purpose of this 5,000-year-old Indian practice is the very opposite: to combat the superficial with the spiritual and encourage mental transformation through movement. But in recent years, it seems these intentions have fallen to the […] 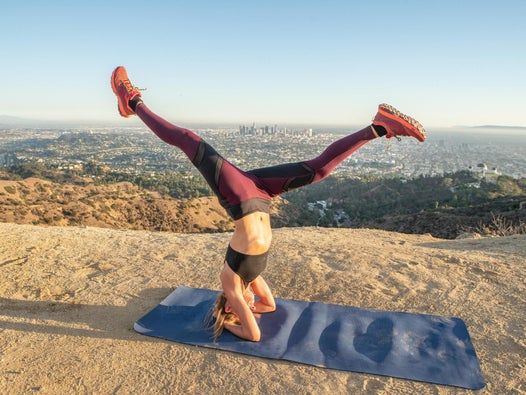