Fashion lovers take note: On Thursday, a bounty of wonders by Alexander McQueen goes up for auction by Doyle New York. The 50 pieces of clothing and accessories are from the collection of Jennifer Zuiker, who started acquiring the brilliant designer’s wares many years ago, via a pair of shoes […]

Fashion lovers take note: On Thursday, a bounty of wonders by Alexander McQueen goes up for auction by Doyle New York.

The 50 pieces of clothing and accessories are from the collection of Jennifer Zuiker, who started acquiring the brilliant designer’s wares many years ago, via a pair of shoes at Neiman Marcus in Las Vegas. She fell in love, and so began a long period of acquisition. The auction items span the collections of the house founder from 1995 to 2010. The earliest piece is from the “Highland Rape” show that rocked fashion — a pair of McQueen’s now-iconic bumster pants.

The online auction gets under way at 10 a.m. EST. Estimates range from $300 to $500 for a Plexiglas Iris Box clutch to $40,000 to $50,000 for a sweeping cape from “Supercalifragilisticexpialidocious,” fall 2002. That show opened with a different cape, a lavender take on Red Riding Hood, worn by a model who walked the medieval, mysterious floor of the Conciergerie accompanied by a pair of wolves on leashes.

Numerous other looks come from some of McQueen’s most memorable collections: a demure yellow and white pastoral party dress from “It’s Only a Game” (The Human Chess Match), spring 2005; a powerful lace-trimmed wool tartan dress from “The Widows of Culloden,” fall 2006; a frothy black party-mourning dress hybrid from “The Girl Who Lived in the Tree,” fall 2008; a number of the mesmerizing, complicated, printed looks from “Plato’s Atlantis,” spring 2010, the designer’s last runway show. Before his death in February 2010, McQueen had been at work on fall 2010, a collection called “Angels and Demons,” which was shown posthumously and titled based on its provocative religious imagery. From that collection, the auction includes a cocktail dress that subverts elements of sari and pouf with an evocative medieval figurative print.

Many bidders will likely have considerable knowledge of McQueen. Those who don’t, but who may just want to own a piece of fashion history, should research if they win their piece. McQueen’s genius resonated as designer and storyteller. Singularly exquisite, each runway piece is part of its creator’s visual catalogue of rich tales, typically romantic, often dark, sometimes hopeful.

Zuiker discovered McQueen after coming upon his spring 2001 Voss show online. It explored a concept that few designers would tackle today — a mental ward — in which he combined real clothes with wondrous, fanciful creations, including early renditions of those stunning avian headpieces. “That’s when I’m like ohhh,” Zuiker says. At some point after her shoe score at Neiman’s, Alexander McQueen opened a store in Vegas. Zuiker, a mother of three, started shopping and sporting McQueen ready-to-wear, often from the pre-seasons, “between pregnancies.”

She began collecting what she calls “the really good evening stuff” around 2006. She developed connections within the design house, through which she acquired pieces. She also met McQueen’s collaborator, hat designer Philip Treacy, whom she now considers a friend.

Few designers, present or past, elicit the awe and level of rapture among fans and critics alike as McQueen, Zuiker included. She loves the more esoteric pieces in her collection and is quick to reference shows, from “Horn of Plenty” to “Sarabande.” (The latter holds a special place in her heart because of “the big hat that Philip created”). Her initial interest, however, came from a more pragmatic place. “The tailoring is just spot on,” Zuiker says of McQueen’s rtw. “It was perfection. Where he would dart a dress…I’m a short girl with curves and it would fit me, which is shocking.…The fact that he would understand where your curve would be and he fit to a normal woman. The show pieces, obviously, are made for a model but then any of the ready-to-wear fits.”

Yet most of the auction pieces don’t come from that well-darted stock. While Zuiker did wear a Plato’s Atlantis dress to a “Twilight” premier, “The gown-gowns I’ve never worn…I’d go, ‘oh my God that’s so beautiful,’ and it goes straight into the archive. Then they’d sit for 10 years before I pulled them out again. Some of them have sat there for forever.”

Most of Zuiker’s collection has been housed, appreciated, but largely untouched, in storage at Garde Robe, the luxury wardrobe management and archive service. The auction items will ship directly from the warehouse, precluding any possible seller’s remorse that might arise during a final farewell. Zuiker has pulled her archives out a few times, in service of both McQueen’s legacy (she lent for the pieces for the McQueen documentary) and her own community (a small exhibition for her neighbors of Hidden Hills, Calif.)

Zuiker never attended any of McQueen’s shows, nor did she ever meet the designer. She did go to London for the designer’s memorial service at St. Paul’s. During that trip, she met Treacy and his then partner (now husband) Stefan Bartlett. The meeting was initially confusing for the milliner: “They were like, ‘You’re from Las Vegas?’ I said, ‘Yes, I was a waitress from Las Vegas and then we did this TV show and then it did well and now I live in California.’ I think he took a really good liking to me early on, we became friends from there. Whenever he comes to California, he’s always at the house and would visit with my dad. When my dad died, he was really upset to hear about that. So it kind of grew from there.”

The TV show that did well? “CSI” (and its spin-offs), which Zuiker’s former husband Anthony Zuiker created in 2000 that ran for 15 years. Jennifer said it was her idea, that inspiration came from a true crime procedural she watched during her first pregnancy. “It was a TV show called ‘The New Detectives,’” she says. “I was like, ‘you need to do [something like] this. This is a really good show. You’ve got to watch this.’” Anthony took her advice, arranged some forensic team ride-alongs and (after additional steps) a behemoth franchise was born.

Though Jennifer remained in Vegas as “CSI” took off, she eventually relocated to California for a second time (the then-couple’s first stint in Los Angeles years earlier ended when, among other challenges, Zuiker broke her elbow, forcing her to give up a waitressing gig at the Beverly Hills Hotel). Initially, she moved to Brentwood (“the most inconvenient place to live”) and then made the shift to Hidden Hills after her divorce.

The auction move is partly in preparation for Zuiker’s retirement — which seems still far-off. She just turned 50, but admits to 49 1/2. (COVID-19 forced cancellation of her blow-out celebration in Africa. She reasons that, since the party didn’t happen, neither did the birthday.) Two of her three sons are still in school, one in college, the other in eighth grade. But once “they’re all settled,” she plans a major move, to Africa, where she’ll spend half her time.

A lifelong animal lover (her menagerie includes three dogs, chickens, ducks and a rescue squirrel), Zuiker plans to settle in a private preserve called Sabi Sand. “That’s my happy place. That’s where I’m trying to retire off to so I can just sit quietly in the bush and not around people.” That yearning, and the fact that her sons have little desire for archived McQueen, prompted her to look into selling the collection after years of refusing requests to sell a piece here or there. “My business manager was like, ‘What are your plans for it? It might be time for you to auction.’”

That advice came from a sound place. Zuiker notes that the archive’s monthly upkeep costs more than a hefty house payment. And Garde Robe isn’t her only storage expense. She also has a lot of square footage to house the Halloween props that she rents out for installations and movie sets through her company Gory Girl Productions. “Two warehouses full of Halloween and the couture warehouse — it’s a lot of warehouses,” she concedes.

Initially, Zuiker had hoped that her pieces (the McQueens, not the Halloweens, which she will continue to rent out) would find a home in a museum. But outreach to the Victoria and Albert Museum proved a dead end. Zuiker wanted to loan the pieces, but says the museum preferred full ownership. The decision to go to auction thus made, Zuiker and her business manager contacted numerous auction houses and decided on Doyle because it was interested in selling the largest portion of the collection.

Not that Zuiker is parting with every precious McQueen. For instance, she’s kept the cream and gold embroidered gown from “Angels and Demons,” and for a very specific end use. “When that came out, I was like, ‘oh, I’m going to get buried in this,’” she says. “So we call that ‘the death dress.’ Everybody knows, this is my death dress. This is what I’m getting buried in.”

Zuiker also withheld from auction a few non-casket-bound looks from Plato’s Atlantis, Horn of Plenty and other collections. As for the rest? She hopes the pieces find their way into the hands of like-minded fashion lovers. One notable dream buyer: Daphne Guinness, with whom Zuiker admits she’s obsessed. “I hope that there’s a piece in there that she wants,” she says.

While Zuiker’s McQueen dresses and shoes may be destined for other homes, some interesting connections to the late designer will remain, including one with a kismet all its own: Robert Paine, Zuiker’s partner of many years. The two met during her summerlong stay in London during her divorce. He worked on her security detail. After the couple started dating, he revealed that he had been part of the security team responsible for McQueen’s memorial service. Now, Paine lives in Hidden Hills and helps with Gory Girl in addition to keeping up with his own security work.

Given the auction’s timing, with the world in upheaval and all kinds of beliefs and norms shaken to their core, one might wonder if her auction sale is Zuiker’s tacit acknowledgment of a loss of belief in fashion, in its power and relevance in the real world. Absolutely not. “Fashion will always be relevant,” she insists. “Because a piece by a really good designer can make a statement, or make a person feel a certain way when she puts it on. So I think that’s always going to be important.”

Launch Gallery: Bridget Foley’s Diary: A Trove by Alexander McQueen, Up for Auction

Illegal for more than six to socialise

Wed Sep 9 , 2020
Police patrol south London’s Greenwich Park earlier this year – Peter Summers/Getty PM to ban larger gatherings of family and friends Social gatherings of more than six people are to be made illegal. Boris Johnson will make the announcement today after a sudden surge in coronavirus cases prompted fears of a […] 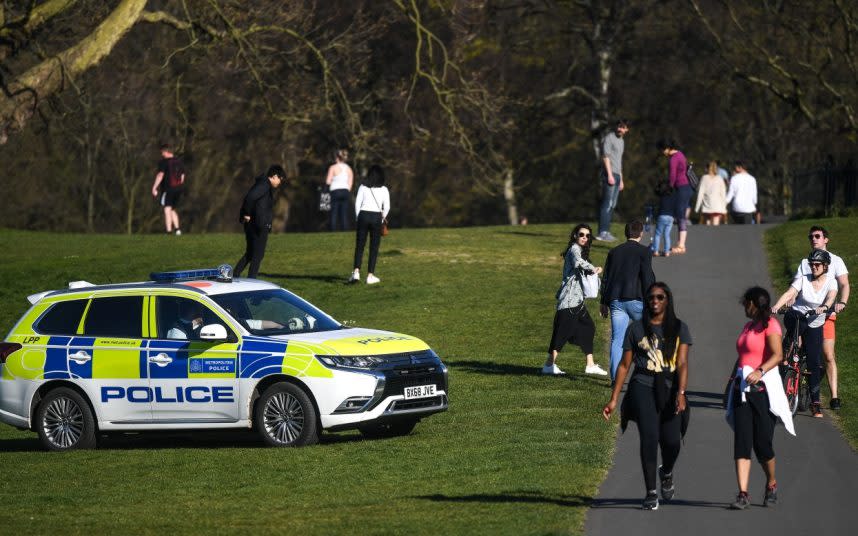