Photograph: M4OS Photos/Alamy Stock Photo Thousands of passengers have been left waiting for refunds after their flights were cancelled, even though the online travel agents they booked through have been paid by the airlines. Some customers are still owed money two months after their fares were refunded to their booking […]

Thousands of passengers have been left waiting for refunds after their flights were cancelled, even though the online travel agents they booked through have been paid by the airlines.

Some customers are still owed money two months after their fares were refunded to their booking agents.

Ryanair has accused agents, including Opodo, Lastminute.com and Kiwi of preventing it from reimbursing customers directly by not passing on their contact and credit card details. It says the companies use corporate credit cards but do not make it clear to the airlines.

It also claims the agents are selling flights without permission from airlines and has called on the aviation regulator the Civil Aviation Authority to take enforcement action.

Under EU aviation rules, passengers are entitled to claim refunds for cancelled flights directly from airlines. However, when they have tried to do so, many have found the money has been already been refunded to a card belonging to the agent.

The Guardian has been contacted by more than 300 passengers who are owed sums of up to £3,000, despite airline receipts showing their fare has been repaid.

Most of the complaints are from Opodo customers who report they have struggled to chase their refund because the customer service number is not clearly displayed on its website and call wait times are lengthy. There is no email option.

Stanley Batchelor tried for four months to claim a refund for easyJet flights booked via Opodo. “I kept receiving emails from Opodo which gave a voucher as the only option and asked me to click ‘I agree’,” he said. “Eventually I contacted easyJet which promised a refund, but the payment confirmation showed the money had been paid to a Mastercard that wasn’t mine. Opodo confirmed it was their card, but said they couldn’t pass on the money because it had not reached their account.”

Opodo refunded Batchelor four weeks after the easyJet payment following contact from the Guardian. It said it uses its own credit cards to make bookings on behalf of passengers and passes on refunds as quickly as possible. A new online portal allows customers to request and track repayments.

“Opodo owns the relationship with the customer as the customer has often bought more than one product from Opodo which is beyond the flight alone,” said a spokesperson.

Opodo’s terms and conditions, however, make clear that the customer contract is with the travel provider. They also state that Opodo is required to pass on customer card details to the airline to fulfil the booking.

The complaints website Resolver said it had received thousands of complaints about the same issue.

Ryanair, which has itself been criticised for refund delays, said booking platforms were obstructing direct contact between airlines and passengers to conceal often heavy surcharges that are added to the booking and pocketed by the agent.

Airlines require agents to inform passengers of any extra fees added to the airline’s own charges.

Test bookings made by the Guardian on Opodo, Kiwi and Lastminute.com showed that surcharges for ancillaries such as baggage and seat reservations inflated the airline’s own price by up to 85%. Add-ons such as emailed boarding passes, SMS updates and lost baggage cover increase it still further.

Some online travel agents also add substantial fees for aftersales customer service. Opodo customers are invited to pay £16.49 for benefits such as confirmation emails, “speedy” refunds and “preferential, free customer service” and an unspecified service fee is embedded in the fare price. Kiwi charges £15.74 on top of the advertised fare for “standard” customer service. Customers who do not pay the supplement get “low call priority”, “no email support” and “limited support availability”.

Lastminute.com was contacted for a comment. Opodo said it only shares customer contact details if airlines require it. It claims customers who do not pay a fee for customer services will still have access to its team, but those who do will be dealt with as a priority.

Kiwi told the Guardian that charging extra for different levels of support allows travellers on a budget to pay less if they are willing to rely on its booking management app instead of customer service.

It said it provides airlines with its own contact and card details rather than the passengers because it manages bookings on behalf of its customers. It criticised Ryanair for encouraging passengers to apply for refunds directly through the airline, claiming that it was a ploy to break agents’ relationship with customers.

In fact, regulation EC 261 which governs flights within the EU specifies it is the airline’s legal duty to refund passengers directly. “The law is clear that the refund must be provided by the airline that was going to operate the flight and not the agent that sold the flight,” said Coby Benson of consumer law firm Bott & Co. “If the airline has sent it to the agent rather than the passenger then it is still liable to refund the passenger and must claim reimbursement from the agent.”

Mon Oct 5 , 2020
During the 2021 Medicare annual enrollment period, October 15-December 7, U.S. seniors will be asked to choose from over 3,000 Medicare Advantage plans. The sheer complexity of this market, coupled with the logistical challenges caused by the COVID-19 pandemic, make Medicare insurance shopping via traditional insurance purchase practices increasingly ineffective. […] 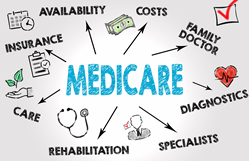