Facebook has hardly been discreet about its frustration with Apple over the latter’s 30 percent cut for in-app transactions — a policy that muddied the social media company’s messaging that its new paid online events offering would be free for a year. Now it seems that the pressure campaign worked: […]

Facebook has hardly been discreet about its frustration with Apple over the latter’s 30 percent cut for in-app transactions — a policy that muddied the social media company’s messaging that its new paid online events offering would be free for a year.

Now it seems that the pressure campaign worked: Facebook said Friday that the iPhone-maker has relented, allowing businesses to charge for online events on the social network without incurring the fee.

To be more specific, Apple has granted an exception to its rule that developers must use Apple Pay, which triggers the 30 percent cut, Facebook said. Now it can use its own Facebook Pay system, which bypasses the issue and allows most merchants — apart from game developers — to keep the entirety of the revenue until the end of the year.

The relationship between Apple and Facebook may be best described as “frenemies,” as two tech giants forced to rely on each other to some degree. Facebook’s portfolio of apps relies on mobile platforms like Apple’s iPhone software, while iOS’ popularity hinges on apps like Facebook and Instagram, as well as popular integrations like built-in sharing to social media to help round out the user experience.

Now Facebook can count this as a win, and in more ways than one. Apple’s policy got in the way of Facebook’s p.r.-friendly move to help businesses in survival mode this year make some money. And with executives at the social media platform facing a maelstrom of regular scrutiny over its handling of misinformation and other consequential issues like privacy, it’s clear that the company could use some feel-good headlines.

Whether that makes a dent in public perception is another matter. Facebook regularly lands in the spotlight, thanks to multiple congressional inquiries, external pressure from advertiser boycotts or other issues, including internal pressure from staffers, who held a virtual walkout this summer over the platform’s role in fomenting racial inequality.

The latest leaked audio from internal town halls portrays Facebook’s Mark Zuckerberg as a chief executive officer besieged by the worries of employees questioning the impact of the platform they serve.

In recordings taken in July, the ceo noted how the staff’s liberal leanings contrast with the conservative tendencies of its user base, though he acknowledged that “we are certainly exiting the first half of the year with our brand in a tougher place than when we started the crisis.”

It doesn’t help that former Facebook director of monetization Tim Kendall told Congress on Thursday that the company “took a page from Big Tobacco’s playbook, working to make our offering addictive at the outset.” Now he’s concerned that the work he and others have done for more than a decade has torn people apart and, he fears, will lead to “the brink of a civil war.”

Not that Apple is free from controversy. The company’s approach to its App Store and its requirement of Apple Pay for transactions has riled the app developer community — particularly Epic Games, the Fortnite game-maker whose developer account was pulled after it tried to bypass Apple’s payments system.

Now more than a dozen app-makers traversing games, productivity apps, even music streaming have joined forces to take aim at Apple’s control over the store, which has become a booming business worth up to $19 billion, by some estimates. The new Coalition for App Fairness emerges at a time when Apple and others are being scrutinized for monopolistic behavior.

While the social and political shadow cast over Facebook’s platform is undeniably massive, the pending court case between Apple and Epic on Monday shouldn’t be overlooked. How Apple treats app developers and how it may or may not force them to conduct business could have deep implications for how mobile commerce evolves in the foreseeable future.

During a year in which the pandemic has ignited online retail, so-called “m-commerce” is expected to explode. According to e-Marketer, purchases made over mobile devices are expected to reach $314 billion this year — a stunning number representing a $200 billion increase over four years and more than 44 percent of the overall e-commerce market.

Apple’s cut could be significant, as could Google’s, given new reports indicating that the latter wants to follow the iOS App Store’s cue and require its own billing system for in-app purchases and Play Store subscriptions.

There’s clearly a lot at stake and on multiple levels. And now the screws are tightening, as pressure mounts from internal sources, external partners, intra-industry peers, Congress and the courts.

Fri Sep 25 , 2020
Delonte West #13 of the Cleveland Cavaliers during the NBA game against of the Phoenix Suns at US Airways Center on December 21, 2009 in Phoenix, Arizona. The Delonte West story is defined by both triumph and tragedy. Prior to becoming an NBA player, the Washington, D.C. native had to […] 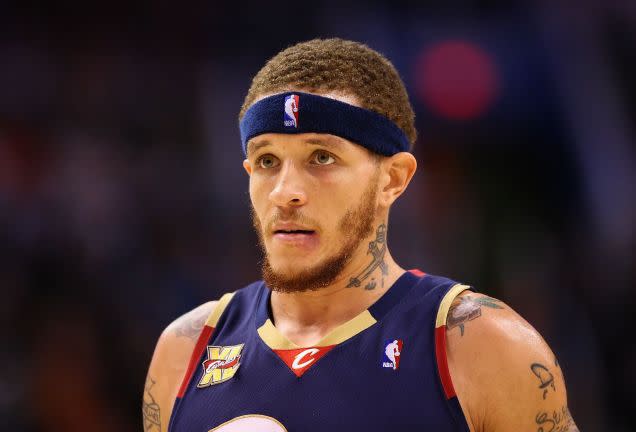