President Trump wants to Make America #Woke Again.  Viewers who watch the Trump campaign’s online programming aimed at Black audiences are encouraged to tweet the hashtag #Woke when announcing their support for the president. Viewers are also asked to text the word to a number that will sign them up […]

Viewers who watch the Trump campaign’s online programming aimed at Black audiences are encouraged to tweet the hashtag #Woke when announcing their support for the president. Viewers are also asked to text the word to a number that will sign them up for updates and allow the campaign to harvest their data.

This subversion of the term, which originated in the Black community as slang for becoming attuned to the injustice and systemic racism prevalent in American society, is part of a larger effort by the Trump campaign to erode Democrats’ longtime advantage with African-American voters.

Trump’s effort to win over Black voters may seem quixotic. Only about one in 10 Black Americans identifies as a Republican, a number that’s remained relatively stable for decades. And President Trump, with his history of racist statements, would not seem to be a natural candidate to win some of those voters back.

At the same time, polls show that Democratic nominee Joe Biden may be struggling with minority voters, at least when compared to his party’s previous presidential candidates.

While the president’s team touts its efforts to court a community that Republicans have long ignored, critics describe them as part of a cynical “depression strategy” designed to minimize Black American turnout.

“He doesn’t give a s*** about the process. He doesn’t give a damn about the electoral requirements,” former Republican National Committee Chairman Michael Steele, who is supporting Biden, said of Trump. “All he sees is ‘How can I block and tackle my way across the finish line and take out as many people as I can to do that.’”

The Biden campaign agrees with that characterization. In a statement to Yahoo News, Jamal Brown, Biden’s national press secretary, accused Trump of trying to “suppress turnout.”

“Joe Biden and Kamala Harris got into this race, in part, to advance progress on racial equity, combat systemic injustices, and defeat a racist president who purposely failed to take action against a pandemic that’s disproportionately impacted Black Americans,” Brown said.

“In fact, Donald Trump does not care about the Black vote. While he is actively trying to suppress turnout rather than genuinely engage African American voters, our campaign is working hard to earn their support.”

There is no question that Biden will win an overwhelming majority of the Black vote. Democrats have drawn the majority of African-American support in presidential races since the 1960s, when Presidents John F. Kennedy and Lyndon B. Johnson got behind civil rights legislation. According to data compiled by Cornell University’s Roper Center, no Democratic presidential candidate has earned less than 83 percent of the Black vote since 1976.

But Biden may not be doing as well as previous Democratic nominees. Four surveys conducted this month had him averaging about 79 percent support among African-American voters.

That polling data, however, comes with quite a few caveats.

For one thing, all of the recent polls show that there are enough undecided Black voters to bring Biden back in line with the Democrats’ more recent performances. For another, Biden won the Democratic primary in large part because of his support from Black voters, and his running mate, California Sen. Kamala Harris, would be the first Black vice president.

Biden also enjoys a robust overall lead in national polls, in large part because of his popularity among white voters, in particular older white voters. And Hillary Clinton’s Black support was also dramatically underestimated by late summer polls in 2016.

Meanwhile, Trump’s support among Black voters remains mired at around 10 percent, which is roughly in keeping with the share of the Black vote he won in 2016.

Still, as Clinton’s candidacy showed, any dip in Black support could prove consequential, particularly in key swing states. For example, according to a report from the Center for American Progress, if Black voters had turned out for Clinton in Michigan and Wisconsin the way they had for Barack Obama four years earlier, Clinton would have won both states.

The Trump campaign says it has put together an operation that’s making a concerted pitch to the Black community. The centerpiece of this effort is “Black Voices for Trump,” which has held events around the country, including “voter training” sessions and “MAGA meetups” in swing states. Members of the group’s advisory board are also frequently deployed as surrogates for the campaign on cable television.

Perhaps the most well-known person in Trump’s Black outreach operation is Katrina Pierson, who works as a senior adviser to his campaign. Her job includes managing the various coalitions the campaign has formed to target individual communities. But Pierson says she has taken more personal “care and concern” in Black Voices for Trump. “Because, I’m Black, No. 1, and, No. 2, the party hasn’t ever really had a Black coalition,” Pierson said.

Trump’s allies argue that he’s poised to win over more minority voters. Among other things, they point to his work passing bipartisan criminal justice reform legislation, providing funding for historically Black colleges, and presiding over the lowest African-American unemployment rate in history.

But the coronavirus pandemic obliterated the strong economy and near-full employment Trump was hoping to run on. He has also been questioned — including in a memorable, contentious exchange with a Black woman at a town hall earlier this week — over whether his efforts to repeal Obamacare would lead to skyrocketing medical costs and limited health care access, particularly among people of color.

And Trump’s crackdown on protests for racial justice following the death of George Floyd in May has drawn rebukes from Black leaders across the country. So have his critiques of peaceful Black Lives Matter demonstrations and his newfound emphasis on “protecting” suburban areas, which critics say is a thinly disguised appeal to white racial anxieties.

Pierson dismissed the idea that the president is looking to stoke racial resentment and said that the growing number of Black suburbanites appreciate his message.

“President Trump looks at the community and says … ‘We want to protect suburban areas,’” Pierson said. “I thought, that’s great. I’m Black. I own a home. I live in suburbia. My community is gated. Thank you, Mr. President.”

The Trump campaign is also hoping to highlight Biden’s record on issues of race and criminal justice. In particular, it wants to remind Black voters that Biden was the author of a strict 1994 crime bill that critics say exacerbated mass incarceration and helped devastate some minority communities.

“That’s really one of the messages that we want to make sure Black Americans know. It’s like, ‘Hey, you know, Joe Biden wrote the crime bill,’” Pierson said.

The Trump campaign has also emphasized controversial comments Biden has made over the years, including a 2007 interview where he described Obama, his future running mate, as “the first mainstream African-American who is articulate and bright and clean.” It also points to Biden’s suggestion, made during a May interview with African-American radio personality Charlamagne Tha God, that anyone who is not sure whether to vote for him or Trump “ain’t Black.” Biden later said he regretted that remark.

But progressives argue that Trump’s team is more interested in discouraging Black people from voting than winning them over.

Hatch believes Biden and the Democratic Party have “more work to do” to maximize support among Black voters. She also suggested Biden had mishandled his messaging around the protests out of a desire “to not scare off white working-class voters or white suburban women.”

Trump has tried to tie Biden to leftist rioters and activists who want to “defund the police.” Biden, a relatively moderate Democrat, has responded by making his own criticisms of violent protesters and emphasizing his desire to increase funding for law enforcement.

Hatch says this strategy is a mistake. “Those things don’t meet the demands of the current Black civil rights movement and are not in concert with what Black voters want to hear right now,” she said.

Hatch also wants to see the Biden campaign invest “much more” into winning over Black voters.

The bigger issue for the Biden campaign isn’t so much Black voters turning out for Trump, but rather that some won’t vote at all. In 2016 Black turnout declined sharply for the first time in 20 years. Hatch sees Trump’s attacks on Biden’s record and on Democrats in general as part of a deliberate effort by Trump’s team to tamp down African-American enthusiasm.

“I think it all goes to the point of saying to Black people, ‘Your vote doesn’t matter. Nothing’s going to change, no one’s here for you,’” she explained.

Hatch fears this could be particularly effective in an election where many voters may be discouraged from casting a ballot due to the pandemic. “When you’re hearing messages that democracy isn’t improving your life, you’re less willing to jump through those hoops,” she said.

The Biden campaign responded to questions about its investment in the Black vote by pointing to a memo published last month outlining its paid media strategy. In the memo, Biden campaign manager Jen O’Malley Dillon noted that the campaign is planning to spend more on ads that target Black voters. The memo said the ads will be shown on major African-American networks and will “reach approximately half of all African American households.”

It did not specify how much money was specifically dedicated to this effort. The Biden campaign has not provided information about the precise amount or the number of its staff focused on Black voter outreach.

Both Hatch and Steele, the former GOP chair who is now working for a pro-Biden political action committee, also accuse Trump of playing an active role in setting up barriers to voting. Hatch pointed to “discriminatory voter ID laws” backed by Republicans, Trump’s efforts to undermine confidence in mail-in ballots, and recent cuts to the Postal Service budget as “obstacles” to voting.

“The only people engaged in Black voter suppression are Joe Biden and his radical Democrat friends in the mainstream media intimidating free-thinking and independent-minded Black Americans from voting for Trump,” Dennard said.

Yet in 2016, top Trump campaign officials reportedly bragged about having “major voter suppression operations” targeting Black voters and other Democratic-leaning groups. And Trump himself has admitted that he benefited from lower Black turnout.

“They didn’t come out to vote for Hillary,” Trump said in December 2016, just weeks after his election.

“They didn’t come out. And that was a big — so thank you to the African-American community.”

'Cuties' isn't what I expected. It's a powerful portrait of female rage

Sat Sep 19 , 2020
Médina El Aidi-Azouni, left, and Fathia Youssouf in a scene from “Cuties.” (Netflix) Well, I finally watched that movie everyone is talking about. No, not “Tenet,” which did not manage to single-handedly revive the film industry from its pandemic-induced coma in a week. I watched “Cuties,” Maïmouna Doucouré’s film about […] 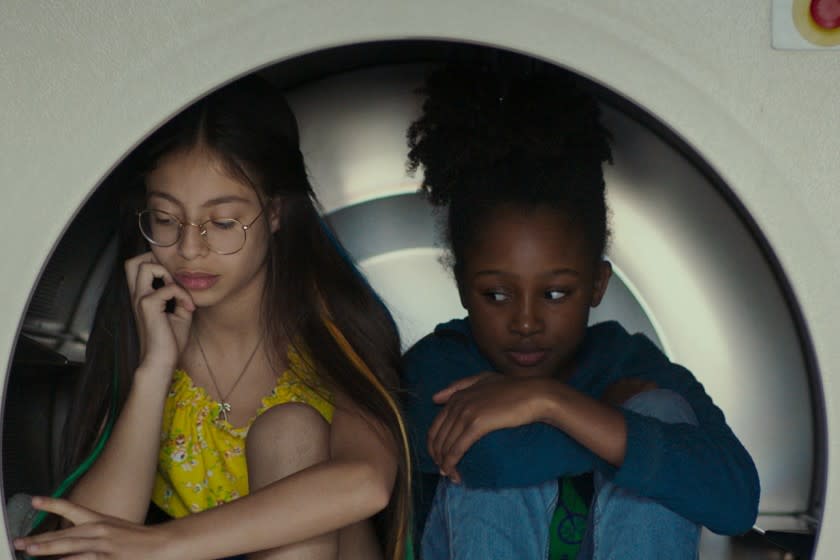