Joe Biden stood in a school gym in Iowa fumbling for a message, generating little electricity and looking his age. His rivals were drawing bigger crowds and beat him into fourth place in the caucuses. Political pundits declared him over the hill.

That was February. Now, in August, Biden resembles an ageing heavyweight boxer who got himself in shape, climbed back into the ring, and landed a knockout punch. His closing performance at the Democratic convention on Thursday night produced the finest speech of his career, a comeback for the ages more presidential than the current US president.

After half a century in politics, Biden accepted the Democrats’ nomination for president in his home city of Wilmington, Delaware. He spoke in a silent auditorium against a backdrop of stars and stripes before heading outside with his wife, Jill, to watch fireworks in lieu of the traditional balloon drop and confetti.

Biden’s speech offered decency, gravity, passion, steel and, importantly, a possible future. He used the word “light” 11 times, “hope” 10 times and “fear” only five times and drove a coach and horses through Donald Trump’s portrayal of him as borderline senile.

“Here and now, I give you my word,” Biden said. “If you entrust me with the presidency, I will draw on the best of us, not the worst. I will be an ally of the light, not of the darkness.”

He added: “United we can, and will, overcome this season of darkness in America. We will choose hope over fear, facts over fiction, fairness over privilege.”

There were two important themes. In these hyperpartisan times, Biden promised to reach out and govern for all Americans, a contrast with Trump’s politics of division. “While I will be a Democratic candidate, I will be an American president. I will work as hard for those who didn’t support me as I will for those who did.”

The former vice-president also went in hard on Trump’s handling of the coronavirus pandemic, which may prove to be the defining election issue. “Just judge this president on the facts. Five million Americans infected with Covid-19. More than 170,000 Americans have died. By far the worst performance of any nation on earth.”

He also promised roads, bridges, highways, broadband, ports and airports to spur economic growth, including 5m new manufacturing and technology jobs. He vowed to cut health insurance premiums and drug prices and deal with climate change: “It’s not only a crisis, it’s an enormous opportunity.”

But predictably, it was hardly the radical, urgent and inspiring manifesto for systemic change that progressives have been urging. Biden’s central message was character and the battle for the soul of the nation.

That was in keeping with much of the first virtual party convention in American history. It offered numerous testimonies to BIden’s kindness and empathy, his sense of justice and fairness. It set out his long life, pockmarked by tragedy, from dashing young politician to lion in winter poised to write a new and unexpected chapter.

But it had less to say on what his first hundred days in office would look like. It swerved past awkward policy differences between the moderate and progressive wings of the party on the climate crisis, criminal justice, healthcare, immigration and other issues.

During the Democratic primary, Senator Cory Booker had described Biden as the “architect of mass incarceration” for his role a 1994 crime bill, while Mayor Pete Buttigieg warned: “History has shown us that the biggest risk we could take with a very important election coming up is to look to the same Washington playbook and recycle the same arguments.”

On Thursday, both men offered platitudes about Biden’s ability to guide the nation to a better future. The theme over four days was get-back-to-normal incrementalism, less a moonshot than a promise to fix a clapped-out rocket so it can get off the ground.

Questions linger over the level of enthusiasm and excitement around Biden, a 77-year-old white male moderate. A Wall Street Journal/NBC News poll last week found that 58% of registered voters who support Biden say their vote is more an expression of opposition to Trump than support for the Democrat. Bret Stephens, a conservative columnist at the New York Times, recently wrote that supporting Biden is about “embracing mediocrity to ward off malevolence”.

Democrats were therefore wise to constantly remind voters that this election is a referendum on the incumbent. Obama rammed home the point that democracy itself is at stake. Speakers also urged people to vote and vote early, mindful that Trump is working around the clock to destabilise the election and make it harder for people to cast their ballots.

The all-online format also helped Democrats keep a disciplined narrative. Flesh and blood conventions are big, messy, sprawling affairs that feature backstabbing, gossip, morning fringe events and late night drinking where people speak out of turn and tensions spill into the open. The virtual convention, by contrast, puts the party chairperson firmly in the director’s chair.

Production values grew in confidence as the event wore on. Speeches were shorter and sharper, directed straight at the viewer. Barack and Michelle Obama’s remarks became intimate soliloquies.

The convention looked like America in all its glorious diversity: ordinary citizens, so often in the background, were thrust forward and often outshone the politicians. The stories that will linger belonged to the likes of Ady Barkan, an activist dying from a neurodegenerative disease; Brayden Harrington, a teenager with a stutter who received help from Biden earlier this year; and Kristin Urquiza, who said of her father’s death from Covid-19: “His only pre-existing condition was trusting Donald Trump – and for that he paid with his life.”

The final night was an unlikely mix of religion and comedy, sacred and profane. Julia Louis-Dreyfus, fittingly the star of Veep, was the host with the tough gig of doing stand-up without an audience. It was a brave choice but may prove a tactical error: Republicans love nothing more than accusing coastal “liberal elites” of sneering at “the deplorables” of middle America.

Among the political class this week there was a sense of the changing of the guard. Bill and Hillary Clinton, once towering figures in the party, were both relegated to slots in the first half of their respective evenings. Senator Bernie Sanders effectively bowed out after five incredible years that upended Democratic politics with a pithy line: “Nero fiddled while Rome burned. The president golfs.”

Sanders also urged everyone to rally around Biden, insisting: “The price of failure is just too great to imagine.” It ensured a profoundly different mood from the divisions with Clinton in 2016. The convention did portray a party united in determination to thwart the clear and present danger of Trump. It was less successful, however, in spelling out what comes next.

Fri Aug 21 , 2020
Conservative political strategist Stephen K. Bannon, the architect of President Donald Trump’s victorious 2016 campaign, was arrested Thursday on a mega-yacht and charged with plundering a fund set up to privately finance construction of Trump’s border wall. Three others were arrested elsewhere. In large part, it is a made-in-Florida scandal. […] 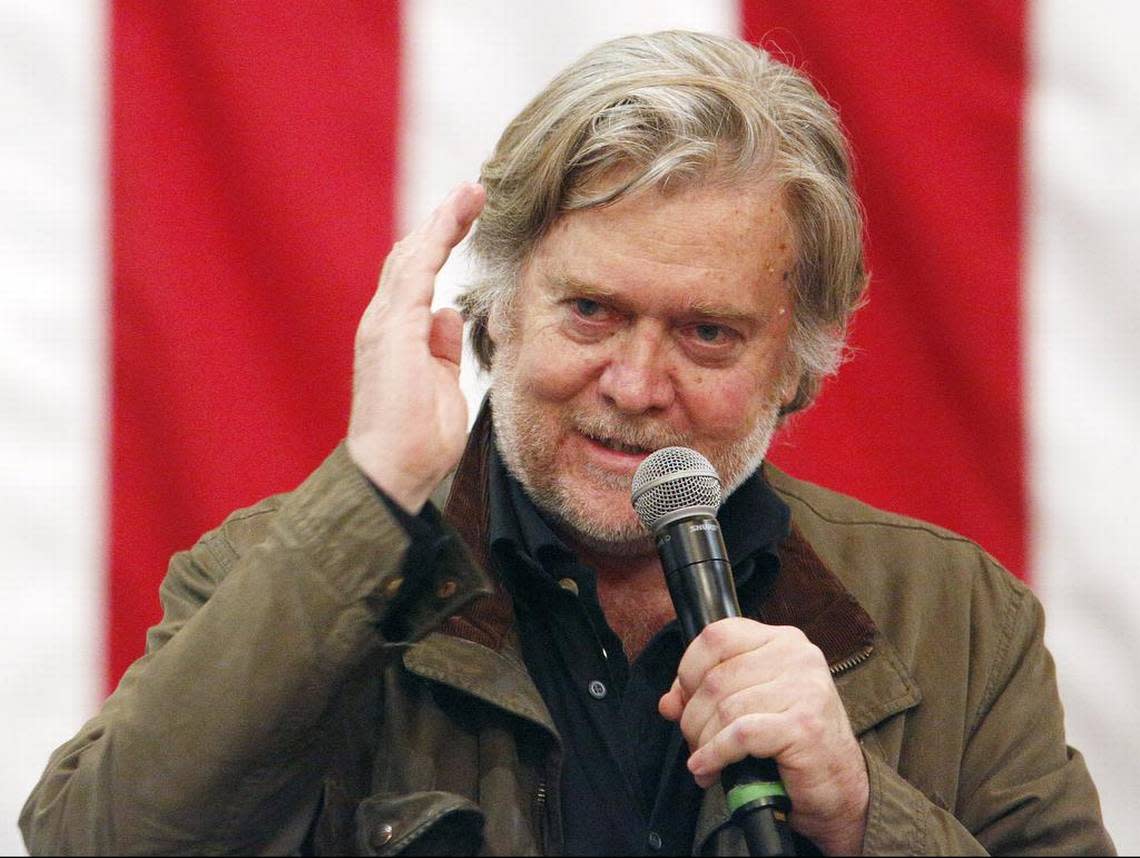