For the first time this election, Joe Biden is sitting on the biggest pile of cash — and he’s vastly outspending President Donald Trump, too. Biden is entering the final stretch of the general election with $141 million more in the bank than Trump, a stunning reversal of fortunes from […]

For the first time this election, Joe Biden is sitting on the biggest pile of cash — and he’s vastly outspending President Donald Trump, too.

Biden is entering the final stretch of the general election with $141 million more in the bank than Trump, a stunning reversal of fortunes from last spring, when Trump held a hefty financial edge as the nearly broke Biden emerged from the Democratic nominating contest.

Biden and the Democratic National Committee, along with their affiliated joint-fundraising groups, have $466 million in the bank, according to a Biden campaign official, after raising a record-shattering $365 million last month. Trump and the Republican National Committee, meanwhile, are sitting on $325 million in the bank, Trump campaign spokesman Tim Murtaugh said.

Just looking at the presidential campaign committees themselves, Biden ended August with nearly $181 million on hand to Trump’s $121 million.

Meanwhile, in August, Biden also outspent Trump more than 2-to-1, $130 million to $61 million — a disparity felt most acutely on TV, when the Trump campaign went dark in several key states.

Trump’s TV ad cutback stunned Republicans last month, but campaign manager Bill Stepien has said that he is trying to “carefully manage” the budget of the massive reelection campaign. Despite slashing television spending, Sunday’s Federal Election Commission filings detailing August expenses show that Trump spent just as much as he did in July, with digital advertising shooting up, but an opaque financing structure shielding spending from line-item scrutiny.

Trump began the general election versus Biden with a nine-figure head start over the Democrat, after the former vice president battled through an expensive primary contest while Trump raised money for years in preparation for 2020. Biden’s record-breaking fundraising pace, especially over the last month, has changed everything, while Trump’s campaign is suddenly watching what it spends.

POLITICO dug through the numbers. Here’s what stands out from the presidential campaigns’ latest reports, including what we can tell about where the Trump campaign is spending its money, despite trimming its TV advertising.

One company obscures how most of Trump’s money gets spent

Three-quarters of the cash that the Trump campaign spent last month was directed through American Made Media Consultants LLC, which FEC filings describe as responsible for making and placing the campaign’s TV and digital ads, as well as text message advertising and web development and hosting services.

If the Trump campaign is trying to trim its budget, the biggest place to cut is inside this LLC. But the lump sum, totaling $46.2 million last month, doesn’t shed much light on just how the money was spent because the consultancy can send the money back out to other subcontractors without disclosing them.

Indeed, American Made Media Consultants was the subject of a campaign finance complaint for allegedly being a “pass-through” to vendors and obscuring campaign disbursements. The complaint from the Campaign Legal Center said that by “failing to report payments to the campaign’s true vendors and employees, the Trump campaign and Trump Make America Great Again Committee have violated” campaign finance law.

Brad Parscale, who served as the campaign manager at the time, called the complaint “political theater 100 days out.” The Trump campaign also insisted it’s in full compliance with campaign finance law, saying AMMC “builds efficiencies and saves the campaign money by providing these in-house services that otherwise would be done by outside vendors.”

It’s unclear exactly where the money goes after it hits AMMC’s account, but we know some of the destinations. Federal Communications Commission documents show the Trump campaign uses a media firm called Harris Sikes to place its TV advertising, for example, though the firm’s name doesn’t appear in Trump’s FEC report.

Notably, a number of top campaign officials are not listed as salaried employees in the Trump campaign’s filings in August, including Stepien, the campaign manager, senior adviser Jason Miller and others. But from the outside, it’s unclear what other places might be final destinations for money going to the vendor responsible for most of the Trump campaign’s budget.

Last month, the Trump campaign significantly reined in its TV advertising, even going off the air at times in Pennsylvania, Michigan, Ohio and Minnesota. Biden ended up outspending Trump more than 3-to-1 on TV in August, $69.9 million to $18.8 million, according to Advertising Analytics.

The cuts to Trump’s TV spending reflected a growing fear of a cash crunch for the campaign, as Biden caught up in fundraising. But Trump officials have pushed back on the notion that they’re facing financial problems, pointing to a focus on digital and in-person campaigning, among other things.

… but spending big on the web

Trump had the campaign spending edge on two of the biggest digital ad platforms in August.

The Trump campaign spent more than $13 million advertising on Google alone during two weeks in August, including expensive ads on YouTube’s front page to counter-message the Democratic convention, and it totaled $17 million in the month of August. The Trump campaign spent another $4.4 million on ads through the president’s Facebook page in August, according to the digital giants’ political ad disclosures.

Biden spent $10 million on Google and another $1.5 million on Facebook in August. Biden-aligned fundraising committees made up some of the gap, as groups affiliated with Trump and Biden both spent tens of millions more dollars on the platforms prospecting for online donors and attacking the other side.

Facebook and Google are not the only places to buy online political ads, and the Biden campaign’s FEC report showed $28.7 million in digital ad spending, which could also include some ads booked to run in the future. Trump’s FEC report did not include anything approaching Biden’s online ad number from August.

The coronavirus pandemic drove in-person campaign events to a near halt over the spring and summer, but in August, Trump picked up his busy rally schedule again, appearing in Minnesota, Wisconsin, Arizona, Pennsylvania and New Hampshire. That meant the costs associated with those rallies returned, too.

Trump and the RNC spent a combined $6.8 million directly on events-related expenses, with more on event security and other related charges. The expenses included $640,000 to the National Park Service and $185,000 to the U.S. Treasury. A RNC official said those costs were related to the Republican convention, which was partially held at the White House.

The Biden campaign, which has ramped up its travel in September, spent significantly less than the Trump campaign on events-related expenses in August, totaling just $120,000. The DNC also spent $120,000 on event production and site rentals, a reflection of the party’s mostly virtual convention.

As Biden’s money builds, GOP super PACs get a fundraising edge over Democrats

While the Trump campaign’s fundraising is sagging, super PACs aligned with the president are ramping up — and outraising their Democratic counterparts.

Preserve America, another pro-Trump group which began spending early this month, will not report its fundraising figures until next month. But they are expected to be substantial. The group has spent $55 million this month alone, and it is expected to receive funding from GOP megadonors including Las Vegas casino mogul Sheldon Adelson and Home Depot co-founder Bernie Marcus.

Mon Sep 21 , 2020
Hanesbrands Inc. HBI is well placed courtesy of its robust growth efforts, which have been boosting investors’ optimism. Notably, shares of the company have surged 40.8% so far this year compared with the industry’s growth of 13.1%. Moreover, the stock has comfortably outperformed the Zacks Consumer Discretionary sector’s increase of […] 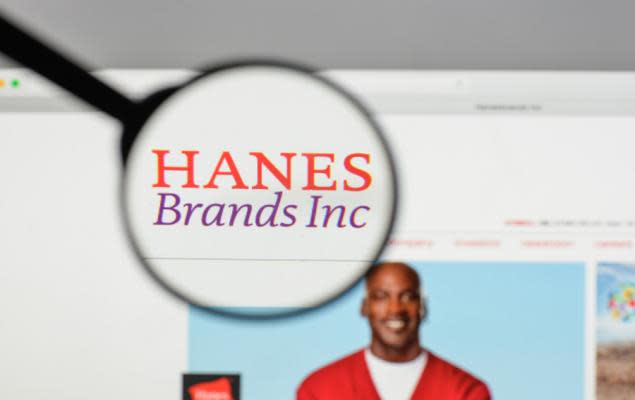