A sign warning Bolton residents to stick to the rules or face a lockdown – Paul Ellis/AFP Coronavirus Article Bar with counter .. Health officials have issued an urgent plea to stop the public going to the Royal Bolton Hospital’s A&E department following a surge in requests for Covid-19 tests. […]

Health officials have issued an urgent plea to stop the public going to the Royal Bolton Hospital’s A&E department following a surge in requests for Covid-19 tests.

The town in Greater Manchester has the highest coronavirus infection rate in England, with the equivalent of 192 new cases per 100,000 people recorded in the week to Sept 10.

In the last few days, 100 people have turned up at accident and emergency wanting to be tested.

Professor Donna Hall, chair of Bolton NHS Foundation Trust, said: “This failure of the test and trace system is placing huge pressure on the NHS and social care.

“I’ve felt that there has been a real lack of a cohesive strategy for the whole containment of Covid-19 and for test and trace.”

Robert Buckland told Sky News, he said: “I’m not shying away from the current issue but what I’m trying to explain is that rather than us sitting back and pretending all is well, we have accepted the scale of the challenge, we’re ramping up the test centres, we have increased laboratory capacity, new labs coming on-stream so we can get that quick turnaround.”

He added: “The fact the Government kept on saying about the dangers of a second wave, at all times the Prime Minister, all of us, were absolutely focused on the dangers of the second wave – we have seen what’s happening in France.

“We absolutely are onto this in terms of understanding that through the autumn, if we are to get the balance between getting the economy back on track and getting children into school, then all of us now have a special responsibility to follow all those guidelines and do whatever it takes to beat this virus.”

The Office for National Statistics (ONS) said the Consumer Prices Index tumbled from 1% in July to 0.2% in August – the lowest rate since December 2015.

Chancellor Rishi Sunak’s popular Eat Out to Help Out discount last month to encourage people to eat out again after lockdown was the biggest driver in pushing down the rise in the cost of living by slashing prices in restaurants and cafes.

The ONS also said the cut to value added tax (VAT) on hospitality and tourism from 20% to 5% helped lower inflation.

It added that air fares fell in August for the first time on record as the pandemic saw more Britons holiday in the UK this summer.

Justice Secretary suggests children should be prioritised in testing

Robert Buckland said the Government was facing “real challenges” on coronavirus testing and suggested that school children and their parents would be the next testing priority after NHS and social care workers.

It comes as people opted to turn up to hospital A&Es on Tuesday in a bid to get a Covid-19 test due to a lack of available bookings through the online system.

“I think the announcement by (Health Secretary) Matt Hancock yesterday to create a prioritisation system is the right thing to do,” Mr Buckland told Sky News.

“He is going to develop that very quickly over the next few days, to explain to us what that looks like but I think… it has to be the NHS first and then social care.

“And then I think what we need to do is have a cascading system where we know where our priority should be and for me priority should be for children in school and their parents in order to ensure their lives are safe and also importantly they are not disrupted in the way we are seeing.”

Boris Johnson’s armies of Covid-secure marshals are unlikely to make an appearance on a high street near you anytime soon after councils revealed they had no plans to enact such a scheme.

The Prime Minister announced last week that marshals would be introduced in towns and city centres to help enforce the new “rule of six” social distancing law, and could either be volunteers or members of council staff, but there was no offer of extra funding.

Mr Johnson said the marshals would “boost the local enforcement capacity” although it later emerged they would have no enforcement powers.

Local authorities reacted with indignation and a Telegraph analysis confirmed that the vast majority have no intention of even attempting to create such roles without a much-needed cash injection.

Children face being turned away from coronavirus testing centres

Matt Hancock, the Health Secretary, has introduced rationing and said the country’s testing crisis could take “weeks” to sort out.

He said there would be “prioritisation” of tests for people with acute clinical needs – such as hospital patients – and those in social care, as he acknowledged “operational challenges” in the system.

Until now, the Government has stressed that anyone who needs a test can get one, but Mr Hancock made it clear that, for the first time in months, tests would be rationed “once again”.

It came as teachers, parents’ groups and businesses warned that the Government was putting the country into “lockdown by default” because children and workers cannot get tests (see graphic below for details of how the UK testing regime breaks down).

Nearly 15,000 impersonation scam cases were reported by UK Finance members between January and June 2020, an 84% increase compared with the first half of 2019.

Among these, more than 8,220 cases involved criminals impersonating the police or a bank, a 94% year-on-year upswing.

UK Finance also said the increase in impersonation scams appears to be partly driven by criminals pretending to offer grants related to Covid-19, or offering fake refunds for cancelled flights.

They may also be taking advantage of people working from home, by pretending to be from IT departments, for example, so they can remotely access victims’ computers.

Criminals may convince victims to make payments to them by pretending to be from trusted organisations such as the police, a bank, a utility company, or a government department.

In total, £58 million was lost to impersonation scams between January to June 2020, up 3% on the previous year.

Around 1,200 Labour councillors and mayors across the UK have written to the Prime Minister urging him to rethink plans to end the furlough scheme next month.

The politicians called for a targeted financial support scheme to prevent “mass unemployment” as the job retention scheme stops.

The campaign demands that the Government sets up a financial support system that targets industries worst hit by the pandemic and ensures incomes for people who are forced to self-isolate.

Boris Johnson will face a grilling from senior MPs amid a warning that the “failure” of the test and trace system is placing “huge pressure” on the health service.

As the system struggles to cope with soaring demand, people have been turning up to accident and emergency to ask for Covid-19 tests.

The Prime Minister will face deputy Labour leader Angela Rayner for PMQs at noon because Sir Keir Starmer remains in isolation as he is “still awaiting” a coronavirus test result for a member of his family.

The Archbishop of Canterbury  said the Government should “only do centrally what must be done centrally” and it had “determined the daily details of our lives” during the coronavirus lockdown in a way “few of us have experienced”.

Writing in The Telegraph, the Most Rev Justin Welby said: “It makes sense to look instinctively for central direction in such an acute crisis, and we’re indebted to the roles many played in doing so, especially those who organised the NHS to cope with the increased demand.

“Within the Church there are lessons to be learnt about the role and importance of central guidance and its crucial interplay with government rules that exist for the benefit of all.

“But with a vaccine still far from certain, infection rates rising and winter on the horizon, the new normal of living with Covid-19 will only be sustainable – or even endurable – if we challenge our addiction to centralisation and go back to an age-old principle: only do centrally what must be done centrally.”

Cases continue to fall in Victoria

Australia’s state of Victoria appears on course to relax an extended hard lockdown in its capital Melbourne by the end of the month.

Average cases over the past two weeks in Melbourne fell below 50 – the benchmark the state set to start easing curbs.

Construction sites, manufacturing plants, warehouses and childcare facilities can reopen, allowing more than 100,000 workers to return to their jobs, if the 14-day rolling average is under 50 cases as of September 28.

However, people will still be limited to moving around in a 5km (3 mile) radius around home and only allowed outside for two hours a day for exercise, with a curfew from 9pm to 5am.

“We have to see this through. We absolutely do. Because if we get ourselves in a situation where frustration gets the better of us … then we can open, but we won’t stay open for very long,” Victorian Premier Daniel Andrews said.

Victoria reported eight deaths from Covid in the past 24 hours and 42 new cases, down from highs above 700 in early August.

Trump: Vaccine is ‘weeks away’

President Trump has claimed that a vaccine against the deadly coronavirus could be three or four weeks away.

Mr Trump, speaking at a town hall hosted by ABC News in Philadelphia, defended his handling of the coronavirus crisis, and said a vaccine could be ready for distribution soon.

“We’re very close to having a vaccine,” he said.

“If you want to know the truth, the previous administration would have taken perhaps years to have a vaccine because of the FDA and all the approvals. And we’re within weeks of getting it. You know, could be three weeks, four weeks.”

Mr Trump was underscoring predictions made by US public health officials and Pfizer Inc earlier this month.

Boozy Britain: how the nation drank in lockdown

From money worries and health anxiety, to juggling childcare and being separated from loved ones, there is much about the pandemic that has given us reason to drink.

So a new report that shows Britain has hit the bottle during lockdown and is now facing a “looming addiction crisis” comes as little surprise.

The Royal College of Psychiatrists published a report this week that found the number of people drinking at “high risk” levels has doubled to almost 8.5 million since February.

Six writers share how lockdown changed their relationship with alcohol.

Apple will study if a sensor on its new Apple Watch is capable of monitoring early signs of Covid-19 in a tie-up with medical researchers.

The Apple Watch Series 6, which the tech company unveiled on Tuesday, features an oxygen monitor that uses LEDs to measure the light reflected back from blood.

Blood oxygen levels are typically used as a measure of fitness and heart health, reflecting how well red blood cells carry oxygen from the lungs to the rest of the body.

Apple said it would also investigate whether the indicator as well as the Apple Watch’s heart rate monitor, could be used to detect early signs of influenza and Covid-19.

Wed Sep 16 , 2020
BEIJING (Reuters) – The chairman of cash-strapped HNA Group has been barred from taking flights and high-speed trains and going on vacations due to the Chinese conglomerate’s failure to pay a court-ordered $5,300 in a lawsuit, a court document showed. The once high-flying company, which owns Hainan Airlines <600221.SS>, is […] 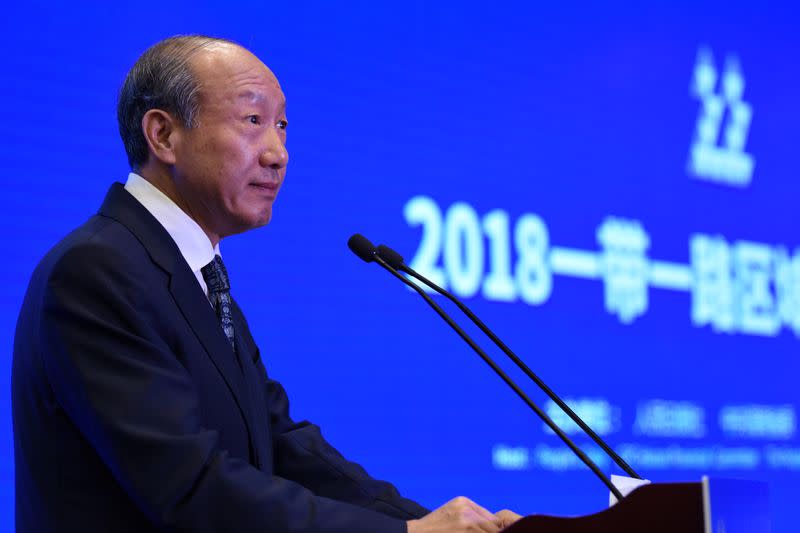