Boris Johnson during the video talks with the presidents of the three major EU institutions and Michel Barnier, the bloc’s chief negotiator. – Andrew Parsons/Downing Street Boris Johnson has called on the three EU presidents to put a “tiger in the tank” of Brexit negotiations and said he sees “no […]

Boris Johnson has called on the three EU presidents to put a “tiger in the tank” of Brexit negotiations and said he sees “no reason” why a deal cannot be done in July.

There was renewed optimism in London and Brussels about the prospects of finally breaking the deadlock over fishing, the level playing field guarantees and the European Court of Justice after the video call, which was held online because of the coronavirus pandemic.

“I don’t think we are actually that far apart,” the Prime Minister said, “but what we need to see now is a bit of oomph in the negotiations.”

“The faster we can do this, the better. We see no reason why you shouldn’t get that done in July,” the prime minister said after hour long talks with the presidents of the European Commission, Council and Parliament.

“I said to the three presidents, put a tiger in the tank because it is very clear what the UK needs and our EU friends need,” Mr Johnson said after the meeting where both sides renewed their commitment to striking a zero tariff, zero quota free trade deal before the end of the year.

“Ready to put a tiger in the tank but not buy a pig in a poke,” tweeted Charles Michel, the president of the European Council, after the video call with the prime minister where the EU restated its red lines but said it was ready to go to every effort to break the impasse. Both sides agreed to an intensified schedule of talks in July and August before the meeting

Mr Johnson did not set the three EU leaders a July deadline in the discussions, which were set up to evaluate progress in the free trade talks.

With EU leaders distracted by the coronavirus crisis, diplomatic sources said a breakthrough was more likely to come in October, which would give MEPs time to ratify the deal, but admit the real deadline is one minute to midnight on New Year’s Eve.

Mr Johnson said: “I certainly don’t want to see this going on into the Autumn and Winter as perhaps in Brussels they would like. I don’t see any point in that so lets get it done.”

Ursula von der Leyen, the president of the commission, said EU fishermen needed the predictability of a long term fishing deal rather than the annual negotiations over fishing opportunities favoured by Britain.

Mr Johnson told Mrs von der Leyen he understood the EU’s concerns but pointed out that a majority of UK fishing communities voted for Brexit and to take back control of British waters.

“We’ve got to make sure our fishery communities around the country get advantage of […] our fantastic marine wealth,” he said later.

Mrs von der Leyen admitted that some of the EU’s demands over the level playing field guarantees were unprecedented.

The call for commitments that would prevent the UK from undercutting EU standards on tax, labour rights, environment and state aid are more stringent than similar commitments in the bloc’s trade deals with Canada and Japan.

But the commission president warned Mr Johnson that unless the UK agreed to level playing field guarantees, which she said would also protect British businesses, the trade deal would never be ratified by the European Parliament or the EU member states.

“We can’t leave the EU and remain somehow controlled by EU law that isn’t going to work but there is a good deal to be done,” Mr Johnson said.

Mrs von der Leyen told the prime minister there was no need to change the negotiating mandate given to Michel Barnier by the heads of state and government of the remaining 27 member states in order to find the necessary compromises.

Mr Johnson reassured the EU presidents that he remained committed to the political declaration, which is a joint document setting the terms of the trade negotiations. Michel Barnier, the EU’s chief negotiator, has repeatedly accused the UK of reneging on commitments made in the declaration.

Mr Johnson will today make a statement to the House of Commons about Global Britain, in which he is expected to give an upbeat assessment of the UK’s future as an independent trading nation outside the EU.

Mr Johnson will tomorrow make a statement to the House of Commons about Global Britain, in which he is expected to give an upbeat assessment of the UK’s future as an independent trading nation outside the EU.

Part of the reason for conducting trade negotiations with countries like the US and Japan at the same time as dealing with Brussels is to put pressure on the EU to give Britain a good trade deal to avoid British money being spent elsewhere.

Disrupting the Industry and Its Own Business

Tue Jun 16 , 2020
CarMax Inc. (NYSE:KMX), the largest retailer of used cars in the United States, is now in the second year of its omnichannel strategy, “omnichannel” referring to the integration of online and traditional retailing. If well executed, the strategy promises a seamless integration between the online experience and the brick-and-mortar experience […] 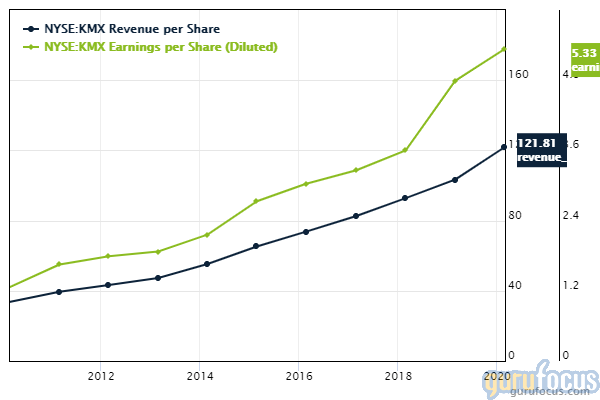