amalfi coast – iStock Analysis by Telegraph Travel has revealed that Britons can now visit just 12 places without restrictions following the removal of Slovenia and Guadeloupe from the quarantine-free list. Holidaymakers can now travel to Italy, Germany, Turkey and the majority of Greece without having to self-isolate on arrival […]

Analysis by Telegraph Travel has revealed that Britons can now visit just 12 places without restrictions following the removal of Slovenia and Guadeloupe from the quarantine-free list.

Holidaymakers can now travel to Italy, Germany, Turkey and the majority of Greece without having to self-isolate on arrival or return.

Less popular tourist destinations such as San Marino, Gibraltar, Liechtenstein and Greenland are also open for business, as are Sweden, Denmark, Poland and Slovakia.

A further 12 destinations are feasible options, requiring Britons to show evidence of a negative PCR test, or else take submit to being tested on arrival.

These include Madeira, the Azores and Cyprus, alongside several Caribbean countries including Barbados, Bermuda and St Lucia.

The rest of the world, including new ‘travel corridors’ Thailand and Singapore, is not an option for ordinary holidaymakers, with many countries keeping their borders closed to commercial travel while the Covid-19 pandemic continues.

Spain, France, Croatia, Malta, and a small number of Greek islands have all been struck off the ‘green list’ of quarantine-exempt destinations in recent weeks, sparking frantic scrambles among UK holidaymakers as they rushed to get home before quarantine rules came into effect.

Scroll down for more updates

Scientists have varied opinions on whether Swedes have developed greater immunity to the virus, are better at social distancing, or if other factors will turn out to be more relevant to the country’s downward curve, writes Maddy Savage.

But many agree that the consistency of the measures in Sweden – where restrictions have been minimal – has contributed to a calmer public mood here than in the UK.

That might prove another incentive for British tourists seeking a respite from the new rule-of-six, just in time to see Sweden’s forests burst into their autumn colour palette.

The relaunched Thomas Cook brand will see bricks-and-mortar travel shops return to the high street – but not in the UK.

The company, which collapsed last year, was revived as an online travel agency in China in July by the Shanghai-based Fosun Tourism Group, and rolled out in the UK earlier this month.

Fosun has now confirmed that it will start to open Thomas Cook stores in China, with the first expected to launch in Shanghai in early 2021.

What is the point of a ‘travel corridor’ with a country we can’t even enter?

Thailand and Singapore have the ‘green light’ – but this ultimately means nothing, says Lottie Gross.

Thailand has all but closed its borders to foreign visitors. Unless you’re a diplomat, have permission directly from the Prime Minister (does anyone have a number, by the way?), or have a specific type of visa or a handful of other niche circumstances, you’re simply not allowed in. And anyone that is allowed has to follow a rigorous exercise in bureaucracy and begging.

In Singapore, short term visitors from anywhere are banned – unless you have extenuating circumstances. Does an increasingly incompetent and frankly dangerous government count, I wonder?

Fears for UK tourism if ‘circuit break’ lockdown is declared

Many domestic tourism firms are banking on the approaching October half term to relieve the financial damage of lockdown.

But with the prospect of a second ‘circuit break’ lockdown looking increasingly likely, there are fears that it could ‘spell disaster’ for the industry.

“We are already incredibly worried. Uncertainty around potential new restrictions is already undermining public confidence as families are simply holding back on planning days out at UK attractions. If there is a tightening of restrictions ahead of the October half term, then it could spell disaster for many tourism businesses who were relying on the increased trade. These are tourism businesses who were already struggling to survive following the national lockdown. “We are hoping for the best and are working hard to reassure the public that all of our visitor attractions are completely safe. We’ve implemented strict social distancing measures and installed additional sanitising stations. People having been enjoying Heritage Great Britain’s attractions safely since they reopened, we’ve got to continue trading for as long as we can.”

Homecoming in sight for stranded Australians

Over 25,000 stranded Australians will be allowed to return home when strict travel caps are relaxed later this month.

Australia has had a limit on the number of people allowed to enter the country since July – a measure intended to relieve pressure on the country’s quarantine system, but which has left thousands of Australian travellers and emigrants unable to return.

Now Prime Minister Scott Morrison has announced that the cap will be raised from September 28, allowed over a thousand extra arrivals each week.

Which countries are at risk?

With Slovenia and Guadeloupe having been removed from the UK’s quarantine-free travel list, there are now even fewer holiday options for Britons that don’t require a bout of self-isolation, and, with cases rising across Europe, more destinations could lose their “travel corridors” in the coming weeks.

Ryanair has announced that it will cut its October flight capacity down to 40 per cent of 2019 levels thanks to ‘Government mismanagement’.

The airline has pointed the blame at EU governments for their ‘damaging’ travel policies, claiming that customers are unwilling to book thanks to flight cancellations and ‘defective’ quarantine restrictions.

“We are disappointed to reduce our October capacity from 50 per cent of 2019 to 40 per cent. However, as customer confidence is damaged by Government mismanagement of Covid travel policies, many Ryanair customers are unable to travel for business or urgent family reasons without being subjected to defective 14 day quarantines.While it is too early yet to make final decisions on our winter schedule (from Nov to Mar), if current trends and EU Governments’ mismanagement of the return of air travel and normal economic activity continue, then similar capacity cuts may be required across the winter period.”

The Government has launched a new campaign to help UK holidaymakers plan their post-Brexit trips to the EU, with rules on passports, driving and pets all set to change.

With the Brexit transition period set to end on January 1, Britons heading to EU countries in 2021 (as well as Switzerland, Norway, Iceland and Liechtenstein) will be subject to extra checks and regulations.

Passports will have to be less than 10 years old, and must be valid for at least six months from departure, while travellers are also being advised to check health insurance requirements for next year, since European Health Insurance Cards will no longer be valid.

Some EU countries do not recognise UK drivers licences, and any holidaymakers wishing to drive will need to obtain an International Driving Permit.

Pet-owners face some of the most daunting rule changes: EU pet passports will be rendered invalid after Brexit, and anyone wishing to take a cat or dog into Europe will have to complete a four-month application process.

The Government is also warning that UK travellers will no longer automatically receive free data-roaming, although most mobile networks have confirmed they will not introduce charges.

Read more: How travel to Europe will change after Brexit

Can I visit Thailand or Singapore?

Despite being added to the travel corridors list, the Foreign Office says:

Short-term visitors from anywhere in the world are not able to enter Singapore. Long-term pass holders and dependants need approval before entering Singapore. Everyone granted permission to enter Singapore will be issued with a 14-day Stay at Home Notice (SHN).

At present only certain categories of foreign nationals are permitted to enter or transit Thailand.If you’re eligible to enter, you will be subject to a 14-day state quarantine at a Thai government-designated facility at your own expense.

There was a reprieve for Denmark during the UK’s travel corridor update yesterday, with the Scandinavian country still on the quarantine exemption list despite having a higher Covid infection rate than Slovenia, which was placed back on the ‘red list’.

Paul Charles, chief executive of travel consultancy The PC Agency, has lambasted the Government’s ‘inconsistency’ in following its own rules, under which quarantine restrictions are reimposed if a country’s weekly case rate rises above 20 per 100,000 people.

“The Denmark decision shows a lack of consistency – it has a similar profile to Portugal with a rapid increase in infections, test positivity under three per cent and a rate above the government’s own criteria,” he told The Independent.

“So why is Portugal on the quarantine list but Denmark isn’t?

“Furthermore, it is remarkable that there isn’t one country in Africa you can visit without having to quarantine on your return to the UK for 14 days.”

The entire continent is on the UK’s ‘red list’, despite many African countries reporting case numbers below the UK’s threshold.

Where can I go on holiday now?

The loss of Slovenia means there are just 12 destinations that Britons can visit without any restrictions, plus a further 12 relatively feasible options:

What did we learn yesterday?

A recap of yesterday’s lead stories.

Now, on with today’s news.

US seniors turn to Zoom to connect with friends and family

Fri Sep 18 , 2020
Photograph: Nacho Doce/Reuters In his 72 years, Brad Veloz has risked his job and overcome health issues to fight for LGBTQ+ and Latino rights. The coronavirus wasn’t going to stop his activism. A year ago, the self-described “in-your-face” activist had never even used Zoom online video conferencing, but it is […] 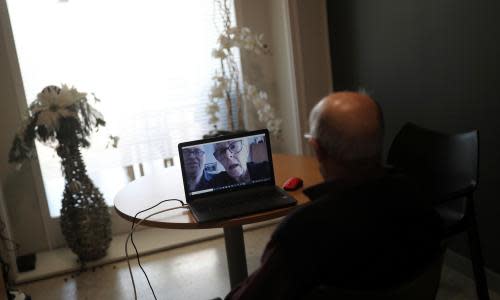