BURLINGTON COUNTY, NJ — While the coronavirus pandemic threatens to cancel ceremonies honoring the lives lost in the Sept. 11, 2001 terrorist attacks on the Pentagon and the World Trade Center, the opposite is happening in Burlington County. For the first time, Burlington County will host a countywide 9/11 Remembrance […]

BURLINGTON COUNTY, NJ — While the coronavirus pandemic threatens to cancel ceremonies honoring the lives lost in the Sept. 11, 2001 terrorist attacks on the Pentagon and the World Trade Center, the opposite is happening in Burlington County.

For the first time, Burlington County will host a countywide 9/11 Remembrance Ceremony, set for 10 a.m. Friday. It will take place outside the County Emergency Services Training Center in Westampton, where a piece of steel recovered from the fallen World Trade Center is displayed.

The county said it is hosting the remembrance in part because other 9/11 ceremonies might be cancelled due to the pandemic, and they wanted to make sure the anniversary didn’t come and go without being properly recognized.

“Also, with all the turmoil this year, we thought holding a remembrance ceremony would be a good way to demonstrate hope, unity and a common cause for our residents to get behind,” a spokesperson for the county said.

The service will feature a bagpipe processional, invocation wreath laying and the reading of the names and biographies of seven victims who lived in the county or had strong ties here. It will be streamed live on Burlington County’s Facebook page.

“Nineteen years have passed since that terrible day, but we remain faithful to our promise to never forget the innocent lives lost and the heroic actions and sacrifices made that day,” Burlington County Freeholder Director Tom Pullion said. “9/11 was a national tragedy, but one that united our entire nation as one family. With our country once again facing enormous challenges, it is even more important for us to come together again and remember that heroism and sacrifice.”

The county will honor the following victims of the attacks:

To date, more than 6 million Americans have tested positive for COVID-19, prompting community leaders to put in place extra precautions and enhanced safety measures at these annual events. While some communities are moving events online, others are canceling events out of an abundance of caution.

Services held at 9/11 attack sites will also look different this year because of the pandemic. Some have already faced a series of hurdles to go on as planned.

In New York, Gov. Andrew Cuomo plans to send state health personnel to New York City to provide supervision during the annual “Tribute in Light” ceremony, a commemoration of the 9/11 attacks on the World Trade Center.

Cuomo said staff will be on hand to “ensure this year’s tribute is held safely.”

Now, the focus of the New York City commemoration will be reading the names of victims. Family members will not read the names in person this year; instead, recorded readings from the museum’s In Memoriam exhibition will be used for the ceremony.

In Arlington County, Virginia, located just outside Washington, D.C., the 9/11 Pentagon Memorial remains closed to visitors because of COVID-19 restrictions. Arlington County typically holds an annual remembrance ceremony, which this year will be held virtually. Specific plans for this year’s service will be released the week of Sept. 11, according to county spokesperson Erika Moore.

In Pennsylvania, the National Park Service will hold an abbreviated ceremony at Shanksville. The 20-minute “Moment of Remembrance” is set to begin at 9:45 a.m., without a keynote speaker or musical guests.

The names of each passenger and crew member from Flight 93 will be read aloud with the ringing of the “Bells of Remembrance,” according to the agency’s website.

This article originally appeared on the Cinnaminson Patch

Wed Sep 9 , 2020
Blue Planet Studios The sudden stop of the global economy in 2020 has brought to everyone’s attention the interconnectedness of supply chains across countries and continents. Add to this the mounting tensions between the US and China, with President Trump now pushing for a decoupling from the Chinese economy as […] 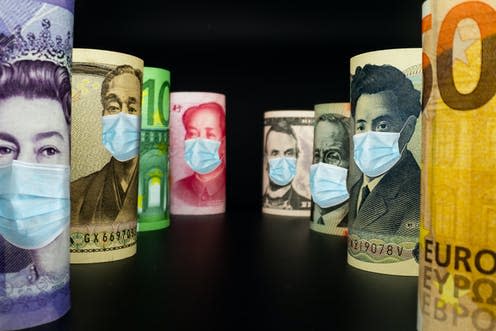