Text size William Hill’s board has indicated that the £2.9 billion offer—272p per share—is at a price that it would “be minded” to recommend to shareholders. Getty Images Caesars Entertainment said on Monday it is in “advanced discussions” with British bookmaker William Hill over a £2.9 billion ($3.7 billion) cash […]

said on Monday it is in “advanced discussions” with British bookmaker

over a £2.9 billion ($3.7 billion) cash offer, as the bidding war between the casino operator and buyout firm

William Hill stock fell 11.5% in London trading on Monday, after soaring more than 43% on Friday after news broke of the takeover offers.

The back story. FTSE 250 constituent William Hill announced on Friday that it had received takeover bids from Caesars and Apollo.

which made William Hill ESPN’s official odds supplier across its platforms.

A 2018 Supreme Court ruling paved the way for legal sports betting across the U.S., and William Hill has since emerged as a market leader.

While expanding its American and online operations, it has been forced to transform its British business. In August the company announced that 119 of its shops that closed due to the coronavirus pandemic wouldn’t reopen. Regulatory woes, including £2 stake limits on certain betting terminals, have hit performance at brick-and-mortar locations.

What’s new. Caesars said on Monday it has made it clear to William Hill that should Apollo succeed in acquiring the British betting company, it would terminate its contribution to the U.S. joint venture.

William Hill’s board has indicated that the £2.9 billion offer—272p per share—is at a price that it would “be minded” to recommend to shareholders. Under the terms of British takeover rules, Caesars has until Oct. 23 to announce a firm intention to make a bid, and the company said that any transaction would likely close in the second half of 2021.

The casino and hotel operator announced an equity capital raise of 30 million shares to help finance the possible offer, alongside existing cash and $2 billion in new debt. It estimates that, along with its iGaming business, the enlarged sports and online betting company formed by a takeover of William Hill could generate $600 million to $700 million in net revenue next year.

The possible offer also raises questions over the future of William Hill in the U.K. Caesars said that its intention would be to “seek suitable partners or owners” for non-U.S. operations.

Also: William Hill Is a Giant in U.S. Sports Betting—yet Its Stock Is Cheap, Analyst Says

Looking ahead. Caesars’ possible offer represents an 81% premium to the volume-weighted average price of William Hill stock for the three months to Sept. 24. But analysts say it is too low. There is a lot of money to be made in the U.S. sports betting market, William Hill stock has been grossly undervalued, and its U.S. assets alone could be worth more than the offer.

Investors looking forward to a fiery bidding war may be disappointed by Caesars’ apparent trump card: the casino operator’s willingness to put the lucrative U.S. joint venture on the chopping block if Apollo wins out. William Hill is an attractive proposition because of its dominance in the American market—and its partnership with Caesars is an integral part of that. It is difficult to see how Apollo could mount a more attractive offer if the company it is bidding for wouldn’t have the valuable rights granted to it by Caesars. Either way, Caesars’ announcement makes it the favorite to win the bidding war so far.

Comments? E-mail us at [email protected]

Tue Sep 29 , 2020
The BBB says sellers are claiming to make things “safer for you” by using a third party. Nope. GREENSBORO, N.C. — You want to buy something online, don’t we all these days, a big purchase like a used car, a computer, or a collector’s item. You know to use a […] 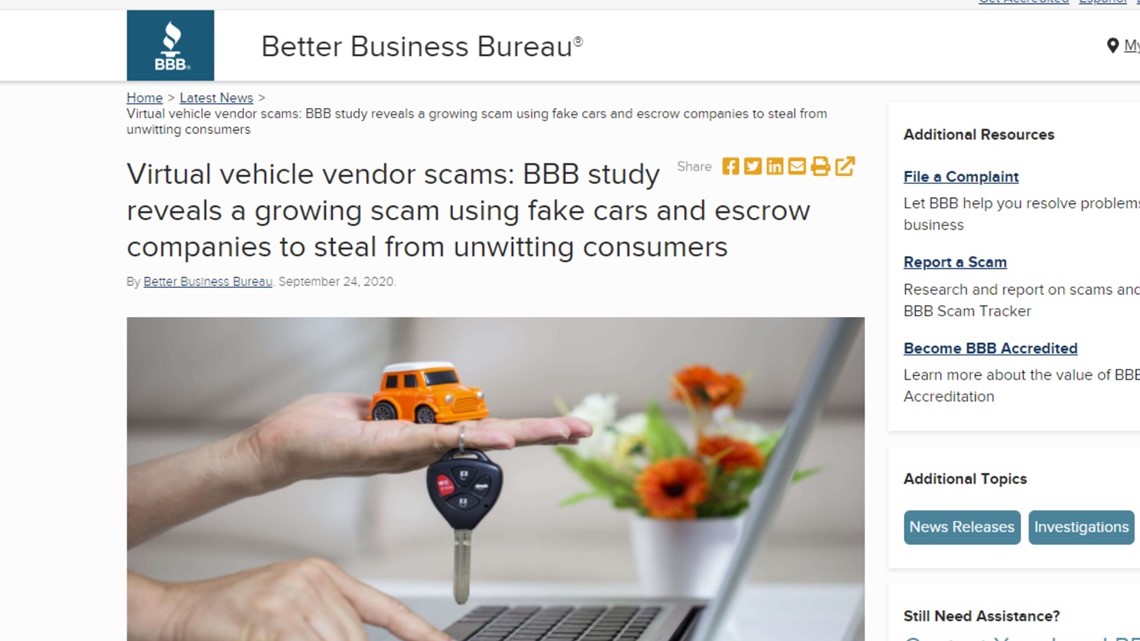