Photo credit: Hearst Owned From Town & Country The best part of having money, besides having money, is that people pretend to like you. All kinds of bad behavior—from mob ties to the hunting of endangered species—are ignored. Performing arts centers bear the names of philanthropists whose political views offend […]

The best part of having money, besides having money, is that people pretend to like you. All kinds of bad behavior—from mob ties to the hunting of endangered species—are ignored. Performing arts centers bear the names of philanthropists whose political views offend the operagoers inside. Jeffrey Epstein was welcomed back to parties after serving time for procuring an underage prostitute. Hall & Oates explained it in 1977, when they crooned, “you’re a rich girl, and you’ve gone too far, cause you know it don’t matter anyway.”

Dave Portnoy, the founder of Barstool Sports, who estimates his own wealth at $100 million, was called out in June by former ESPN host Jemele Hill for having said that Colin Kaepernick looks like an ISIS fighter and defending one of his salespeople for wearing blackface to a Halloween party. “I’m big. You’re little. I cancel you,” he responded. “I’m uncancellable.”

But in an era when statues of George Washington are being pulled down, can that still be true? Back in early 2016 the New York Times profiled billionaire David Geffen, then 73rd on Forbes’s list of the richest people in the world, and he told the paper flippantly to “write whatever you want.” This year, after posting a photo of himself and his 45-person crew aboard his $590 million yacht escaping the virus-ridden shores, he reacted to the backlash by reportedly deleting his Instagram account. (It’s back online now.)

Even Ellen DeGeneres, estimated by Forbes to have $330 million and by America as being super-nice, was threatened with cancelation. Back in March a comedian asked Twitter users for “the most insane stories you’ve heard about Ellen being mean.” Three thousand replies later, in July Buzzfeed ran an article in which former employees anonymously complained about a hostile workplace in which producers screamed, committed racial microaggressions, and groped employees. DeGeneres apologized to her staff and fired the show’s top three producers.

Ronn Torossian, the CEO of 5WPR, a public relations agency that often handles rich people with big problems, has seen social media lessen money’s ability to insulate. “Bill Gates is the quintessential billionaire doing good for the world. If Bill Gates is caught on tape saying [something terrible], you better believe he’s facing cancel culture.” He might keep his 66,000-square-foot house (24 bathrooms, six kitchens, one trampoline room), but he’d be there alone.

Social shaming on the internet seeps into everyone’s life. “We represent billionaires who couldn’t give a damn what the media says about them, but they care what their mistresses, wives, and family think,” Torossian says. Although, honestly, they also care what the media says about them. Torossian knows this, because they pay him a lot of money to care for them. “I work for multiple people on the Forbes list. I can’t say how many times they have wanted to threaten or investigate journalists. There are very few people on the Forbes 400 list who are passive pushovers.”

They’re losing the fight in ways they’re not accustomed to. “Jeffrey Epstein was isolated from accountability for decades, until he conveniently died in that jail in New York City. I’m not sure anything can permanently isolate you,” says Loretta Ross, a visiting associate professor of the Study of Women & Gender at Smith College who signed that Harper’s open letter. “Bill Clinton will never regain his pre-Monica cachet.” She thinks we should show some empathy on social media toward the guilty, even if they can afford Torossian. “I don’t start with the assumption that because someone is rich they haven’t suffered,” says Ross, who is finishing a book titled Calling In the Calling Out Culture: Detoxing Our Human Rights Movement.

Alice Dreger, an author and former professor of bioethics and medical history at Northwestern University who got canceled for some of her work on trans studies, has since heard from about 100 people who are going through a similar experience. She worries that some rich people don’t have strong personal networks to turn to diminish their identity crisis. “People who have houses in the Hamptons, is it possible they have no garden to tend,” she asks. “Is it possible to have lives that are so much about performance and being everywhere all the time that they don’t have a home with friends?”

She even worries about J.K. Rowling, the billionaire Harry Potter author who signed that Harper’s letter after being denounced by stars of the Harry Potter movies and an army of the books’ fans for an essay she wrote differentiating trans women from biological women. “Is it affecting her psychology? I suspect it is. It’s very unpleasant to have your fan base turn on you.”

(Indeed: In August, Rowling returned her 2019 Robert F. Kennedy Human Rights Award after foundation head Kerry Kennedy wrote, “J.K. Rowling’s attacks upon the transgender community are inconsistent with the fundamental beliefs and values of RFK Human Rights and represent a repudiation of my father’s vision.”)

Still, Dreger says that the rich have a better chance of making it through an attack. “When various people tried to cancel me, one of the first things I thought was, ‘My husband has a job and can pay the rent and I can get his insurance,’” she says. Expensive fences do still make good neighbors—allowing you to throw your own parties when your invitations dry up. Last year Warren Kanders (Forbes net worth estimate: $700 million) quit the board of the Whitney Museum of American Art after activists protested that his company, Safariland, sold tear gas to law enforcement.

But though he’s not going to Whitney board meetings, Kanders hasn’t been shunned by the art world. “He can be nudged out by the students at Brown, but Warren Kanders is still at Sant Ambroeus,” says Nate Freeman, a columnist for Artnet. “He’s at dinners for artists he collects. Dealers did not cut him out in any way.”

Meredith Clark, an assistant professor of the Black experience in U.S. media at the University of Virginia, thinks Barstool Sports founder Portnoy is right when he says that the megarich are still uncancelable. Rowling, after all, doubled down, releasing another essay in July about trans women and biological women being different. “J.K. Rowling is definitely insulated by virtue of her wealth. You’ve seen even folks like Daniel Radcliffe say he can’t be aligned with her, and she’s still holding on,” Clark says. Kanye West has been canceled for many infractions (implying slavery was a choice, supporting Trump, misogynistic lyrics, being mean to Taylor Swift), but he just cut a deal with the Gap. Jeff Bezos has been called out for mistreating employees any number of times, but he seems to be coated in a reasonably priced Teflon that can be shipped for free in just two days.

Even if Bezos is eventually shunned, social capital is too high on Maslow’s Hierarchy of Needs for Clark to feel bad about shaming those with seven zeros in their accounts. “There’s a huge difference of privilege between being rich and being canceled and being canceled for a regular person. As a professor with five-figure student loans, credit card loans, not having kids because I can’t afford them—if I get canceled before I get tenured, that’s it for me. There’s no relocating and starting my life in another county.”

'The question is whether colleges can bring them under control'

Tue Sep 8 , 2020
Hundreds of colleges across the U.S. are forging ahead with open campuses despite various coronavirus outbreaks early in the semester. “I think it’s fair to have expected a lot of cases on campus,” Robert Kelchen, associate professor of higher education at Seton Hall University, told Yahoo Finance. “The question is […] 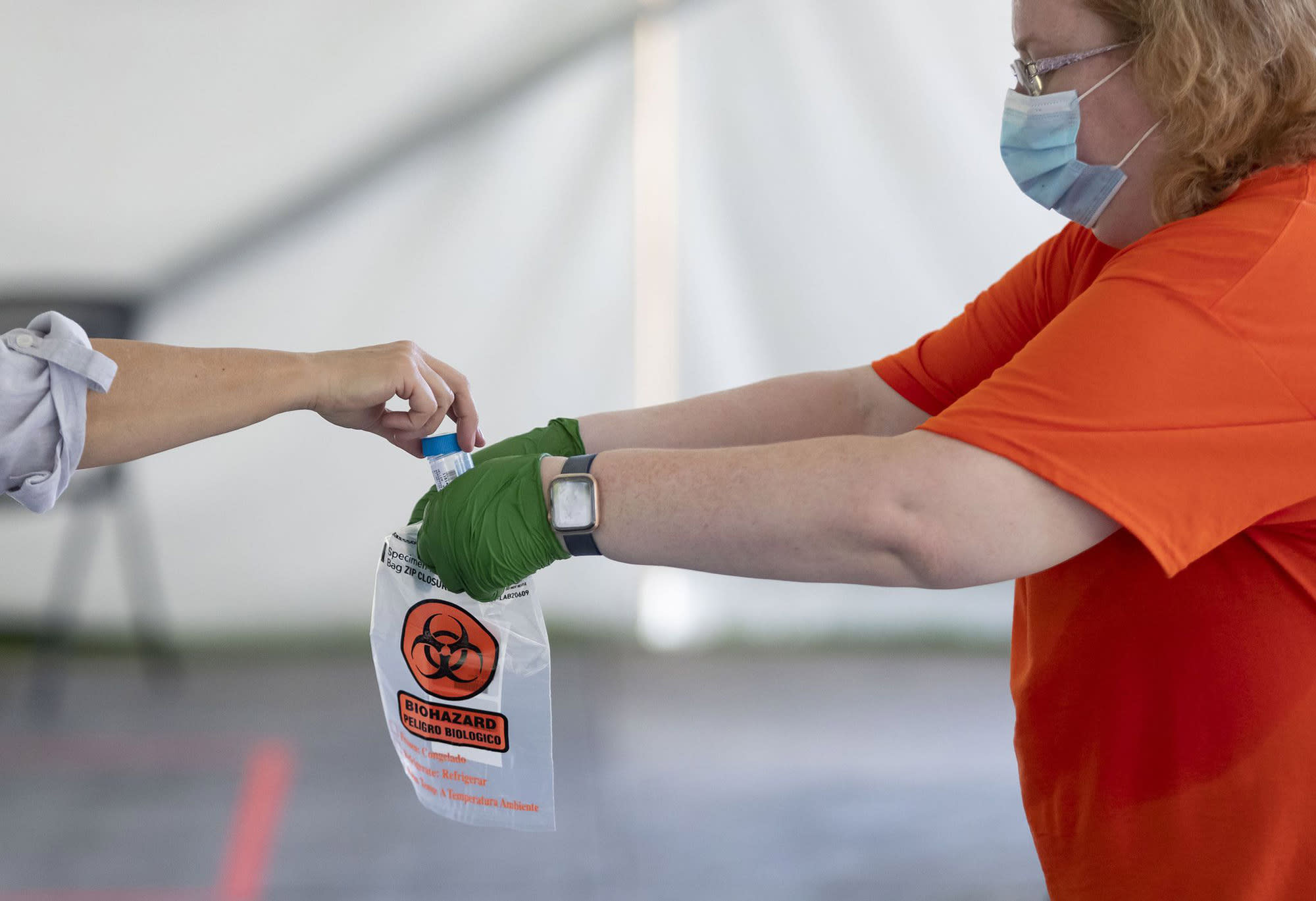