While school districts all over the country grapple with how to best educate youth this upcoming academic year during a global pandemic, one Michigan teen sits in a juvenile detention center with no prospect of returning to in-person or remote learning anytime soon. The 15-year-old, identified only as Grace, has […]

While school districts all over the country grapple with how to best educate youth this upcoming academic year during a global pandemic, one Michigan teen sits in a juvenile detention center with no prospect of returning to in-person or remote learning anytime soon. The 15-year-old, identified only as Grace, has been in jail since May because she violated the terms of her probation by not completing her online coursework, according to a new report co-authored by ProPublica Illinois and the Detroit Free Press.

Grace, who is Black and has diagnosed ADHD, was on probation for fighting with her mom and stealing a cellphone from a classmate. After her school transitioned to remote learning on April 15, Grace said she felt unmotivated and overwhelmed by the work for her school, located in the predominantly white community of Beverly Hills, Mich.

That’s true of many students displaced from their schools, but, calling Grace a “threat to [the] community,”Judge Mary Ellen Brennan, the presiding judge of the Oakland County Family Court Division, sentenced the teen to Children’s Village juvenile detention on May 14. Now, Grace’s mother, Charisse, and advocates accuse the courts of racial bias.

“It just doesn’t make any sense,” Charisse told ProPublica. “Every day I go to bed thinking and wake up thinking, ‘How is this a better situation for her?’”

“That’s just a total devaluation of Black lives,” Shaun Gabbidon, professor of criminal justice at Penn State Harrisburg told Yahoo News. “We see this in countless other areas of the justice system.”

Grace’s teacher, Katherine Tarpeh, has also come to the teen’s defense. Tarpeh argues that Grace’s performance during the pandemic was “not out of alignment with most of my other students.”

Last Thursday, the Michigan Supreme Court said it is reviewing the circumstances of Grace’s case, after attorneys filed a motion in court seeking an emergency review.

That evening, in a rally organized by the Michigan Liberation organization, more than 200 people stood outside the Oakland County Court chanting, “Grace for Grace” and held signs that read “#FreeGrace”.

Their message was, while they fight for Grace, this is bigger than any one teen. No child should be treated like this.

“Racism doesn’t have a ZIP code,” Rai LiNear, Wayne County director for Michigan Liberation told Yahoo News. “Bad judicial and prosecutorial practices don’t show how much money you make, how many languages you speak, nor all the places you’ve been. We have a real deep divide when it comes to the way that we treat our Black youth, and it starts in the schools.”

Many students have struggled with the adjustment to remote learning. The average student could begin the upcoming school year having lost as much as a third of the expected progress from the previous year in reading and half of the expected progress in math, according to a working paper from NWEA, a nonprofit organization, and scholars at Brown University and the University of Virginia.

The learning gap is wider in districts where the wealth and economic gap is greatest. There are relaxed expectations on teachers and students in poorer neighborhoods and districts and disparities in computer access and home internet access. In another analysis of 800,000 students reported by the New York Times, researchers at Brown and Harvard looked at how Zearn, an online math program, was used both before and after schools closed in March. It found that through late April, student progress in math decreased by about half in classrooms located in low-income ZIP codes, by a third in classrooms in middle-income ZIP codes and not at all in classrooms in high-income ZIP codes.

The struggles with remote learning extend beyond high school and beyond just Black students. Ojmarrh Mitchell, an associate professor of criminology and criminal justice at Arizona State University, said his undergraduate and PhD students last semester had their own issues adjusting to virtual learning. “These are the students who were the most motivated, and they had problems adjusting,” Mitchell told Yahoo News. “I had problems adjusting. It was a fiasco, but we constantly changed what we were going to do to fit the situation and make the best situation.”

Even apart from the strains imposed by remote learning, Black students are disciplined and arrested at school at disproportionately high levels, an analysis of federal data from 2017 by the Education Week Research Center finds. “In 28 states, the share of arrested students who are Black is at least 10% higher than their share of enrollment in schools with at least one arrest,” the report found. “In 10 of those states, that gap is at least 20%.”

According to a 2018 report from the U.S. Government Accountability Office, Black youth are “15.5% of all public school students, but represented about 39% of students suspended from school”.

Black children are forced to understand at a young age that the world may view them as a threat. “I think many Black children realize once they become older that their childhoods ended around 10 years old,” LiNear said. “The ending of that period of childhood was through a lot of cases introduced through the school environment, like getting detentions, getting suspended … or a child being separated and having to stand out in the hallway. These are ways that we are starting to, you know, introduce the idea of policing within our schools.”

An analysis of 4,800 cases that were referred to the Oakland County Circuit Court from January 2016 to June 2020 found that 42% involved young Black people, who make up just 15% of the county’s population.

The school-to-prison pipeline has been well documented as a reality for many young students of color, particularly Black students. A National Juvenile Justice Network report notes, “students find themselves on a fast track to jail due to school policies such as zero-tolerance disciplinary policies, in which many youth are pushed out of school (suspended or expelled) as well as sent to the juvenile justice system for petty disciplinary matters.” Black students are three times more likely to be suspended or expelled than white students, according to the Education Department’s Office for Civil Rights.

The pipeline is often enforced by school resource officers, or SROs, who are assigned to schools to play the role of school police. But for many critics, there is too much ambiguity in their daily assessments. “Policing of schools is very skewed,” said Kerrison. “Having a school resource officer is not a remarkable thing … but the way they respond is where you see variation.” This ‘variation’ was on display in October 2015 when a South Carolina high school SRO was caught on video slamming and dragging a young Black girl from her desk for refusing to stop using her cellphone and leave the classroom as her teacher had directed. The officer was fired after the FBI and the U.S. Attorney’s Office had opened a civil rights investigation into the incident.

“None of this is surprising despite how disappointing and unsettling it is,” said Erin Kerrison, assistant professor at the University of California at Berkeley. “It lays bare that this is a chronic issue.”

Kerrison added, “If [Grace is] missing class … wouldn’t you want to find out why? The leap to truancy court as opposed to identifying why this child isn’t coming to school is a special kind of punishment reserved for Black students.”

The issues don’t stop there. A Washington Post column written by two university professors last week suggest that schools don’t act as a pathway to prison, but in many ways they are prisons for Black youth. “We are witnessing a school-prison nexus: Schools work within a web of institutions, policies, and practices that funnel Black youth into prisons,” Subini Annamma of Stanford University and David Stovall of the University of Illinois at Chicago note. “What’s more, depending on where you attend school, it no longer operates as a ‘pathway’ to prison but instead as a de facto prison.”

Mitchell adds that there is too much discretion given to judges when it comes to sentencing juveniles. “Unlike the criminal justice system for adults, there are relatively well drawn out, well-prescribed characteristics that determine how your case will be handled,” he said. “But in the juvenile justice system, they have all the same concerns as the criminal justice system and then this nebulous squishy idea of best interests of the child. And that’s where a lot of the drama comes in.”

Gabbidon says this contributes to a vicious cycle for many Black youth. “We know that the more people have contact with the system, the more there’s likely to be a bad outcome,” he said. “It doesn’t necessarily help them. We should be doing everything we can to keep people out of the system, especially in a pandemic” in which prisons are breeding grounds for coronavirus.

Michigan Liberation is mobilizing against racism in the school and justice systems, using Grace as an example. It promotes comprehensive criminal justice reform, including courts, prosecutors, policing, prisons, juvenile systems, re-entry and diversion programs, and parole. “Folks will have to continue to organize together, come out to the streets, put public pressure on the judge, on the prosecutor’s office and stand in solidarity with Grace,” LiNear said. “I think that there is also a couple of weeks of very real-time action that folks can take, [before] the Michigan primaries,” which will be held on August 4.

On Monday, the Oakland County Court held a special hearing for Grace. Supporters gathered outside the courthouse hoping for her release. Instead, Judge Brennan chose to hold the case in review until September.

Cherisie Evans, a Michigan Liberation core member leader, was present outside of Monday’s hearing. She says that she believes if Grace were white, “she wouldn’t be in jail that long or at all.” As a lifelong resident of Michigan, Evans, 43, can’t make sense of why this is happening. At 14, Evans said she stuck up a pizza delivery man and was sentenced to two months in juvenile detention. Grace is going on three. “I don’t understand,” said Evans, who is now a home-owner, college graduate and entrepreneur.

For many academics and policy experts, stories like Grace’s are the stories of many Black youth across the country.

“It was already hard to show up to chemistry [for young people],” said Kerrison. “When you add remote learning, it’s harder to equitably provide learning and unless we reckon with this, we will have a Grace over and over again.”

The global sneaker resale market could reach $30 billion by 2030

Tue Jul 21 , 2020
A little over a year has passed since Cowen Equity Research classified sneakers as an emerging alternative asset class. Since then, sneakers have not only emerged, but the market itself shows no signs of slowing. Cowen analysts believe that the sneaker resale market could potentially reach $30 billion by 2030. “With […] 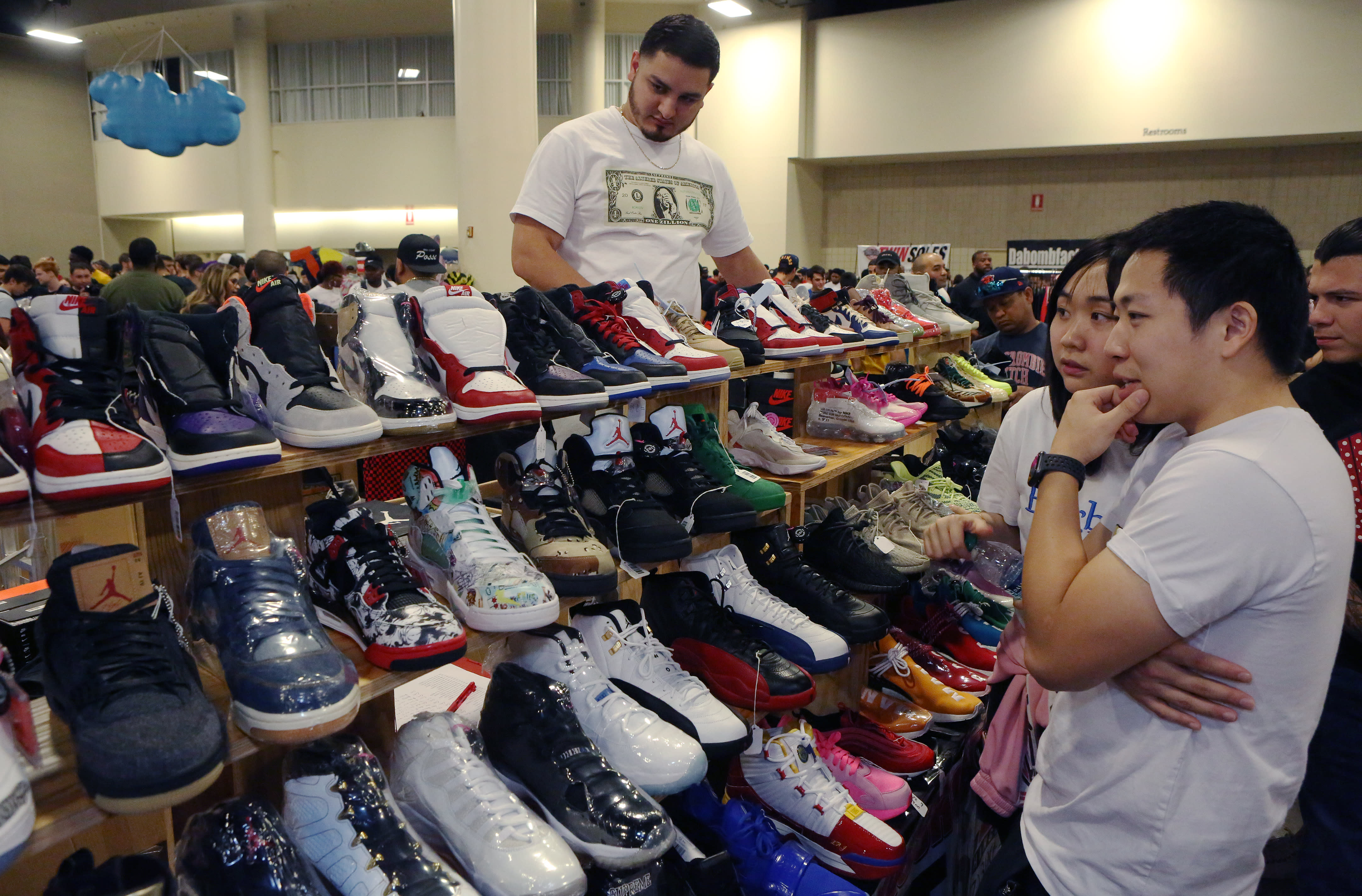