The Centers for Disease Control and Prevention has changed its COVID-19 testing guidelines and now says people without symptoms “do not necessarily need a test” – even if they’ve been exposed to COVID-19. The move comes a week after the CDC updated travel guidelines that no longer mandate a 14-day quarantine for […]

The Centers for Disease Control and Prevention has changed its COVID-19 testing guidelines and now says people without symptoms “do not necessarily need a test” – even if they’ve been exposed to COVID-19.

The move comes a week after the CDC updated travel guidelines that no longer mandate a 14-day quarantine for anyone who’s traveled outside of their state or the country. The revisions to CDC guidelines have been met with concern by medical experts, who caution that less testing may lead to more cases and hinder contact tracing efforts.

Tensions between the federal government and scientists remain high: Earlier this week, some doctors spoke out against the approval of blood plasma as a COVID-19 treatment, saying  the Food and Drug Administration offered shaky data to justify its approval of the treatment.

Meanwhile, efforts to learn more about how the virus spreads remain unwavering. Researchers in Massachusetts are tracking the number of cases linked to “superspreader” events — such as weddings, parties and conferences — which could help states decide what events or activities are safe during the ongoing pandemic.

📈 Today’s numbers: The U.S. has more than 5.7 million confirmed infections and 178,000 deaths. Worldwide, there have been more than 820,000 deaths and 23.9 million cases, according to John Hopkins University data.

📰 What we’re reading: College administrators nationwide are welcoming students back to campus with strict mask guidelines and plenty of online class offerings. But as schools reckon with the possibility of cancelling in-person fall semesters, students are taking matters into their own hands if their campus is forced to shut down.

Gov. Tom Wolf is calling on the Pennsylvania legislature to legalize recreational marijuana and use the tax revenue to help small businesses that have been impacted by the coronavirus pandemic.

The pandemic has steered Pennsylvania’s economy into a recession. And although programs such as the Pandemic Unemployment Assistance and the Paycheck Protection Program have helped some, Wolf said, more needs to be done.

“The legislature can act right now to get us back on track as quickly as we possibly can,” Wolf said at a news conference Tuesday.

He wants to see more money provided to front-line workers and working parents, as well as more grants created to support small businesses. These efforts could be funded, he said, with the $1.3 billion it has left from federal coronavirus stimulus relief and from the revenue from legalization of recreational marijuana.

Biotech company Moderna announced that a small study of its potential vaccine shows it’s as safe and apparently effective in older adults as in younger ones.

The company had released data on 15 younger adults, showing a 100-microgram dose appeared safe and triggered an immune response similar to people who had been infected with the coronavirus. The new data, which has not yet been published or scientifically reviewed, shows similar results among 10 adults between the ages of 56 and 70 and another 10 older than 71.

There had been some question about whether Moderna’s vaccine technology, which has never been used for an approved vaccine, would be as effective in older people, who are far more vulnerable to serious cases of COVID-19.

The company is pursuing larger trials to examine safety and effectiveness of its candidate vaccine, now called mRNA-1273. In a Phase 2 trial, the company has tested 300 younger adults and 250 over age 50. It has not released those results.  Moderna has also begun a Phase 3 trial, intending to give 15,000 people mRNA-1273 and another 15,000 a placebo.

‘This change in policy will kill’: Experts troubled by CDC changes to COVID-19 testing guidelines

Infectious disease experts are not only confused, but also troubled, by the recent change in testing guidelines made by the U.S. Centers for Disease Control and Prevention which said people without symptoms “do not necessarily need a test” – even if they’ve been exposed to the coronavirus.

“Our work on the ‘silent’ spread underscored the importance of testing people who have been exposed to COVID-19 regardless of symptoms,” tweeted Alison Galvani, director for the Center for Infectious Disease Modeling and Analysis at Yale School of Medicine. “This change in policy will kill.”

The CDC estimates in its COVID-19 Pandemic Planning Scenarios that 40% of infections are asymptomatic and 50% of transmission occur before symptoms appear. Experts worry that failing to test asymptomatic carriers could not only result in more infections but also hinder contact tracing efforts.

“If being in close personal contact with an infected person… isn’t sufficiently important enough to get tested, I don’t see that there’s any value in contact tracing,” said Peter Pitts, president of the Center for Medicine in the Public Interest.

Before changes were made Monday, the CDC website previously said that testing was recommended “for all close contacts of persons with SARS-CoV-2 infection.”

Two patients in Europe have been reinfected with COVID-19, further emphasizing the necessity of a vaccine as opposed to relying on herd immunity.

Both cases – one in the Netherlands, the other in Belgium – were reported by state broadcasters and were proven to be different strains of the virus, reported Reuters. The Dutch woman, Dutch virologist Marion Koopmans told broadcasters, had a weakened immune system.

“That someone would pop up with a reinfection, it doesn’t make me nervous,” Koopmans said, per Reuters. “We have to see whether it happens often.”

The news comes only days after researchers at the University of Hong Kong announced that a 33-year-old man was re-infected by a different strain of COVID-19 more than four months after his initial infection.

University of Alabama cases skyrocket to over 500 in one week

After one week of in-person instruction, the University of Alabama has amassed 531 cases, putting the upcoming fall semester “in serious jeopardy,” according to Tuscaloosa Mayor Walt Maddox.

“As mayor, my first responsibility is to protect the health, safety and welfare of this community and of every person that is living here, studying here or working here.”

In order to curb cases in the area, Maddox ordered the shutdown of bars — both standalone and in restaurants — that went into effect Monday. The university is also limiting students’ activities on campus to address on-campus hot spots.

New genetic data helps tell the story of how COVID-19 arrived in Massachusetts, exploded across a hotel conference center, wormed its way into a nursing home, repeatedly struck a homeless shelter, and contributed to the virus’ march around the globe.

Although parts of the story have already been told and others remain elusive, genetic data from many of the COVID-19 infections in the Boston area in March and April helps fill some gaps.

The new research also tracks several “superspreading events” that may help public officials decide which activities are safe and which are dangerous, said Dr. Jacob Lemieux, who helped lead the study, which was posted online Tuesday but has not yet undergone scientific peer review.

One of the “superspreading” events took place in late February at a conference of the biotech company Biogen, which specializes in treating neurological diseases.

After the Food and Drug Administration offered shaky data to justify its approval of blood plasma to treat COVID-19, some scientists are worried the agency could bow to pressure to approve a coronavirus vaccine before it’s fully tested.

Sunday, President Donald Trump announced the FDA had issued an Emergency Use Authorization for blood plasma. The president, the Health and Human Services Secretary and the head of the FDA all said the treatment reduced deaths in COVID-19 patients by 35%.

It did not, and scientists immediately questioned FDA’s claims about the data.

“You saw FDA be bullied by the president of the United States into approving something that they didn’t want to approve earlier, because he wanted them to do that,” said Dr. Paul Offit, director of the Vaccine Education Center at Children’s Hospital in Philadelphia, in an online interview Monday with the editor of the Journal of the American Medical Association.

Hawaii’s most populous island is returning to a stay-at-home order while officials strive to conduct 70,000 COVID-19 tests in two weeks amid a surge in cases. Oahu, where Honolulu is located, has seen daily triple-digit positive cases in recent weeks, an alarming spike after Hawaii had enjoyed the lowest infection rates in the nation per capita earlier in the pandemic.

With help from the federal government, Oahu officials will conduct mass testing across the island with the goal of testing 5,000 people daily for two weeks, Honolulu Mayor Kirk Caldwell announced Tuesday.

The tests will be free and no symptoms, health insurance or doctor referral will be needed, Honolulu Fire Chief Manuel Neves said.

Starting Thursday, Oahu will be under a stay-at-home order with gyms and dine-in restaurants to be closed. Religious services will be allowed to continue. So-called essential businesses such as grocery stores, banks and childcare facilities can remain open. Most schools have been providing online instruction.

The nation’s county with the highest number of COVID-19 infections is seeing a decline in confirmed cases. The Los Angeles County Public Health Department confirmed 989 new infections Tuesday, marking the first time it has reported less than 1,000 daily cases since the beginning of June.

The number of daily confirmed cases from mid to late July was about 3,200, officials said. However, Los Angeles County remains on California’s coronavirus watchlist.

“Last week, we mentioned that we were showing progress on meeting the state’s benchmarks for getting off the watchlist, and we are grateful for everyone’s sacrifices that have resulted in slowing the spread,” the county’s public health director Barbara Ferrer said in a statement.

“Because of the lessons we learned from our explosion of cases in July, I need to ask that we continue to significantly modify our actions if we want to keep community transmission rates low,” Ferrer said.

California has the most COVID-19 cases of any state with 673,095 infections, according to the state’s department of public health.

Montana officials said Tuesday they have suspended the transfer of state inmates out of three county jails because of COVID-19 outbreaks that have infected more than 90 inmates and staff.

Wed Aug 26 , 2020
With retail trading on an upswing, younger investors are at risk of getting “addicted” to online trading, NYU Stern business school professor and entrepreneur Scott Galloway told Yahoo Finance, as he urged investing apps to do more to contain the fallout. Galloway pointed to the tragic story of a young […] 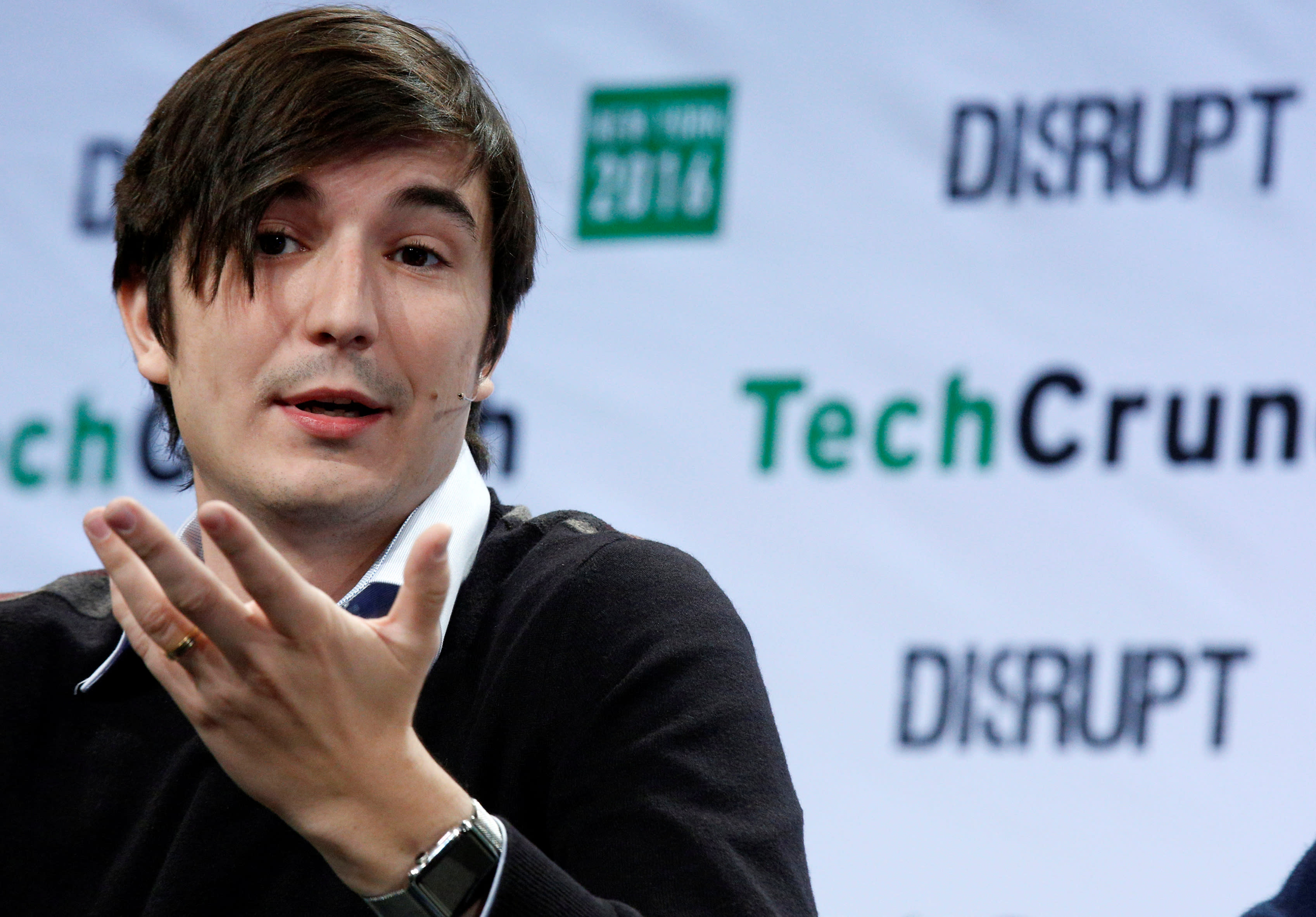