MILAN – Consumers in China, the online channel and the younger generations are expected to be the main growth drivers of personal luxury goods, forecast to reach sales of between 330 billion and 370 billion euros in 2025, with a compound annual growth rate of about 10 percent. For the […]

MILAN – Consumers in China, the online channel and the younger generations are expected to be the main growth drivers of personal luxury goods, forecast to reach sales of between 330 billion and 370 billion euros in 2025, with a compound annual growth rate of about 10 percent.

For the time being, however, the industry is reeling from the coronavirus pandemic, and sales in 2020 are seen falling 23 percent to 217 billion euros.

According to the 19th edition of the Bain & Company Luxury Study, released on Wednesday in Milan in collaboration with Italy’s luxury goods association Fondazione Altagamma, this is the first contraction of the sector since 2009 and the largest since Bain and Altagamma began tracking the industry. Their Worldwide Luxury Market Monitor sees the luxury industry on a path to recovery by 2022-2023.

The overall luxury market, comprising both luxury goods and experiences, ranging from luxury cars and fine wines to gourmet food and private jets, contracted at a similar pace and is now estimated standing at approximately 1 trillion euros, down 20 to 22 percent compared with 2019.

Bain & Company partner and co-author of the study Federica Levato said in a phone interview that luxury brands are showing resilience in the face of the challenges. “We believe that the industry will come out of the crisis with more purpose and more dynamism than ever before,” she said.

However, the industry will be drastically transformed by 2030, she continued, and luxury companies “will need to think boldly to rewrite the rules of the game.”

Levato contended that “we will not talk about luxury industry anymore, but of the market for insurgent cultural and creative excellence. In this new enlarged space, the winning brands will be those that build on their existing excellence while reimagining the future with an insurgent mindset.”

The pandemic accelerated several dynamics including that of online shopping for luxury goods, which doubled its share of the market to 23 percent in 2020 from 12 percent in 2019. In the luxury market, online sales totaled 49 billion euros in 2020, up from 33 billion euros last year.

Online is set to become the leading channel for luxury purchases by 2025, fueling the omnichannel transformation.

“Online shopping is now ingrained for the long-term, there is no coming back, and the lockdowns brought online alphabetization. This trend will not decelerate and the growth is expected to continue up to 2025, when online is seen reaching one third of total market value,” said Levato.

She underscored that stores will not lose their role, but this will change as brands rethink different touch points. “Physical interaction and the relationship with people remain very important. The selling surface will be repurposed for a different experience, more inspiring and stores will be redistributed in different cities. One size does not fit all.”

In 2020, brick and mortar was down 21 percent in retail and 40 percent in wholesale. Within wholesale, the contraction in perimeter, the polarization in performance and the fiercer competition will lead luxury brands to increase control over the channel.

“We have all experienced a difficult year of rapid, unexpected changes and luxury has not emerged unscathed,” said Claudia D’Arpizio, a Bain & Company partner and lead author of the study. “While the industry has suffered from a pause in global travel and ongoing lockdowns, we believe it has the necessary resilience to manage through the crisis. We have faith in its ability to transform its operations and redefine its purpose to meet new customer demands and retain its relevance, especially for younger generations.”

To be sure, Gen Y and Gen Z are set to drive 180 percent of the growth in the market from 2019 to 2025. They place an unprecedented emphasis on tackling social and racial injustice and they seek brands that align with their vision. Luxury brands are expected to demonstrate real and sustained commitment to diversity, inclusion and sustainability.

Uncertainties still loom ahead, but while the second quarter was the worst the sector has ever experienced, there were signs of recovery in the third quarter. The study expects a 10 percent decrease year-over-year in the fourth quarter. Levato underscored that this is obviously highly dependent on the future evolution of the pandemic, the speed of return to travel globally, the resilience and confidence of local customers and the additional restrictions that national governments could put in place. Depending on these macroeconomic conditions, for 2021, Bain forecasts growth that ranges from 10 or 12 percent to 17 or 19 percent.

The decline in revenue is taking a disproportionate toll on profitability. Bain expects operating profit to decline by 60 percent in 2020 compared with 2019. This reflects an average of 21 percent margin slipping to 12 percent. According to the study, in 2021 the market is expected to recover 50 percent of the profit loss of 2020 – still below 2019 levels.

Mainland China has been the only region globally to end 2020 on a positive note, growing by 45 percent to reach 44 billion euros, boosted by local spending across all channels, categories, generations and price points.

The year is propelling China to become the biggest market by 2025, when Chinese consumers will make up close to 50 percent of luxury purchases globally.

Europe was deeply affected by the collapse of tourism. While local consumption remains, regional consumption fell by 36 percent to 57 billion euros. Russia stood out as the best performing area.

Sales in the Americas fell 27 percent to 62 billion euros. Levato said that in the U.S. there is a “macro tendency towards wealth ruralisation, and wealthy individuals moving to their second houses from the main cities,” citing the shift from Manhattan to Connecticut, for example. “There is a new updated map, where other cities emerged as champions. The question is will they remain relevant in the future?” This move is not limited to the Americas, as it is a trend seen in other markets, too, Levato noted.

Sales in Japan shrunk by 24 percent to 18 billion euros in 2020 and brands seen as long-term investments and timeless have shown more resilience.

The rest of Asia also struggled, with Hong Kong and Macau among the worst performers globally, said Levato, citing a “structural crisis” existing even before the pandemic, and the lack of tourists. The region contracted by 35 percent to 27 billion euros.

South Korea is showing a sound performance despite a slumping duty-free market.

Sales in the rest of the world were down 21 percent to 9 billion euros. Australia was dented by wildfires and, in the Middle East, the lockdowns were shorter and local spending helped boost sales.

The study shows that because of the travel restrictions, the share of local purchases reached 80-85 percent this year and going forward they are expected to represent between 65-70 percent.

Shoes were cushioned by demand for sneakers, falling by 12 percent to 19 billion euros while jewelry decreased 15 percent to 18 billion euros, thanks to sustained growth in the Asia-Pacific region, mainly China, and an acceleration online. That category remains polarized with high jewelry and iconic entry-priced items leading the recovery.

Beauty was down 20 percent to 48 billion euros, affected by the shutdown of dedicated physical distribution and travel retail. Cosmetics over-performed compared with fragrances.

Watches and apparel both declined by 30 percent to 27 billion and 45 billion euros, respectively. Formalwear demand was in sharp decline and apparel players faced increasing competition from social-media-savvy, direct-to-consumer brands.

Across product categories, entry-price items increased their relevance, reaching more than 50 percent of volumes sold in 2020.

The current crisis accelerated the shift in the brand’s role, from producers to broadcasters.

“Brands will need to adjust their footprints to the new map of luxury buying, evolve the store role and its ergonomics, and maximize the customer experience,” the study points out. “The wave of transformation will not leave the wholesale distribution untouched: perimeter contraction, polarized performance and entry of new players will lead luxury brands to increase their control on the channel.”

Wed Nov 18 , 2020
PARIS (Reuters) – Online retail giant Amazon, which has been operating during the French lockdown, has seen a boost in activity in the range of 40%-50%, the head of Amazon France said on Wednesday. France entered a second national lockdown on Oct. 30 and it is set to last at […] 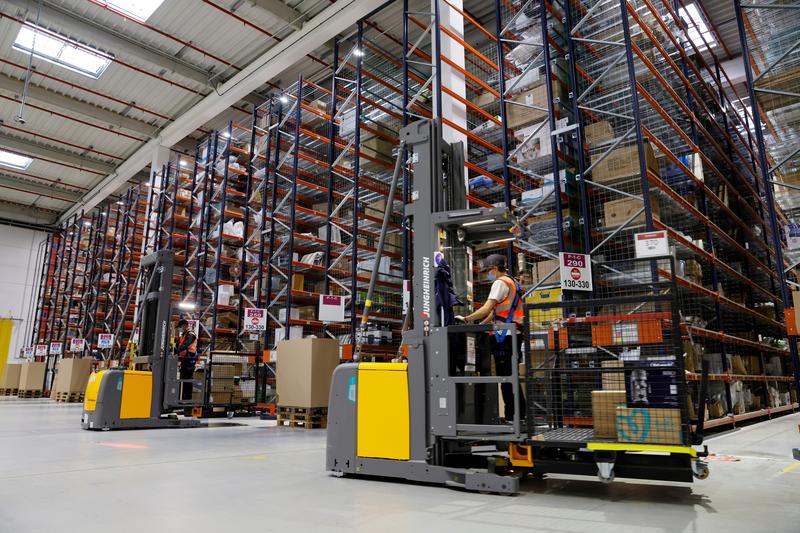