Colorado will allow voters to track the status of their mail-in ballots online, joining a growing list of states to offer the amenity.

Voters will be able to receive notifications by phone, email or text about the status of their mail ballots, from the moment their county clerk and recorder mails the outgoing ballot packet to when their ballot is received and accepted for counting, Secretary of State Jena Griswold announced Monday.

Colorado conducts all elections by mail. Voters will be notified they have been enrolled in the ballot-tracking service if their registration record contains an email address.

Most states now offer some form of mail-in ballot tracking, although services vary, according to data compiled by NBC News.

Elections officials say voters should use these tracking services instead of going to the polls on Election Day to check if their ballot has been received, as Trump has repeatedly urged his supporters to do. — Tripp Baltz

Biden’s campaign has become more diverse as it’s hired more staff in recent weeks, with nearly half of its employees identifying as people of color.

The Democratic nominee’s full-time staff is 46% people of color, up from 35% when the campaign last disclosed data in June. The campaign remains majority female, with 59% of staff saying they’re women, up from 53% 11 weeks ago.

The campaign’s senior staff is nearly as diverse, with 40% identifying as people of color, up from 36% in June. Senior staff is 56% female.

The Trump campaign did not immediately respond to a request for comment. In June, the Trump campaign responded to Biden’s release of demographic data with limited information, including that a majority of its staff was female and that 25% of its senior staff were people of color. — Jennifer Epstein

Trump’s former chief economic adviser, Gary Cohn, says he isn’t sure if he’ll vote for him in November.

In an interview with CNBC Monday, the former director of the National Economic Council said that he hasn’t decided between Trump and Biden.

“You know, I honestly haven’t made up my mind. I’m really eager to see an economic debate between the two of them,” he said. “I actually vote on issues.”

The former president of Goldman Sachs Group Inc., Cohn was a rare Democrat on Trump’s Cabinet. He has criticized Trump’s response to the white nationalist rally in Charlottesville, Virginia, in 2017 and later resigned over the president’s tariff policies.

Pressed for specifics, Cohn said he would be looking at the candidates’ proposals for economic stimulus, saying that small businesses need more support right now.

Nearly two-thirds of Americans are concerned about maintaining law and order in the U.S., but Biden holds a narrow edge in a new poll on which candidate would be better.

In a Monmouth University poll released Monday, 65% of Americans say maintaining law and order is a major problem, 25% say it is a minor problem and 8% say it is not a problem. Between the two presidential candidates, 52% said Biden can maintain law and order if elected, while 48% said Trump, just outside the poll’s margin of error.

Other polls have showed similar narrow leads for Biden on the issue, which Trump has attempted to make his signature, arguing in a text message to supporters that Biden would “let ANTIFA run wild” and “they’ll attack your homes” and often tweeting simply the words “law and order.”

But Monmouth University Polling Institute director Patrick Murray cautioned that most polls on the issue are recent.“It’s not clear whether Trump’s law and order message has moved the needle at all because we don’t have trends on this question,” he said.

The survey of 867 adults across the country was conducted Sept. 3-8. It has a margin of error of 3.3 percentage points.

Biden Will Chat With Wall Street’s Chanos and Wolf to Raise Money (12:48 p.m.)

Biden is raising money with some friends in finance and business on Sept. 22, according to an invitation sent out by Robert Wolf, a former UBS Group AG executive who founded the firm 32 Advisors LLC.

The event will bring Biden together with executives including the famed short-seller Jim Chanos and Norm Alpert, who runs the health care group at the private equity firm Vestar Capital Partners. They will discuss “the pandemic, the economy, climate change, gun violence prevention and other critical issues.”

Wall Street’s Democratic insiders have said they have plenty of sway in Biden’s orbit, even as he’s wooed the progressive left, and some began months ago to think about the spots they might land in Washington if he wins.

Attendees can be listed as co-chairs in exchange for a $100,000 donation, according to an invitation paid for by the Biden Victory Fund, a joint fundraising committee. Wolf, Chanos and Alpert didn’t immediately respond to requests for comment. — Max Abelson

Joe and Jill Biden cast their ballots in person Monday in the final hours of early voting for Delaware’s primary Tuesday.

In keeping with his campaign’s emphasis on voting early, the Bidens made an appointment at the county Board of Elections Tuesday morning, an option available to any Delaware voter.

Early voting ends at noon in Delaware, where the Democratic primary features races for governor and senator, including Biden’s close friend, Senator Chris Coons, who faces a long-shot challenger from the left.

“I like Coons the best,” Biden said after voting. “He’s a great, great senator.”

Both candidates have tried alternatives to Election Day voting this year, traditionally a staple of campaign photo ops. Trump voted by mail in Florida’s Republican primary in mid August, but he said last week that he may vote in person in November. — Tyler Pager

Biden called Trump’s approach to containing Iran’s nuclear program and curbing its aggression a “dangerous failure” in an op-ed.

In a guest commentary published Sunday on CNN, the Democratic nominee argued that Trump’s go-it-alone strategy to pressure Iran has left the U.S. without foreign allies to help. He cited a United Nation’s report that Iran has 10 times as much enriched uranium as it did in 2017.

“The bottom line is that Iran is closer to a nuclear bomb today than it was when Donald Trump took office,” he wrote. “And Trump has no answer for that.”

Biden said that as president he would use the Iran nuclear deal that Trump abandoned as a starting point for new negotiations, end Trump’s travel ban and ensure sanctions do not hurt the country’s fight against the coronavirus. He said he would also push back against the country’s human rights abuses.

“If Iran chooses confrontation, I am prepared to defend our vital interests and our troops,” he wrote. “But, I am ready to walk the path of diplomacy if Iran takes steps to show it is ready too.”

The article comes as the U.S. argues that international sanctions on Tehran should “snap back” on Sept. 20, effectively killing the 2015 nuclear deal Trump pulled out of two years ago. But the U.S. is largely alone in that position, with allies and rivals on the UN’s Security Council saying America’s withdrawal from the accord means it can’t dictate the accord’s future.

Early Voting Delayed in Pennsylvania Due to Court Fights

Early voting in Pennsylvania, which would normally begin Monday, is on hold as a court fight has kept the ballot itself in question.

The battleground state allows counties to begin offering absentee ballots to voters who come into their local elections office 50 days before the election.

But a lawsuit by the state Democratic Party seeking to keep the Green Party off the ballot has delayed certification.

It’s unclear when early voting could begin, since even after the ballot is certified elections officials would have to take other steps to get ready. That could be an even bigger issue this year, since interest in absentee voting has surged in Pennsylvania.

The Biden campaign is borrowing a neologism coined by former Connecticut Senator Joe Lieberman in his failed run for the White House.

In Facebook ads over the weekend, the Biden campaign argued that its record fundraising in August was a sign of “Joementum,” asking supporters to donate again in September.

“Keep up the Joe-mentum,” the ad says.

The term “Joementum” was first coined by Lieberman in 2004, as he claimed that a short rise in the polls showed he would do well in the New Hampshire primary. The next day, he finished fifth, and he dropped out a week later, and the term has been invoked for years as a marker of false confidence in a candidate.

That hasn’t stopped the Biden campaign, which previously used it in a Twitter video in March viewed more than a million times.

Trump will visit McClellan Park, California, for a briefing on the state’s wildfires.

On Tuesday, Biden will travel to Florida.

Mon Sep 14 , 2020
With the fall streaming season officially on, Netflix launched a wave of fresh content over the weekend, including TV shows like The Duchess and Julie and the Phantoms and the buzzy feature documentary, The Social Dilemma. But the most talked-about title on the streaming service remains Cuties, the French coming-of-age […] 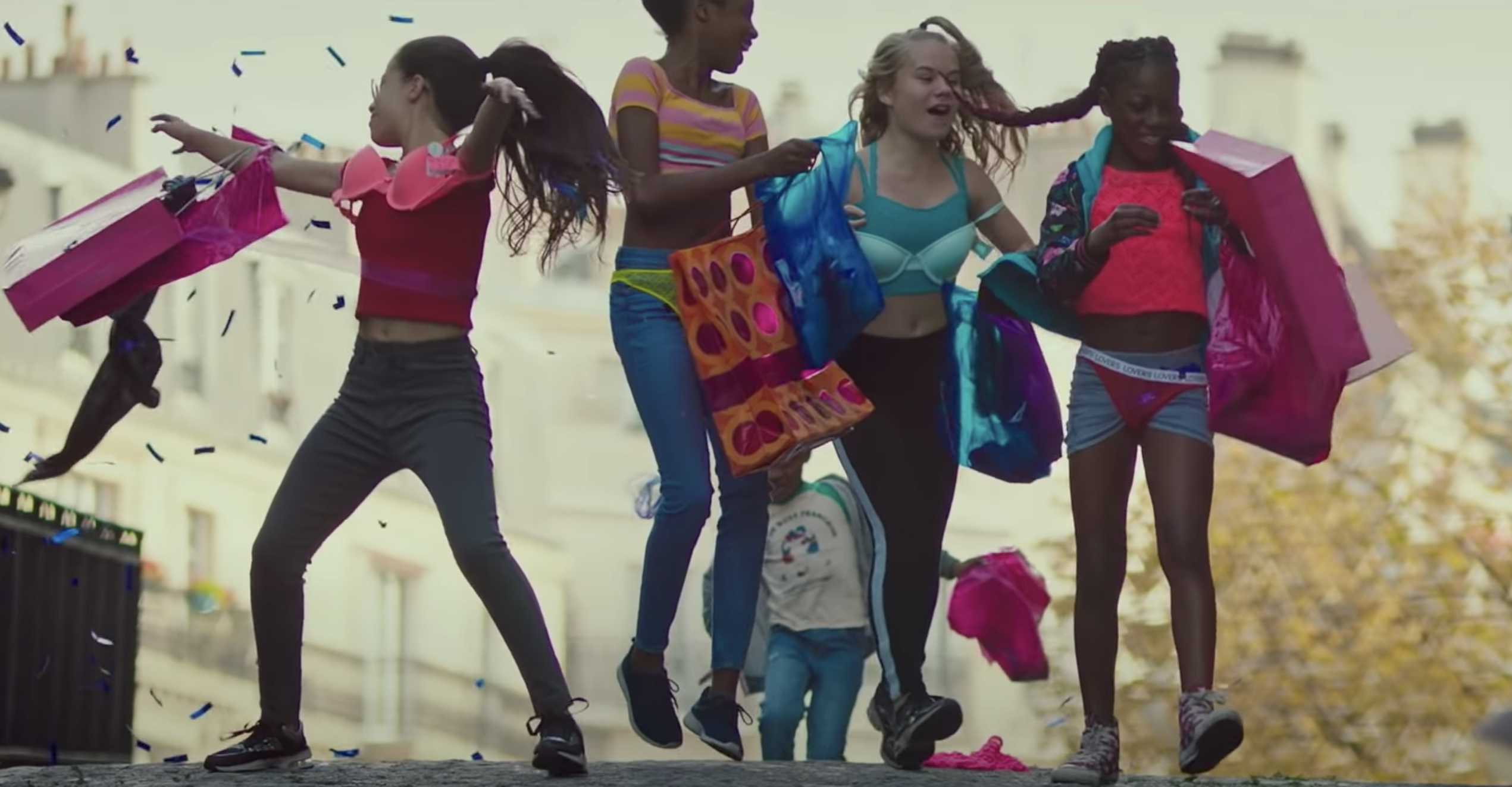