Last fall, when Breanna Brown wanted to talk to her fellow students about voting, the then-freshman at Wayne State University would walk into a lecture hall (with the professor’s permission) and extol the virtues of civic participation before class started.  In between classes, she and other organizers would “table” in […]

Last fall, when Breanna Brown wanted to talk to her fellow students about voting, the then-freshman at Wayne State University would walk into a lecture hall (with the professor’s permission) and extol the virtues of civic participation before class started.

In between classes, she and other organizers would “table” in highly trafficked areas, and guide students as they filled out a voter registration form on a friend’s computer. “We would have everybody touching that laptop,” Brown said. “That’s nothing you would ever imagine now.”

Like most things during the pandemic era, the candidate forums, residence hall canvassing and other typical election season activity on college campuses has gone digital. As such, Brown, who works as a fellow for Rise, an advocacy organization focused on college affordability and other youth and student issues, has shifted her strategy from last year.

Now, she connects the interns she manages with resident advisors or other influencers on campus, to try and convince them to talk about voting with their networks. In between Zoom classes, the students Brown works with will send Instagram or Twitter direct messages to almost 50 people on some days hoping to discuss their voting plans — and maybe get a handful of responses.

“It’s a lot more work,” Brown said of pandemic-era organizing. “It’s harder to have those conversations,” when you’re connecting digitally, “and really get to the meat of the subject with them, you just have to kind of put it out there and hope for the best.”

Rise is working with more than 500 students such as Brown in Michigan, Pennsylvania, Georgia, Wisconsin and California to increase voter turnout among college students. Since the organization launched in 2017, its approach has always been to urge students to use the power of their relationships with friends, family and others to cut through the avalanche of messaging they receive around voting, said Max Lubin, the chief executive officer of Rise.

With fewer in-person opportunities to have these conversations, students are turning to text message chains, social media and other digital formats, he said. So far, Rise organizers have had conversations about voting with 80,000 young people and the organization’s voter registration and education platform, Rise.vote, has had 166,000 visits, Lubin said.

Increasing voter turnout among college students has been a key component of their strategy of building youth political power to make college more affordable, advocate for students struggling to afford basic needs, and other policy priorities. “We no longer live in a society in which elected officials are always inclined to do the right thing by constituents; they’re really motivated by the voters that elect them,” Lubin said.

Young people are a coveted demographic

Young people are a coveted demographic among candidates, said Hahrie Han, a political science professor at Johns Hopkins University. For one, they account for a sizable portion of the electorate — one in 10 eligible voters this election season is from Generation Z, according to the Pew Research Center. In addition, habits that start when voters are young have the potential to set a precedent for the rest of their voting life, she said.

Finally, because our politics are so polarized, elections are largely won on turnout, Han said. That typically involves two components: Turning out your base and bringing in new voters. “They don’t have this voting history to draw on so everyone is fighting for that vote,” Han said of young people.

Though not all young people go to college, college campuses have historically played a role in creating a culture around voting and participating in civic life, she said. Some of those activities, like hosting a physical polling place, may be different this year, but many can still carry on in a remote format, Han added.

Perhaps counterintuitively, the pandemic constraints have allowed the College Republicans to draw more students to events that aren’t at their college or in their region, said Courtney Britt, the organization’s southern regional vice chair.

Students “are able to attend a national online conversation much more readily,” Britt said. Some of the issues the group is emphasizing as part of their get out the vote efforts include the Supreme Court nomination of Amy Coney Barret and the economy. “It’s a big deal. They need to have a strong economy to walk into,” Britt said of college students.

In addition to holding events and town halls on Zoom
ZM,

— “it’s pretty much the default at this point,” Britt quipped — the organization launched a national effort to recruit student volunteers for phone banking, canvassing (when appropriate) and other activities for close campaigns, even if they live elsewhere.

One of the biggest changes from previous years is an increased emphasis on voter education, Britt said. “This year it’s been a lot more focused on making sure people know how to vote early, how to vote by mail, making sure that they have the information and they have the resources they need — and making sure the ballots are going to the right places if they’re voting by mail.”

The Students Learn Students Vote Coalition — a group of nonpartisan organizations, colleges, universities and higher education associations working to increase college voter turnout — has also pivoted its efforts this year. The coalition formed in February 2016 initially to advocate that the U.S. Department of Education do more to make colleges aware of their responsibility to help students register to vote. The Higher Education Act requires colleges and universities to make a good faith effort to distribute voter registration forms to students in years when there’s a federal election or governor’s election in their state.

Initially, the group had planned to help colleges integrate one-on-one conversations about voting into typical touch points on campus, like registering for classes and orientation, said Clarissa Unger, the organization’s director. But once colleges began sending students home in the spring, the coalition, which was working with colleges on primary campaigns, had to switch gears, Unger said.

Now the organization is helping colleges integrate voter education into learning management systems, the websites where students attend classes and turn in homework. It held a virtual National Voter Education Week this month and has provided campuses with messaging they can use to convey to students the importance of voting early, Unger said.

Despite these efforts, Unger worries about the obstacles students could face that are particular both to this election cycle and their status as students. “The biggest challenge that students are facing this year is just not having certainty as to where they’re going to be on Election Day,” she said.

Students who might have had their mail-in ballots sent to their dorm room mail boxes could struggle to access them if they’re sent home due to a coronavirus outbreak. In this case, there’s little colleges could do because it’s illegal to forward election mail.

And because college life is so different from a typical year — even for students who are on campus — much of the social incentives around voting are gone. When in-person campus activities were robust, students would “go over to the voting locations with the a capella group,” or other student organizations, “they can’t do that right now,” said Nancy Thomas, the director of the Institute for Democracy and Higher Education at Tufts University.

On top of those challenges are the hurdles college students typically face to voting — some states won’t accept student IDs as proof of identity and/or residency, others ban voters from using an out-of-state ID to confirm their identity — and Thomas worries college student turnout could be depressed from previous years.

The average student voting rate in the 2018 midterm elections was 40%, according to Thomas’ organization, a much higher level than in previous midterm election cycles. That high level of participation was the result of a combination of several factors, according to Thomas, that included, for some, an interest in registering their displeasure with the policies of the Trump administration. Before the pandemic, she assumed college students would continue to turn out at high levels.

“I was often giving talks to administrators on college campuses back in January saying ‘don’t worry about 2020, you need to worry about 2022’,” Thomas said. “Then COVID hit and that really changed the landscape.”

Though the pandemic has increased the challenges students might face voting, the last several months have also brought into stark relief many of the issues important to young people, like economic and racial equality. That dynamic could fuel students’ enthusiasm for voting this year. More than 60% of students in a recent College Reaction/Axios poll said they would “confront or otherwise express disappointment” towards someone they know who chose not to vote if they couldn’t.

Systemic racism, student debt, climate change and other issues are on the ballot

At the NAACP, student leaders at campuses across the country are holding Zoom tutorials on how to properly fill in a mail-in ballot and how to respond if you’re denied the right to vote at a polling place. They’re also hosting virtual candidate forums and Instagram
FB,

live conversations. During this programming, organizers work to convey that issues important to young people, such as student debt, climate change and police brutality are on the ballot.

“It goes far beyond the candidates, it’s about the issues at stake,” said Russell Boyd, a national field organizer for the NAACP’s youth and college division. “It’s about the movement that we build to hold candidates accountable to support Americans, to support young Black Americans specifically, around their interests and their needs.”

“There are so many of us who are actively seeing every day the importance of voting that goes beyond the president,” Boyd added.

Indeed, that’s the case for Blaine Lewis-Thompson, a senior at Cheyney University of Pennsylvania and a senior fellow at Rise. “When I look at civic engagement, I see it as our responsibility as United States citizens and I also see it as part of the experience of being part of the Black community.”

Lewis-Thompson first got involved in civic organizing in 2017, when he started as a freshman at Cheyney, a Historically Black College. There, Lewis-Thompson began to reflect on all of the micro-aggressions he’d experienced during his K-12 education in predominantly white schools.

“My decision to go to an HBCU was looked down upon by past coaches, by past teachers,” he said. That experience pushed him to ask the question: “why is a predominantly Black space being looked down upon as opposed to my other options for schools.”

Now, Lewis-Thompson is managing a team of fellows and interns who are encouraging students to make a voting plan. “Things need to change and the greatest time to change them is now,” he said.

For Aaeshah Siddiqui, the possibility of free or affordable higher education is a major part of what motivated her to get involved with Rise and its voter registration efforts. She works as the Michigan Deputy State Director for Rise.

“When I was applying for college in senior year, I was like, ‘Oh my God what are the prices? This is too much, this is absolutely inaccessible for a lot of people,’” Siddiqui said, noting that her decision to attend Oakland University in Rochester, Michigan, was based in large part on that it was the most affordable option.

By registering students and young people to vote and helping them to develop a voting plan, Rise organizers can hold politicians accountable to their interests, like making college more affordable, she said.

“Voting is the first step,” she said.

A Window into Midland’s Past: New Reardon Store better than one destroyed by fire 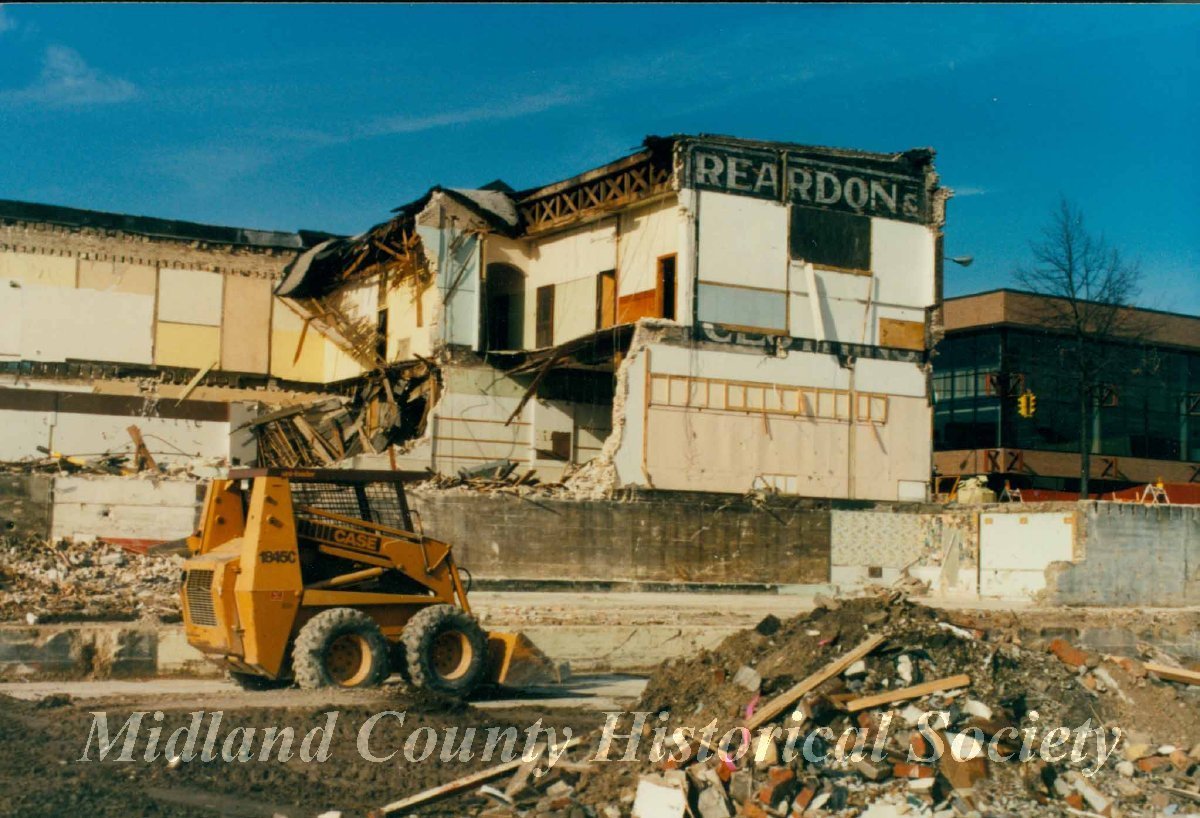