Colleges that are reopening campuses this fall know they’re bringing a higher risk of coronavirus to their community. The questions aren’t really about if or when, but about how bad outbreaks could be — and whether having an in-person experience for students is worth the cost. With so much at […]

Colleges that are reopening campuses this fall know they’re bringing a higher risk of coronavirus to their community.

The questions aren’t really about if or when, but about how bad outbreaks could be — and whether having an in-person experience for students is worth the cost. With so much at stake, some students, parents and faculty are asking: Why take the risk at all?

In many cases, it comes back to money.

For months, colleges and experts have warned another semester of remote courses could have disastrous effects on student enrollment and college budgets.

Colleges already lost billions of dollars when they pivoted to digital instruction in the spring, in the form of refunded room-and-board payments and expensive technology for online courses. Another semester — or year — of online courses could be even worse, especially for universities without large endowments.

For any institution, online instruction also means no money from dorm rooms, dining halls or campus bookstores. Athletic proceeds have also dried up as the NCAA has canceled championship competitions for the fall and conferences have canceled fall seasons. And that doesn’t even account for students ditching class altogether.

A survey by SimpsonScarborough, a higher education research firm, in July found roughly 40% of incoming first-year college students said they were likely or highly likely to change where they attended school because of the COVID-19 outbreak. And returning college students, who complained of paying full tuition for lackluster classes in the spring, have weighed deferring future enrollment until campuses reopen.

In response, some colleges have offered discounts on tuition or waived students’ fees tied to in-person activities. Others have faced students’ ire for declining to do so.

The American Council on Education, a higher education trade group, put colleges’ losses in the spring at $46.6 billion in increased student financial aid and lost revenue. The same group, joined by other college associations, told Congress it would cost at least $73.8 billion in new costs to reopen campuses.

“The sad fact is that many colleges are racing toward a financial cliff,” said Terry Hartle, a senior vice president with ACE.

Finances are likely playing some role in a university’s decision to reopen, said Kevin McClure, a professor of higher education at the University of North Carolina Wilmington.

Even a dorm that is half-full might be better for a college’s bottom line than one that is completely empty. In some cases, he said, a college may be influenced to reopen by its board — members of which are often political appointees. (States led by conservative leaders have pushed to reopen their businesses and schools more quickly than their liberal peers.)

No matter what approach a college takes, the semester’s financial picture is unlikely to leave them “significantly richer,” McClure said. Colleges that are bringing students back to campus are doing so in a limited capacity, with fewer students and with some classes held remotely.

Small public regional colleges and less selective private universities may be facing mergers or closures. Even larger universities may have to contend with furloughs, layoffs or other painful budget cuts.

“Even as a scholar and someone who believes that going online is the right decision,” McClure said, “I know that in many cases, shifting to online means that institutions are going to be in a very tough spot financially. And that will mean jobs are on the line.”

Prepare for plans to change

Hundreds of colleges are pushing ahead with in-person classes, banking on tens of thousands of COVID-19 tests, plexiglass in classrooms, university-branded face masks, and the collective goodwill of students to comply with party bans to prevent massive outbreaks. Administrators at these institutions say their students are hungry for in-person instruction, even at a reduced capacity.

Already, colleges have reported cases of COVID-19. The University of North Carolina at Chapel Hill has seen several outbreaks since starting classes last week. Other campuses over the summer saw outbreaks tied to Greek houses or at bars popular among college students.

The University of Notre Dame in Indiana brought its students back to campus last week. The campus already has a few dozen cases, despite a massive pre-move-in testing campaign, but the university’s provost, Marie Lynn Miranda, said the response has been heartening.

“Our students are so happy to be back,” Miranda said. “The extent to which they value that in-person educational experience is apparent. And it’s apparent with our faculty too.”

Some faculty at Notre Dame had petitioned the university to allow professors to decide if they wanted to teach in person or remotely. The university has made accommodations, a spokesperson said.

Whatever plan a college chooses, it may not last, said Chris Marsicano, a professor at Davidson College who leads The College Crisis Initiative, a project tracking college responses to coronavirus. Many schools had planned to reopen in the fall, but have since walked back those plans.

Students should get used to the uncertainty, he said.

Colleges likely will have to change their plans again during the middle of the semester. That may mean the easing of some restrictions, such as limits on social gatherings, but it could mean more digital instruction. He said colleges will try to avoid reconvening all their students to mix whatever they may be carrying only to send them back out across the country.

“They need to be ready to have online classes from their dorm room and all their meals delivered in boxes,” he said. “That’s sort of the worst-case scenario, but once you get on campus, most schools are not going to shut it all down.”

If people die, ‘I don’t know how that helps you’

Another cost has pushed some universities to make the opposite decision: the fear that reopening campus will cost a faculty member, staffer or student their life.

For Michael Sorrell, president of Paul Quinn College, a historically Black university in Texas, the decision to skip in-person classes in favor of an online one, “wasn’t that hard of a decision.” Paul Quinn made the call back in July. Sorrell, who previously worked in crisis management, said preventing coronavirus from spreading while offering face-to-face learning would require heavy policing of students’ behavior, especially off-campus.

He thought that was unrealistic, and he didn’t want to subject his students to heavy monitoring. He is also aware tough times are ahead. Paul Quinn planned for lower enrollment figures, and the university also reduced tuition for the fall semester. He said he understands for some universities the coronavirus is an existential threat financially, though he wonders about the long-term consequences.

“I don’t know how your students and staff look at you the same once they figured out that you didn’t put their safety at the top of your decision making,” he said. “If a bunch of students get sick, and a bunch of your staff dies, I don’t know how that helps you fight a fight another day.”

The calculus was similar for Suzanne Elise Walsh, the president of Bennett College, an all-women historically Black college. The college, like most small, private institutions, relies heavily on tuition money to function. It’s also in the middle of updating its accreditation, which also takes a lot of time and money.

But Walsh said she also had to consider how the virus is disproportionately affecting people of color. The decision was primarily focused on the health of the community, she said.

“The primary motivator for insisting that classes take place in person is financial,” said Desirae Embree, a graduate student at Texas A&M University.

“Would a long-term budget crunch hurt a lot of us? Yes,” she said. “But also the more immediate danger is our short-term and long-term health if we do get this virus.”

Even before students arrived on campus, Notre Dame had mailed thousands of them coronavirus tests to take at home. Of the nearly 12,000 who took tests, less than 1%, or about 33 students, tested positive for the virus.

Classes began last Monday at the Indiana campus, and as of Friday, there had been 44 confirmed cases since move-in started August 3. University protocol calls for people infected with coronavirus to isolate.

Miranda, the provost, said the university believes the in-person experience was necessary for its students’ education. Switching to digital instruction in the spring, she said, “was not a particularly good experience for our low-income and low-resource students.” They may lack internet and a safe home environment for studying.

In-person instruction also provides more cover for international students, she said, whose ability to study in the country has been threatened by proposed rule changes by President Donald Trump’s administration.

Miranda said she is aware of the criticism that financial concerns may be driving the university’s actions.

That desire to continue Notre Dame’s educational mission fueled its reopening decision, Miranda said, though it did have financial implications.

Other universities have taken a similar stance. Boston University is pushing ahead with its plans to reopen in the fall while facing demonstrations from its community to move all classes online. In a statement, university leaders said a residential education was key to the university’s mission. It also said students were eager to return to campus and that the college already had suffered a “significant financial impact.”

“We must minimize additional negative impacts on the University’s overall operational and financial viability so that we may emerge from this period financially sound,” the university said.

Texas A&M University is also planning to start in-person instruction, along with some online courses. The university has taken some safety measures like increased cleaning or pushing for everyone to wear a mask, said Embree, the graduate student in Texas, but it feels like putting a “Band-Aid on a geyser.”

“We have no idea what’s going to happen when all the students come back,” she said.

She still has questions about details such as what kind of filtration system would be used in the classrooms. And it’s unclear to her, she said, what the university plans to do to help graduate students who fall behind in their studies or need emergency financial aid, or how it plans to enforce its social distancing orders.

A letter asking that all graduate students be able to teach online and requesting hazard pay for those who teach in person had been endorsed by nearly 500 graduate students as of Friday. The university said last week leaders were confident they were “doing everything we can to provide the best education as safely as possible.”

Embree worries cases will shoot up when students return, and local hospitals won’t be able to handle the surge. And she fears students who do come to A&M may later return to their hometowns and spread the virus there.

“People will die,” she said. “And then the university will shut down and go completely online.”

Businesses in Milwaukee seeing the impact of a mostly virtual DNC

Mon Aug 17 , 2020
The Democratic National Convention was supposed to put Milwaukee on the map and elevate the often-overlooked city on the world stage. Organizers said 50,000 people would travel to the beer-loving town, maxing out its supply of hotel rooms, pack its bars and generate $200 million in economic activity. (MORE: 2020 […] 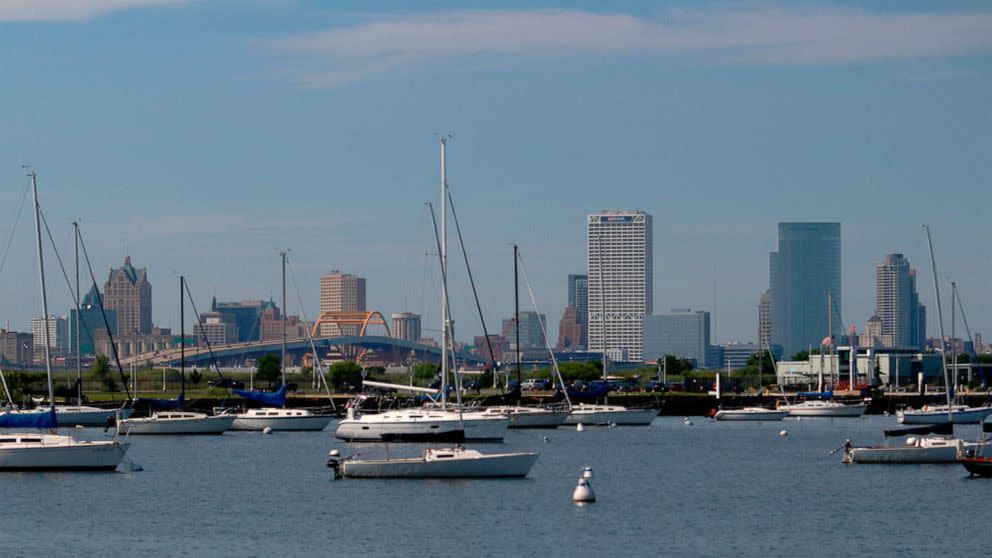