Liberty Bank has built the third-largest market share among Connecticut-based banks, but the Middletown mutual lender doesn’t plan to rest on its laurels. Liberty is setting its sights on new potential revenue streams from well beyond its current geographic footprint, and the bank has hired David Mitchell, a longtime fintech […]

Liberty Bank has built the third-largest market share among Connecticut-based banks, but the Middletown mutual lender doesn’t plan to rest on its laurels.

Liberty is setting its sights on new potential revenue streams from well beyond its current geographic footprint, and the bank has hired David Mitchell, a longtime fintech executive with a successful digital banking track record, to lead the way.

Next year, Liberty intends to launch its first-ever “digital bank” — an online-only platform, perhaps branded under an entirely different name, that targets a specific clientele in other states (think pet lovers, sports fans, or even soccer parents) with custom-tailored checking accounts, loans and other financial services.

The goal is to capture business the bank could have never chased under its traditional model of serving Connecticut residents and businesses located within its physical turf. And there may be multiple launches in the years ahead.

Local competitors will be watching, as Liberty’s new initiative puts it on the digital banking forefront, at least for traditional Connecticut-based banks.

Mitchell’s hire as chief digital officer and digital banking general manager comes at a critical time for banks of all sizes.

Online-only banks have poached millions of customers from traditional U.S. lenders in recent years, and giants like Amazon and Walmart present a similar threat as they elbow their way further into the market, offering banking, credit and other financial services to their vast customer bases.

The COVID-19 pandemic has only accelerated the trend toward digital financial services, reducing branch foot traffic and calling further into question the financial soundness of the age-old bank strategy of investing in brick-and-mortar branch networks.

“The competitive landscape has significantly changed,” said Mitchell, who started at Liberty in August. “We are in an environment with razor-thin margins, operating costs are under pressure, and because of disruptions like COVID-19, we just feel that innovation is now a prerequisite so we can quickly respond to market demands and opportunities.”

“Banks just can’t sit still in the old traditional banking model or we will just become utilities,” he added.

Mitchell likens the severity of the competitive threats to traditional banks from online and giant corporate competitors to those that either killed or significantly weakened companies like Kodak (digital cameras) and Blockbuster (video streaming services), as well as the taxi industry (Uber and Lyft).

“You just can’t be complacent because the next Uber or Netflix could be right around the corner in banking,” he said.

Big players like Bank of America, Wells Fargo and Chase are still competitors, of course, but Mitchell has urged Liberty’s leadership to focus more on upstart threats like Chime and Ally. With more than 16 million combined customers, the two are seen as the top U.S. online banks.

“And they don’t have a single branch, think about that,” Mitchell said. “They’ve started to eat away at significant market share without the cost structure.”

Mitchell’s job at Liberty is to figure out how the bank can tap into the fast-growing digital banking market, and he appears well-suited to the task since he’s helped about 10 banks around the country do something similar during his four years as president of Glastonbury-based NYMBUS, a cloud software provider to the fintech industry.

NYMBUS helped Indiana’s Centier Bank stand up an online-only savings account brand called Billinero, which offers monthly and quarterly cash prize drawings for members as an enticement to build up their savings.

In the banking world, such customer niches are known as affinity groups.

Liberty similarly plans to target specific affinity groups with its digital launches in the coming years.

Banks often pride themselves on their brand, but Liberty’s name will be less important when trying to capture business in other parts of the country, Mitchell said.

Liberty’s made no final decisions just yet on its digital banking target clientele, but it’s considering many options.

It might sound simple, but co-branded cards and custom-tailored product offerings are already big business in the financial services world. Last year, consumers made $990 billion worth of purchases with co-branded cards offered by airlines, hotel chains, and big retailers in partnership with financial institutions, up nearly 8% from 2016, according to a recent report from ResearchAndMarkets.com.

New brick-and-mortar branches are not out of play for Liberty by any means, but launching digital banks could limit how many it opens moving forward.

“Maybe instead of launching six new branches that less people are going to walk into, we launch six digital banks,” Mitchell said. “Some may do well, some won’t, just like branches.”

The idea is to get new customers from other states to open online checking and savings accounts and take out loans with Liberty, generating interest and fee revenue.

“We can go to all 50 states, we can turn the marketing spigot on or off depending on how it’s growing or not growing, and doing it without the cost structure of a branch,” Mitchell said.

Mid-sized banks in other states have launched successful digital banks through partnerships with fintech providers, and in the process a few have even transformed themselves entirely from legacy institutions into truly digital lenders, but Mitchell’s effort at Liberty is unique among Connecticut banks.

“No, it’s not that common for banks to create a separate digital brand,” said Charles Potts, senior vice president and chief innovation officer at the Independent Community Bankers Association (ICBA), a national industry group based in Atlanta, which claims to be the fintech capital of the U.S. “If there were a lot of banks doing this, it would be readily apparent.”

Not every bank is ready to take on digital banking, Mitchell contends. Banks are often handcuffed by legacy technology and systems. It’s also hard to turn a big ship — upper management must buy in.

“Regarding our competitors, this type of strategy is not for everyone especially if it is not top down part of their culture,” Mitchell said. “In my view, the culture is a major component of success.”

Liberty CEO David Glidden appears to be fully on board, saying the bank is aiming to do more than simply keep pace with digital trends.

“Our goal is to make our digital platform and product offerings key differentiators in the industry, satisfy our customers’ rapidly changing expectations while continuing to enhance our traditional banking services and position us for great success in what is now the ‘new normal’ in banking,” Glidden said.

There are, of course, risks to launching any kind of new venture.

“In essence, you’re launching a new business,” ICBA’s Potts said. “Think of all the different types of risks a new business might face.”

Potts has worked in the banking and financial technology industries for about 40 years, and has known Mitchell for at least half that time. He says it will be worth watching how Liberty’s new strategy plays out.

“He’s one of the good guys in the industry and he’s got a very good reputation,” Potts said. “He’s stepped into a really cool challenge that I think he’s equipped to take on.”

Mon Oct 19 , 2020
getty Dry. Dull. Boring. Exhausting. Painful. Waste of time. Forgettable. Those are the words and phrases that came up when I asked people this question: What word would you use to describe the Zoom Presentations/webinars you attend? And it’s true, most webinars are likely to be uninspiring … and forgotten […] 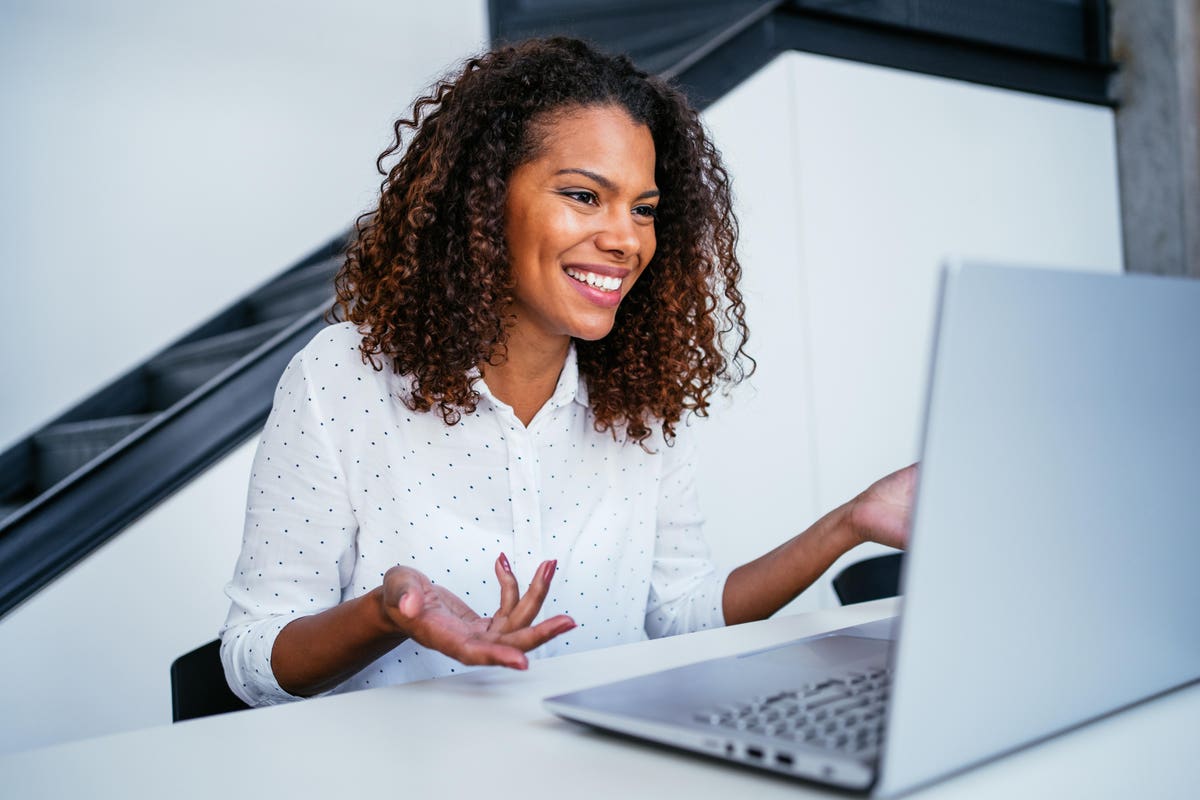