The last two weeks has been a period of contrasting emotions for Cuties filmmaker Maïmouna Doucouré. The film, her debut feature that was an award winner at Sundance earlier this year, was released in French cinemas on August 19 to positive reviews and strong word-of-mouth from the public who were […]

The last two weeks has been a period of contrasting emotions for Cuties filmmaker Maïmouna Doucouré. The film, her debut feature that was an award winner at Sundance earlier this year, was released in French cinemas on August 19 to positive reviews and strong word-of-mouth from the public who were willing to don their masks and venture out to the theater.

But then there was that Netflix poster.

Released by the streamer at the same time as the French theatrical rollout in a bid to begin promoting the movie ahead of its U.S. debut on September 9, the artwork provoked a furious online backlash from people who criticized it for sexualizing children. Netflix moved rapidly to amend the marketing blunder, quickly switching it out for new artwork more akin to the French theatrical poster [you can see the two side-by-side below] and unreservedly apologizing for what it called an “inappropriate” and “not representative” promotional effort.

Unfortunately, in the social media era, outrage spreads like wildfire online, and many people began to conflate the artwork with the film, piling in to express their distaste that a movie that ‘sexualized children’ had been bought by Netflix. Reactions varied in their extremity but some commentators, including among our readers, said they wouldn’t use the SVOD anymore in retaliation. The truth of the movie, as has been well covered by reviews and audience reactions since its buzzy Sundance and Berlinale screenings, is that it is the nuanced, sensitive tale of a pre-teen girl who gets caught between two cultures – her conservative, religious upbringing and the pull of her liberal French school friends who are influenced by the internet and social media. That reality appears to have been lost in the storm, and the truth is very few of the people reacting so strongly will have actually seen the film.

For Doucouré, who spoke to Deadline from her native France where she is supporting the theatrical roll out (which had been delayed four times from its original March date due to the pandemic), this has been a difficult and unpleasant experience. She hadn’t seen the U.S. artwork before it debuted online, so the subsequent backlash was shocking and jarring for her.

“Things happened fairly quickly because, after the delays, I was completely concentrating on the film’s release in France. I discovered the poster as the same time as the American public,” she reveals. “My reaction? It was a strange experience. I hadn’t seen the poster until after I started getting all these reactions on social media, direct messages from people, attacks on me. I didn’t understand what was going on. That was when I went and saw what the poster looked like.”

It goes without saying, but Doucouré does emphasize that she is of course against the hypersexualization of children, which she was accused of online. The torrent of abuse got so serious she actually received threats against her life, the director tells Deadline in her first interview since the incident.

“I received numerous attacks on my character from people who had not seen the film, who thought I was actually making a film that was apologetic about hypersexualiation of children,” she says. “I also received numerous death threats.”

On a more positive note, high-profile figures did weigh in to support Doucouré, including Tessa Thomspon, who tweeted twice:

Disappointed to see how it was positioned in terms of marketing. I understand the response of everybody. But it doesn’t speak to the film I saw. https://t.co/L6kmAcJFU1

The filmmaker says she was flooded with positive messages after the initial negativity. Those who had seen the film at Sundance and Berlin, she adds, “really supported her” and have helped to highlight the real message of the movie. Doucouré says she has also received “extraordinary support” from the French government, and that the film will be used as an educational tool in her home country.

Regarding how she feels about that Netflix poster [the streamer won’t be drawn on whether the artwork was made in house or by an agency, and how it managed to get through quality control], the filmmaker states it is clearly “not representative of the film and especially its message”, and while her voice is tinged with frustration, she is level-headed and emphasizes that Netflix did make a serious effort to apologize to her.

“We had several discussions back and forth after this happened. Netflix apologized publicly, and also personally to me,” she says. That apology, it turns out, took the form of a direct call from Netflix co-CEO Ted Sarandos. Doucouré won’t reveal what the pair said, but she suggests she was comforted by their chat and isn’t bearing any grudges. “Streamers are a great way to get my stories out and share my messages with more people,” she adds positively.

As evidence, the director mentions she is already writing another project for a streaming service, though she won’t specify at this point whether that is with Netflix or not, while she is simultaneously working on a film aimed at theatrical that will be set in North America and Africa.

Cuties was always supposed to be a provocative movie, and the project is a very personal one for its director.

“I really put my heart into this film. It’s actually my personal story as well as the story of many children who have to navigate between a liberal western culture and a conservative culture at home,” explains Doucouré, who is of Senegalese descent.

The movie follows Amy (a breakout turn for the brilliant Fathia Youssouf, who beat 700 other girls at auditions to secure the part), a young Senegalese Muslim girl living in France who dreams of joining her friends’ modern dance troupe, a fantasy that clashes with her family’s traditional values.

“I wrote this film after I spent a year and a half interviewing pre-adolescent girls, trying to understand their notion of what femininity was, and how social media was affecting this idea,” the director continues. “The main message of the film is that these young girls should have the time to be children, to enjoy their childhood, and have the time to choose who they want to be when they are adults. You have a choice, you can navigate between these cultures, and choose from the elements of both, to develop into your own self, despite what social media dictates in our society.”

Doucouré has mixed feelings about the influx of social media into the lives of young people.

“It affects all of us. There is a good side to it, it brings us information and beautiful images, and lets us meet more people, but there is a harmful side, where I find we have a new way of looking at love,” she comments. “Love and self-esteem are constructed through likes and followers. What happens is young girls see images of women being objectified, and the more the woman becomes an object the more followers and likes she has – they see that as a role model and try to imitate these women, but they’re not old enough to know what they’re doing.”

While the reception in France has been positive over the last two weeks, is she concerned that the negative reaction to the poster could harm the film’s U.S. release?

“I actually hope that those who haven’t seen it, will see it, and I can’t wait to see their reaction,” she asserts. “Hopefully they will understand that we’re actually on the same side of this battle. If we join forces, we could make a big change in this world that hypersexualizes children.”

Doucouré signed with CAA after her film was selected for Sundance, but does she have any reservations about working outside of her native country after this experience?

“On the contrary, I’m really excited to work in America. I’m a French director, but what’s important for me is that my stories have a universal message, whatever language they’re filmed in,” she says.

The director is also passionate about increasing diversity on screen. As a black, female filmmaker, she acknowledges the lack of past opportunities for people like her in the industry, and says that the cinema has the power to make a positive impact in the wider discussion about racial equality.

“People have a need to see people who look like them on screen. Black Panther, for example, gave young boys and girls the realization they too could become a hero. If you can be a superhero in a movie, you can also be a hero in any other profession,” she says. “Film has this power. I’m sad that in today’s world we actually need to have a Black Lives Matter movement. We’ll continue to fight until we are able to say “cut”, once we have equality in this world in all areas of society.”

Thu Sep 3 , 2020
(Bloomberg) — Anthony Fauci, the U.S.’s top infectious disease expert, named seven states most at risk of a jump in Covid-19 cases if they fail to take precautions over the Labor Day weekend. In Europe, fresh signs emerged that an economic rebound is flagging. Thailand reported its first locally transmitted […] 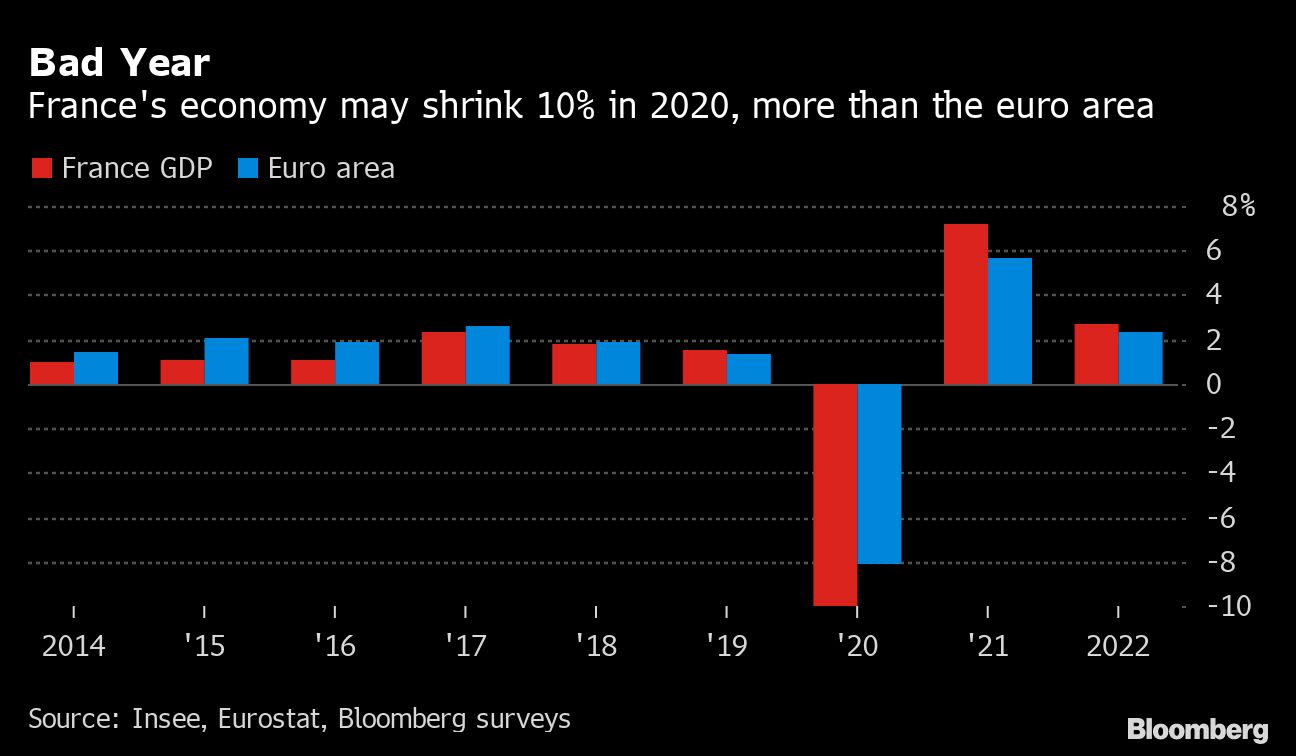