Dave Ramsey says avoid these 10 major money don’ts Talk-radio star Dave Ramsey says you can solve your money troubles just as soon as you stop causing them. The money management guru has been doling out his signature blend of tough-love financial advice and Biblical wisdom since 1992. He learned […]

Talk-radio star Dave Ramsey says you can solve your money troubles just as soon as you stop causing them.

The money management guru has been doling out his signature blend of tough-love financial advice and Biblical wisdom since 1992. He learned it all the hard way: In his 20s, Ramsey built a million-dollar fortune flipping houses but lost it all when banks started calling in his debts. He had to buckle down to build back up from bankruptcy.

Now his radio show is syndicated on more than 600 stations, and he’s the author of several books. He teaches Americans how to save more money and avoid wallowing in debt — even during the current financial crisis.

When you’re deep in debt with multiple loans, freeing yourself can seem impossible. That’s why Ramsey suggests the “debt snowball method.”

“It’s more about behavior change than numbers. Once your income is freed up, you can finally use it to make progress toward your savings goals,” Ramsey explains on his website.

The snowball method is one of Ramsey’s most common pieces of advice but it’s also controversial. If your credit score is hurting, it may be better to use an online service that can help you determine which bills to pay off first to get your score back up.

If you want to become financially independent, you’ll have to figure out where you can cut corners. That means no more lattes or new jeans.

“But I work hard all day. I deserve it. Oh, call the wahhmbulance — we all work,” Ramsey said on his radio show.

With just a bit of budgeting, most people learn they’re not nearly as strapped as they think they are. Overspending is what’s keeping Americans in debt, Ramsey says, especially the attitude that you deserve what you want.

Each shopping trip helps fritter away your future, especially if you’re not using money-saving tools including a free browser add-on that helps you find better prices online.

3. Don’t buy with a credit card what you can buy with cash

Ramsey says you don’t need fancy software to help you save. Once you’ve worked out your monthly budget, withdraw that much cash from the bank and separate it into envelopes labeled gas, groceries, entertainment and whatever else you need.

“Anytime you want to know how much money you have left to spend in your budget category, just take a peek in your envelope,” Ramsey said in a blog post.

It may sound old school, but the envelope system forces you to think about your expenses. It’s so easy to tap a credit card and forget about it, while cash makes you watch the money leave.

Now, if you’ve already got credit card debt, it’s important to get out from under those hefty interest rates. Taking out a lower-interest personal loan can help you consolidate that debt and pay it off faster.

Assuming your car has four wheels, that’s good enough for Dave Ramsey. Buying the newest model of anything is a waste.

“If you’re tired of the kitchen countertops or want to upgrade to the latest and greatest cellphone, think again … Don’t steal from your needs to pay for your wants,” he writes on his blog.

Ramsey says no one should buy a new car, unless they have a net worth in excess of $1 million. Cars lose a huge chunk of their value as soon as they’re driven off the lot.

“The average millionaire drives a four-year-old car with 41,000 miles on it, and of course it’s paid for. They haven’t made a car payment in decades, which is why they’re millionaires,” he adds.

When you do buy, be sure to compare auto loans from several lenders so you can get the best rate.

5. Don’t spend when you can invest

When Ramsey appeared on Larry King Live in 2015, the Dow was doing well and unemployment was steadily decreasing. King wanted to know: If the economy’s so great, why are Americans still suffocating in debt?

Ramsey said wage stagnation has played a significant factor, but that’s no excuse to let consumers off the hook.

“Americans have a spending problem,” he told King.

You don’t reap the benefits of a flourishing economy by consuming even more; it’s investing that brings wealth. One popular investing app lets you get started with as little as $1 and doesn’t charge commissions or trading fees.

6. Don’t go to a fancy college

You’re at the top of your class, so why wouldn’t you attend the best school?

According to a 2018 Georgetown study, three quarters of all jobs that pay more than $35,000 are held by people with some form of higher education — but don’t set yourself up for failure by saddling yourself with debt.

In 2020, the total amount of student debt in the United States is an estimate $1.56 trillion, and graduates are eager to find ways to deal with their unpaid loans.

Ramsey says the important thing is getting a decent education without taking out a loan — not the prestige of an Ivy League school.

“That’s the biggest lie we’ve ever believed: where you went to school has some correlation with your future success. It has almost zero,” he told CNBC last year.

7. Don’t splurge once you graduate

When you leave school and find your first real job, you might feel like you’ve got money to burn. Slow your roll.

“I tell young people who call our radio show that you’re already used to living like a broke college kid, so keep living like one until you start making grown-up money,” Ramsey told CNBC in 2018.

You don’t have to resort to eating instant noodles and drinking instant coffee; it’s more about the mentality of making every penny count.

By limiting your expenses and buying necessities on the cheap, Ramsey said, “you can clean up any debt you might have, build up your emergency fund and start saving for the things you want and need down the road like a better car and a down payment on a house.”

8. Don’t give your kids an allowance

Ramsey says America doesn’t have a debt crisis; it has a parenting crisis. Financial literacy starts at home, and parents are setting their kids up for failure by giving them an “allowance.”

“I just don’t like the word. Allowance kind of sounds like, ‘You’re not good enough, so I have to do something for you.’ It kind of sounds like welfare. Instead, we called it ‘commission.’ You got paid for doing chores. Work? Get paid. Don’t work? Don’t get paid,” he told CNN in 2014.

Make no mistake, Ramsey said, all the work he made his kids do was age-appropriate. “You’re 4 years old, we’re not going to send you off to the salt mines,” he joked.

If you have kids, one way to pay them is by giving them a special debit card for children that you control through an app. You can use it to assign chores and help your kids manage their “income.”

9. Don’t try to get rich too quickly

While it’s great to come into a sudden windfall, Ramsey says it’s better to build a fortune slowly and sustainably.

“Ninety percent of the [millionaires] I have met did it gradually,” Ramsey said on his radio show in 2017. “I’m not against getting money quickly … but there are all kinds of problems that go with it when it comes quickly…. How often have we seen the young athlete get money and it destroys their life?”

He said the Book of Proverbs sums it up: “Wealth grown hastily will dwindle.”

His advice isn’t just based on Biblical wisdom; Ramsey is also speaking from experience. He gained and lost a $4 million portfolio flipping houses before age 30.

10. Don’t buy an engagement ring from a jewelry store

You want to dazzle her, but you shouldn’t start your life together with a pile of debt.

On the Bobby Bones radio show in 2019, Ramsey was asked about the popular rule of thumb that helps suitors decide how much to spend on an engagement ring.

“The jewelry stores say three months’ [salary]. I say one month,” he quipped.

“Diamonds are like furniture. They’ve got a huge market, so where you buy it can be very, very important. If you can go to a diamond broker or someone who knows a little bit about diamonds, even a high-end pawn shop, you can get [rings] for a quarter on the dollar. And really good stones.”

Mon Dec 7 , 2020
(Bloomberg) — On Friday afternoon, Interactive Brokers bragged on its Twitter account: “Not to brag, but @benzinga named us the Best Trading Technology of 2020 based on our cutting-edge, global trading platforms.” By early Monday morning, however, those platforms were having technical trouble, effectively locking individual investors out of their […] 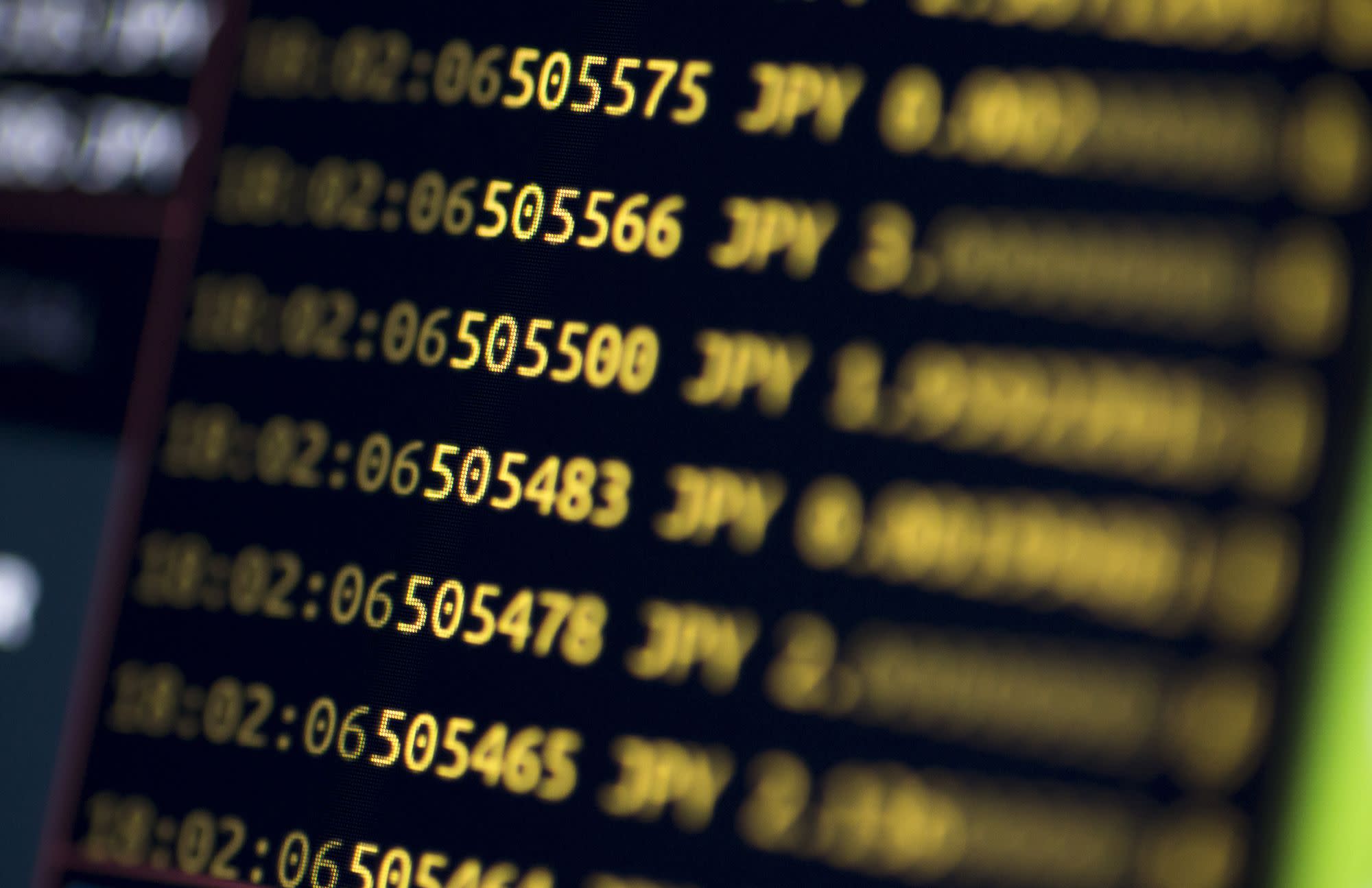