America is what it eats: Food fuels the pursuit of happiness. It powers our ambition, ingenuity and constitutions. We spend tremendous time and money filling our bellies. After putting roofs over our heads and paying for transportation, food is Americans’ greatest expense. But America’s feast is not dished out equitably […]

America is what it eats: Food fuels the pursuit of happiness. It powers our ambition, ingenuity and constitutions.

We spend tremendous time and money filling our bellies. After putting roofs over our heads and paying for transportation, food is Americans’ greatest expense.

But America’s feast is not dished out equitably on our dinner plates. Food fosters inequality and limits life, liberty and opportunity, Nancy Roman, the president and CEO of the nonprofit Partnership for a Healthier America, tells MarketWatch.

For a rich country, we eat poorly, studies show. Cheap calories today grow costly tomorrow, Roman says, as COVID-19 has made disturbingly clear. The diet was cast years before the pandemic even reached our shores: Many of the poorest Americans working on the frontlines suffer from heart disease and diabetes, two of the preexisting conditions that make the coronavirus so deadly. Empty calories fill hospitals.

All of this may seem like an unlikely subject for The Value Gap , our interview series about the economic dimensions of racism and inequality. But Roman, who has spent her career working with the United Nations, the food industry and food banks, makes a compelling case that these things are all connected. The battle for racial justice, for economic equality and social mobility, like so much else in America, sometimes comes down to a food fight.

MarketWatch: What we eat is a personal choice, but it’s also a consequence of industry, regulation and economics. Do you think too much blame is placed on individual decisions and not enough on these other factors?

I am not one that likes to heap blame and guilt on anyone in the past, but now we have the burden of knowledge.

MarketWatch: To what extent is diet making the pandemic worse — and what can be done about it?

Food is really the answer to building people’s immune systems and preventing these underlying conditions, which are not just affecting COVID, but so many other things from longevity to quality of life.

We have the burden of knowledge, so we have to ask different questions. My question isn’t, “Did the players of the past fail us somehow?” It’s “What are we going to do today?”

“
‘You can do this out of human compassion if you are really focused on the person, but if you’re a real “small g” economist, who says, “I only care about saving money,” then there is still a great reason to do it: to save money on health-care costs and everything down the road.’
”

MarketWatch: So what can we do?

Roman: Part of the way we do it is by getting in people’s faces and forcing them to confront this reality. It has been too convenient not to face the reality. And it is hard to face. The good news is we have been beating ourselves against the brick wall of trying to get big-box retailers to go into these neighborhoods, but now with online and delivery that is feeling less necessary, so we have fewer excuses.

MarketWatch: Are you saying that by spending more money to get better food in people’s hands today, we will save money tomorrow?

Roman: This is one of the big frustrations. It is so obvious that it would be such a savings. I always say that depending on your political persuasion, there is a good reason to do this. You can do this out of human compassion if you are really focused on the person, but if you’re a real “small g” economist, who says, “I only care about saving money,” then there is still a great reason to do it: to save money on health-care costs and everything down the road.

The challenge is it’s not an instant result. Democracy punishes solutions that take time. If you start improving diets today, you are not going to have six months later a COVID-resilient person. It takes a while. Although there is some science that shows you can improve metabolic health in a short period, you can’t quickly unwind existing diabetes and heart disease.

MarketWatch: In this country, isn’t it our right to eat whatever we please? To live free or diet? If I want to eat fast food for three meals a day, isn’t that my right? I like kale, but I am not sure I want someone else telling me I have to eat it.

Roman: I know, and this is a somewhat controversial view. About two years ago I was in Chicago speaking to 200 food executives. During the Q&A, a European food exec asked me, why is it in America we value freedom so much more? We have been unwilling to embrace some of the curbs. Europe doesn’t say you are not allowed to eat something, but they do regulate the size of packaging. They can drink sugary beverages, but the cans are smaller.

And frankly, I tend to be a small-g person and would prefer all of this to happen on a voluntary basis, with companies leading the way, than to regulate our way into success.

But I do think that one thing that differentiates America from other places is that we place an even higher value on freedom.

MarketWatch: You have said that by some measures, the governments of Ethiopia and Bangladesh do more for poor people’s nutrition than the United States. Is this a result of what you just said about our culture’s preference for freedom over health regulation?

Roman: I used to work with the U.N. food program in both Ethiopia and Bangladesh. They have publicly subsidized programs in Bangladesh; they take lentils and molasses and provide for people in need. Same in Ethiopia. We worked with the government of Ethiopia and the government worked with us, but they saw it as such a priority because they saw it created the potential for life.

In our country we have SNAP [Supplemental Nutrition Assistance Program] benefits, but relatively speaking in terms of per capita need, it is dwarfed by what some of these countries with much less are doing. It may just be that we have lost touch with the importance of food in building health.

We evaluate food strictly on taste and pleasure, but don’t evaluate based on its ability to fundamentally build the strength of our body and the resilience of our body to fight disease. So there are different ways to think about that that would allow for plenty of freedom.

MarketWatch: What role does the food industry and do food retailers have in changing this behavior?

Roman: One of the things I believe needs to happen is really challenging retail to innovate in distribution and reach, to innovate for the lower-income parts of the market. This happens in the profitable part of the market, but I think we have gotten stuck.

Since we have had delivery and since we have 44 states allowing SNAP benefits online, we have a whole new world of potential.

MarketWatch: We’ve heard a lot about food deserts, city neighborhoods or towns without much access to produce and quality groceries. If there is demand for healthier food, why is it not getting there?

Roman: Lack of access can mean you actually do have access to 100 gorgeous, good markets within one mile. In urban areas in the U.S., the biggest lack of access isn’t as much infrastructural, it is mostly a lack of means.

When you have had to feed your family with a lack of means [and there are] cheap, ultra-processed carbohydrates via fast-food chains on every corner, then that also becomes a cultural thing. It takes away the sensation of hunger but doesn’t really nourish the body. This has become an unintentional inequity.

Subsequent generations will look back on us having seen so clearly in the wake of COVID-19 and this racial unrest, and see so clearly the disparity of food equity in this country, and having it unaddressed. We have to call on corporate leaders and political leaders to address it.

MarketWatch: You worked a great deal with food banks, but you also have said that charity can sometimes get in the way of progress on this front. Is the issue that Americans find charity more palatable than government intervention?

Roman: We are a generous people, but we do what is easy. It is much, much harder to innovate and iterate and try new things that provide permanent access to places that have traditionally not had it.

When food gets prioritized, it’s always about having emergency food in the moment. But it’s better to solve through innovation and markets than taxes.

I am seeing renewed interest among both retailers and food manufacturers in getting into these conversations. They want to be part of a food-equity movement.

MarketWatch: Can food retailers really change what people want to eat? Is it just a matter of behavioral economics and the right nudges?

Roman: I hosted a dinner at my home for heavy hitters in food. Founder of a very well-known healthy brand was complaining to a retail executive that he couldn’t get shelf space. He said, “Come over to my place; I will give you the shelf space.” And it was a win-win: The product started selling so much more, and both reaped more of a profit.

There is a fear of replacing Oreos with better-for-you products. We know from behavioral economics that things that are at eye level [on shelves] go faster. So there are many things that can be done to nudge people to make better choices.

MarketWatch: There is tremendous innovation in food, new products every day. Why does that not translate into healthier eating?

Roman: You have tons of innovation for food that reaches the tip-top of [the] socioeconomic pyramid: things made of kale, pomegranate juice, there is a new superfood every single day dipped in chocolate made nutritious that will make us jump higher. They don’t even reach the middle class, let alone the lower income.

There is also tons of innovation at the bottom of the pyramid: salt, fat and sugar; every fast-food franchise is adding something new to burgers, cheese curd, taking French fries and making them nacho fries. To address this disparity, we need a national conversation on food, just like climate.

Thu Oct 15 , 2020
The change in spending habits brought about by coronavirus restrictions has helped make an online appliances retailer this year’s top U.K. midcap stock. AO World Plc shares have roughly tripled so far in 2020, making them the best performer in the FTSE 250 Index. They rose as much as 16% […] 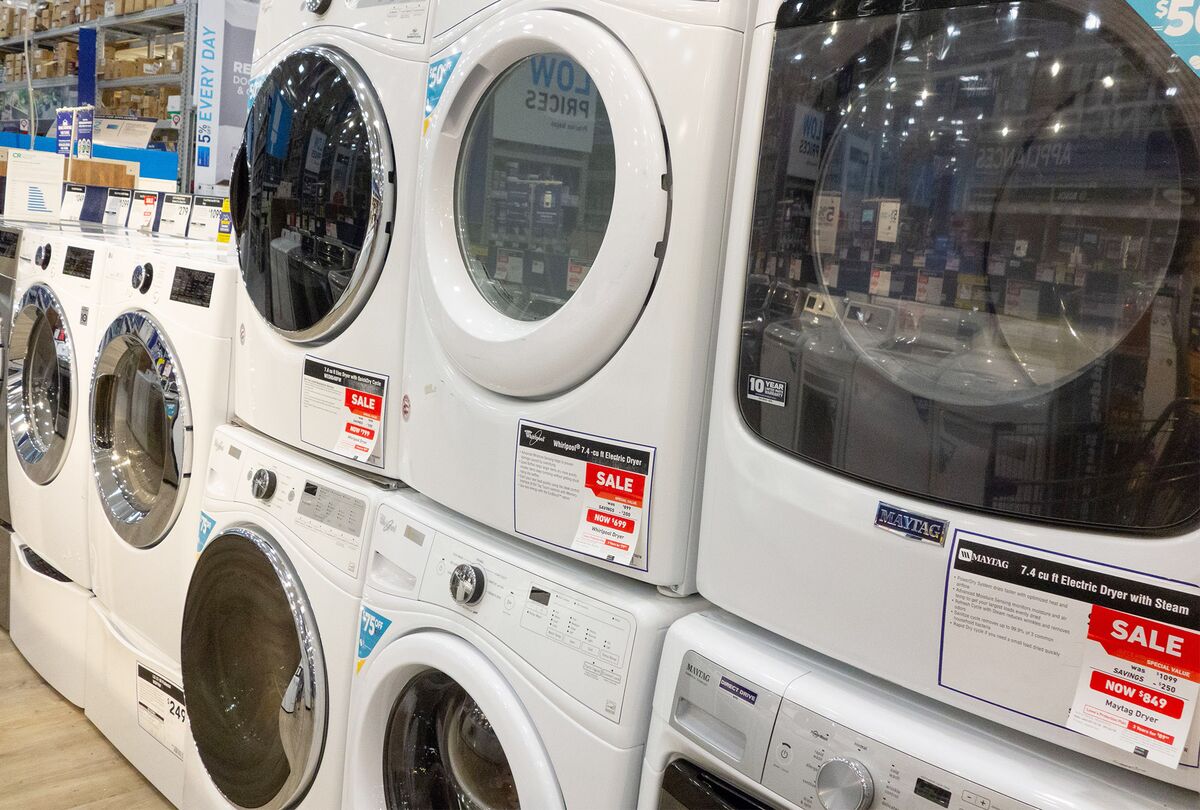