CLOSE Free Press writers Dave Birkett and Carlos Monarrez on Oct. 2, 2020, assess the Detroit Lions’ (1-2) matchup with the New Orleans Saints (1-2). Detroit Free Press Tyrell Crosby and four of his closest college friends loaded up their Sprinter van and drove north of Munich, just past a […]

Tyrell Crosby and four of his closest college friends loaded up their Sprinter van and drove north of Munich, just past a McDonald’s and beyond a large German home improvement store, to the site of one of the greatest atrocities ever committed.

Crosby, who will make his fourth straight start at right tackle Sunday for the Detroit Lions against the New Orleans Saints, spent two weeks this offseason traveling Europe, before the coronavirus pandemic hit, fulfilling a dream he had as a kid.

The group spent a few days in New York at the end of January, then flew to Munich, though Lisbon, Portugal, before bouncing to Zurich, Switzerland, Barcelona, Spain, and Faro, Portugal.

They took in a soccer match; Crosby’s favorite team is FC Bayern, and he got to go on the field before the game. They went sledding in the Swiss Alps. They did what most 20-somethings making their first trip abroad would do.

For subscribers: Red zone offense has been ugly, but here’s how they can fix it

And when one of Crosby’s former Oregon teammates, Khalil Oliver, realized how close the Airbnb they were renting in Munich was to the Dachau Concentration Camp Memorial Site, they took a detour from their fun to see a piece of history in the hopes that their experience would be a small step toward changing the world.

“Just to have that experience, to actually see firsthand an actual concentration camp was just so surreal,” Crosby said. “It was like a weird feeling of knowing and seeing all the pictures of what happened there. It was like, I really couldn’t even really put it into words on how impactful that was to me.”

Dachau is regarded as the first of hundreds of concentration, forced labor and extermination camps set up by Nazi Germany during Adolf Hitler’s rule.

Built on the grounds of an old gunpowder and munitions factory, Dachau accepted its first prisoner transports less than two months after Hitler was appointed Reich chancellor in January 1933. More than 200,000 prisoners were cataloged at the camp over the next 12 years. Thousands died from disease, malnutrition, abuse or were killed at a nearby rifle range, and countless others were moved to extermination camps in Poland.

Crosby said the magnitude of the terror was evident from the moment he stepped foot on the grounds.

“You have your main gate, and right inside the wall you have these massive moats surrounding it, and then you have the gates that are just all like barbed wire and everything,” he said.

Crosby and his friends solemnly toured the site, including barracks where prisoners were kept and a crematorium where bodies were burned. When they were done, they watched an English-language documentary detailing the horror of the time.

“Just seeing all the clips of people being loaded into trains, taking pretty much into camp, was just — it was insane,” Crosby said. “I started to tear up. It was just so powerful, and realizing the evilness of what was going on at that time.”

When Oliver suggested the group visit Dachau before they flew out of New York, Crosby was immediately on board for reasons that go beyond the natural curiosity that has made him one of the Lions’ most likable players.

[ Lions rule out fans at Ford Field on Nov. 1, still hope to have some Thanksgiving ]

Crosby grew up the youngest of four children in the Las Vegas suburb of Henderson, Nevada. His parents divorced when he was 5 or 6, and his mother, Susan McCarver, sometimes worked two jobs to support the family. He ate fruit by the can, occasionally went to bed without dinner, and usually had one pair of Vans shoes to last him the school year. Once, after seeing him wear his Vans to throw the shot put and discus, Crosby’s high school track coach bought him his own pair of spikes.

Often, when Crosby came home from school or practice, he found himself getting lost in his TV. He watched the Travel Channel, History Channel, Discovery Channel and National Geographic Channel religiously, mesmerized by far-off places and foreign cultures. 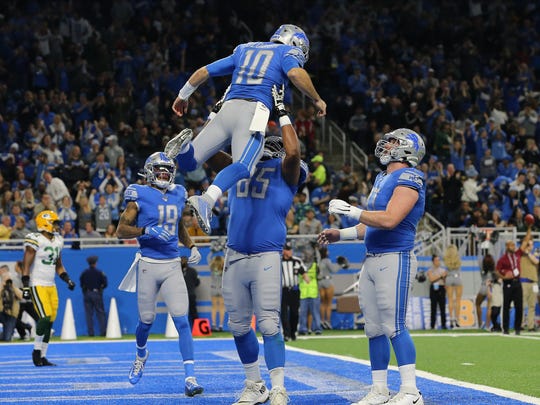 “We grew up pretty poor, so my experience of seeing other countries has always been through the TV, or like listening to someone else’s experience,” he said. “And growing up, I always wished and like dreamed of having the opportunity to go to the places I’d see.”

At Oregon, Crosby became close with a Jewish family who invited him over for home-cooked meals and sent him back with baked goods. He considers the family like a step-family to this day, and one of his friends, Adam Geller, “my brother.”

For that reason, plus his own personal experiences, Crosby has identified with some of the anti-Semitic behavior he has seen from afar, and going to Dachau was a step “just to understand other cultures’ struggles and just realizing that other people go through terrible tragedies within their culture and their history.”

“I know there’s a lot of anti-Semitic stuff online,” Crosby said. “And for me hearing that and then going there and then hearing it again, I’m like, ‘Do you guys understand just how bad the concentration camps were in Nazi Germany and just how much damage that did to the Jewish community and their families?’ It was just wild. It was just insane to me.”

Crosby posted a series of pictures from Dachau on Twitter two days after the Super Bowl with the caption, “Just so surreal knowing what occurred here in a very dark time in world history.”

I think about my visit to Dachau almost daily. However, you don’t need to visit sites to still educate yourself on a culture you have limited information on. So, I challenge you to read up and learn about a culture that is different than your own. https://t.co/igLwV44VIS

Five months later, after Philadelphia Eagles receiver DeSean Jackson made headlines for sharing anti-Semitic quotes attributed to Hitler online, Crosby took to the social media platform again to remind everyone to “educate yourself on a culture you have limited information on.”

His willingness to engage about his trip online led to an offer to join young adults and Holocaust survivors on a visit to Auschwitz next offseason, something he and his friends hope to do if the pandemic allows.

“Initially, I felt more frustration than outrage (about Jackson’s comments),” Crosby said. “But also in the back of my head I’m like, ‘Rather than feel that way, use my platform on social media to try to educate people who might not know about the history of all the things the Jewish community had to go through, especially during Nazi Germany.’”

McCarver said she noticed a change in her son when he returned from Germany.

“That was the one place that he visited that I could just see it in his face,” she said. “He felt something he’s never felt before when he was there and I think he’ll forever be changed by that. I think the sadness and the horrific things that went on, he felt all of that.”

Crosby has been one of the Lions’ most prominent voices on social media over the past eight months, about anti-Semitism and other issues, and he largely has taken the approach of trying to educate himself and others to help everyone understand that “different cultures go through their own things, different races have their own issues.”

Though he’s known by friends and teammates for his gentleness and soft-spoken nature, Crosby said he has experienced “terrifying” moments of racial discrimination that have helped him find his voice.

Broncos outside linebacker Von Miller spins around Lions offensive tackle Tyrell Crosby during the second half of the Lions’ 27-17 loss on Sunday, Dec. 22, 2019, in Denver. (Photo: Jack Dempsey, AP)

Last year, Crosby said he was chased out of a store by employees who demanded to see his receipt for a purchase because they thought he stole something. While driving his Ford Raptor, he has had people pull up next to him, roll down their windows and ask if he stole the truck. And while making the 14-hour drive home from Oregon during spring break one year, Crosby said he was pulled over late at night in a small Nevada town for doing 42 mph in a 35 mph zone, and had two police officers draw their guns on him.

“When you feel that scariness and just afterwards, you really look back on what happened and realize there was no need to get that drastic for something so minor,” Crosby said. “It’s like, it’s irritating and so frustrating for people. Like one example off a movie is like ‘Boyz n the Hood.’ There’s one scene where they get pulled over and they’re just driving home. And they get pulled over and afterwards he gets super frustrated and just like starts crying. That emotion’s real for many people that deal with that situation. It’s just not a movie scene, it’s a legitimate feeling that so many people feel.”

On the football field this year, Crosby has held his own while getting the most extensive playing time of his career. Ticketed for swing tackle duty at the start of training camp, he replaced the injured Halapoulivaati Vaitai in the starting lineup Week 1 and played well enough that the Lions moved Vaitai to guard when he returned last week.

Off it, Crosby has become a prominent part of the Lions’ voting rights initiative. Last month, he took part in a webinar with actress Alyssa Milano and legislators from the states of Washington and Colorado encouraging people to vote.

Through it all, Crosby said he has tried to keep one thing in mind: Using a platform he never thought he’d have to do right for everyone watching.

“I had my older brother, but never a specific athlete to be like, ‘That’s someone I want to look up to,’” Crosby said. “And not in like a bad way, cause I know there’s plenty of people. I just never did, cause it was just so different growing up cause there wasn’t so much social media

Sun Oct 4 , 2020
Destroying city’s old buildings I continually read of new businesses tearing down “older” buildings to build new ones, and it grieves me to see this happen in our fair city. From the “old Macaroni Grill” on far north Academy (now a Lazy Dog restaurant) and the Elephant Bar and Grille […]