Here are some of the strange things about Oracle’s deal for TikTok’s U.S. social media platform that make it seem like a sop to President Trump. — Structuring the deal as one in which Oracle is a “trusted tech partner” of TikTok rather than an outright buyer doesn’t do anything […]

Here are some of the strange things about Oracle’s deal for TikTok’s U.S. social media platform that make it seem like a sop to President Trump.

— Structuring the deal as one in which Oracle is a “trusted tech partner” of TikTok rather than an outright buyer doesn’t do anything to wall off the app from its Chinese founders, which supposedly was at the heart of Trump’s concern about the app.

— TikTok, which allows users to post short videos online, is a major hit among consumers, especially young users. To say Oracle has never served that market would be a huge understatement; Oracle’s core market is business — most consumers are probably unaware it even exists.

The White House accepting such a deal would demonstrate that this exercise was pure grift.

— Trump seemed to put his thumb on the scale favoring Oracle in its competition with Microsoft for TikTok, stating last month, “I think Oracle is a great company, and I think its owner is a tremendous guy. He’s a tremendous person. I think that Oracle would be certainly somebody that could handle it.”

He was referring to Oracle co-founder Larry Ellison, one of the very few Silicon Valley figures openly supporting him.

The rivalry for TikTok was initiated by Trump himself, through an executive order he issued on Aug. 6 threatening to ban TikTok from the U.S. unless a sale deal was reached by Sept. 20.

Microsoft seemed the most likely buyer until the Chinese government imposed restrictions on the export of artificial-intelligence technology such as that used by TikTok.

The restrictions threw a wrench into Microsoft’s plans, creating an international stalemate between Trump’s demands and Chinese policy.

Oracle’s deal appears to meet the Chinese restrictions, but doesn’t appear to meet the Trump order’s terms because it doesn’t appear to impose security rules on how user data can flow from the U.S. to China. It’s subject to a ruling by the Committee on Foreign Investment in the United States, which is an agency of the Treasury Department.

“A deal where Oracle takes over hosting without source code and significant operational changes would not address any of the legitimate concerns about TikTok,” Alex Stamos, Facebook’s former chief security officer, tweeted Sunday. “The White House accepting such a deal would demonstrate that this exercise was pure grift.”

The Oracle deal does have the potential to lower the temperature of at least one conflict between Trump and China by allowing TikTok to continue operating in the U.S. without undergoing a complete sale. Since Ellison is a Trump booster, moreover, the betting appears to be that the deal will go through.

TikTok, which currently claims 100 million U.S. users, was created by Chinese entrepreneur Yiming Zhang through his company, ByteDance. The company says no foreign country, China or otherwise, owns any “significant interest” or exercises any control over it.

But the integration of government and private interests in China makes it plausible that there could be some sharing of data collected by TikTok with the government.

Trump has said that prospect is the core of his issue with TikTok. In issuing his executive order, Trump cited the “unusual and extraordinary threat” that TikTok could therefore pose a danger to the U.S. national interest.

But there is also reason to believe that Trump’s concern about TikTok could be personal.

TikTok users claimed to have been behind mass bogus ticket reservations in July for Trump’s Tulsa campaign rally, which embarrassingly unfolded with thousands of empty seats. And comedian Sarah Cooper has used the platform to become a viral celebrity online thanks to posts in which she lip-synchs Trump’s words with comic effect.

Even before Trump issued his executive order, he was demanding a sale of TikTok, and even asserted that any sale should include a payment to the U.S. Treasury — a demand not known to have any precedent, much less legal authority.

He said in early August that he had told Microsoft Chief Executive Satya Nadella that “a very substantial portion of that price is going to have to come into the Treasury of the United States because we’re making it possible for this deal to happen.”

A TikTok acquisition would fit logically into Microsoft’s consumer technology ambitions. Microsoft’s XBox is among the most popular gaming platforms, and it has struggled to build on that foundation, buying the maker of the popular “Minecraft” video game in 2014. Two years later, the company spent more than $26.2 billion for the professional social media company LinkedIn. The TikTok acquisition would have added 100 million more users to its online user base.

Microsoft had planned to sequester TikTok’s technology and data outside China, specifically in the U.S. and Singapore, to assuage U.S. government concerns that personal information could leach back to Beijing.

“We would have made significant changes to ensure the service met the highest standards for security, privacy, online safety and combatting disinformation,” Microsoft said Sunday after the Oracle deal was confirmed.

Trump’s pressure to sell TikTok’s U.S. operations plainly irked the company and the Chinese government, which responded with the export rule that effectively blocked Microsoft’s plan.

TikTok and ByteDance filed suit in Los Angeles federal court on Aug. 24 to block the executive order. The company said that it had submitted to the Committee on Foreign Investment in the United States extensive documentation of security measures to keep U.S. user information secure in connection with a CFIUS inquiry into its acquisition of Music.ly, a Chinese video platform. CFIUS declined to approve that transaction, TikTok and ByteDance said.

Trump went ahead with his executive order, the companies said, despite failing to “identify any unusual and extraordinary threat posed by TikTok — or any actual national security threat at all.” (Emphasis in the original.)

A successful Oracle bid could get Trump out of a bind of his own making. An outright ban on the app, as Trump has promised, would risk alienating voters — especially younger ones who have embraced the platform.

Oracle’s deal is hard to assess because its stated terms are murky. Oracle said Monday only that “Oracle will serve as the trusted technology provider” to ByteDance. On the surface, it doesn’t appear to include the transfer of any TikTok technology outside China.

Ellison may be the highest-profile Trump supporter in Silicon Valley. On Feb. 19, Ellison hosted a fundraiser for Trump that prompted some 300 Oracle employees to stage a one-day walkout. A petition was posted on change.org calling on Ellison to cancel the fundraiser, held at his estate in Coachella Valley.

Temperature checks. Spread out desks. How the first day went in a reopened Sacramento school

Mon Sep 14 , 2020
There were temperature checks for students and desks spread out. Hallways marked so students would only walk in one direction, cutting down on congestion. Everyone was in masks. This was the school experience on Monday at St. John Vianney in Rancho Cordova, one of 19 campuses in Sacramento County that […] 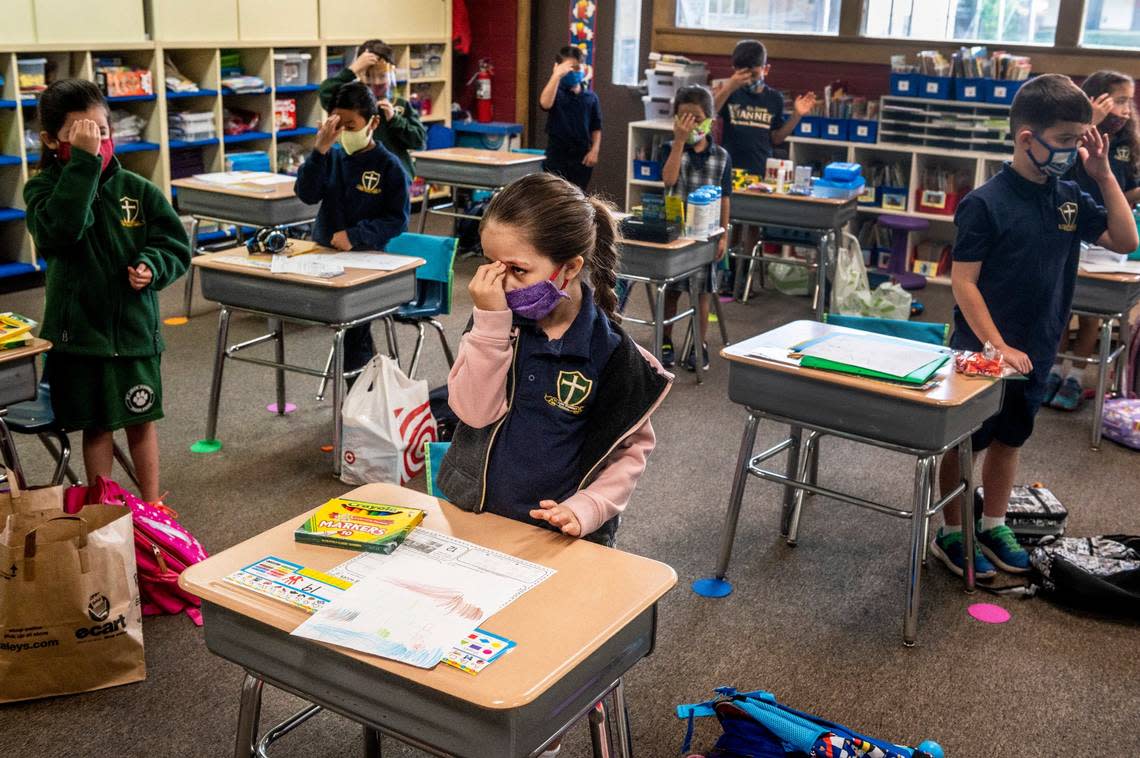