As much as humans might hate the COVID-19 pandemic, an alternate viewpoint may be gaining ground among other family members living in the same house. Consider the outlook of a dog:   You mean our bipedal benefactors don’t have to leave us every day to go to work? They have more […]

As much as humans might hate the COVID-19 pandemic, an alternate viewpoint may be gaining ground among other family members living in the same house.

Consider the outlook of a dog:

You mean our bipedal benefactors don’t have to leave us every day to go to work?

They have more time to give us attention?

This year might even be the best ever for canine companionship. More dogs are finding homes. Fewer are left at shelters. The dog economy is booming, especially for a product that sums up the whole story.

Sales have increased to $24 million for the 24 weeks ending Aug. 15, up 202% from the same period last year, according to Nielsen research.

“There were more people adopting puppies, and so there were more people doing house-training,” said Pam Runquist, executive director of the Humane Society Veterinary Medical Association. “I think also, in places like New York City, people were not wanting to go outside and were utilizing those methods.”

The maker of a dog diaper in Pennsylvania called the PeeKeeper is among those who say they’ve been “busier than ever,” part of a larger social trade-off. Instead of going out and interacting at work with human colleagues, people are forced to stay home and fight persistent loneliness with man’s best friend.

This has led to a bull run for the dog market. For the diaper sellers, that includes new owners of so-called pandemic pooches, as well as sick or elderly dogs, said Lisa Williams, president of PeeKeeper LLC.

Want more evidence we’ve entered the dog days of this never-ending pandemic? There are surges in vet visits, rising sales of leashes and even a spike in dog-buying scams. Twenty percent of respondents to a Nielsen survey in July said they adopted one or more dogs or cats between March and June, up from less than 5% over the same time last year.

Placements of low-shedding doodle hybrid breeds have climbed almost 50% year-over-year, according to PuppySpot, a service that helps responsible breeders place their puppies.

At shelters, COVID-19 precautions restricted public visits starting in March, which led to fewer dogs entering them and even decreased adoptions in some areas, according to data cited by the Humane Society. But that also turned out to be good news for dogs.

Instead of housing pups and cats, shelters instead transitioned “almost solely to placement of animals into foster homes,” said Kitty Block, president and CEO of the Humane Society of the United States. Block said the rise of animals in new foster homes “has been significant.”

Traveling with a dog:Tips for keeping your pet safe while riding in a vehicle

In one case, an 8-year-old chihuahua-pug mix in Indiana named Dominic had been having a hard time. Dropped over a fence in a yard, he developed a bulging eye and was brought to an emergency vet facility.

“He needed a foster home to recover,” said Samantha Morton, the state director of the Humane Society. “We thought with the pandemic, we’d be home all the time to help and care for his needs, and obviously fell in love with him. The rest is history. We adopted him.”

Dominic since has had his eye removed and is “feeling much better,” she said.

Shelter euthanasia is down 43% because of decreased intake, expanded fostering and an increase in the percentage of pets finding homes from January to June this year, according to Shelter Animals Count, a non-profit that helps share data on shelter animals. The community adoption rate for pets is 73% during the period, up from 64% last year, according to the organization.

► This in turn has led to more dog walks and playtime. Dog leash sales increased to $44.6 million, up 13% for the 24-week period ending Aug. 15, according to Nielsen, which also reports pet toy sales increased 18%, to $243 million, for the same period.

► Veterinary businesses have felt the wave from both new dog parents and owners who have more time to notice irregularities in their dogs’ health. Pandemic-related restrictions initially slowed vet visits, leading to pent-up demand later after broader shutdowns lifted.

Average daily revenue at vet practices increased more than 14% from July 1 through the last week of August compared with the same period last year, according to vet industry tracker VetSuccess. Revenue from visits for vaccines rose more than 21% during that time.

For dog owners: 15 things every dog owner needs from Chewy

Buckle up, Rover: Traveling with a dog in the car: Tips for keeping your pet safe while riding in a vehicle

“Vets are very busy right now,” Runquist said. People “may have noticed their animal is scratching or losing fur, or not exactly feeling right.”

In a quarterly earnings call last month, Trupanion CEO Darryl Rawlings said: “When people have a lot of uncertainty, when people are at home more, people lose their jobs, often, people are saying this is a good time to bring a pet home to train them.”

► Other pet businesses have been trying to keep up. Online pet product store Chewy said it had its busiest quarter ever ending May 3, with a 46% rise in net sales to $1.62 billion. The company’s stock price topped $60 in August after slipping below $23 in March.

A similar swell has swept through Petco, another pet product retailer.

► Not surprisingly, fraudsters have tried to cash in on the canine craze as well. In a typical scheme, they try to sell dogs online, without a physical meeting, and then keep demanding payment for various services to complete the transaction.

“The victim stays latched into this until they catch on and stop sending money, or they run out of money,” said John Breyault, vice president at the National Consumers League, a nonprofit consumers organization. “Don’t send any money unless you’ve seen the animal in reality with your own eyes. Until that happens, there’s no reason any reputable breeder would ask you to send money.”

An online pet fraud watchdog, PetScams.com, reported a spike in internet traffic to its website in recent months, indicating heightened scam concerns from consumers. It was up to more than 100,000 users a month since May, compared with about 37,000 in March.

Breyault encourages victims of scams to report them to police, the Better Business Bureau or Fraud.org.

► All of this makes it a very exciting time to be a dog and a frequently expensive time to be a dog parent. Those diapers still help keep the peace at home for dogs in heat, territorial markers or senior dogs with incontinence. An Instagram post on Aug. 31 showed a senior dachshund named Chloe lying on her back, paws up, wearing a diaper like a newborn.

“We’ve recently made the move to diapers because of Chloe’s incontinence,” said the Instagram post from the dog’s parent. “She likes to play opossum when she sees me grab a new diaper… Rolls over, totally uncooperative, and then just stays like this until I walk away.”

From a dog’s point of view, the longer this kind attention lasts, the better.

At the same time, the pandemic poses risks for dogs, too. Pet parents sick with COVID-19 have had to surrender dogs and cats at shelters, according to anecdotal reports received by the Humane Society.

In the meantime, Block said, “as long as foster numbers stay high and overall population in the shelters stays low, we’re on the right track.”

Wed Sep 2 , 2020
True to its name, San Francisco-based start-up Fast is bringing speedy, one-click online checkout to e-commerce. Hot off the heels of its $20 million Series A, the company unveiled Fast Checkout on Wednesday. The solution allows shoppers to conduct online purchases with a single tap, regardless of whether they’re using […] 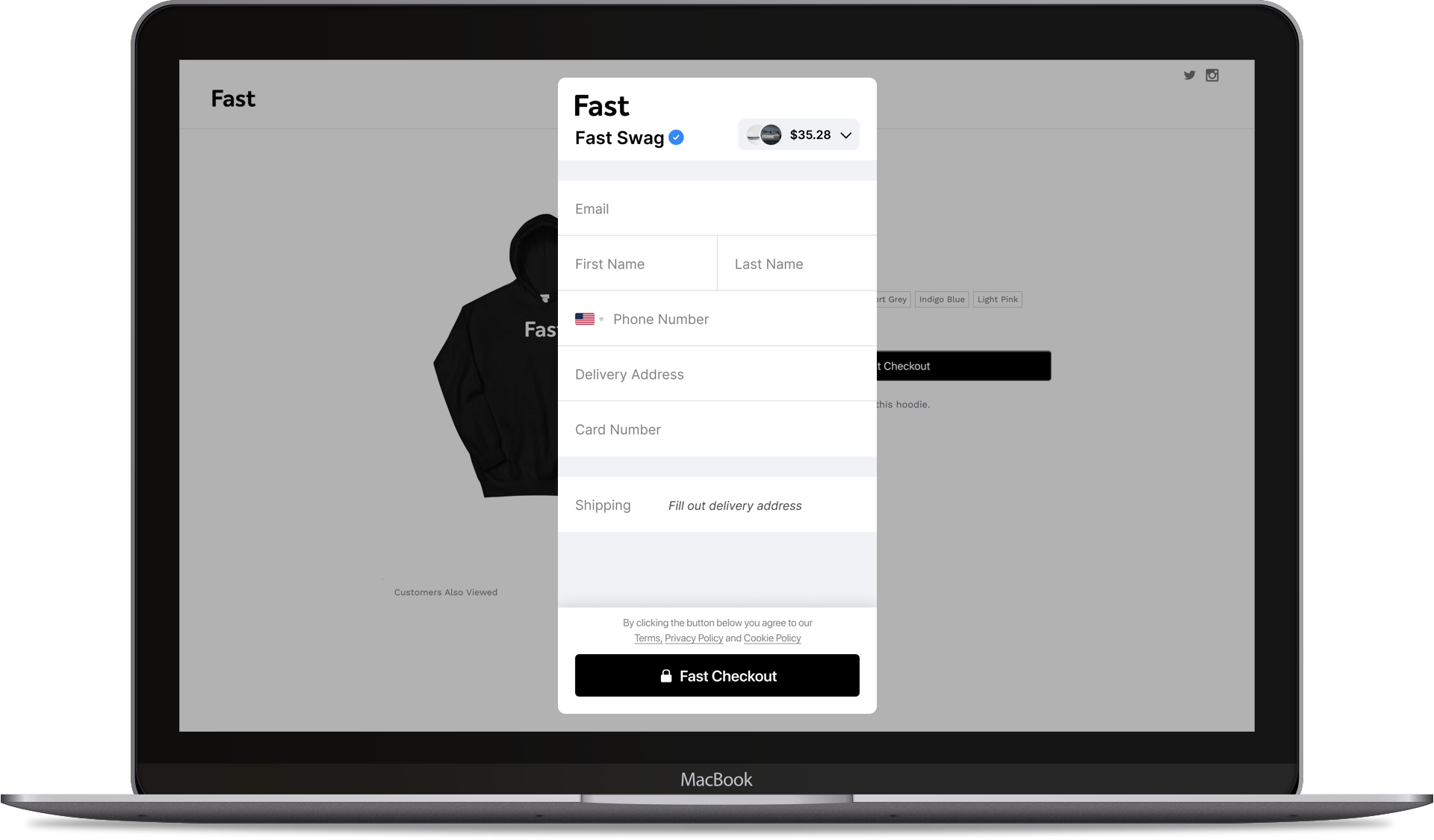