Donald Trump has cancelled his Republican convention speech in Florida because of the coronavirus outbreak there, saying he did not want to “take any chances”.

The US president had moved his speech to the state from North Carolina, claiming the governor there would not let him hold one with a big crowd, but now has cancelled that plan.

Mr Trump said he will still do a speech formally accepting his party’s nomination but that the details had not yet been worked out, suggesting it was possible it could be online only.

“I’ll still do a convention speech in a different form but we won’t do a big, crowded convention per se. It’s just not the right time for that,” Mr Trump said.

Disney has postponed the release date of its blockbuster Mulan remake indefinitely amid a surge in coronavirus cases across the US.

It was part of a wider reshuffle by the entertainment giant, as it also pushed back four Avatar films and three untitled Star Wars movies.

This is the fourth delay for Mulan, which was on the verge of release on March 27 when the pandemic closed cinemas around the world.

Mulan, which stars Lui Yifei in the lead role, has now been postponed indefinitely.

A Disney representative said: “Over the last few months, it’s become clear that nothing can be set in stone when it comes to how we release films during this global health crisis, and today that means pausing our release plans for Mulan as we assess how we can most effectively bring this film to audiences around the world.”

Sony also announced the upcoming Spider-Man sequel starring Tom Holland had been delayed by a month to take advantage of Avatar 2 vacating the Christmas 2021 slot.

While cinemas in England were allowed to reopen from July 4 – as long as social distancing guidelines were followed – the picture across North America is much more uncertain.

New York City and Los Angeles, the two biggest markets in the US, have no concrete plans for reopening cinemas.

Despite infection, Brazilian president is out and about

Brazilian president Jair Bolsonaro refused to let his case of coronavirus keep him down yesterday, going for a spin on a motorcycle and chatting maskless with a team of groundskeepers outside the presidential palace.

Bolsonaro, 65, has been in quarantine at the Alvorada Palace in Brasilia since testing positive for the new coronavirus on July 7. He had to cancel upcoming travel plans after a new test came back positive again Wednesday.

The South American country has the second-biggest outbreak in the world, after the United States, with nearly 2.3 million infections and more than 84,000 deaths.

Bolsonaro, who has compared the virus to a “little flu” and condemned the economic impact of stay-at-home measures to contain it, said on Facebook he was feeling “great.”

He has also been spotted in the gardens feeding – and occasionally getting bitten by – rheas, a South American bird related to the emu.

A law firm has filed a class action in an Australian court against Carnival Corp’s Ruby Princess cruise ship alleging mishandling of a coronavirus outbreak on board the ship.

The cruise ship has also become part of a homicide investigation in Australia as one of the country’s deadliest virus infection sources.

“It is not our intention to respond to the assertions of class action lawyers,” a Carnival Corp spokesman said in an emailed statement.

Mothers are unlikely to pass virus to newborns

Mothers who have Covid-19 infection are unlikely to pass the virus to their newborns if appropriate hygiene precautions are taken, a small study suggests.

The findings, which involved 120 babies and their mothers, suggest that mothers can breastfeed and stay in the same room as their newborns, if they use face coverings and follow infection control procedures.

The research is published in The Lancet Child & Adolescent Health journal.

The Royal College of Obstetricians and Gynaecologists in the UK recommends that mothers should share a room with their babies and breastfeed, with appropriate precautions.

The World Health Organisation (WHO) also advocates a similar guidance, emphasising the benefits of breastfeeding outweigh the potential risks of transmission.

Restrictions were reintroduced in Australia’s most populous state of New South Wales today as authorities battle to control fresh coronavirus clusters that have emerged in Sydney over the last several days.

Group bookings at restaurants, cafes and clubs will be limited to 10 people and patrons inside a venue will be capped to 300 in rules that take effect amid a growing cluster stemming from a Thai restaurant in suburban Sydney.

Wedding and corporate events will be limited to 150 people with strict social distancing rules including a ban on singing, dancing and mingling, while only 100 can attend funerals and places of worship.

Australia has so far escaped the high Covid-19 casualty numbers of other nations, with just over 13,000 infections and 133 deaths from the virus as of Thursday.

Victoria state yesterday reported five deaths from Covid-19 in the previous 24 hours and the third-highest daily rise in cases.

A flare-up of infections in Melbourne, the state’s largest city, prompted the government to enforce a six-week partial lockdown and make face masks mandatory for its residents or risk a A$200 (£112) fine.

Less than 8pc of Mexico’s firms received government support even as an economic recession deepened in the pandemic, which has sharply boosted activity at funeral homes.

That comes as Mexico’s economy is forecast to contract by up to 10pc or more in 2020, and millions have lost their jobs. The finance ministry and the central bank have said the recession will be the worst since the 1930s Great Depression.

Just over half of Mexico’s firms suspended operations, the survey showed.

The main reason companies said they did not get aid is because they were not aware they could.

Meanwhile, services at large funeral homes leapt 47pc to an average of 516 services per home in May, from 351 in February, the second poll showed.

Mexico has reported 362,274 known cases and 41,190 deaths, though the government admits the real number of infected people is likely significantly higher.

US coronavirus deaths top 1,000 for a third day in a row

The United States yesterday recorded more than 1,000 deaths from Covid-19, marking the third straight day the nation passed that grim milestone as the pandemic escalates in southern and western US states.

Fatalities nationwide were recorded at 1,014 on Thursday, with not all states reporting. Deaths were 1,135 on Wednesday and 1,141 on Tuesday.

Even though deaths are rising in the United States for a second week in a row, they remain well below levels seen in April, when 2,000 people a day on average died from the virus.

Yesterday, the United States  also passed a total of more than 4 million coronavirus infections since the first US case was documented in January, according to a Reuters tally.

Requirements that residents wear masks in public have become the subject of a fierce political divide, as many conservatives argue that such orders violate the US Constitution.

US President Donald Trump, a Republican who has rejected a nationwide mask rule and been reluctant to wear one himself, this week reversed course and encouraged Americans to do so.

Supermarkets: It’s up to police to enforce face masks, not us

Major supermarkets and coffee chains say they will not enforce new rules which say customers should wear face coverings from Friday.

Sainsburys, Asda, Co-op and Costa Coffee are among retailers saying they have no intention of policing the laws, which carry a penalty of a £100 fine.

It comes after the Police Federation of England and Wales, which represents rank-and-file officers, said it was “unrealistic and unfair” to expect them to patrol the aisles looking for people breaking the coronavirus regulations.

Mike Pompeo, the US secretary of state, called China a “Frankenstein” country and appealed to America’s allies to join the struggle against a “new tyranny”.

In rhetoric that echoed the Cold War, Mr Pompeo compared China to the Soviet Union and declared decades of US engagement with it a dismal failure.

He said Nato, the United Nations, the G7, and “freedom-loving nations” must use “more creative and assertive ways” to pressure the Chinese Communist Party to change.

Mr Pompeo added: “We imagined engagement with China would produce a future of bright promise. But today we’re all still wearing masks and watching the pandemic’s body count rise because the CCP failed in its promises to the world.”

.@SecPompeo: Changing the Chinese Communist Party’s behavior cannot be the mission of the Chinese people alone. Free nations have work to do to defend freedom. I have faith we can do it. I have faith because we’ve done it before. pic.twitter.com/RHNVeMCneg

Fri Jul 24 , 2020
“Your cargo has been rolled.” Not only does that statement elicit groans from customers, it causes delayed cargo, more administrative work and often additional commercial costs. “With our newly launched loaded as booked quality promise, we spare our customers these headaches and inconveniences by promising to load more than 95% […] 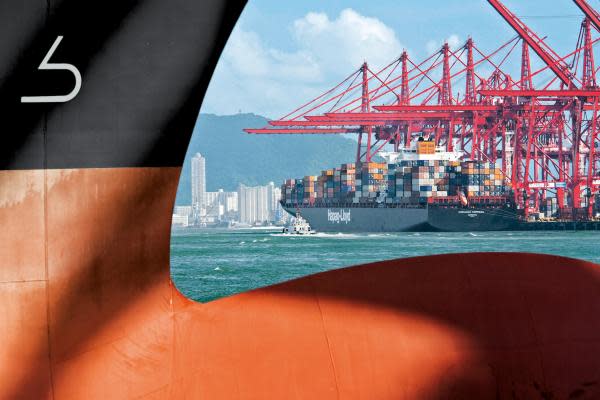