On the surface it seemed like little more than a courtesy notification — a press release sent out to fill the silence on an otherwise slow news day in late October. But there may be far more than meets the eye to the new product category that online auction site […]

On the surface it seemed like little more than a courtesy notification — a press release sent out to fill the silence on an otherwise slow news day in late October. But there may be far more than meets the eye to the new product category that online auction site eBay (NASDAQ:EBAY) is officially adding to its mix.

That new category? “Certified refurbished” electronics. The company is working with brands such as Dirt Devil, Cuisinart, iRobot, Philips, and Acer to facilitate the sale of like-new items to eBay shoppers. Prices for these goods (which come packed in their original boxes with all required accessories) are expected to be discounted up to 50% off their typical in-store price.

Up for grabs is a piece of the global refurbished electronics market that’s worth around $10 billion per year, according to inventory liquidation specialist Liquidity Services (NASDAQ:LQDT). If the electronics sliver of the refurbished arena works out well enough, though, eBay could decide to widen its doors to other types of products among the $309 billion worth of goods that U.S. consumers alone returned to retailers in 2019. 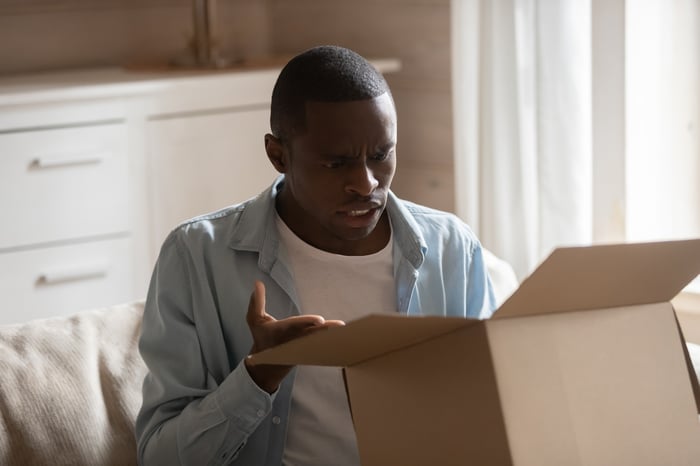 Big numbers, no matter which ones you choose

Take both numbers with a grain of salt. Refurbished goods reseller Back Market pegs the electronics piece of this market at $80 billion, and Appriss Retail’s guess that U.S. online and offline retailers had to handle $309 billion worth of customer returns last year is just that — a guess. Other sources suggest the figure is in excess of $500 billion any given year.

The fact that the estimates vary so dramatically is evidence of just how fragmented the space is. It’s also not clear how much of this returned merchandise can be refurbished and resold.

There is one clear reality though: Given eBay’s annual revenue on the order of $10 billion, capturing even a small piece of this market could make a difference.

It’s the fragmentation of this arena, however, that’s at the heart of eBay’s opportunity. The company can use its reach and unique platform to start consolidating this business. More important, it can arguably do it better than rival Amazon (NASDAQ:AMZN) could.

Yes, Amazon and eBay both already offer refurbished items. What’s changing here is the level of credibility eBay will bring to the premise. The site will facilitate the offer of a two-year warranty to support the sale of these items, but perhaps more than that, it will more readily connect sellers with individual buyers.

The move plays into an eBay strength Amazon doesn’t have.

Amazon’s inventory system lends itself to selling new, identical items over and over again. There’s little room in the Amazon apparatus, however, to deal with unboxed or damaged items returned by its customers. There’s no easy or effective way for Amazon to relist one returned item from its own returned inventory as refurbished. So, rather than fixing what can be fixed and returning defective items to their manufacturers, the e-commerce giant sells these items by the pallet for a fraction of their previous retail value. Its sheer size and high level of automation ultimately work against it in this regard.

This is in contrast with eBay’s approach, where each seller can (and generally does) photograph, describe, and list one particular item at a time to best explain its condition. The seller can sell one unique item at a time, but can also list a bunch of identical refurbished items just as easily.

It’s all more work than Amazon’s listing process, to be sure. But, this allows for the sorts of bargains most regular eBay shoppers are looking for. They’re certainly not strangers to used items.

The beginning of something big

It remains to be seen just how much incremental revenue these certified refurbished listings will add to eBay’s top line. The online selling platform is certainly well-positioned to do well with it, but as was noted, this is a very fragmented business. Liquidity Services is one of the more prolific names in the business, but it’s only generated a little over $200 million in revenue over the course of its past four reported quarters. That’s still only a fraction of the refurbished returns market, and much of that business was driven by sales of corporate assets rather than retailer’s unsellable inventory.

This is a niche piece of the retailing business that’s ripe for the sort of consolidation that eBay — and maybe only eBay — can drive. It will take time to build it, but this official category has the potential to be a major, much-needed growth engine.

Thu Nov 5 , 2020
LONDON (Reuters) – Lloyd’s of London has dropped ambitious plans to set up its own electronic exchanges and will work with other existing platforms to speed up the underwriting process and cut costs, the commercial insurance market said on Thursday. Lloyd’s said last year that it planned to launch two […]