It’s Monday, Oct. 19 and today is the first day of in-person early voting in Florida. If enthusiasm is as high as it has been in other states, we may be headed to a record turnout election, despite the pandemic. Consider: As of Sunday, with just over two weeks left, […]

It’s Monday, Oct. 19 and today is the first day of in-person early voting in Florida.

If enthusiasm is as high as it has been in other states, we may be headed to a record turnout election, despite the pandemic.

Consider: As of Sunday, with just over two weeks left, more than 2 million votes had already been cast through mail-in ballots, compared to 2.7 million cast by Election Day 2016. Democrats have the early edge as more than 1.2 million Democrats had voted by mail in Florida, compared to 754,000 Republicans. Of the 2 million votes already cast, Democratic party officials say 350,000 of them are Democrats who didn’t vote in the last election.

The pressure is on Trump supporters to reverse that advantage. Republicans suggest that Democrats may have tapped out their base. Based on their data, they say, there are 471,000 more high-propensity Republican voters left to vote in Florida than there are Democrats.

So how safe is it is to vote in person? We asked infectious disease doctors who told us that voting at the polling place is a relatively safe activity, comparable to grocery shopping — if everyone wears a mask.

Wafer-thin margins: The Democrat’s vote-by-mail advantage is also belied by the polls, where Biden holds a wafer-thin lead. According to Real Clear Politics, the average of the Florida-only polls have Biden up by 1.4 percentage points.

That’s not only narrow, it is also within the margin of error.

What does all this signal? Recount prospects.

Mail-in rejections: If Florida has another uncomfortably close election, the unprecedented spike in mail-in ballots could spell trouble this year. Florida’s decentralized voting system means that the way ballots are rejected for a mismatched signature or other error is not uniform across the state. Research from the University of Florida shows that amid those inconsistencies, young and minority voters in Florida are most likely to have their ballots rejected.

And as of last week, the number of invalid ballots flagged for rejection (more than 11,000) had already exceeded the number of votes that decided the 2018 U.S. Senate race. It’s all shaping up to make some worry that uncounted vote-by-mail ballots could be the hanging chads of the 2020 presidential election.

Ballot fix: What should you do if you make a mistake on your ballot? You have until 5 p.m. on Nov. 5 to cure your errors. Here’s a primer.

Crisscrossing candidates: With voters now flocking to the polls, expect the revolving door of presidential candidates into the state to continue. Last week we saw Democrat Joe Biden come to Democrat-heavy Broward for a drive-in rally in the heavily Caribbean-American city of Miramar.

President Donald Trump was here three different days. First in Sanford on Monday, then in Miami, where he appeared at the town hall at the Perez Art Museum Miami.

The president continued to draw pandemic-era crowds bigger than some college football teams. On Friday, he entered the Ocala International Airport hangar to the tune of The Village People’s 1978 hit “Macho Man.”

Also last week, Vice President Mike Pence traveled to the Memorial Cubano in Tamiami Park to deliver more of the anti-socialism-themed message. And on Sunday, there were dueling car caravans for Trump supporters and the former vice president’s “Ridin’ with Biden” events.

WHAT WE’RE TALKING ABOUT

Trump’s Cuban edge: According to polls, Trump has been more competitive in South Florida than four years ago, due largely to his consolidation of conservative-leaning Cuban Americans, especially those younger and newly registered. That has strengthened Trump’s standing in Miami-Dade County, where polls show the president still trails Biden but has narrowed the gap significantly.

NPA wildcards: Republicans have nearly closed the gap in registration this cycle with Democrats, but voters who don’t register with a party will be crucial — not only for the race for president but many down-ballot contests. One key example is House District 118, a true swing district that has rocked like a pendulum nearly every two years for the past several cycles. Rep. Anthony Rodriguez, a Republican, faces challenger Ricky Junquera, a Democrat, but the voter registration numbers show 3,000 more Republicans voters than Democrats. What makes this district still swing? One third of the district —34,000 voters —have registered as no party affiliation and they remain the wildcard.

Distancing on health care: One sure sign that Republicans think the president is in trouble in Florida will be how they approach controversial issues he’s embraced, such as the border wall or the repeal of Obamacare.

Two examples are Republican U.S. House candidates Carlos Gimenez and Maria Elvira Salazar. Despite years of GOP efforts to repeal the landmark health care law, they both say they don’t want to dismantle the law that has enabled 200,000 residents of Miami-Dade County and the Florida Keys to enroll in health insurance.

Trailing in fundraising: By the way, both Gimenez, the Miami-Dade County mayor who is challenging Democratic Rep Debbie Mucarsel-Powell, and Salazar, who is trailing Democratic Rep. Donna Shalala, have less cash on hand than their opponents.

Not all Cubans with Trump: Miami developer Jorge Pérez — the namesake of the art museum where Trump appeared Thursday night for his televised town hall — may have developed Trump-branded condo towers and considered the president a friend, but he has joined a bi-partisan group of Cuban-Americans now working to defeat Trump.

Felons in voting trap: Last week we learned how Florida has put felons who have served their time in a new Catch-22. State elections officials told county supervisors they will start the process of removing felons who owe court fees or fines from the state’s voter roll — but not before Election Day. That’s because the prolonged legal challenge to a state law attempting to implement Amendment 4 delayed attempts to update the voting rolls and it is now too late to remove anyone from the state’s election list.

But, according to an analysis by the Herald/Times and ProPublica, while the court case was playing out, at least 31,400 felons registered to vote. Thousands of them are likely ineligible now because they owe court debts the court said they must pay, but many of them may not be aware that they cannot vote. Here’s the catch: If they vote, their votes not only could be declared ineligible and result in a legal challenge, the former felons could be charged with a crime.

900,000 disenfranchised: How many formerly incarcerated Floridians are ineligible to vote despite passage of the 2018 constitutional amendment? The Sentencing Project last week released a report that shows that 900,000 Floridians with felony convictions are unable to vote because of a law signed by Gov. Ron DeSantis last year that required them to pay all court fees, fines or restitution before voting.

The amendment asks voters to open state and legislative races to voters regardless of party affiliation, forcing candidates to appeal to a broader constituency beginning in 2024. The system would weaken party control, but the legislators suggest the real problem is Black candidates running in the state’s current legislative districts could be disadvantaged if white candidates run against them in their primaries. Those districts, however, will be redrawn by the next election.

Source those mailers: We know that amid the political mailers and emails you receive is a near constant stream of false content and misleading information. That’s why reporters at the Miami Herald have been going through some of the ads to figure out what’s true, what’s not, and who pays for it all.

COVID testing: The state has stopped paying for staff COVID tests at assisted living facilities and now many facilities are asking their insurance companies to pick up that tab. But it’s not happening. So what does that mean for the governor’s claim that the state has made protecting elders its top priority?

High school dilemma: Many Florida high school seniors are facing a pandemic-induced hurdle as they prepare to apply to college: They’ve not been able to take the required standardized tests. But despite school disruptions and limited tests, Florida education officials refuse to waive standardized testing requirement for 2021 applicants.

More transparency breaches: For several days over the last two weeks, the Department of Business and Professional Regulation experienced a widespread outage of its email and online web services. DBPR Secretary Halsey Beshears said malicious activity had been detected and led to online service outages. The agency disclosed the investigation on Friday, only after the Herald/Times asked the agency about the attack. Employees also have raised concerns about not being told and whether their information had been compromised.

Curtains for curfew: Miami-Dade County’s COVID curfew for the nightlife industry first was extended to midnight last week, and then was ended by a lawsuit. A court victory by the Tootsies strip club killed the measure last weekend. County lawyers have asked an appeals court to revive the measure but, meanwhile, the mayor said it wouldn’t be enforced.

The Case For Investing In African Telecoms

Mon Oct 19 , 2020
Rapid advances in technology, connectivity and telecommunications are conspiring to make Africa’s large, rapidly growing population a valuable asset for the automation revolution. It is imperative that Africa quickly develop agency in data and artificial intelligence and it will be lucrative for investors who support them by financing Africa’s telecom […] 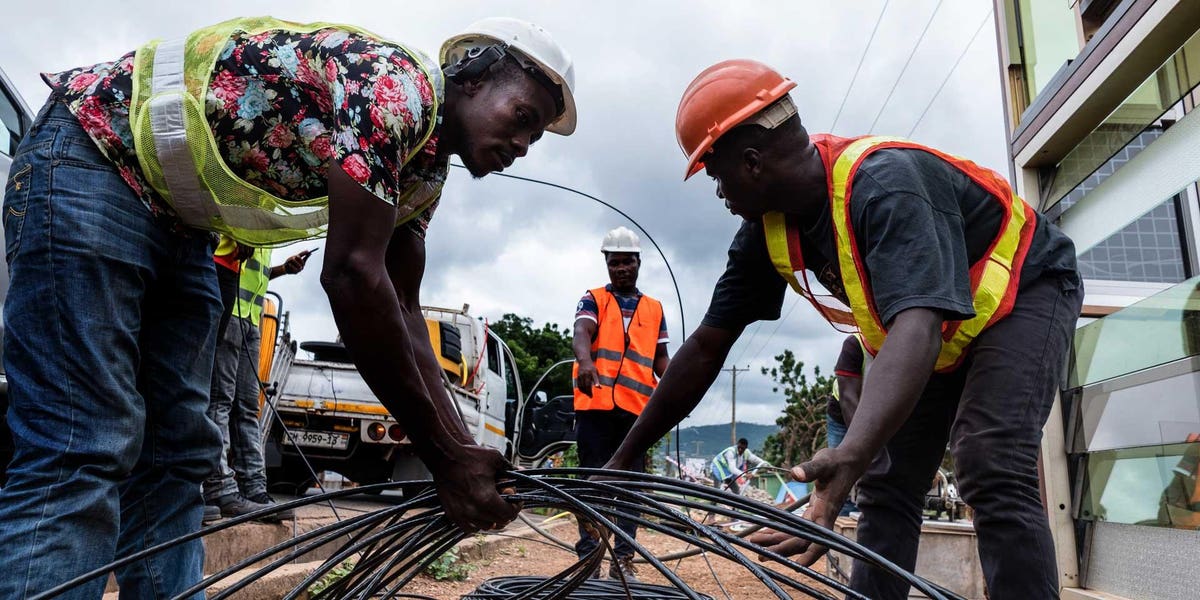