Novi — President Donald Trump’s son Eric is scheduled to make a Tuesday morning appearance at the Suburban Collection Showplace for a Make America Great Again event. Eric Trump’s visit to Novi follows the abrupt cancellation of a stop that had been planned for a New Hudson gun shop. The business owner […]

Eric Trump’s visit to Novi follows the abrupt cancellation of a stop that had been planned for a New Hudson gun shop. The business owner made the decision Monday after realizing that a man briefly employed there was arrested as part of the alleged plot to kidnap Gov. Gretchen Whitmer.

Ed Swadish, owner of Huron Valley Guns, told The Detroit News the person in question worked for him for about three weeks beginning in February. The business “cut him loose” after noticing behaviors that other employees weren’t comfortable with, including the person wearing tactical gear on one occasion, Swadish said.

“The governor would have had a field day against the Trump campaign,” Huron Valley Guns said in a Monday Facebook post. “They would accuse the administration of sending his son to a facility where terrorists work and train.

“This could not be further from the truth, but imagine the left spin.”

On the advice of his lawyer, Swadish wouldn’t identify the person but said the individual worked on the gun range.

Federal agents revealed Thursday that they arrested 13 people and thwarted a plot to violently overthrow the government as well as kidnap and harm Whitmer.

Outside the showplace, a couple hundred supporters lined the sidewalk early Tuesday waiting to gain access to a second-floor ballroom. Most were outfitted in Trump campaign shirts and baseball caps or wearing American flag scarves.

Tuesday’s rally was the first for Sarah and Ryan Alman of Fenton. The pair said they back the president and his policies and believe he’s earned a second term.

“If anything, from 2016 I think he’s garnered more support. I love everything about him. His tweets and rhetoric and everything. He’s changing Washington for the better in my opinion,” said Ryan Alman, 28, a janitorial manager. “He’s shaking up the world right now.”

“I don’t think there will be any issues,” added Sarah Alman, 26, of Trump’s reelection chances.

Ryan Alman said Trump’s Democratic challenger, former vice president Joe Biden, is like other politicians who will “do anything to get your vote.”

“I think he’s doing a lot of that,” he said. “I think he doesn’t want to say a lot of things to lose his base. I don’t know how much of a base he really has.”

“This is going to be a very historical election in terms of the livelihood of America and our democracy,” he said.

Szews’ father, John Szews, an Air Force veteran, said the climate in the country is so divisive that the presidential candidates can’t even go to a debate and shake hands and “the left seems like it’s our way or the highway.”

“It seems like we continue to move further and further to the center to appease the left,” he said.

He argued the coronavirus is being used as a “political weapon” to deflect from the real issues.

“The Trump campaign is being condemned because we’re not all masked up. Well, it’s our God-given right if we want to get sick or not,” he said. “I’ve done a lot of research on the ‘science’ of this and the politicization of this and I feel like we’re extremely informed.”

Oakland County Democratic Party Chair Vaughn Derderian in a Tuesday statement provided by the state’s Democratic Party over the relocated event said “no matter where Eric Trump goes in our state, he can’t escape his father’s broken promises and failed leadership.”

“Whether he’s at a gun range or a convention center, Eric Trump will spin lies about this administration’s disastrous record,” Derderian said in the statement. “Here’s the truth: Donald Trump’s failed COVID-19 response has devastated our state, leaving almost 7,000 dead in our state and sending unemployment skyrocketing.”

The Republican president prevailed in Michigan in 2016 by 10,704 votes.

Biden, traveled to Ohio on Monday and Doug Emhoff, the husband of vice presidential candidate Kamala Harris, made several stops in Michigan.

The Nov. 3 general election is the state’s first presidential election in which residents can vote early with an absentee ballot after no-reason absentee voting was legalized in 2018.

For subscribers: See where Michigan absentee ballot requests are greatest

Michigan Secretary of State Jocelyn Benson said last week that the number of absentee ballots requested for the November election ballooned to nearly 2.7 million, or more than three times the requests in 2016.

Tue Oct 13 , 2020
The British government on Tuesday insisted it is still “guided by science” following criticism that senior ministers had ignored the advice of experts three weeks ago for tougher restrictions to cut rising coronavirus infections. Health Secretary Matt Hancock told lawmakers the government had not acted on most elements of a […] 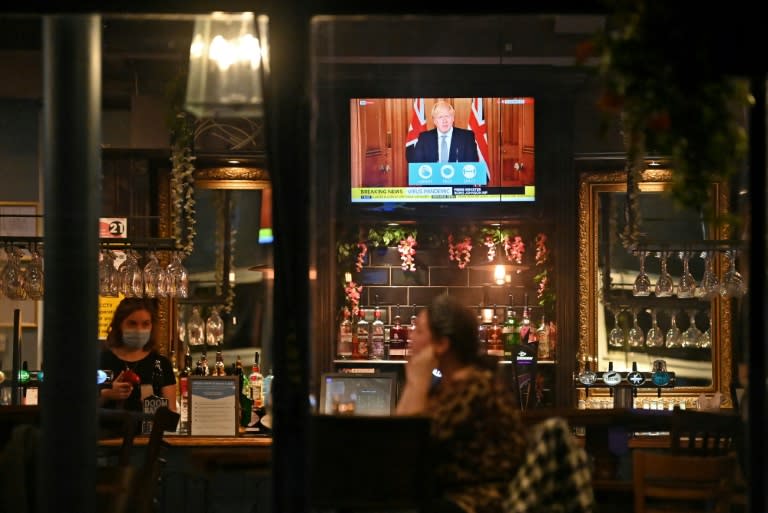