Playa de Formentor, Mallorca, Spain: istock As countries around the globe tentatively begin to relax restrictions on travel, the promise of tapas al fresco and long, lazy sun-filled days beside the sea come top of the travel wish-list for many tourists. Spain has long topped the list as one of […]

As countries around the globe tentatively begin to relax restrictions on travel, the promise of tapas al fresco and long, lazy sun-filled days beside the sea come top of the travel wish-list for many tourists.

Spain has long topped the list as one of the UK’s favourite holiday destinations, with more than 18 million British tourists visiting in 2019 – a fifth of the country’s overall total of nearly 84 million visitors, according to figures from the National Institute of Statistics.

But can British holidaymakers get there? And will we be welcome if we do?

Here’s all the information you need to know.

Am I allowed to travel to Spain from the UK?

At the moment, the Foreign Office is advising against all non-essential international travel – including to Spain.

The ban was initially put in place to avoid Britons getting stuck abroad as flight routes shut down; now that airlines are looking to restart summer flying programmes, this could change.

The FCO says its advice is under “constant review”.

The ban doesn’t make travel abroad “illegal” as such – but it does invalidate your travel insurance and means you may find it tricky to get help from the embassy or consulate if things go wrong.

Spain has announced that the State of Emergency declared on 14 March will end on 21 June. From this date, Spain will re-open its borders to European Union and Schengen-area countries (excluding Portugal) – including travellers from the UK.

How could I get there?

The quickest and easiest way to reach Spain is by air. Budget airlines such as Ryanair and easyJet have announced plans to resume flights – and there are some excellent deals to be had. We found a good selection of Ryanair flights to Barcelona, Seville, Malaga and Palma for just £10 in July, for example. Elsewhere, easyJet, which plans to resume 50 per cent of its routes in July, has launched a summer sale with flights from the UK to Spain for under £20, while British Airways aims to resume 50 per cent of its flights to Spain from July.

Reluctant fliers may be able to opt for a slower way of travelling: the train. Eurostar is currently running one service a day, departing London St Pancras at 10.24am and arriving in Paris Gare du Nord at 1.49pm. Prior to the pandemic, travellers could choose from a range of onward services on 200mph trains across the border into Spain, with a journey time of around 6 hours and 30 minutes from the French capital.

Pre-lockdown, Brittany Ferries operated three services a week, departing Portsmouth or Plymouth to Santander and Bilbao. Passenger services are currently suspended until 28 June, although this may change.

The Eurotunnel is still open for you to drive from Folkestone to Calais, subject to the completion of an online form and health declaration.

Will they let me in when I arrive?

From 21 June, UK travellers will be allowed to enter Spain. This includes the Canary Islands and the Balearic Islands (Mallorca, Menorca, Ibiza and Formentera). Providing you don’t have coronavirus symptoms, there should be nothing stopping you from being permitted entry.

Will I have to quarantine when I arrive?

Possibly. Spain’s foreign minister Arancha González Laya said Spain was considering introducing quarantine measures for UK tourists after the country re-opens to international visitors on 21 June. This is in response to the UK’s blanket 14-day quarantine on all incoming arrivals from 8 June.

“We will be checking what the UK will be doing and we will be in dialogue with the UK to see whether or not we should be introducing reciprocity as they have different measures than the rest of the EU,” she told the BBC’s HARDtalk programme.

She added the situation was “fluid” and said officials would like to “properly engage in a dialogue with the UK authorities to make sure that we both take the message that best corresponds to the health situation, which today is a little bit better in Spain than it is in the UK”.

“Hopefully by the time we open our borders, the UK would have moved forward also,” she said.

Chancellor Rishi Sunak said on Sunday that the UK would review its quarantine measures for foreign visitors on 29 June, adding that the government was “looking at all options”, including the opening of travel corridors with other countries.

Such ‘bridges’ would allow Brits to skip quarantine when returning to the UK and isolation requirements in selected countries.

Can I travel within Spain?

Yes, once the two-week quarantine currently being floated is up, British travellers should be free to move throughout the territory and travel between provinces.

Hotels and campsites were permitted to reopen in mid-May, with the Foreign and Commonwealth Office (FCO) stating that “some restrictions” were in place, such as limited or no access to communal facilities. Low demand meant many remained shut, but this has started to change, with plenty of empty rooms available. The FCO advises travellers to contact their accommodation provider prior to booking for further information on possible restrictions.

Are restaurants, shops and attractions open?

Spanish prime minister Pedro Sánchez announced his plans to transition the country towards a “new normality” at the end of April. Currently, this is taking place over four phases and differs from region to region.

Around 78 per cent of regions have now moved into phase three, with the exception of Madrid – one of the hardest hit areas – Salamanca, Segovia, Ávila and Soria in Castilla y León, which currently remain in phase two.

At phase three, bars can open inside with a maximum capacity of 50 per cent, a number which changes to 75 per cent on bar and restaurant terraces.

The number of people allowed to meet socially has risen to 20 people and groups sports, including exercise classes, can be practised between up to 20 people.

Tour groups can resume guided tours with up to 20 people and casinos can open with a reduced capacity of 50 per cent and a maximum of 50 people.

Cinemas, theatres and concert halls can all open but with 50 per cent occupancy and a chair’s space between each person not from the same household, with up to 80 people indoors and 200 people outdoors.

Museums and exhibition spaces can welcome 50 per cent of the usual capacity.

Beaches re-opened across Spain on 1 June, but local authorities are taking measures to ensure social distancing and hygiene regulations are observed.

Major attractions such as the Mezquita-Catedral in Cordoba, the Alcazar in Seville and Bilbao’s Guggenheim museum have re-opened to the public, with Granada’s Alhambra Palace following on 17 June.

All non-essential shops were allowed to re-open in Spain on 4 May, with indoor malls and department stores following on 8 June. Similarly to the UK, restrictions on the number of customers in a store at any given time are in place, alongside a social distancing rule of two metres.

The Spanish government has decided that regional authorities will be given the responsibility for deciding when their provinces can transition from phase three to the “new normal”.

Most of the above restrictions are expected to lift on 21 June when the “new normal” is anticipated to commence.

What rules are in place?

People aged six years or over are required to use face masks outdoors, on public transport and in enclosed spaces. Failure to comply could result in a fine of up to €100. Exceptions are made for those with disabilities or respiratory illness, as well as when eating or playing sport.

Yes. When you arrive back on UK soil, you’ll currently have two weeks of mandatory quarantine to look forward to.

The policy was implemented on 8 June and is in place indefinitely, but subject to regular review (the first one is on 29 June).

The UK quarantine is “compulsory”, which means you could be contacted at random to ensure you understand the requirements and are self-isolating.

Officials can telephone or call at the nominated address at any time during the 14 days and fine you £1,000 (in England and Wales) if you’re out without a valid excuse.

Quarantinees cannot go to work, school or to any public areas, or use public transport or taxis. They can’t have visitors, should not go out to buy food or other essentials “where you can rely on others,” and should also avoid contact with the people they’re staying with.

It’s a high price to pay for a Spanish getaway.

How safe is it to travel by plane, train or cruise liner?

Thu Jun 18 , 2020
This year’s Juneteenth holiday, which is on Friday, may be the most celebrated in decades. Amid the backdrop of more than two weeks of nationwide protests against police brutality and racism after the death of George Floyd, major companies and organizations have rushed to recognize Juneteenth as a holiday for their employees or […] 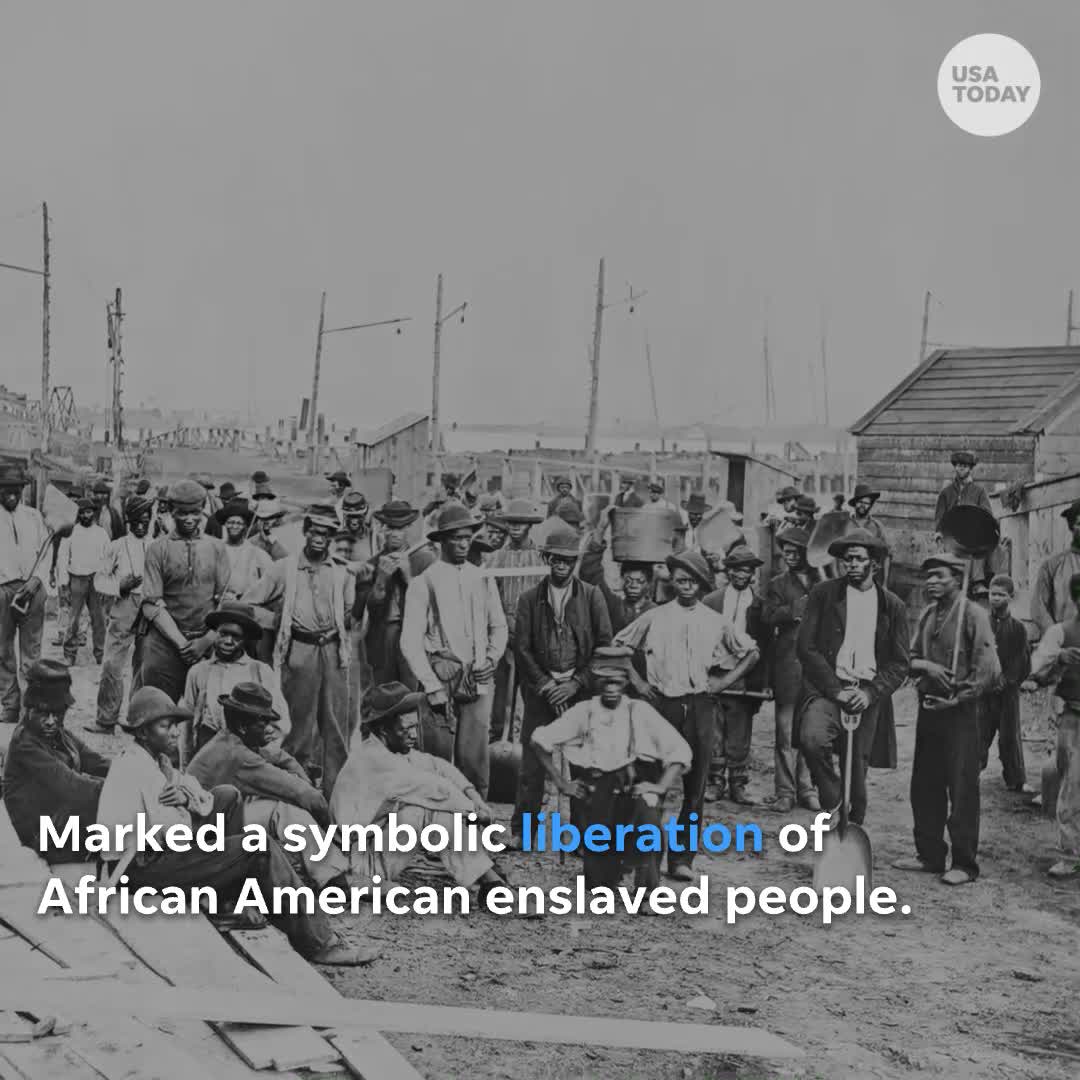