(Bloomberg) — Anthony Fauci, the U.S.’s top infectious disease expert, named seven states most at risk of a jump in Covid-19 cases if they fail to take precautions over the Labor Day weekend. In Europe, fresh signs emerged that an economic rebound is flagging. Thailand reported its first locally transmitted […]

(Bloomberg) — Anthony Fauci, the U.S.’s top infectious disease expert, named seven states most at risk of a jump in Covid-19 cases if they fail to take precautions over the Labor Day weekend. In Europe, fresh signs emerged that an economic rebound is flagging.

Thailand reported its first locally transmitted case after a streak of 100 days without community infection, while India performed a record 1.17 million daily tests after the government faced criticism that it wasn’t doing enough to map the outbreak. Israel proposed a lockdown on 600,000 people in the areas hardest hit by the virus.

Sanofi and GlaxoSmithKline Plc administered their experimental vaccines to patients for the first time in preparation for late-stage trials before year-end.

Israel Proposes Lockdown for Over Half a Million People (10:43 a.m. NY)

An Israeli cabinet subcommittee has voted to impose a lockdown on 30 towns and neighborhoods that are suffering from the highest coronavirus infections rates, Israel’s public broadcaster Kan reported.

Under the lockdown, businesses and most schools will be closed and residents will be required to remain within 500 meters of their homes, the radio and TV broadcaster said.

The lockdown, which is subject to review by a parliamentary committee, will cover some 600,000 people, Kan said. The towns on the list are mainly made up of Arab and ultra-Orthodox residents.

New York Governor Andrew Cuomo said malls and casinos can open Sept. 9 if they have enhanced air filtration systems. Casino occupancy will be limited to 25%, while malls must keep occupancy to 50%, he said Wednesday.

No table games or beverage service will be allowed on casino gaming floors, Cuomo said on a conference call with reporters.

Cuomo said he agreed that indoor dining at restaurants should be reopened but was concerned about ensuring compliance with social distance and mask rules.

“I have besieged New York City to do a better job on compliance and enforcement,” he said. “Look, if New York City can say this many police, NYPD, can be put on a task force to monitor the compliance that’s something that we can discuss.”

Miami-Dade Schools Police arrested a 16-year-old student Thursday in connection with cyber attacks against the public school district that have caused chaos in the first week of online learning.

Miami-Dade County Public Schools, one of the largest districts in the country, said it is working with the Federal Bureau of Investigation, Secret Service and the Florida Department of Law Enforcement, according to a statement posted on its website.

The district said the student orchestrated attacks designed to overwhelm its networks. Like many parts of Florida, Miami-Dade started the school year this week online over concerns about Covid-19 in south Florida.

Nearly two-thirds of New York state restaurants said in a survey that they are likely to close by year end without government support. Of those that expect to close, 55% foresee it happening before November, according to a survey of more than 1,000 restaurant owners across the state.

The New York State Restaurant Association is lobbying state and federal government for commercial rent relief, payment of business interruption insurance claims, the resumption of indoor dining in New York City and an increase in the capacity for inside restaurants in other parts of the state.

Scotland’s First Minister Nicola Sturgeon warned the coronavirus is spreading again, as her government struggles to balance protecting health with the need to kickstart the economy.

She told reporters on Thursday that the so-called R-number, or reproduction rate, is “probably above 1, perhaps as high as 1.4,” meaning transmission is increasing. Still, she said the overall prevalence of the virus remains low.

Fauci said that seven states that have seen upticks in Covid-19 cases should be particularly vigilant over Labor Day, and warned that if Americans are “careless” there could be another jump in cases this fall.

“There are several states that are at risk for surging, namely North Dakota, South Dakota, Iowa, Arkansas, Missouri, Indiana, Illinois,” Fauci, the director of the National Institute of Allergy and Infectious Diseases, said in an interview this week. “Those states are starting to see an increase in the percent positive of their testing; that is generally predictive that there’s going to be a problem.”

Thailand detected its first locally transmitted Covid-19 case since late May, snapping a streak of 100 days without community infection.

The new case on Thursday was confirmed in an inmate of a prison in Bangkok shortly after the incarceration. The patient’s history showed that he stayed with his family of five before being lodged in jail, health ministry officials said in Bangkok. There was no immediate risk of transmission among the prison population because all new inmates are quarantined for a 14-day period, they said.

A gauge of default risk for European investment-grade firms dropped to below 50 basis points for the first time since Feb. 24, and is heading for its biggest weekly tightening in three weeks. A similar measure for junk-rated firms is also near its lowest levels since early March.

Spending by governments and aggressive central bank action around the world have buoyed credit markets since they crashed in March.

Norway has decided to ban sea cruises to Svalbard in order to limit the Arctic archipelago’s exposure to potential Covid-19 contagion.

The new restrictions will last until Nov. 1 initially, and make an exception for day cruises starting and ending on Svalbard with vessels carrying a maximum of 30 people, the government said on its website on Thursday.

Uganda will reopen medical schools later this month to boost staffing at health facilities. Authorities will allow final-year students to return and enroll for internships as the term of the current pool of trainees expires, according to National Council of Higher Education spokesman Saul Waigolo.

The East African nation’s cases more than doubled to 3,112 in less than a month. Health facilities in the capital, Kampala, have run out of beds and authorities are rushing to expand a treatment center that will be able to take 2,000 people, according to the New Vision newspaper.

Initial results from Hong Kong’s universal testing blitz have uncovered six infections, in the first indication the experiment will bring to the fore cases even with only a small segment of the population participating.

The new asymptomatic infections emerged after 128,000 people were sampled in the first few days of a Beijing-backed campaign to offer everyone in the city a free test. About 850,000 residents had registered for it as of Thursday afternoon, trailing behind the 3 million turnout hoped for by the lab running the project.

Indonesia posted a record number of new coronavirus cases on Thursday, eclipsing the previous record of a week ago.

There were 3,622 fresh cases reported over the past 24 hours through midday of Sept. 3, taking the total to 184,268, the National Disaster Management Agency said. The number of deaths also surged on Thursday, with 134 people succumbing to the disease, the second-highest since the outbreak began.

The number of confirmed infections has picked up as many Indonesians traveled around the country during public holidays two weeks ago to mark the independence day.

The number of confirmed Covid-19 cases in Myanmar topped 1,000 after a surge in recent weeks. The virus now threatens to spread in one of southeast Asia’s poorest countries after months in which it averaged less than 10 new infections a day.

India conducted a record 1.17 million tests in the past 24 hours, the government said in a statement Thursday, taking the total number to more than 45.5 million so far. The increase follows longstanding criticism that India was not testing enough to map the true extent of the outbreak.

India is battling the third-largest outbreak in the world as the virus spreads deeper into its rural hinterland. India reported 83,883 new cases Thursday, pushing the total to 3.85 million.

The incidence of new cases in the two-week period of August 17–30 was 5.8 per 100,000 inhabitants. That compares with 6.0 per 100,000 in the preceding two weeks, the Ministry of Social Affairs and Health said in a statement.

Finland has had a total of under 8,200 confirmed cases of the coronavirus and 335 related casualties to date.

The euro area’s recovery ran out of steam midway through the third quarter, with gauges of activity pointing to contractions in Italy and Spain.

While manufacturing output rose markedly in August, the larger services sector saw only marginal growth, according to an IHS Markit report. Orders increased at a slower pace, job cuts continued and confidence about the outlook eased.

South Korea conducted about 19,000 daily virus tests between Aug. 21 and Sept. 3, more than double the pace of the previous two weeks, according to the deputy director of Korea Centers for Disease Control and Prevention.

Over the past three days, the country has carried out more than 20,000 tests a day, Kwon Jun-wook said at a briefing. Kwon said tighter social distancing rules have “clearly” helped bring down the pace of new infections, a trend that’s likely to continue after the coming weekend.

Sanofi launched human studies for its Covid-19 vaccine at 11 sites across the U.S. The phase 1/2 trial — which compresses the early and middle stages of clinical tests — will assess 440 healthy patients in two age groups: 18 to 49, and over 50. It aims to have results by December and then accelerate into late-stage trials.

The vaccine candidate relies on technology Sanofi uses to make influenza shots and Glaxo’s adjuvants, which enhance the body’s immune response. Sanofi also has a messenger RNA vaccine in development.

Emmanuel Macron’s government unveiled the long-awaited 100 billion-euro ($118 billion) stimulus plan the French president is betting on to transform the economy.

The plan, dubbed “France Relaunch,” includes wage subsidies, tax cuts for businesses and funding for environmental projects. The French economy was among the worst hit in Europe by lockdowns, and the initial rebound appears to be tapering off.

Hancock is concerned that the outbreaks in other European countries could herald a more serious Covid-19 situation in Britain, according to the FT. One worry is that younger people, many of whom are asymptomatic, could pass the virus on to older, more vulnerable family members, the report said.

Australia’s Victoria state premier, Daniel Andrews, told reporters that while the restrictions were tough, moving too fast would see the state lose its hard-won gains.

The U.K. government committed 500 million pounds ($665 million) for the carrying out of Covid-19 test trials and capacity expansion, the Health and Social Care Secretary announced.

The U.S. Centers for Disease Control and Prevention has told states to prepare for a Covid-19 vaccine to be ready by Nov. 1 and asked them to remove obstacles that would prevent distribution sites from opening.

The CDC in early August told states to assume for planning that “limited doses” of a vaccine could be available in fall. The new Aug. 27 letter, first reported by the news organization McClatchy, sets the stage for a broader rollout. A CDC spokesman confirmed the contents of the letter.

The date suggests the federal government is preparing for a vaccine to become available just days before President Donald Trump stands for re-election Nov. 3, an aggressive goal that would depend on shots being tested and reviewed by then. Trump’s political future hinges on the response to the virus that has killed almost 185,000 Americans.

Nervous about seeing 'Tenet' during COVID? These moviegoers are first in line

Thu Sep 3 , 2020
John David Washington in “Tenet.” (Warner Bros.) As the pandemic continues, plenty of moviegoers remain nervous about returning to the cinema. Not Pat Egan. As soon as his local AMC opened Aug. 20, the 31-year-old Philadelphia radio producer grabbed his mask and bottle of hand sanitizer and went out for […] 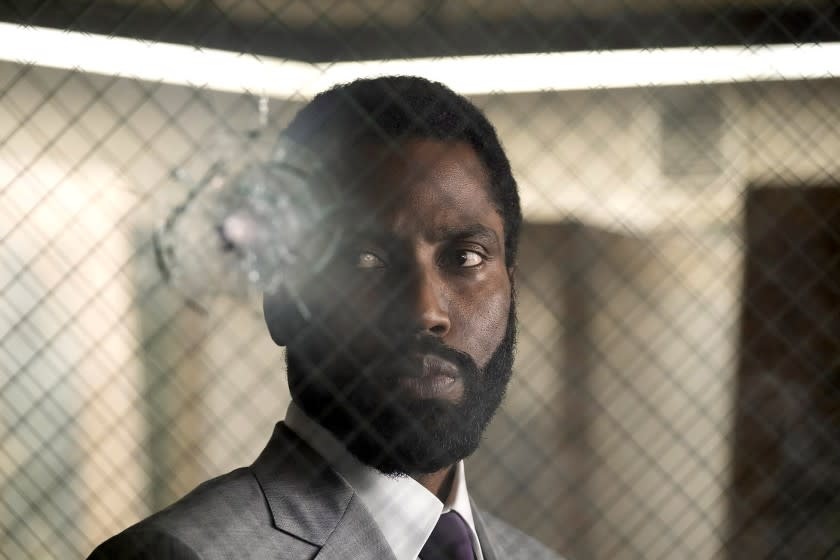