Conservative political strategist Stephen K. Bannon, the architect of President Donald Trump’s victorious 2016 campaign, was arrested Thursday on a mega-yacht and charged with plundering a fund set up to privately finance construction of Trump’s border wall. Three others were arrested elsewhere. In large part, it is a made-in-Florida scandal. […]

Conservative political strategist Stephen K. Bannon, the architect of President Donald Trump’s victorious 2016 campaign, was arrested Thursday on a mega-yacht and charged with plundering a fund set up to privately finance construction of Trump’s border wall. Three others were arrested elsewhere.

In large part, it is a made-in-Florida scandal. Two Florida businessmen — one of them with a history of bankruptcies and liens — were among the four rounded up by the feds. Those two had first appearances in separate Florida courtrooms later in the day. The company used to run the fundraising effort was registered in Florida

An unsealed indictment announced by the Justice Department accused Bannon and three others of fleecing hundreds of thousands of donors in an online crowdfunding campaign called “We Build the Wall” that raised more than $25 million and was promoted by Donald Trump Jr.

Bannon and associates had assured donors that they wouldn’t receive any money in a volunteer effort.

“Those representations were false,” the Justice Department said in a statement from the acting U.S. attorney for the Southern District of New York, Audrey Strauss. The four allegedly used a shell company and fake invoices to skim more than $1 million from donations.

The Justice Department wasn’t the only agency looking into “We Build the Wall Inc.” Florida Agriculture Commissioner Nikki Fried had initiated an inquiry in June 2019.

Fried’s office took interest in the nonprofit in response to consumer complaints and complaints referred to the agency by Florida’s Office of the Attorney General, including allegations of questionable use of collected funds, the organization only having one director on its board instead of the required three, and filing false statements about the board.

The two Floridians facing magistrate hearings on Thursday were Brian Kolfage, of the Panhandle’s Miramar Beach, who ran the “We Build the Wall” group and is alleged to have pocketed more than $350,000 to fund a lavish lifestyle, and Andrew M. Badolato, a Sarasota-area venture capitalist long tied to Bannon.

Kolfage is alleged to have used the funds to pay for home renovations, make payments on a boat, and purchase a luxury sports utility vehicle, cosmetic surgery and to pay off credit card debt and personal tax liabilities.

Kolfage incorporated WEBUILDTHEWALL, INC. in Florida on Dec. 28 2018, according to state records. Kolfage, another Florida man named Dustin Stockton and Kris Kobach, the former Kansas secretary of state and unsuccessful GOP nominee for governor, were all listed as directors of the organization in a 2019 filing with the Florida Department of Agriculture and Consumer Services.

The group later told the department that it took in $30 million in revenue in 2019 and spent $21 million on administrative expenses, leaving it with a $9 million surplus.

Kolfage associate Stockton is also, according to his LinkedIn profile, a vice president of America First Medical, a firm formed by Kolfage a few months ago that has been criticized for selling masks that were in short supply when COVID-19 first broke out. Prosecutors Thursday asked for funds held by America First at two banks to be forfeited in connection with the Bannon case.

Stockton was a campaign strategist for Joe Arpaio, a former Arizona sheriff who this month lost a primary bid to recapture his old post. Arpaio became well known for his harsh treatment of immigrants and jail inmates, confining them in tents without air conditioning in Arizona’s torrid climate. Stockton is also a former reporter for the conservative news site Breitbart, which Bannon used to head, and took to Twitter to say he had been raided by a SWAT team Thursday morning with a warrant to search his phone.

Just got raided by SWAT serving a warrant for my phone out of SDNY. Reporters welcome to reach out. This is some serious bullshit

Kolfage, an Iraq war veteran and Purple Heart recipient, has also been accused by former employees of running fake news web sites and sued other veterans over online trolling that at least one veteran said was driven by his concerns that Kolfage had overstated his military experience.

The other alleged fraudster is Badolato, who has been involved in other ventures with Bannon and was charged alongside him on Thursday.

Timothy Shea, of Castle Rock, Colorado, was also arrested and charged with the same count of conspiracy. He is a Realtor and owner of a company called Winning Energy that sells pro-Trump beverages, its cans claiming to contain “12 oz of Liberal Tears.” A Colorado television channel begin investigating Shea in 2018 after noticing that the address listed on the GoFundMe page for the wall effort traced to a Castle Rock post office box.

Speaking to reporters at the White House, President Trump distanced himself from his former White House adviser and campaign strategist and said he didn’t know the Floridians. He also said he’d long opposed privately funding the wall along the U.S.-Mexico border, a key campaign promise of his administration.

“When I read about it I didn’t like it. It sounded to me like showboating,” Trump said of the private effort to build the wall, adding that “I thought this was going to be an inferior wall.”

Of the co-indicted Florida men, Trump said, “I didn’t know of any of the other people either. … I don’t believe I ever met them.”

However, in a photo posted on his Facebook on Feb. 24, 2019, Kolfage — a triple amputee wounded in Iraq in 2004 — poses with his wife, Ashley, alongside Eric Trump at the president’s Mar-a-Lago resort. A few months earlier, Ashley posted a picture on Instagram of the family with their two young children at the White House on Christmas Day.

In November 2019, Brian Kolfage posted an Instagram photo with Ashley at the Sandestin Golf and Beach Resort near their home, where they posed with Donald Trump Jr. Brian Kolfage wore a “We Build The Wall” golf shirt at what appeared to be a fundraiser for the nonprofit.

Multiple news reports said Bannon was arrested off the Connecticut coast aboard a 150-foot yacht called the Lady May, reportedly owned by Chinese self-exiled billionaire Guo Wenghui, wanted back in China for alleged money laundering. The Chinese fugitive has been a Mar-a-Lago member. Bannon was freed on $5 million bail.

Bannon’s arrest raises new questions about Attorney General William Barr’s abrupt sacking two months ago of Geoffrey Berman, the U.S. attorney for New York. He reportedly had been looking into Trump friend and lawyer Rudolph Giuliani and denied Barr’s initial claim that the prosecutor was stepping down on his own. Days later Berman was fired, launching a political firestorm. He later said he resisted until he was sure that Strauss would be his temporary replacement, allowing ongoing investigations to continue.

Badolato has a long public record of legal problems, including filings of Chapter 7 and Chapter 11 bankruptcies, and numerous large IRS tax liens. He and Bannon were board members of a pharmaceutical company called SinoFresh that nearly collapsed amid litigation between the parties.

Florida corporation records show Badolato has opened and closed numerous businesses and his personal website describes him as an accomplished entrepreneur, senior-level executive and venture capitalist.

A story by the Tampa Bay Times in March 2017 told of Bannon’s relationship with Badolato, the two men working on a film about Ronald Reagan. Later, Bannon opened a film company that shared Badolato’s office address to make a documentary about former GOP vice presidential candidate and ex-Alaska Gov. Sarah Palin.

On his personal website, Badolato touts his columns published in Breitbart, the arch-conservative news website, stating that his data articles have been picked up by Drudge Report, the popular conservative website. His articles, said the site, “amassed over 40 million page views, 100,000 plus comments and more than 250,000 social media shares. Mr Badolato’s data articles have appeared in the Drudge report 6 times.”

Appearing before a magistrate in Tampa Thursday afternoon, Badolato was released without a bond, assigned a public defender since he did not have an attorney.

“I am working on it now, your honor,” Badolato said, sporting a dark blue polo shirt and a medical mask, showing little emotion. He is scheduled to next appear before the court via Skype on Aug. 31, absent any bond requests from prosecutors in New York.

Outside the Tampa courtroom, his adult son Billy Badolato described how federal agents burst in with rifles pointed at the family around 7 a.m., and stayed more than three hours, seizing a passport and guns before leading his father away. Exiting the bond hearing, a somber Badolato did not answer questions from reporters but Billy earlier acknowledged that Bannon was an occasional visitor to the home.

The Sarasota Herald-Tribune reported in June 2018 that Badolato’s company USA Exchange Inc. was a creditor in the bankruptcy of Cambridge Analytica, the data firm close to Bannon that was accused of secretly harvesting Facebook profiles of millions of Americans in order to target political ads to them.

Kobach has not been charged and is not referenced in the indictment. Kobach, who campaigned unsuccessfully for governor in Kansas in 2018 and U.S. Senate in 2020, has served as the group’s general counsel since early 2019. He has also featured prominently in its fundraising videos.

He repeatedly touted his involvement with the group during his Senate race. He said as recently as July 6 that he was working with We Build the Wall.

“There’s a lot of legal work in that because not only am I negotiating with landowners where we’re going to build the next privately funded section of wall, I’m also talking to the Department of Homeland Security and making sure our specifications are consistent with theirs,” Kobach said.

We Build the Wall is one of seven clients that paid Kobach’s law firm $5,000 or more since January of 2019, according to the financial disclosure form he filed with the U.S. Senate in May. He was not required to list the exact amount he received from each client, but the total income from his firm was listed as $444,000 from January of 2019 to May of 2020.

Kobach did not answer a phone call Thursday morning. The charges against the organization come just weeks after Kobach lost the Republican Senate primary to Rep. Roger Marshall by double digits.

Bryan Lowry of the McClatchy Washington Bureau contributed to this report, as did Dan Sullivan of the Tampa Bay Times.

Here's what you actually need to make better cocktails at home

Fri Aug 21 , 2020
Here’s what you actually need to make better cocktails at home Remember bars? You know, those nighttime hangout spots where we’d stand shoulder-to-shoulder with our friends, as well as strangers, spending more money than we should on alcoholic beverages? Ah, yes. You truly don’t know what you’ve got until it’s […] 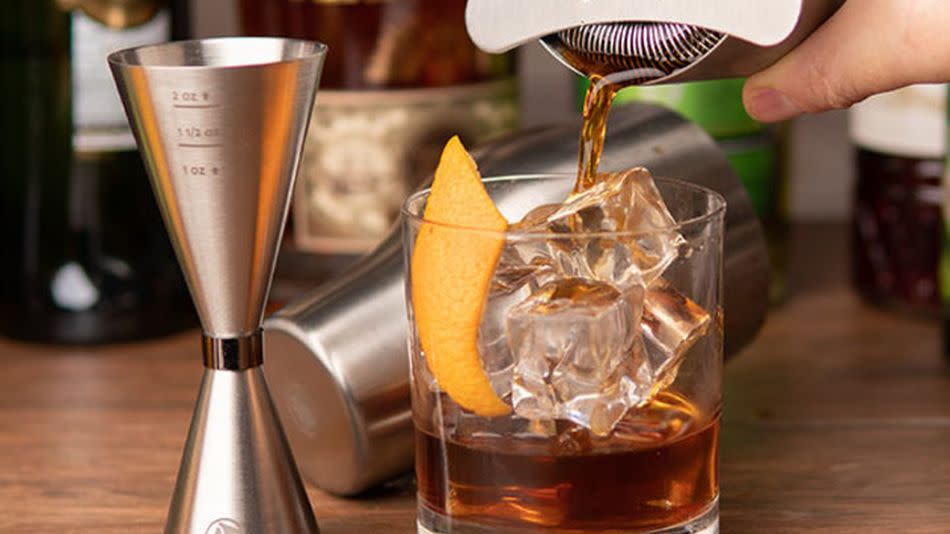