New York-based apparel brand Alex Mill, increasingly known for its modern, quality-driven take on classic wardrobe essentials, is using its playful new collection with comedian and “The Tonight Show” host Jimmy Fallon to test out a whole new category: pyjamas. The collection, trademarked P’Jimmies, is made up of cotton tops, […]

The collection, trademarked P’Jimmies, is made up of cotton tops, bottoms, socks, eye masks and even a jumpsuit and arrives on Alexmill.com and in the brand’s Soho store on Thursday. Net proceeds will go to Feeding America, a nationwide network of food banks and pantries that help the hungry.

While there isn’t a financial upside for either party, both sides still benefit. For Fallon, who launched sunglasses last year with Warby Parker, it’s a chance to make his personal mark on yet another product category — a brand-building exercise celebrities have been practising for years, but has picked up during the pandemic as filming has slowed.

“I come up with 100 ideas every day. Some ideas — most ideas — don’t really fit in the show,” Fallon told BoF in an email. “So I like to collaborate with people who are capable of making my ideas a reality.”

For Alex Mill, founded by Alex Drexler as a men’s shirting brand in 2012 then relaunched as a full line for both men and women in February 2019, access to Fallon’s audience — 18 million-plus followers on his personal Instagram, a million-plus people watching “The Tonight Show” every weeknight, plus video clips the next day — can’t be matched. (On top of that, Fallon gifted pyjamas to around 40 of his celebrity friends, who will likely wear them on their own channels.)

That kind of exposure is priceless for a small brand. While the business is financially backed by Millard “Mickey” Drexler, Alex’s father and former chief executive of both J.Crew and Gap, it’s run with a modest budget and a staff of under 20 people, with marketing making up less than 10 percent of the overall budget.

Taking a bet on something like P’Jimmies is not only worth it for the exposure, but also the opportunity to test and learn. Smaller companies can’t invest a ton of money on developing new styles or expanding into new categories, but the added benefits of partnering with a popular celebrity make it worthwhile.

“Pyjamas could be a fun business to own down the road,” Mickey Drexler said. “If we end up being in the pyjama business, then we’ll figure out the kind of relationship [Fallon and Alex Mill] have together.”

Since the relaunch, Alex Mill has been making these sorts of bets — some big, others small — in the hopes of building a digital-led business without the financial and operational resources that a corporation-backed — or venture-funded — brand would. In 2019, the then-tiny brand doubled its sales, and projects to do so again this year. (The Drexlers said they believe they would have potentially even turned a profit, if not for the pandemic.)

In an interview with BoF, the Drexlers and partner Somsack Sikhounmuong, the brand’s designer, shared some of the calculated risks they’ve taken since revamping the brand, explaining what’s worked, what hasn’t and why.

Bet: Physical retail is part of the future. Like many online-led retailers looking to gain market share through tactics that go beyond digital marketing, offline stores were always part of the Alex Mill plan. “We wanted to have a store that showed off our goods,” Mickey Drexler said.

Just four months after relaunch, the company opened a store on Greene Street in New York’s Soho neighbourhood — a popular strip with luxury brands, but too quiet for a label that was virtually unknown to the general public. Business was slow to pick up, although they did start to see some momentum by the end of the year.

However, the lease was temporary, so at the beginning of 2020, the team moved to Mercer Street, which attracts a lot more foot traffic from Broadway’s main stretch. For the first few weeks, “it took off like a rocket,” Mickey Drexler said. Then the pandemic hit, “and that was the end of that.”

Soon enough, the store was shuttered due to city-wide lockdowns. While business is on the up after the post-reopening slog many Manhattan retailers reported, the team is bracing for what new restrictions may come with coronavirus cases rising in the region once again. While the company was able to negotiate a deal on its rent in 2019, the cost was still a big financial hit. And yet, the plan is to stay in the space, with the understanding that the investment that has already been made — not only on rent but on store furnishings and experience — will pay off once a vaccine is widely distributed and consumers return to stores.

Bet: A little bit of wholesale makes sense. Unlike many “direct-to-consumer” brands, which often eschew traditional retail in order to avoid marking up their products, Alex Mill launched with several retail partners, and now maintains around 30 relationships with stores — from international players like Net-a-Porter to one-off concept shops like Los Angeles’ Mohawk General — that aren’t its own.

While Mickey Drexler’s experience was primarily in direct-to-consumer “speciality” retail, he’d worked with wholesalers before, and Alex Drexler built the first iteration of Alex Mill primarily through wholesale. But working with other retailers can be challenging: it’s hard to make money because many of these stores discount heavily, and often offer terms that are not beneficial to the brands.

Alex Mill has chosen to maintain these relationships for two primary reasons: it allows the brand to produce more inventory and keep cost-per-unit down, and it offers another avenue of marketing that is sometimes cheaper and more effective than traditional online customer acquisition. (A customer who shops at Nordstrom, for instance, might have never heard of Alex Mill even if she spends a ton of time online.)

“We like to think of it as strategic partnerships, and just like our site and our social channels, our partnerships are important to our success and growth,” said Alex Drexler, who added that the majority of their revenue still comes from direct sales. “We have long-standing relationships with some fantastic people — it’s a balance.”

Bet: Making email good is worth the extra effort. Every Tuesday, the Alex Mill team goes through the next week’s worth of emails and picks them apart, from the creative to the subject line. In bigger companies, this would be the responsibility of one team. Here, it’s everyone’s responsibility. For instance, November 16th′s newsletter promoting new hand-dyed cashmere sweaters — with the simple, straightforward title, “We Tie-Dyed Cashmere” — helped to sell through half of the the available inventory by midday.

Since the relaunch, monthly revenue from email has increased by more than five times.

“We put a lot of resources into creative and we find that resonates with email in a big way,” Alex Drexler said.

Bet: Slow, meaningful growth is better than fast, expensive growth. Mickey Drexler isn’t used to success taking a lot of time. (Within four years of launching Old Navy when he was chief executive of Gap, Inc., the store was generating more than $1 billion a year.) But he’s also fed up with the discounting culture and quality crisis that has overtaken traditional apparel retail, so he wants to do things differently with Alex Mill. That means not pouring tons of funds into it from the start. (He has not shared exactly how much money Drexler Ventures, his family office, has put into the business.)

This means that Alex Mill can’t grow as quickly as some of its competitors: there is less money to open additional stores, to spend on online marketing and to develop new products. So the company does things in a compact way. They spend more man-hours on perfecting messaging and testing out new concepts — like pyjamas — through partnerships that offer additional upside. They also keep inventory levels as low as possible without sacrificing low-ish prices: this way they’re not left with a ton of stock at the end of the season that needs to be discounted. It means that the brand may not get as much initial attention — or as many sales — as heavily funded labels, but the hope is that the growth is sustainable and long-lasting, rather than outrageous and fleeting.

“As long as we have enough to fund it ourselves … I don’t want a financial partner,” Mickey Drexler said. “I want to go at the appropriate speed of building a company.”

Bet: Irony is overrated. While many of today’s young, preppy-skewing brands are quite affected in tone, Alex Mill is earnest and straightforward, with an emphasis on good design and quality that makes the wearer look and feel better, even if they can’t pinpoint quite exactly why. The label has become a word-of-mouth favourite with snobby American fashion editors and buyers, but at the same time is aesthetically accessible to a mass audience.

A lot of that has to do with Sikhounmuong, whose positive attitude and relaxed designs have helped to position the brand — intentionally or not — as unpretentious and accessible without feeling generic.

“There’s a warmth to the brand, whether it’s in a literal sense —the handfeel, colours and washes — or in a more abstract sense — the familiarity of the pieces, the ease of the styling, the smiles of the models,” he said. “Life over the past several months has felt pretty unfamiliar and complicated, to say the least, and I want Alex Mill to be the exact opposite of that.”

Six Things to Know About Selling Clothes in a Tough Market

Thu Nov 19 , 2020
Top view of stressed young asian woman trying to find money to pay credit card debt. If you’ve piled on debt this year, you’re not alone. A recent survey conducted by Clever found that the average American has taken on an additional $7,512 in debt since this time last year, […] 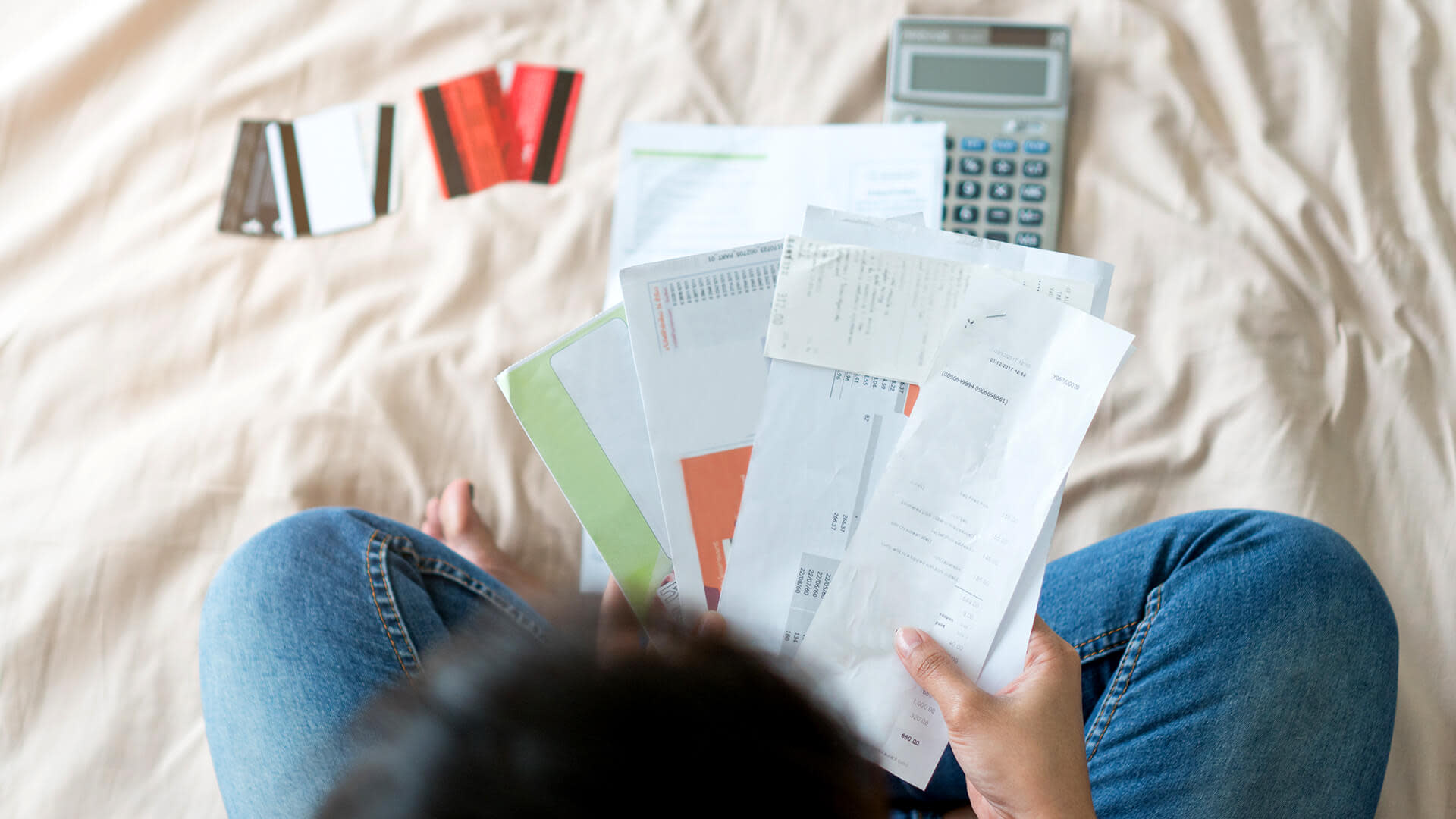