Photograph: Richard Drew/AP One of Fox host Tucker Carlson’s top writers has resigned after a CNN investigation found he was posting racist and sexist comments online under a pseudonym. Under the name “CharlesXII”, Blake Neff regularly posted offensive language on an online forum called AutoAdmit. In June, for example, Neff […]

One of Fox host Tucker Carlson’s top writers has resigned after a CNN investigation found he was posting racist and sexist comments online under a pseudonym.

In June, for example, Neff wrote, “Black doods staying inside playing Call of Duty is probably one of the biggest factors keeping crime down.” Neff also harassed a woman on the forum, posting information about her personal life and encouraging other users to post private information about her.

In an internal memo sent to staff, Fox News confirmed Neff is no longer with the broadcaster. “We want to make abundantly clear that Fox News Media strongly condemns this horrific racist, misogynistic and homophobic behavior,” read the memo. “Neff’s abhorrent conduct on this forum was never divulged to the show or the network until Friday, at which point we swiftly accepted his resignation.

Carlson has called Neff a “wonderful writer” and in an interview with Dartmouth’s alumni magazine, Neff said: “Anything [Carlson is] reading off the teleprompter, the first draft was written by me.”

Carlson has not commented directly on Neff’s resignation but Fox said he will address the topic in his show on Monday. On Friday, Carlson appeared to reference Neff’s departure when he attacked what he termed “cancel culture”.

Meanwhile, others pointed out more examples of controversial journalism from Neff under his own name.

Is Carlson going to pretend to have been unaware of his close associate’s posts? Is he going to defend his associate’s views as 1) defensible and 2) consistent with his own? Or is he going to try to save his own career by throwing his friend under the bus?https://t.co/qMV1OHiB8z

Carlson, one of Donald Trump’s favourite Fox News personalities, recently repeatedly targeted the Democratic senator and Iraq war veteran Tammy Duckworth, calling her a “coward” on Tuesday’s show after she called for a national discussion on the issue of removing US monuments and statues of historical figures who were leaders of the Confederacy or other hateful or dubious legacies.

Duckworth, a former navy helicopter pilot, lost her legs after her aircraft was hit by enemy fire in Iraq.

Sat Jul 11 , 2020
Tucker Carlson on the set of his show in New York in 2017. (Richard Drew / Associated Press) Blake Neff, a writer for “Tucker Carlson Tonight,” has resigned from the top-rated Fox News show amid reports he posted racist, sexist and homophobic comments to an online forum under a pseudonym. […] 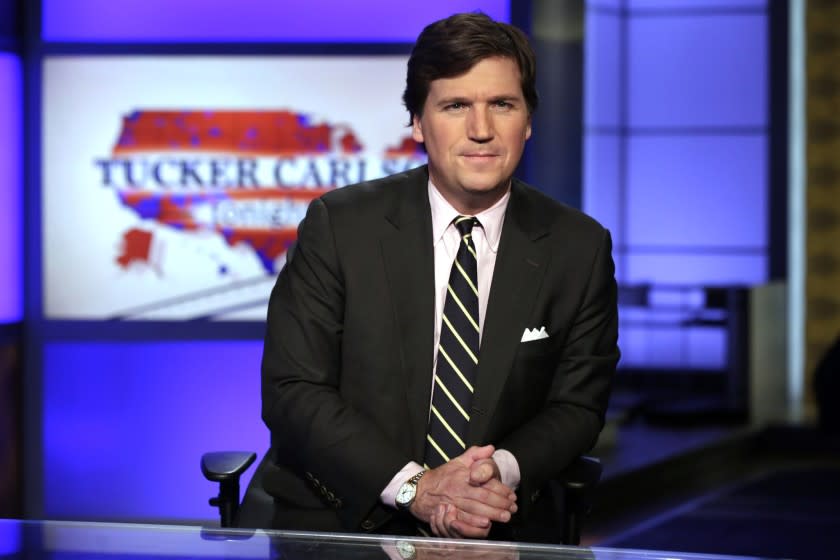