After 10 years of fighting the Affordable Care Act and against all evidence, Republicans are suddenly downplaying the threat that a Supreme Court case advanced by their own party could pose to the law. Their stated confidence in the future of Obamacare and its health care protections for millions of […]

After 10 years of fighting the Affordable Care Act and against all evidence, Republicans are suddenly downplaying the threat that a Supreme Court case advanced by their own party could pose to the law.

Their stated confidence in the future of Obamacare and its health care protections for millions of Americans comes as Democrats rail against Supreme Court nominee Amy Coney Barrett, pointing to her criticism of a past ruling that upheld the health care law as evidence that she would move to strike it down. The Supreme Court is set to hear the new case just days after the presidential election.

“No one believes the Supreme Court is going to strike down the Affordable Care Act,” Senate Majority Leader Mitch McConnell (R-Ky.), a longtime opponent of the ACA, said Monday in Kentucky’s Senate debate against Democrat Amy McGrath.

Appearing on Fox News, Sen. John Kennedy (R-La.) said that anyone worried about Barrett voting to strike down the law if she is confirmed, which looks all but certain prior to the Nov. 3 election, should “put down the bong.”

But some people clearly believe the Supreme Court might invalidate Obamacare — namely, the plaintiffs seeking to overturn it: 18 Republican state attorneys general and the Trump administration. If they didn’t think it’s at least possible that the court would agree with them, why would they litigate over the law at all?

The GOP lawsuit argues the entire ACA became unconstitutional when Republicans zeroed out the fines people used to face under the law’s “individual mandate.” Nearly all legal experts view the case as frivolous, but it’s still coming before the court just as Barrett would potentially get her seat, and after President Donald Trump’s repeated promises to only nominate justices who would overturn the ACA.

Democrats believe Barrett would side with her mentor and boss, the late conservative Justice Antonin Scalia, who ruled twice to strike down the law. It’s an issue they’re tying to the coming elections, seeking to make Republicans pay a political price for advancing a Supreme Court nominee so close to Election Day.

A ruling against the ACA would have far-reaching consequences, including an estimated 20 million people losing their health coverage, the elimination of Medicaid expansion and insurance subsidies, and the abolishment of the law’s protections for people with preexisting conditions.

“Don’t act as if we’re making this stuff up,” added Sen. Richard Whitehouse (D-R.I.) in response to GOP claims that Democrats are simply fearmongering about health care being on the line during the coming Supreme Court hearing.

During Tuesday’s hearing, Barrett dodged questions about how she would rule on the case by saying she didn’t want to prejudge it. However, she acknowledged she ultimately agreed with Scalia’s judicial philosophy.

“I am not hostile to the ACA. … I apply the law, I follow the law,” Barrett said, stressing that she had not had conversations with anyone in the White House about the case.

She added: “I am not here on a mission to destroy the Affordable Care Act. ”

Barrett drew a distinction between the new case and prior Supreme Court rulings upholding the law ― which she has criticized ― because the issue at hand involves analyzing whether a portion of the law is so central to its purpose that the entire rest of the law must fall. The GOP lawsuit argues it is; most legal experts say it is not.

It’s possible that the Supreme Court chooses a middle-of-the-road option, ruling that some of the ACA is severable from the individual mandate ― a result that could lead to some of its provisions surviving while others do not.

Congressional Republicans could have fixed this issue simply by repealing the language in the ACA about the mandate, which is toothless without fines now. They haven’t. Moreover, nearly every Republican senator voted to sustain the Trump administration’s support for the lawsuit seeking to strike down Obamacare in its entirety earlier this month.

GOP senators who staunchly oppose Obamacare and believe that the Supreme Court erred in upholding it openly doubled down on that position Tuesday, blasting Supreme Court Chief Justice John Roberts for allowing its survival. But they, too, claimed that the new lawsuit doesn’t present a mortal threat to Obamacare.

“He rewrote the Affordable Care Act. Not just once, but twice,” Sen. Mike Lee (R-Utah) said of Roberts. “It is inexcusable that he did that.”

“We on this side do not believe Obamacare is the best way to provide health care over time,” Senate Judiciary Committee Chairman Lindsey Graham (R-S.C.) added. “We want South Carolina-care, not Obamacare.”

It’s probably safe to say Republicans are going through rhetorical contortions about the Affordable Care Act and their efforts to do away with it in the courts because the law’s popularity has never been higher, especially its protections for people with preexisting conditions.

Both Trump and GOP lawmakers have sought to reassure the public that they support such provisions, even though they’ve long opposed them and failed to produce alternatives if Obamacare is ultimately struck down.

Wed Oct 14 , 2020
Text size The movie theater industry has been severely hit by business lockdowns and health restrictions on indoor gatherings. (Photo by Tom Cooper/Getty Images) Getty Images AMC Entertainment is scrambling to raise cash as it fights to survive a steep drop-off in attendance and a lack of blockbuster premieres. The […] 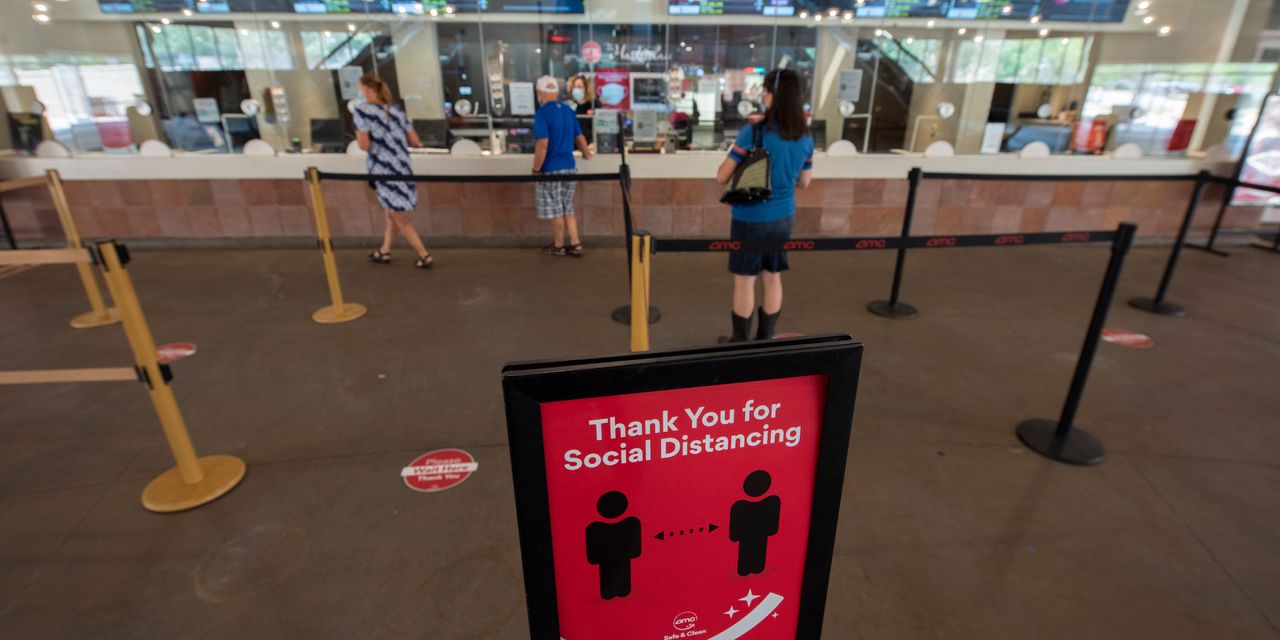