Gracie Abrams (Dania Maxwell / Los Angeles Times) Gracie Abrams’ inaugural live performance — “my first show ever in the history of shows,” as she put it — didn’t go down quite as she’d planned. The 20-year-old singer-songwriter from Los Angeles had been set to play clubs this summer behind […]

Gracie Abrams’ inaugural live performance — “my first show ever in the history of shows,” as she put it — didn’t go down quite as she’d planned.

The 20-year-old singer-songwriter from Los Angeles had been set to play clubs this summer behind her debut EP, “Minor,” an impressive collection of intimately detailed electro-pop songs that show off her delicate melodic flair.

Thanks to the COVID-19 pandemic, those real-world gigs were called off, of course, and replaced by a virtual tour in which Abrams would use Zoom over a few nights to entertain audiences in different cities.

So there she was last week, shortly after “Minor” landed on streaming services, seated behind a keyboard not at the Roxy or at New York’s Mercury Lounge but inside her airy, cream-colored childhood bedroom in Pacific Palisades.

“This is obviously so weird,” she told the 100 or so L.A.-based fans watching her (while muted) on the video call. As her eyes scanned a screen in front of her, she added, “I can’t hear you, but I can see you in the chat.” Then she asked everyone to pose in their respective Zoom windows so she could commemorate the moment with a screenshot.

“At least we’re all in the same time zone,” she said with a laugh.

If the setting wasn’t what she’d envisioned for her first big concert, it was hardly unknown territory for Abrams, who began building an audience a few years ago by posting snippets of performances on Instagram.

Yet what was striking about the show wasn’t merely her ease in front of the camera — one byproduct, perhaps, of having grown up the child of “Star Wars” filmmaker J.J. Abrams — but the assurance of her storytelling as she accompanied herself in hushed solo renditions of tunes like “Stay,” about a couple “trying to forget all the ways that we’re broken,” and “Minor’s” title track, in which she’s bemoaning the fact that her crush lives way over in Glendale. (When she wrote the tune, at age 17, that drive meant she’d never get home before curfew.)

“Gracie lets words fall out of her mouth, effortlessly strums a guitar and a song is done,” said producer Benny Blanco, who worked on “Minor” and has also collaborated with Justin Bieber and Ed Sheeran. “Sounds easy, right? Try it. It’s not.”

Indeed, there’s a writerly streak to Abrams’ music that belies its simplicity; she uses vivid images (broken dishes, a forgotten T-shirt) and unexpected phrases (“half-drunk happy”) to personalize dramatic situations that might otherwise seem familiar. And her whispery singing gives the songs an air of privacy, as though you’re being let in on a closely guarded secret.

Sarah Aarons, an in-demand songwriter who’s helped create tunes for Zedd and Halsey, said Abrams “has that kind of voice that feels like your best friend is talking to you” — a big part of why she was able to make a satisfying emotional experience out of a potentially awkward Zoom concert.

Speaking from her bedroom via the same app a few hours before the show, Abrams said, “Sometimes I feel like a fraud when people have asked me, ‘What’s this project about?’ I’ll watch or read interviews with artists I’ve loved forever, and they’ll go really hard about what the core of their thing is. It sounds so complicated!”

The singer, who wore a baggy black sweatshirt, pushed her hair behind her ears as she flashed an exaggerated expression of worry. “In my head, I’m like, ‘Am I going deep enough? These songs are literally just about how I feel.’”

You can understand her concern. A year after Billie Eilish released her smash debut (and went on to sweep January’s Grammy Awards), music is crowded with talented young female artists — Ashe, Beabadoobee, Benee — using the internet to bring attention to their mumbly, lightly eccentric bedroom pop.

“Billie obviously paved the way for a lot of what’s happening in pop music — that can’t be denied,” said Sam Riback, who oversees pop and rock A&R at Interscope Records and helped sign both Eilish and Abrams to the label. Yet like Aarons (whom he put together with Abrams to write songs for “Minor”), Riback hears a “personal” quality in Abrams’ material that makes her stand out from the other acts redefining what a female pop star sounds like.

“You could even see it in the old Instagram videos,” he said. “The connection she makes — it’s real.”

Abrams, who graduated from Brentwood’s tony Archer School for Girls and counts “Grown-ish” actress Yara Shahidi among her pals, said she’s been writing songs since she was a kid; her parents — her mother is Katie McGrath, a film and television producer who also co-founded the Hollywood gender-equity initiative Time’s Up — encouraged her to keep a journal and introduced her to Joni Mitchell and Elliott Smith. She gave her first public performance as a singer in fifth grade: Christina Aguilera’s “Beautiful,” delivered during a school talent show.

“My mom is so not a stage mom, but she was like, ‘You have to do a song,'” Abrams recalled.

But it wasn’t until she was 13, when she discovered the acclaimed indie-folk star Phoebe Bridgers on SoundCloud, that songwriting seemed like a place she could put her thoughts about love and identity — about the lure of a toxic relationship or the danger in craving another person’s validation.

“To see someone who was so young doing it — it was like, ‘Oh, my God,’” she said. “That type of storytelling and emotion felt out of reach before; it was like it existed in a different time that I was never going to be a part of. Finding Phoebe’s music pulled it into my own world in an immediate way.”

Today the admiration flows both ways. Bridgers, 25, said she’s been a fan since Abrams started posting songs online, “so I get this weird feeling every time she writes something rad or gets great recognition like it’s happening to me.

“Every new song I hear is my new favorite,” Bridgers added.

Last year, after completing her freshman year studying international relations at Barnard College in New York, Abrams took a leave of absence from school to come back to L.A. to focus on music. In addition to Blanco and Aarons, she worked on “Minor” with producer Joel Little (known for his collaborations with Lorde and Taylor Swift) and her boyfriend, Blake Slatkin, with whom she’s been making songs for years.

Though she’s already started writing tracks for her next record (while quarantined with her parents), Abrams insists she’s eager to return to Barnard — assuming, that is, that anyone ever returns to any university. Moving to New York and being around new people, she said, was hugely mind-opening, even — or maybe especially — for a kid who grew up privileged.

In her new material she’s trying to take up some of what she’s learned about “the reality of our society” in the Trump era, as she put it — “the fragility of everything, not only within his administration but within our democracy itself.”

“I talk about this stuff a lot with my parents,” she said, both of whom are prominent Democratic donors.

Asked if broadening her creative scope seems challenging, given that “Minor” succeeds in large part because of its tightly introspective vibe, Abrams nodded.

“I’m glad I spent the time and energy writing about my broken heart on this project, because that was something I really needed to do,” she said. “And I’ll never not write about my feelings.

“But ‘Minor’ feels a little bit like a vacuum. I don’t want to have blinders on going forward.”

Wed Jul 29 , 2020
Most California kids will kick off the 2020-2021 academic year with distance learning due to the coronavirus, but the state’s strict vaccination laws still require students be up-to-date on their shots before starting class. The California Legislature in recent years has passed some of the tightest vaccine mandates in the […] 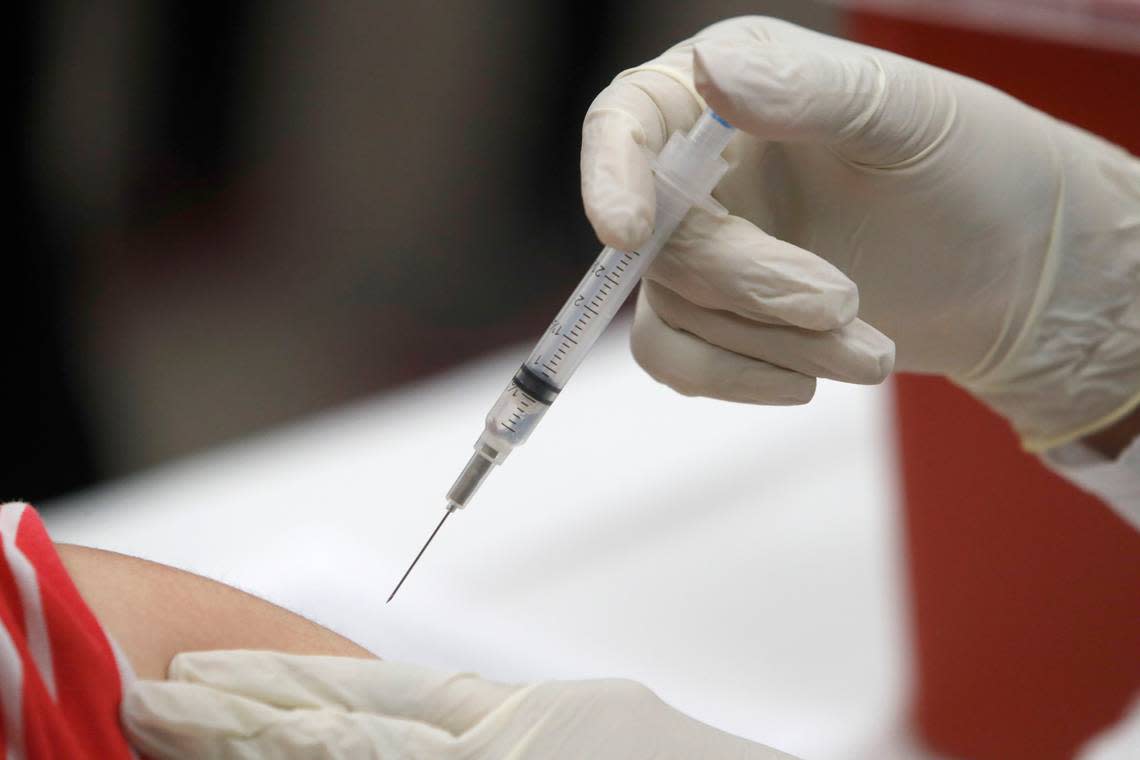