Kate Winslet and Saoirse Ronan in Ammonite. (Photo: Courtesy of TIFF) In most years, September is the time when moviemakers, movie stars, movie journalists and movie lovers alike head to Canada for the Toronto International Film Festival, a weeklong celebration of cinema… and the official launch of awards season. But […]

In most years, September is the time when moviemakers, movie stars, movie journalists and movie lovers alike head to Canada for the Toronto International Film Festival, a weeklong celebration of cinema… and the official launch of awards season. But 2020 isn’t most years. Due to the coronavirus pandemic, this edition of TIFF will be offering a mixture of virtual screenings, as well as outdoor events and limited in-person theatrical showings for Toronto-based film fans.

Outside of select events, American audiences won’t be able to attend TIFF either remotely or in real life: Virtual screenings are exclusive to Canada, and the U.S./Canada border remains closed to travelers. But the festival is still a key part of the moviegoing calendar, setting the tone for the awards season to come by launching high-profile films from past Oscar winners like Regina King, Halle Berry and Kate Winslet.

More importantly, this year’s TIFF is poised to shake off the doldrums of a movie-less summer with films that should reignite interest in the art and magic of cinematic storytelling. Titles like American Utopia, Nomadland and Good Joe Bell are among the high-profile releases looking to nourish film-starved audiences. Yahoo Entertainment has combed through TIFF’s 50-film lineup and offer this curated guide to the movies that demand your attention. — Ethan Alter and Kevin Polowy

Toronto’s fest, along with those in Telluride and Venice, typically marks a coming out party for a whole slew of Oscar contenders. Last year, five of the nine Best Picture nominees (winner Parasite, Ford v Ferrari, Jojo Rabbit, Joker and Marriage Story) screened at TIFF. But with this year’s lineup drastically slimmed down, in part because of its virtuality, it’s fair to wonder if the 2020 version can still be a bellwether for whatever the 2021 Academy Awards will look like. The answer is probably yes, but to a much smaller degree. The Regina King-directed drama One Night in Miami became the first fall festival title to generate Oscar buzz after its premiere at the Venice Film Festival this past weekend, while other titles like Nomadland (starring Academy favorite Frances McDormand) and The Duke (which also stole high praise out of Venice and could be that Philomena-esque contender appealing to older voters) sure fit the bill for what could make the ballot come March (yes, Oscar nominations are not until March).

But first, Spike Lee and David Byrne invite you to get your groove on

Before the awards forecasting starts in earnest, rock out to Spike Lee’s filmed version of David Byrne’s acclaimed Broadway musical, based on his 2018 album and incorporating new versions of some Talking Heads classics. The Da 5 Bloods director is no stranger to bringing stage productions to the big screen: Lee previously rolled cameras on John Leguizamo’s 1998 one-man show, Freak; the traveling comedy show The Original Kings of Comedy (which launched the movie career of the late, great Bernie Mac); and, best of all, a recording of the Tony-winning 2008 musical, Passing Strange, that totally burned down the house. American Utopia is kicking off this year’s TIFF lineup for Canadian viewers, before streaming for domestic festivalgoers as part of the New York Film Festival, which starts Sept. 25. And if you miss out on tickets, don’t worry: The curtain goes up on HBO on Oct. 17.

A trio of veteran actors make their directorial debuts

But what they really wanted to do was direct. Add Halle Berry, Regina King and Viggo Mortensen to the official log of actors-turned-directors. Berry directs herself as a disgraced MMA fighter seeking redemption in Bruised, which The Hollywood Reporter points out could regale fans of the underdog like 2008 Mickey Rourke TIFF title The Wrestler. King lenses a fictional account of a real meet-up between African-American icons Malcolm X (Kingsley Ben-Adir), Jim Brown (Aldis Hodge), Sam Cooke (Leslie Odom Jr.) and Muhammad Ali (Eli Goree) in One Night in Miami. And Mortensen wrote, directed and stars in Falling, a drama that first premiered at Sundance about an elderly conservative man (Lance Henriksen) who moves from his rural farm into the Los Angeles home of his gay son (Mortensen) and family.

Last year, Portrait of a Lady on Fire was the lush period LGBTQ romance on everyone’s lips. In 2020, all eyes (and hearts) are on Francis Lee’s Ammonite, starring Kate Winslet and Saoirse Ronan, which makes its world premiere as part of TIFF ahead of its planned theatrical release in November. The Titanic star plays real-life 19th century paleontologist, Mary Anning, who leads a solitary life on the coast of South England. Enter Ronan’s Charlotte Murchison — the wife of famed geologist, Sir Roderick Murchison (James McArdle) — who strikes sparks with the older woman. Ammonite’s trailer alone was enough to start Twitter swooning, and moviegoers’ love affair with both Winslet and Ronan remains strong after all these years.

Film Twitter rejoiced when Chloé Zhao, the writer-director behind 2018’s slow-burn cowboy drama The Rider, scored the gig helming Marvel’s star-studded 2021 ensemble The Eternals. But Zhao was not making the direct leap from bootstraps-budgeted indie to mega-Marvel money. Only months before she went into production on Eternals, Zhao filmed this slightly higher-budgeted drama about a woman (Frances McDormand) who journeys through the American West in her van after losing everything during the recession. On paper it’s a dream team for two women who’ve played in rural sandboxes before, given Zhao’s work on The Rider and McDormand’s Oscar-winning turns in both Fargo and Ebbing, Missouri.

Along with Tom Hanks and Rita Wilson, Idris Elba gave us one of those first “this is getting real” moments when he announced he had tested positive for COVID-19 in mid-March. Nearly six months later he’ll headline one of the buzziest films premiering at TIFF. In Concrete Cowboy, he plays the horseback-riding father who introduces his estranged son (Stranger Things star Caleb McLaughlin) to a whole new side of North Philadelphia. The film is said to have crowd-pleasing appeal, indicated by TIFF’s recent announcement that they’ll screen it for free online for 500 frontline workers.

The Shia-naissance continues after that Tax Collector drama

Shia LaBeouf’s capped his 2019 career comeback with an emotional TIFF premiere of the acclaimed semi-autobiographical film, Honey Boy, where he played a version of his father. But all that goodwill nearly evaporated over the summer when the actor took a controversial role in David Ayer’s poorly-received late summer thriller, The Tax Collector. Leave it to TIFF to put the pieces back together: LaBeouf stars opposite Hobbs & Shaw scene-stealer, Vanessa Kirby, in the intense drama, Pieces of a Woman, about a couple who has to rebuild their lives after their baby dies in childbirth. The film arrives in Toronto after a successful premiere in Venice where the two lead performers received rave reviews. To put it in McConaissance terms, if Honey Boy was LaBeouf’s Magic Mike, maybe this will be his Dallas Buyers Club.

While his hip-hop and checkered teenage past inevitably follow him, today Mark Wahlberg is a proud family man, as reflected in some of the father of four’s recent work like Daddy’s Home and Instant Family. In the new indie drama Good Joe Bell, he plays a real Oregon man who walked across the country to raise awareness for the bullying his son dealt with in the form of relentless homophobic taunting. It could be a redemption quest for an actor who was on the other end of pain-infliction as a teen, and it could also be a role that nets the actor his third Oscar nomination.

Celebrate midnight in the middle of the day

Any future cult horror favorite worth its (scary) salt makes a pit stop at TIFF’s famed Midnight Madness lineup. This year, the program is launching three international frightfests, starting with Roseanne Liang’s Shadow in the Cloud, which stars Chloë Grace Moretz as a World War II fighter pilot put in charge of transporting a top-secret supernatural object. Also in the Midnight Madness mix is the Canadian-made psychological thriller, Violation, as well as Get the Hell Out, a Taiwanese joyride that’s part zombie movie and part political satire.

The past is prologue in MLK/FBI

For as much as Martin Luther King Jr. is celebrated as a symbol of peaceful protest, rarely does public discourse also include the constant harassment the civil rights icon faced at the hands of the FBI. Sam Pollard’s timely new documentary MLK/FBI seeks to change that. Based on newly declassified files and based on the work of historian David Garrow, the film tracks J. Edgar Hoover’s long plot against King in the ‘50s and ‘60s as the FBI director viewed the activist as a communist threat and used surveillance, wiretapping and blackmail to undermine his cause.

As the lines between television and movies continue to blur, TIFF has followed the lead of other film festivals by carving out space for serialized stories from major networks. Mira Nair’s six-episode BBC series, A Suitable Boy — based on Vikram Seth’s 1993 novel — will serve as the festival’s Closing Night event, and HBO is giving audiences a look at the upcoming Jude Law miniseries, The Third Day, ahead of its Sept. 14 premiere date.

A dream of a reunion

While U.S. film lovers can’t stream most of the films playing at TIFF, they can beam in for the festival’s lineup of reunions, which will be livestreamed on its Facebook and Twitter feeds. Movies getting the reunion treatment include Full Metal Jacket, Lady Bird and Room, with members of the cast and crew of each of those titles in the house. But the most anticipated get-together has to be the 20th anniversary celebration of Darren Aronofsky’s harrowing Requiem for a Dream. The director will be joined by his leading lady, Ellen Burstyn, as well as cinematographer Matthew Libatique, composer Clint Mansell and production designer James Chinlund to describe the process of turning Hubert Selby Jr.’s famously disturbing story of drug addiction into an equally disturbing film. Most folks can only stomach one viewing of Requiem, but we imagine fans of the movie will watch this conversation multiple times.

Schools rarely teach climate change outside of science class. Teachers are changing that.

Fri Sep 11 , 2020
Schools rarely teach climate change outside of science class. Teachers are changing that. There’s a pretty good chance you remember all of those early, iconic lessons learned in school, from the fetching utility of Please Excuse My Dear Aunt Sally to the way your mind was quietly blown with the […] 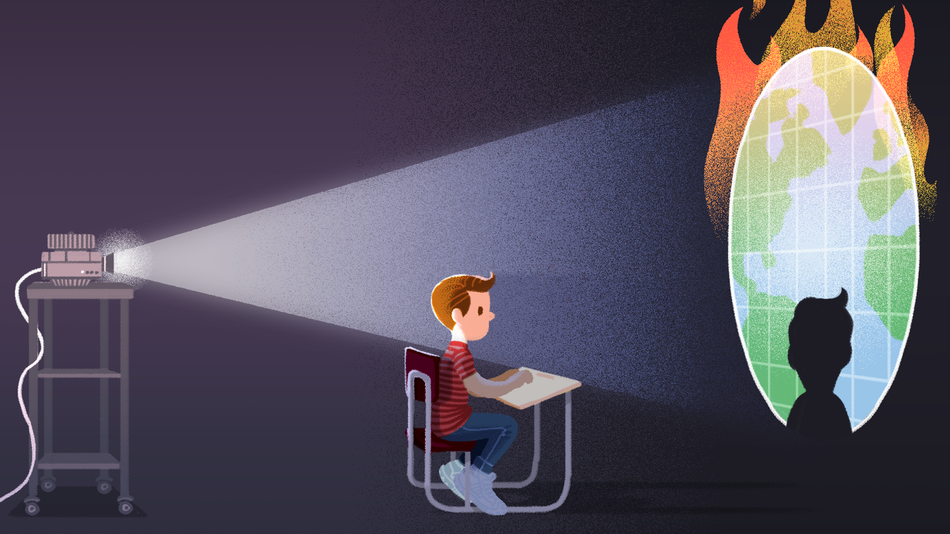