A view of Calitri, Italy on Sept. 18, 2020. (Gianni Cipriano/The New York Times) NAPLES, Italy — Ludovica Tomaciello had never shopped on Amazon before being trapped at her parents’ house in March during Italy’s coronavirus lockdown. Bored one afternoon scrolling TikTok, she spotted hair scrunchies that she then tracked […]

NAPLES, Italy — Ludovica Tomaciello had never shopped on Amazon before being trapped at her parents’ house in March during Italy’s coronavirus lockdown. Bored one afternoon scrolling TikTok, she spotted hair scrunchies that she then tracked down and ordered on Amazon.

When the package arrived, she was hooked. She soon signed up for Amazon Prime and turned to the site to buy a tapestry and neon lights to decorate her bedroom; halter tops, jeans and magenta Air Jordan sneakers; and a remote to wirelessly take selfies for Instagram.

“My mom was like, ‘Can you stop this?’” Tomaciello, 19, who is pursuing a language degree, said while at a cafe near her home in Avellino, about 20 miles east of Naples. When stores reopened in May, Amazon remained her preferred way to shop because of the convenience, selection and prices, she said. One friend even asked her to use it to discreetly order a pregnancy test.

Amazon has been one of the biggest winners in the pandemic as people in its most established markets — the United States, Germany and Britain — have flocked to it to buy everything from toilet paper to board games. What has been less noticed is that people in countries that had traditionally resisted the e-commerce giant are now also falling into its grasp after retail stores shut down for months because of the coronavirus.

The shift has been particularly pronounced in Italy, which was one of the first countries hard hit by the virus. Italians have traditionally preferred to shop in stores and pay cash. But after the government imposed Europe’s first nationwide virus lockdown, Italians began buying items online in record numbers.

Even now, as Italy has done better than most places to turn the tide on the virus and people return to stores, the behavioral shift toward e-commerce has not halted. People are using Amazon to buy staples like wine and ham, as well as web cameras, printer cartridges and fitness bands. At one point, orders of inflatable swimming pools through the site were so backlogged that some customers complained.

“The change is real, the change is deep, and the change is here to stay,” said David Parma, who has conducted surveys about shifting consumer behavior in Italy for Ipsos in Milan. “Amazon is the biggest winner.”

North America is Amazon’s largest market, accounting for about two-thirds of its $245.5 billion global consumer business. But the Seattle-based company has been targeting Europe and other new markets to grow.

Amazon entered Italy in 2010; its first sale in the country was a children’s book. But the company had only muted success over the next decade. Fewer than 40% of Italians shopped online last year, compared with 87% in Britain and 79% in Germany, according to Eurostat, a European Union government statistics group.

Amazon was hampered in Italy by a lack of widespread broadband and poor roads for delivering packages, especially in the south. Italy has the oldest population in Europe, and many people are also wary of providing their financial details online. E-commerce accounts for only 8% of retail spending in the country.

“There were some structural issues that we had to face,” said Mariangela Marseglia, Amazon’s country manager for Italy. “Unfortunately, our country was and still is one of those where technological understanding and tech culture is low.”

The turning point was the pandemic. Parma said 75% of Italians shopped online during the lockdown. Total online sales are estimated to grow 26% to a record 22.7 billion euros this year, according to researchers from Polytechnic University of Milan. Netcomm, an Italian retail consortium, called it a “10-year evolutionary leap,” with more than 2 million Italians trying e-commerce for the first time between January and May.

Hurdles remain for Amazon. Small and midsize businesses are an integral part of Italian society. They make up roughly 67% of the economy, excluding finance, and about 78% of employment, which are higher than EU averages, according to EU statistics.

In Gragnano, a hilltop town near the Amalfi Coast with a 500-year history of pasta manufacturing, Ciro Moccia, the owner of La Fabbrica della Pasta, said Amazon was a “dangerous” monopoly that could destroy businesses like his that rely on conveying the quality of a product.

But during the lockdown, his company had no choice but to sell on Amazon after many stores shut. Standing above the family’s factory recently, where semolina flour was mixed with spring water and pressed into 140 different pasta shapes, Moccia said, “I am very worried.”

His son, Mario, 24, who tried for years to get his father to sell more online, said he saw it as an opportunity.

“If you are not on Amazon, you don’t have the same visibility,” he said.

Amazon’s success has drawn scrutiny. Unions have also criticized Amazon’s labor practices, including staging a multiday strike in March over virus-related safety policies. Italian regulators are investigating it for price gouging during the pandemic. In 2017, Amazon agreed to pay 100 million euros, or roughly $118 million, to settle a government tax dispute.

Marseglia said Amazon was “a lifeline for customers” in the pandemic and provided a new way for businesses to reach people online.

Amazon has rushed to keep up with demand. It plans to open two new fulfillment centers and seven delivery stations in Italy. It also is aiming to hire roughly 1,600 more people by the end of the year, pushing its full-time workforce to 8,500 from fewer than 200 in 2011.

“We are accelerating the rhythm with which we make investments and hire new people,” said Marseglia, who is originally from Puglia in southern Italy.

With unemployment about 9% nationwide — and closer to 20% in areas of southern Italy — many are eager for Amazon to expand.

When Francesca Gemma graduated from college in 2016, Amazon was the only company hiring in her area. She now works at an Amazon fulfillment center picking hundreds of products from the shelves every hour so the goods can be shipped to customers.

“On the first day, the muscles of my legs felt like I had done a marathon — I couldn’t climb up the stairs,” she said. “It’s not for everyone, but it’s a job.”

Gemma, who is also a representative for Cgil, a national labor union, inside the center, said orders had skyrocketed during the lockdown and remained high. But she said that besides some bonuses she received at the peak of the emergency, Amazon did not provide warehouse staff much else to share in its success.

“Nothing remained for workers,” Gemma said, adding that her work has become more monotonous because of the enforcement of the sanitary protocols.

Amazon has made an effort to win over Italians. Parents are encouraged to shop on its website through a program that can steer a percentage of their purchases to their children’s school.

In Calitri, a village of 4,000 people in southern Italy, Amazon sponsored a Christmas festival last year as part of a marketing campaign to show it could reach even the most isolated areas. It paid for a Christmas tree in the town square and provided gifts to children. The mayor hoped it would lead more artisans and farmers to sell through the site.

But Luciano Capossela, a jeweler in Calitri, helped organize a protest of the Christmas festival with other shop owners, who closed their stores for the night and blacked out their windows.

He has watched as the community has embraced Amazon. One customer recently texted him a screenshot of a wristwatch for sale on Amazon, asking if Capossela could match the price. When he said the Amazon price was lower than what he could get from a distributor, the customer never replied.

“If we keep going this way in 10 to 15 years, we will only have Amazon and everything else will no longer exist,” Capossela said. In an area where depopulation is so bad that some property is for sale for just 1 euro, he said last year’s protest was meant as a warning: “A village with couriers and without shops.”

He pulled up a picture on his phone taken the morning after the Amazon festival. It showed that the Christmas tree had blown over in a storm.

Forget Congress. Here's how to get a 2nd stimulus check by DIY

Sun Sep 27 , 2020
Forget Congress. Here’s how to get a 2nd stimulus check by DIY Congress and the White House still haven’t reached a deal to give you a second $1,200 coronavirus stimulus payment like those direct deposits, checks and money orders that went out months ago. Democrats who control the U.S. House […] 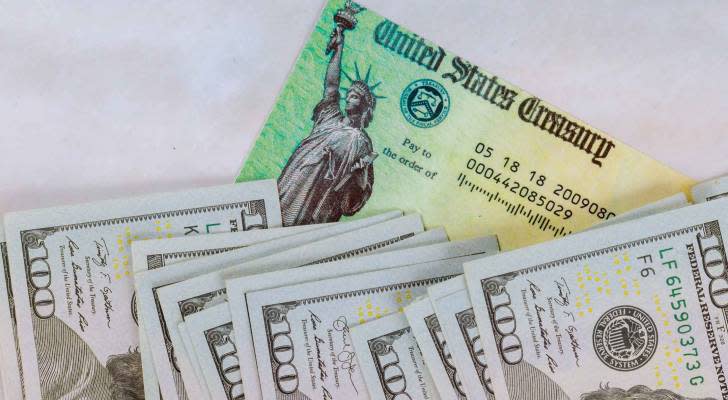