The financial turmoil that crippled Danke Apartment, one of China’s largest online apartment rental platforms, spilled into streets across China in recent weeks as angry tenants clashed with landlords. Now employees are threatening to sue Danke, whose name means “eggshell” in Chinese, over unpaid wages. Danke faces disputes over 3.4 […]

The financial turmoil that crippled Danke Apartment, one of China’s largest online apartment rental platforms, spilled into streets across China in recent weeks as angry tenants clashed with landlords.

The collapse of Danke’s controversial business model sent shock waves through China’s massive rental market and sounded alarms over the online rental industry’s debt-fueled growth. Danke and its competitors rent flats from landlords on long-term leases and then sublet the properties to tenants after making renovations.

These companies are supposed to make money on the premiums they charge tenants over the rent they pay landlords. But to attract tenants and landlords, many companies like Danke have been offering higher rents to landlords than they collect from tenants. To maintain cash flow, Danke and its rivals adopted a business model that requires tenants to pay a year’s rent upfront and encourages them to raise the cash by signing up for rental loans with partner banks. This allows the rental companies to pool tenants’ money to fund further business expansion.

But like many of its industry counterparts, Danke has yet to make any money despite rapid business expansion. It ran into financial difficulties this year amid the pandemic, underscoring the sector’s struggle with thin profit margins and risks stemming from debt-driven growth.

Danke, run by New York-listed Phoenix Tree Holdings manages 415,000 flats across 13 big cities in China. It was one of the upstarts in China’s long-term rental market, which has boomed since 2015 with government support. Beijing has encouraged development of the long-term rental market in hopes of helping urbanization and diversifying the country’s white-hot housing market.

Danke’s financial stress started to emerge earlier this year as the COVID-19 pandemic cooled rental markets. It quickly escalated after the June detention of Gao Jing, Danke’s founder and CEO. Although the investigation of Gao is said to be unrelated to Danke’s business, the incident slammed the brakes on the company’s fundraising, leading to an immediate collapse of the company’s highly leveraged business model.

Angry property owners who failed to collect rent from Danke took action, such as cutting off electricity or water, or changing locks to force out tenants. But tenants said they have already paid rent to Danke, many using bank loans arranged by the company, and resisted giving up their apartments.

The clashes escalated in many major cities, including Beijing, Shanghai, Shenzhen and Hangzhou. Some disputes spilled into the streets, forcing local authorities to step in. People gather at the headquarters of Danke Apartment in Beijing on Nov. 10 in a fight for their legal rights.

Danke employees in several cities said the company’s offices have closed and many workers have not received salaries since October. Some employees are planning to take legal action against the company, one staffer said.

The collapse of Danke and the massive debt disputes have stirred concern over the risks of rental loans arranged under partnerships between lenders and rental platforms. Experts questioned whether WeBank — Danke’s financing partner — did enough due diligence and risk control for loans linked to Danke, and whether the bank should not be held accountable.

Last week, WeBank said it would waive interest payments and extend the loan terms for more than 160,000 borrowers linked to Danke at least until the end of 2023. But several Danke renters who borrowed from WeChat for upfront payments said they were not satisfied with the bank’s offer.

Several local governments stepped in to mitigate the turmoil caused by Danke. Caixin learned that authorities are pushing industry leaders, including SoftBank-backed Ziroom and Beijing 5i5j Real Estate Brokerage, to bail out Danke.

Meanwhile, Danke is discussing a plan with WeBank to convert the debts to equity, people familiar with the matter said. The company is also seeking to raise $150 million yuan to ease its cash crunch, sources said. But no deal has been reached.

The loan partnership with WeBank, which was the core of Danke’s expansion, has become the focal point of the controversy.

Under the partnership, when a tenant signs a lease with Danke they also sign a rental loan contract with WeBank, which pays the tenant’s full-year rent in advance to Danke. Then the tenant makes monthly loan payments to WeBank. To encourage tenants to take out loans, Danke often offers subsidies to reduce their interest. Rental loans — more than 90% of them issued by WeBank — became the main source of cash for Danke. According to a company disclosure, rental loan-backed payments totaled 2.75 billion yuan, accounting for 73.8% of Danke’s total revenue in 2019. That same year, Danke received 980 million yuan of upfront cash payments from tenants.

People with knowledge of the situation told Caixin that Danke and WeBank worked out a plan under the guidelines, aiming to reduce loan-backed rent payments to 40% by the end of this year and meet the 30% requirement by the end of 2021. But Danke’s business reshuffle plan did not go as planned, they said.

To grab market share, Danke offered higher rents to landlords than it collected from tenants in major cities. A document viewed by Caixin showed the company paid 8,500 yuan to a flat owner in downtown Beijing and sublet the property at 7,850 yuan.

In a letter to company executives during his detention, Danke CEO Gao Jing said Danke needed to maintain rapid growth until it reached the stage of sustainable growth and achieved profitability, enabling the company to cut reliance on outside financing.

“But the pandemic disturbed our plan and led to today’s troubles,” Gao wrote.

According to a company report, the 415,000 flats Danke had in operation as of March 31 was nearly double the number a year ago. The company’s operating costs rose 59% year-on-year to 3.1 billion yuan during the first three months this year, while its net loss continued expanding to 1.2 billion yuan. Danke posted a net loss of 3.15 billion yuan in 2019, compared with losses of 1.37 billion yuan in 2018 and 270 million yuan in 2017.

The last straw was the detention of Gao. Danke said on June 18 that Gao was being investigated over previous business dealings that were unrelated to Danke. In his letter, Gao said he was probed for violations by an advertising company where he worked in 2014.

But the incident cut off Danke’s access to equity financing and bank loans, a person close to the company said, a significant blow because of the company’s reliance on financing.

Analysts said the financing partnership between Danke and WeBank revealed significant risk. In practice, renters sign a contract with WeBank to apply for individual rental loans and authorize the bank to make payments to Phoenix Tree Holdings.

“Rental loans are targeted to individual borrowers, but the money is used by the company,” said a bank executive. It means the bank has no right to monitor how the funds are used as it doesn’t have a loan contract with Danke, the executive said.

“Such a loan model has loopholes in risk control, and almost no big bank is willing to do it,” he said.

Several banking sources said they are surprised that WeBank became so deeply involved in the riskier rental loan business with Danke as the bank has sound profitability. In 2019, WeBank reported 3.95 billion yuan of net profit and 14.9 billion yuan of revenue, topping all private banks

Caixin learned that WeBank also worked with rental business leaders Ziroom and Beijing 5i5j in rental loan partnerships. The bank said it monitors the partners’ financial and business disclosures closely for risk control and requires the companies to put up 5% to 8% of the total loan value as a provision against loan losses.

In the agreement with Danke, WeBank also limited the use of rental loans to paying landlords and related spending. Danke promised to return funds to the bank if contracts with tenants are terminated early. But analysts said it is difficult for the bank to monitor how Danke used the money.

Although no agreement has been reached on a solution for Danke’s loan disputes with clients, some legal experts said WeBank should also assume part of the responsibility because of its flawed weak risk control.

Cai Zhen, a real estate industry expert at the National Institution for Finance & Development, said the renters’ loan obligations should be transferred to Danke for WeBank to claim its debts.

Tue Dec 8 , 2020
The venerable holiday home tour in Southeast Portland’s tree-lined Eastmoreland neighborhood will be viewable online to make it easier for everyone to safely and leisurely explore private residences adorned in festive décor. Viewers of the 42nd Duniway Holiday Home Tour will see stylish ways to decorate for the holidays, smart […] 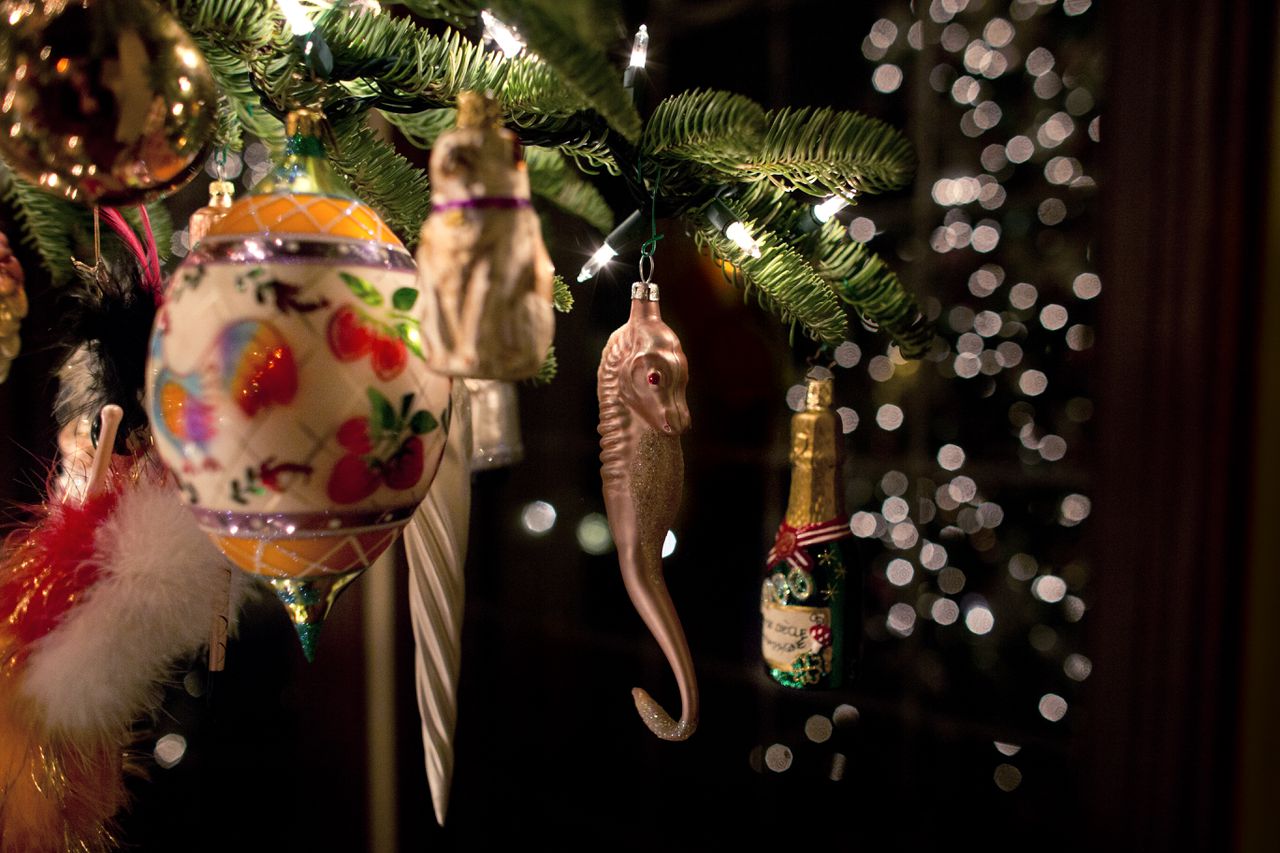