Chelsey Gao’s grandmother is 84, has myriad health issues, speaks no English and has not left home at all since the pandemic revved up. Mother and daughter, then, are the designated emissaries to the outside world. Gao, 23, headed to Ohio in January for a new job as a data […]

Chelsey Gao’s grandmother is 84, has myriad health issues, speaks no English and has not left home at all since the pandemic revved up.

Mother and daughter, then, are the designated emissaries to the outside world. Gao, 23, headed to Ohio in January for a new job as a data analyst, and had big plans to travel internationally with friends on her “new adult income.” But after the coronavirus tightened its grip on the U.S., she moved back home to live with her mother and octogenarian grandmother in the Atlanta suburbs.

“I just figured it would be a lot easier to be able to be back home with a support system,” Gao said. “Being isolated was not an ideal situation.”

Her 53-year-old mother, who was born and raised in China, received unemployment after being furloughed in March. That cushioned the blow, but she still worried: “If the unemployment lasted for longer, or perhaps she was laid off from her job, she [felt] comfortable knowing that I could provide [financial] support for our family,” Gao said.

They are among the ranks of Asian Americans who live in multigenerational homes — a tradition in some cultures and one increasingly complicated by the threat of a pandemic that’s taken a unique and multifaceted toll on the Asian American and Pacific Islander community.

A Pew Research study found 29 percent of Asian Americans lived in a home with two or more adult generations or grandparents and grandkids under 25 in 2016 — more than other ethnic groups. By comparison, 27 percent of Hispanics, 26 percent of Blacks and just 16 percent of whites had that kind of setup.

Living in crowded quarters can be difficult enough in normal times. Throw in a deadly virus, and the situation gets even more demanding.

“When you live in a mixed-generation household, or even a household with folks who are considered higher risk, [it’s] very different than if you are just social distancing, being careful, but you don’t have a grandma who could die if she caught the virus. So there’s a lot more at stake,” says Sung Yeon Choimorrow, executive director of the National Asian Pacific American Women’s Forum, a nonprofit focused on policies to help women and girls.

The numbers tell a painful story: Data analyzed by The Marshall Project shows Covid-19 has had a disproportionate effect on the mortality rate among Asian Americans: From January to July, deaths increased 35 percent over the 2015-19 average, compared to a 9 percent rise for whites. (Other ethnic groups have also seen dramatic jumps, including a 44 percent increase among Hispanics, 31 percent among Blacks, and 22 percent spike for Native Americans.)

Why is the mortality rate from the coronavirus so high for Asian Americans? Lots of reasons, says Grace Ma, a professor and founding director of the Center for Asian Health at Temple University.

AAPI undertesting for Covid-19 is a real problem, Ma says. She points to a roster of issues: Inability to social distance in crowded multigenerational homes. High-exposure jobs in sectors such as health care. Underlying chronic illness, language barriers and a debunked “model minority” myth that continues to mean a lack of attention to the community’s disadvantaged status. There’s also anti-Asian discrimination that fosters distrust of reporting and contact tracing.

“I think there are a lot of barriers in access to care, and people just don’t talk about it. When the system [does] not have the languages, they can’t even get across the point of making appointments — let alone to get testing and treatment — unless they’re so sick and they end up in the emergency room,” Ma says.

Asian Americans aren’t even mentioned in some recent discussions of equitable distribution of a future coronavirus vaccine, Ma said that the bottom line is that “Asians oftentimes are neglected, and we have to fight for it.”

Barriers exacerbated by Covid-19 extend to getting by in the battered U.S. economy, Choimorrow said — and again, the challenges can be tougher for AAPI, including immigrants living in multigenerational households.

In May, according to a Pew study, the adjusted unemployment rate for Asians was 20.3 percent — higher than for whites and Blacks and on par with that of Hispanics. The problem may be even worse: “When you think about the fact that 29 percent of Asian Americans live in [an] at least two-adult-generation households, not everybody is bringing in income,” Choimorrow says, “and so there are more people whose livelihoods depend on your income than a standard nuclear family.”

Some AAPI families have members with different immigration statuses. That brings some people real pause when they consider asking for government help, because benefits may not always be available to mixed-status households. Heated and confusing rhetoric surrounding immigration adds a fear factor: “At a time where people really need [to] lean on public benefits,” Choimorrow says, “they’re not — because they’re afraid of either losing their chances of becoming a citizen, or that their family member might get deported because of them.”

When Asian Americans do choose to reach out for help, language barriers can complicate everything from signing up for business loans and unemployment benefits to getting basic news and educational support, Choimorrow says: If government forms confound the native English speaker, how much do nonspeakers struggle? If parents must work and kids are cared for by a grandparent with limited English, how do they help with homeschooling assignments — or even talk to customer service if the internet goes down — when help in Asian languages is limited?

“In Asian American households, not [to] generalize, but I think many of us come from cultures where putting family and community before yourself is highly valued,” South Korea-born Choimorrow said. “We come [from] very communal cultures. And so those things are expected of young people right now.”

When the coronavirus pandemic heated up in the spring, Christy Wang of Brooklyn took action to protect her family: She limited grocery runs to once a week, enforced constant hand washing and sanitizing, and switched to working from home. She started buying portable alarms as security against Covid-19-related racist attacks on Asian Americans

Stocking up on these items meant buying for her husband, teenage daughter and her mother.

“There is so much to worry about… Every time you go out, you worry,” Wang told NBC Asian America — and that concern extends to the older and younger generations of her family, even as she continues her own work as an accountant: Is her daughter keeping her mask on when she’s at the park with friends? Is her mom taking precautions against exposure to the virus when she rides the subway to Chinatown to see her doctor?

Wang’s daughter, Catrina, will study online this fall while her parents work from home and her Cantonese-speaking grandmother helps with the cooking and chores. Having everyone together 24/7 during the pandemic, she says, means tight quarters and less privacy.

With a child’s innocence, Catrina’s take on pandemic life sums up what many families like hers are facing in a broader sense.

“Sometimes it’s a little chaotic,” she said. “A lot of things all just happen at once.”

For Gao, her role as translator even before the onset of the pandemic took on heightened importance. Although her mother can communicate in English, Gao says she’s still acted as family interpreter in dealing with utilities or doctors: “I think the biggest help I have [been] is just helping with language barriers.”

Her family, including her grandmother are aware of the incidents of anti-Asian bias.

“She’s also very scared,” Gao said. “We basically go to the Chinese grocery stores every weekend and we pick her up the newspaper, so she is also very aware of how serious the situation is.”

Gao and her mother stick together on shopping trips and walks, and remain concerned by reports of rising anti-Asian harassment and violence amid the pandemic.

“We live in a relatively white area, [and] so I think we do feel a little anxious… Thankfully, everyone has been friendly, but we’re just never sure what could ever happen, because [my] mom and I both read the news,” Gao said. “I [have] other AAPI friends who are in Tennessee, and I have another friend who has a mother living in a more rural area of Georgia, and I know we all shared concerns about our parents going out … We do a lot of our shopping at Asian grocery stores, so I think that’s also kind of made us feel more safe.”

Choimorrow pointed out women carry more of the mental and physical caretaking load. “There are various reasons why women bear a larger burden, and people were talking about it pre-pandemic.”

And within multigenerational homes, women are often sandwiched in between guarding both kids and parents against the coronavirus.

“If you think about [it] in the context of multigenerational families … the parents are having to carry this burden of deciding that they have to go back to work and put their elderly parents at risk,” Choimorrow said.

Women are also sacrificing more with regard to child care specifically.

“The country is asking people to make decisions that no one should really have to be making,” Choimorrow said. “But that’s that’s a reality for so many Americans — and over 30 percent of Asian American families living in the U.S.”

For some Hollywood investors, the pandemic opened new doors

Mon Sep 28 , 2020
Tom Cruise in Paramount Picture’s “Mission Impossible: Fallout.” (Paramount Pictures) When the eagerly awaited “Coming to America” and “Mission: Impossible” sequels hit theaters this year and next, Brian Oliver will see his company’s credits onscreen in a way he says wasn’t likely before the pandemic. Last month, the 49-year-old Oscar-nominated […] 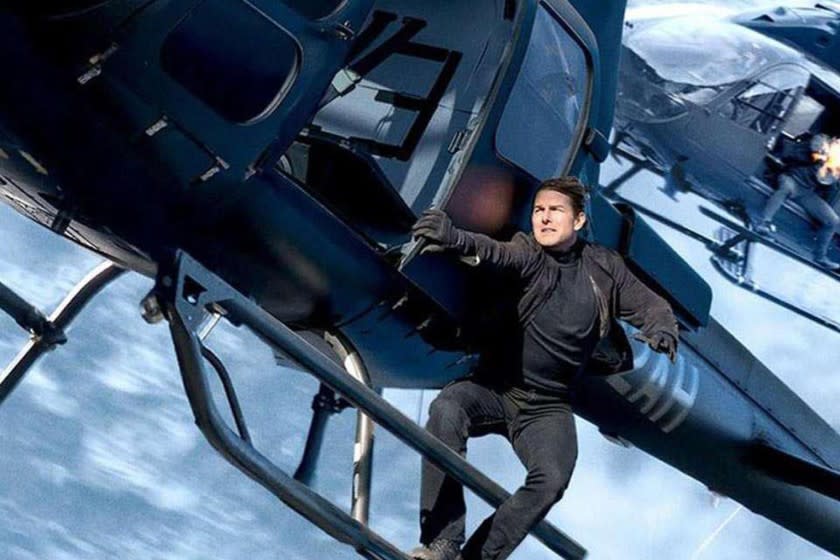