Action stations: Dover is expected to be extremely busy as travellers race to get home before quarantine takes effect: Port of Dover Hundreds of thousands of British holidaymakers in France, Malta and the Netherlands, and many more with plans to visit these countries, face two weeks in self-isolation when they […]

Hundreds of thousands of British holidaymakers in France, Malta and the Netherlands, and many more with plans to visit these countries, face two weeks in self-isolation when they return.

As a result of new soaring coronavirus cases in some parts of these countries, they have been stripped of their “quarantine exempt” status by the Department for Transport (DfT). In addition, the Foreign Office warns against non-essential travel.

Monaco, Aruba and the Turks & Caicos Islands are also off the “safe” list.

These nations now join Spain, Portugal, Belgium and many other countries as effectively off-limits to many UK travellers.

What has changed – and why?

These countries have seen sharp increases in cases of coronavirus over the past few weeks. As a result, the Joint Biosecurity Centre and Public Health England advised ministers to apply the government’s double-lock, intended to dissuade British travellers from venturing to specific destinations with high risk of infection.

Anyone who is in either country faces two weeks of self-isolation when they return to the UK.

Outbound travellers are warned against going to any of the countries because they presenting an “unacceptably high risk” to British citizens.

When does this take effect?

At 4am on Saturday 15 August, for England at least. It is expected that the other UK nations will apply the same deadline but in the past they have sometimes set their own deadline.

If you are in one of the affected countries, to avoid quarantine you must arrive back in the UK nation in which you live by the stipulated time.

How many travellers will it affect?

The Independent calculates that there are at least 500,000 British holidaymakers in France at present, plus hundreds of thousands other UK citizens who are semi-permanent residents.

The Dutch capital, Amsterdam, is the main attraction in the Netherlands. The country’s beaches and canal network are popular with UK families. Around 50,000 British holidaymakers – and some business travellers – are estimated to be in the Netherlands.

In addition, many British travellers drive through to or from Germany, Scandinavia and Poland.

In a normal year, half-a-million British holidaymakers visit Malta, but it is believed that there are no more than 20,000 on the island at present.

Will I be able to change my flight/train/ferry/Eurotunnel shuttle to return in time?

It is unlikely. The 30 hours between the announcement of quarantine and the measure taking effect gives some scope to get home. But Friday is usually very busy for crossings, and Saturday even more so: it is the key travel for holidaymakers returning from France, but almost all of them are booked on services that arrive well after 4am.

Most motorists use the key short-sea ferry crossings from Calais and Dunkerque to Dover, and Eurotunnel from Calais to Folkestone.

If the thousands of cars that are due to depart during the day on Saturday instead turn up on Friday, travel chaos could result.

Eurotunnel has warned that anyone arriving at its Calais terminal without a confirmed booking will be turned away.

A spokesperson for the car-carrying operation said: “In light of the change to quarantine requirements for UK travellers returning from France, Eurotunnel Le Shuttle would like to advise customers currently in France, and hoping to return early, that they must amend their tickets online at www.eurotunnel.com, before travelling to the French terminal.

“The service is already very busy this weekend and there is no additional capacity. To avoid long queues and severe disruption we strongly advise against turning up at the terminal outside the allocated time.

“Customers will be unable to board alternative shuttles without a valid booking.”

Ferries are operating at reduced capacity through social distancing. Eurostar is running a reduced service. There is nothing like the normal number of flights operating, with relatively few seats.

Seats on the British Airways flight from Paris CDG to Heathrow on Friday quadrupled in price after the government’s announcement.

Space on flights from other French cities quickly filled. The two-hour BA flight in mid-afternoon from Nice to Heathrow was selling at €854 (£772).

What does quarantine involve?

Arriving travellers must go direct to their home or to other suitable accommodation (by public transport) if necessary and self-isolate for 14 days, timed from the day following their arrival.

Quarantinees, as they are known, can leave home only for medical assistance, to attend court or a funeral – or to go shopping for essentials if there is no one else who can supply provisions.

Going out to work, exercise, socialise or walk the dog is not permitted.

The only way to shorten quarantine is to leave the UK again. If you choose to do this, then you must go direct from your place of isolation to the transport terminal for your outbound journey.

I am a key worker. Am I exempt?

Almost certainly not. Most of the quarantine exemptions are very narrowly defined and cover either transport professionals or staff travelling from abroad to the UK specifically on government business. Holidays do not count.

Can I take a Covid test instead?

No. The government insists there is no viable alternative to quarantine. But Heathrow airport and others are pushing for a system involving a sequence of tests that could reduce the length of self-isolation.

What is the effect of the Foreign Office travel warning?

It is only advice, and many travellers have been ignoring the existing warnings for Spain and Portugal. But anyone who goes to a country against FCO advice risks invalidating their travel insurance.

While some in the travel industry claim that cover still applies for incidents unrelated to coronavirus, the Association of British Insurers says an insurer would argue that a policy term on travel against FCO advice is at the heart of the insurance contract, and so any claim arising from a visit to that country would be rejected.

While the European Health Insurance Card (Ehic) is still valid for medical care in France, the Netherlands and Malta until 31 December 2020, it covers only state treatment – and does not cover cost of any emergency repatriation back to UK.

I have a flight/ferry crossing/holiday planned in one of these countries. Can I get a refund?

Travel companies, faced with yet deeper financial harm, are considering their positions.

Package holiday firms have previously always cancelled outbound trips when the Foreign Office warns against travel, and given full refunds, but this principle is now being legally tested by some companies.

The easiest case is flight-only customers with British Airways, which will allow travellers to cancel for a voucher (not a cash refund) in line with its current terms.

Other transport operators may offer some flexibility, but Ryanair’s stated policy is best summed up as “use it or lose it, or pay to change it”.

On Eurostar, you will not get a refund but you can postpone your journey – for free if you do so at least 14 days in advance, though you must pay any increase in fare compared with what you originally paid.

With less than 14 days’ notice there is an exchange fee per person and per individual journey in standard class of £30 (£40 in standard premier).

I am travelling back via France or the Netherlands by rail or plane. Must I quarantine?

Yes. The government says: “You’ll still need to self-isolate if you’ve visited or made a ‘transit stop’ in the previous 14 days in any country that is not on the list.

“A ‘transit stop’ is a stop where passengers can get on or off a coach, ferry, train or plane.”

The same applies to anyone changing planes in the key aviation hubs of Paris or Amsterdam.

I am driving through from Germany. What happens if I drive nonstop to a Channel port?

That is allowed, as long as no one gets in or out of the car. The government says: “You don’t need to self-isolate if you travel through a non-exempt country and you don’t stop in the country.

“If you do make a stop, you don’t need to self-isolate if no new people get into the vehicle [and] no-one in the vehicle gets out, mixes with other people, and gets in again.”

The closest point to the Channel ports is the city of Aachen. From here to Calais (mainly through Belgium, also on the no-go list) takes around three-and-a-half hours.

Who knows? Quarantine is now regarded as the “Martini menace” because the obligation for travellers to self-isolate can be brought in “anytime, any place, anywhere”.

Concerns have been mentioned for Croatia and Poland, but the Czech Republic and Iceland look more likely candidates.

What effect will this have on the travel industry?

It will cause yet more damage to airlines, ferry and rail firms, and holiday companies.

After Spain was placed off-limits by the UK government’s announcement on 25 July, France became by far the most popular country for British holidaymakers. Companies offering Channel crossings – ferry firms, Eurotunnel and Eurostar – will be extremely badly hit by the France change.

He said: “It threatens what little remains of an already disastrous summer season. Our only hope is that holidaymakers visiting our French destinations follow the stoicism of those who have travelled with us to Spain over the last fortnight.

“Despite quarantine restrictions on their return to the UK, only around one in five of those who booked have cancelled or changed their travel plans. Of course, what this will mean for future bookings remains to be seen.”

More widely, the frequent abrupt changes in go/no-go rules are unsettling for travellers to any part of Europe or the wider world. Instead of joyful anticipation, they feel uncertainty and anxiety – especially for those who cannot take the chance of being stuck the wrong side of a sudden quarantine directive.

When will quarantine be lifted from these and other countries?

Paul Charles, chief executive of travel consultancy the PC Agency says: “The in-or-out system of quarantine has to change. It creates confusion and fear, and puts off economic recovery.

“It also suggests Britain is closed to the outside world in the run-up to Brexit. The government needs to invest in regular world-class testing as other countries have done.”

Fri Aug 14 , 2020
WASHINGTON (AP) — President Donald Trump frankly acknowledged Thursday that he’s starving the U.S. Postal Service of money in order to make it harder to process an expected surge of mail-in ballots, which he worries could cost him the election. In an interview on Fox Business Network, Trump explicitly noted […] 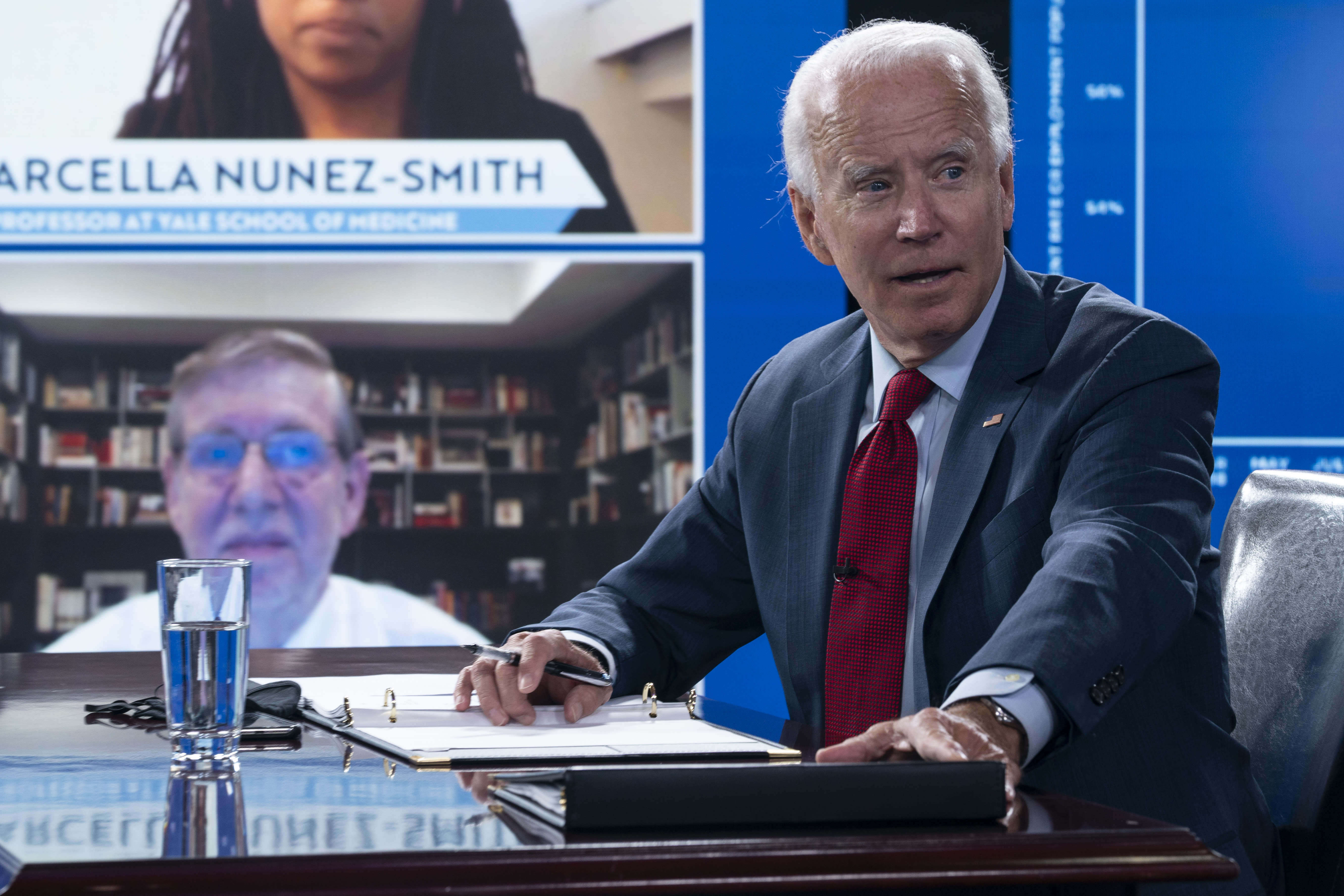