It looked to be a typical college party: a small group of students crammed in a kitchenette, cheering on as a shirtless guy arm-wrestled a laughing young woman. No one wore masks. The scene was posted on Snapchat by one of the partygoers, a first-year student at Cornell University, along […]

It looked to be a typical college party: a small group of students crammed in a kitchenette, cheering on as a shirtless guy arm-wrestled a laughing young woman. No one wore masks.

The scene was posted on Snapchat by one of the partygoers, a first-year student at Cornell University, along with a selfie with a mocking caption: “The people who slide up saying ‘you’re not social distancing’ are the ones that wouldn’t have been invited anyway.”

The response was swift and severe. Within days, an online petition was created demanding that the student’s admission to Cornell be revoked, and in the week since, the petition has collected more than 3,500 signatures.

“Cornell University is attempting to take the biggest feat of allowing all students back on campus. This cannot be done without immense safety precautions taken and the compliance of every student,” a group calling itself the Concerned Student Coalition wrote in the petition. “We need to hold these students accountable for their actions.”

The situation at Cornell underscores a deeper tension on campuses all over the country as about 1,100 colleges embark on the huge experiment of reopening in a pandemic. Students, returning to school after months of isolation, are not only being asked to fully reimagine what their college social lives look like, but also to assume active roles as the front line against an outbreak at their schools by policing campus safety.

“Nobody likes snitching — it’s not comfortable,” said Melissa Montejo, a sophomore at Cornell who signed the petition. “I really am not one to go around and tell people what to do, but for me, this was troubling. Three months of being careful and not engaging in problematic behavior is worth saving a life.”

Jessica Zhang, the student who posted the party scene to Snapchat, said she had apologized and met with Cornell officials. Neither Zhang or Cornell would say whether she was disciplined.

In recent weeks, the coronavirus outbreak has spread swiftly on college campuses. The New York Times has tracked thousands of cases that were linked to returning students. Several schools, including the University of North Carolina at Chapel Hill, Notre Dame and the State University of New York College at Oneonta, suspended in-person classes after more than 100 students at each campus tested positive, often after large parties.

As a result, growing numbers of college officials are realizing that there are limits to what they can monitor on their own — and are calling on students to help.

Colgate University sent students a memo encouraging them to report classmates who violate social-distancing guidelines and to include names so action could be taken. Similar instructions were sent out at schools across the country from the University of Colorado Boulder to the University of Pennsylvania. Yale University and some other colleges have hotlines in place for reports of risky activity.

It’s an extraordinary situation, and students face a quandary: Report parties to campus officials? Or keep quiet and hope for the best? As one freshman said at Hunter College, which has a dorm open even though classes are remote this semester: “I don’t know if I’d want to narc on people I’m trying to become friends with.”

For those in the middle of it, the choice is not as simple as they might have expected.

“Before coming here, I remember thinking ‘Yeah, I’ll definitely report people if they’re going to parties,’” said Kyle Duran, a freshman at Binghamton University in upstate New York. But after spending just a few days on campus, Duran had second thoughts. “It’s a lot harder to want to when you’re living and going to class with everyone.”

Some faculty members at schools have warned against asking students to police their peers. They have said doing so could disrupt student life when classmates are pitted against one other, particularly when the consequences for breaking the rules can be harsh.

SUNY Plattsburgh, for example, placed 43 students on interim suspension last week after a large outdoor gathering. Fifteen others at Marist College, a small liberal arts school in Poughkeepsie, New York, were recently sent home for not following rules at an off-campus party, while at Ohio State University, more than 200 have been suspended for similar reasons.

Ariana Rebello, a freshman at Hofstra University on Long Island, said hearing about those punishments at other schools has dissuaded her from attending parties, but also from reporting her classmates. “I don’t think I could bring myself to snitch. I just wouldn’t associate with them,” she said.

In states with high virus counts, many administrators said they worried that college parties could accelerate an all-but-inevitable rise of clusters on their campuses. But in the New York metropolitan area, which has largely continued to stem its own outbreak, the concerns carry a different weight.

Some epidemiologists said they feared that college parties and large social gatherings could lead to a resurgence of the virus in places like the New York region that have kept case counts low.

“The biggest concern is that you are going to have newly infected people leave these parties and disperse back into their communities,” said Dr. Stephen Thomas, an infectious disease specialist at SUNY Upstate Medical University. “It’s that they’re going to be sources for continuing to spread the virus and it’s going to reverse the work that has already been done.”

Many students say they have more self-interested reasons to report their peers. On TikTok and other social media platforms, videos have gone viral in which students say “snitching” on their classmates would be an easy choice because of how much it costs to attend their colleges.

But for others like Cambria Kelley, a first-year graduate student at New York University, the issue is more personal. Kelley, who is from California, said several members of her family contracted the illness over the last few months, including her grandmother who died in July.

NYU has asked students to “politely urge” their classmates to wear masks and socially distance and to report those who violate that advice to school officials. And despite the friendships she may form with her classmates, Kelley said she will still feel an obligation to do so, keeping her family in mind.

“If it was bad enough, I wouldn’t hesitate to report them,” Kelley said. “I’m not going to be having my life put at risk because people decided to be selfish. These rules are for the good of everyone here.”

Some students, however, said deciding whether to report classmates involves a different calculation.

As a national conversation erupted on the role of police in cities following the killing of George Floyd, groups at schools including Vassar College, Stony Brook University and Columbia University called on their institutions to rethink their relationships with campus and local police.

Now they are wrestling with the prospect of relying on those departments to disperse and crack down on large gatherings.

Maggie Peng, a senior at Syracuse University, said she plans to approach friends one-on-one to have conversations about the risks of partying. She even wrote a lengthy message in a Facebook group for first-year students urging them to take social distancing more seriously after a large outdoor gathering that drew hundreds.

But Peng said shifting the responsibility for keeping one another safe from individual students to campus police was troubling. She and other students at the school said that since large social events occurred two weeks ago, they have noticed more officers than usual monitoring residential spaces and common areas.

Peng said the role of campus security in enforcing rules would dissuade her from reporting her classmates.

“It just doesn’t make sense to rely on campus police for enforcing these rules,” Peng said. “Especially when there has been so much tension, it’s hard to want them involved. Anything bad that happens will usually involve students of color.”

As the first weeks back on campuses shift into the more regular pace of the fall, the question remains: Just how long will students, many of whom arrived in New York state to a mandatory two-week quarantine, continue to follow their schools’ physical-distancing guidelines?

Some officials at large universities in particular worry parties, especially those off campus, could slip by undetected.

For now, the students who are caught attending them face harsh punishments as a warning to others.

Zhang, the first-year student at Cornell who posted videos of a party to Snapchat, said in a recent interview that she deeply regrets both the “lapse in judgment” she made by attending the gathering and her “insensitive comments” afterward.

“Incoming freshmen come in with heavy expectations, we all want to find our people,” Zhang said. “I’m not proud of those posts, they show me at my worst.”

Since her posts spread on social media, Zhang said she has received hundreds of threats, with much of the heaviest criticism coming from classmates.

As classes at Cornell begin this week, there may soon be an additional layer to complicated tensions students face when reporting one another: Zhang could end up sitting in the same row of her first college lectures as those who called for her expulsion.

No Summer Vacation This Year? What to Do with the Money You’ve Saved

Wed Sep 2 , 2020
From spring through summer this year, we’ve seen travel get disrupted by COVID-19. Some countries have even banned international travel to help contain the virus.  Place most of the money you were going to spend on a trip this year into a safer interest-bearing account — and use the rest […] 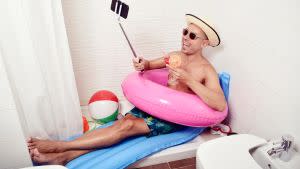